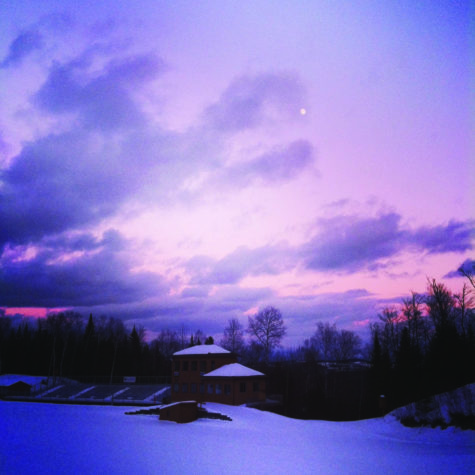 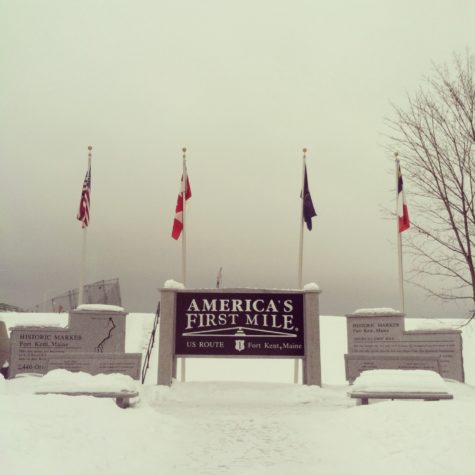 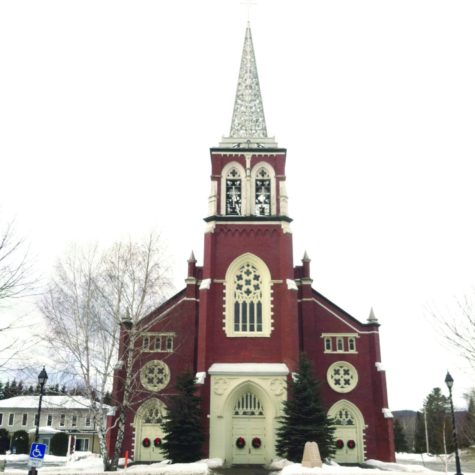 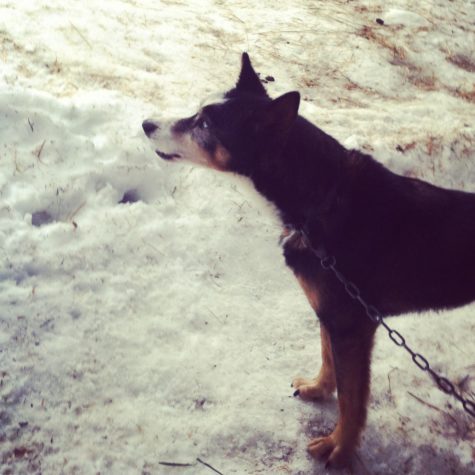 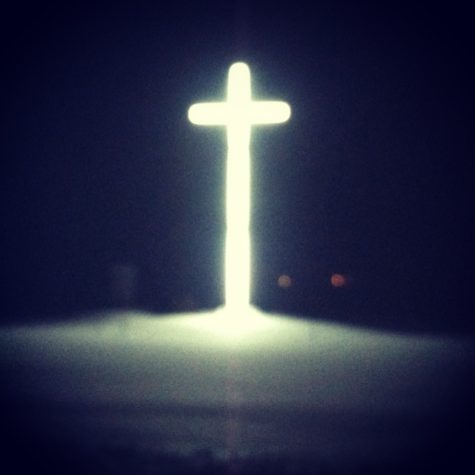 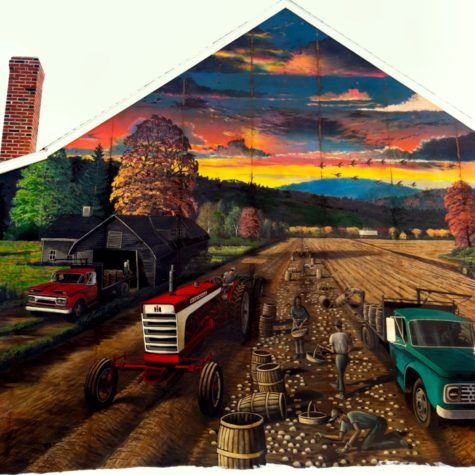 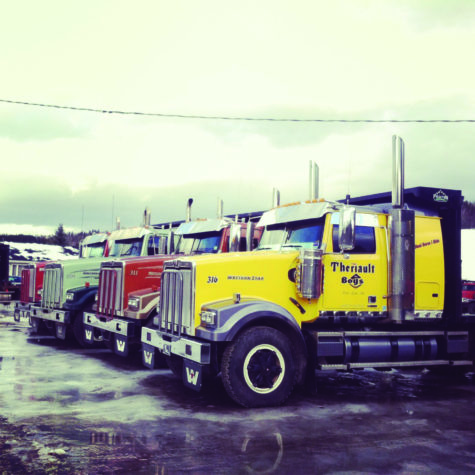 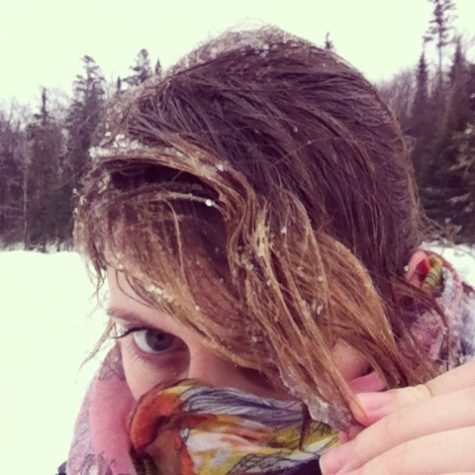 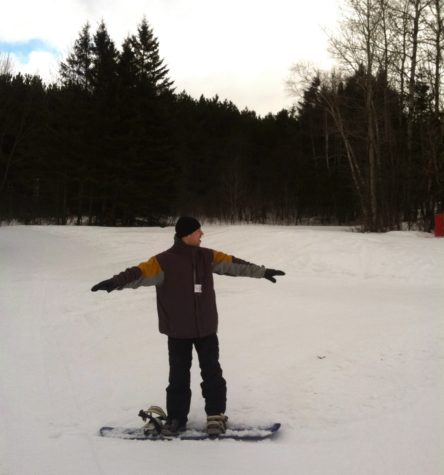 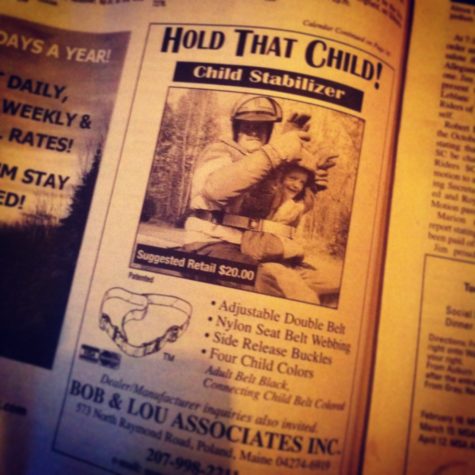 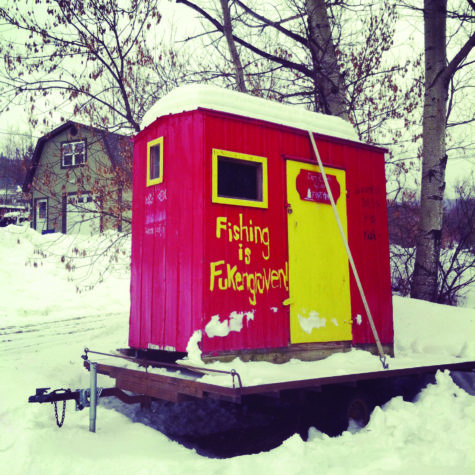 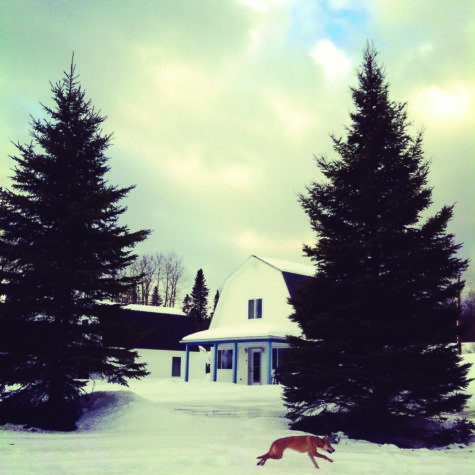 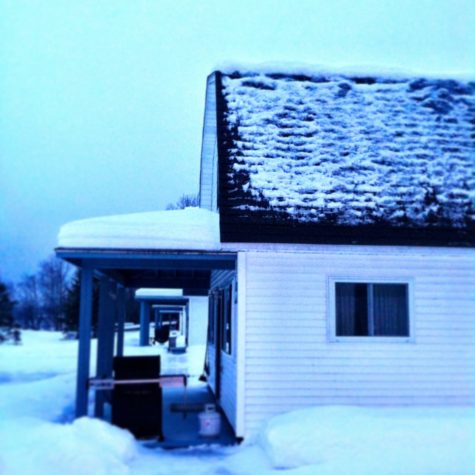 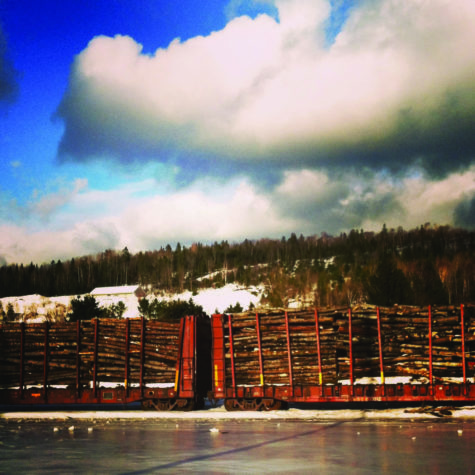 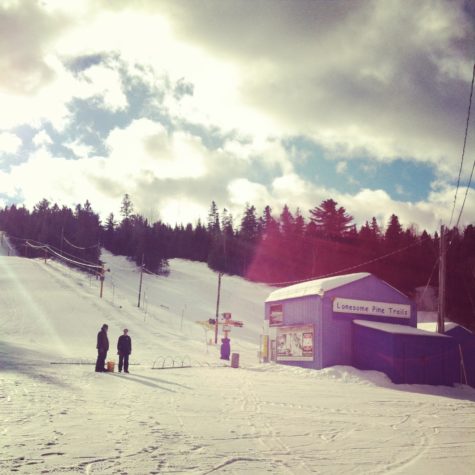 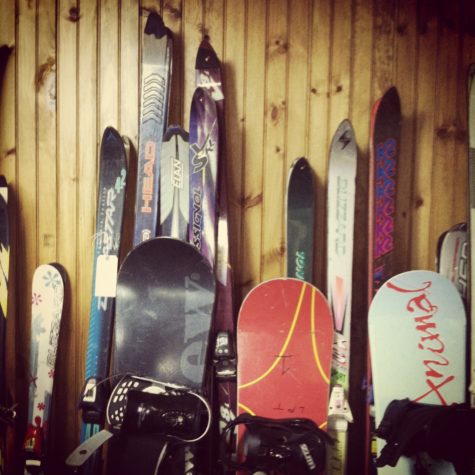 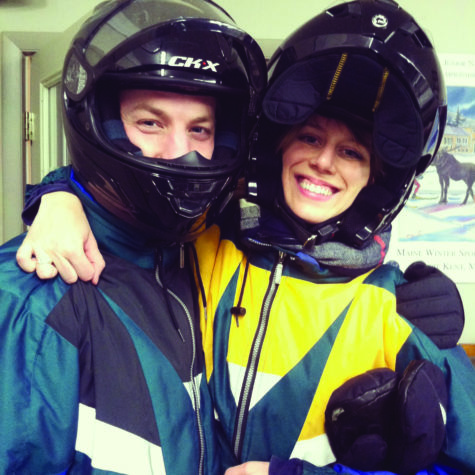 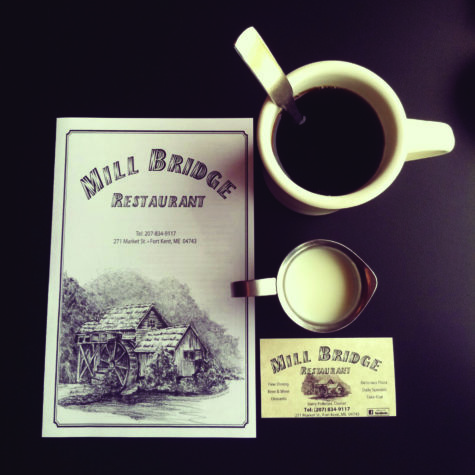 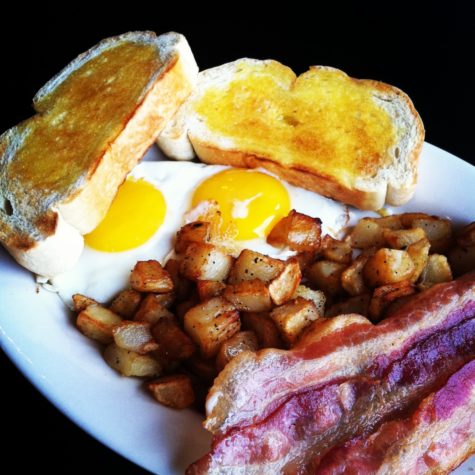 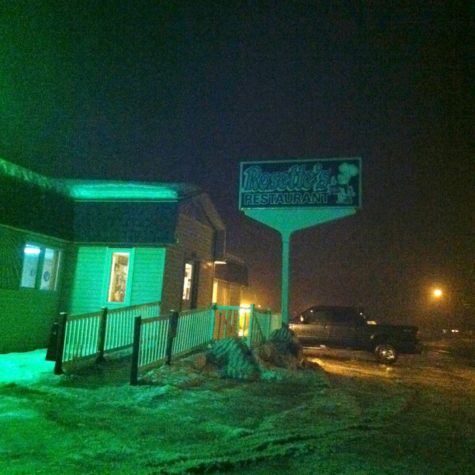 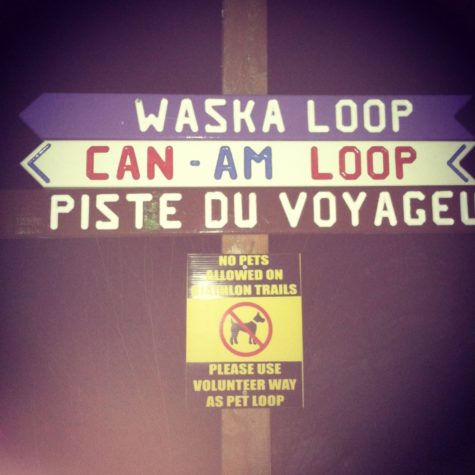 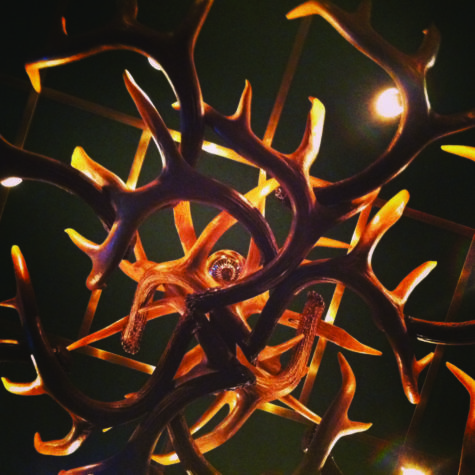 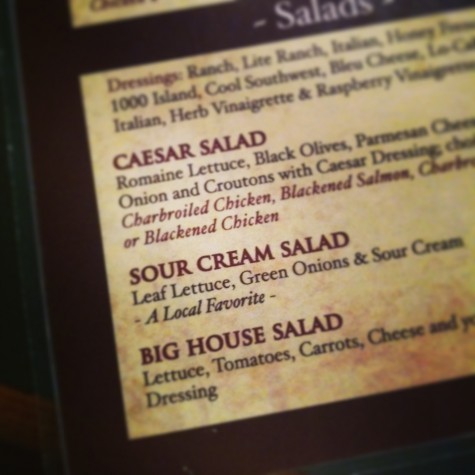 Aroostook Country is remote and wild, beautiful and vast. It’s up north, way up north, where the Canadian border is just a stone’s throw away and houses are scattered like dice on a game board. There is something about “The County”, that I find so intriguing. Past Bangor, the speed limit shifts to 75 miles per hour and the few trucks that are on the road cruise with brights on to better spot wandering moose. I press harder on the gas pedal as my boyfriend and travel companion, Garrett, sleeps in the passenger seat and our two dogs slumber in the back.

Off Route 11, I notice dozens of snowmobiles clustered around a large, log cabin-style building. We don’t even get inside before we’re asked by an open-faced guy with a broad Maine accent and a slight smile, “Where are you coming from?” We tell him Portland, and that we’re looking to find some food and rent a snowmobile, in that order. Michael whips out a silver flip phone and begins making calls. “You still renting? What about you?” As for the food, he directs us to two places: Swamp Buck and Bee-Jays. “Bee-Jay’s is more of a bar, but I’m headed there later. I just turned 21 today,” he tells us. I promise to buy him a beer.

Swamp Buck is no longer serving food, so Bee-Jay’s it is. We dig into the perfectly greasy pizza and hot wings with gusto. It’s not long before I find myself chatting with the bartender, the patrons, and pretty much anyone who walks in the door. The vibe here is unlike anything I’ve ever experienced. Every person I talk to is friendly, ready to share local lore or a bit of advice. There’s a healthy sense of pride, but an equally impressive sense of humor. Statements are made with wry smiles, and offers are extended with complete sincerity. After a few beers, I end up accepting one offer: to “ride snowmobile” with a couple we just met. “Now?” Garrett asks. “Why not?” George shouts, clapping him on the back, and off we go.

Snow-covered spruces and spindly pines become a blur as we fly down the trails. Wind bites my face and I hold on tightly to George. A man I just met is ferrying me through the darkness at 40 miles per hour in a remote location; I feel lucky, exhilarated, and a little afraid. I later learn that George is George Dumond, a writer for the local paper, and Kelly is Kelly Martin, president and board member at Lonesome Pine Trails. The four of us spend hours cruising across ice and snow. We stop on a hilltop and gaze down at Fort Kent. A black ribbon runs through the twinkling lights of buildings and cars. George tells me it’s the St. John River, which separates us from our neighbors to the north.

It’s late when we arrive at our cabin, but before I fall into the comfortable queen-sized bed, I take a moment to admire the well-outfitted space.

I set my alarm for the sunrise, and although I’m groggy and sleep-deprived, I don’t regret it for a minute. The view from our front porch is phenomenal; I watch as the frozen surface of Eagle Lake, punctuated by ice shacks and crisscrossed with tire marks and snowmobile trails, blushes hot pink and fades into dawn.

Garrett and I wolf down hearty helpings of eggs and hash browns. We’re headed out to ski, so we’re going to need all the calories we can get.

We say good morning to Kelly and she introduces us to a few of their youngest skiers, including a two-year-old who is getting his first lesson today. The mountain may be small, but they have a great crowd. Since Garrett and I didn’t bring equipment, we rent a pair of cross-country skis.

I’ve only been on skis once before, but I assume that I’ll pick it up quickly. Nope. On the upside, the scenery is beautiful and the trails are impeccably maintained. Fortunately, the grim weather has kept away the elite athletes who usually train here, leaving only Garrett to witness my failure of coordination.

Any residual traces of ice and embarrassment are washed away by the strong, spicy bloody marys at Swamp Buck. A basket of fried zucchini spears and an overstuffed Reuben sandwich disappear in minutes.

I deposit Garrett and the dogs back at the cabin and head out for a drive. It’s still sleeting, but I want to check out the ice fishing shacks that create a miniature town on the surface of Eagle Lake. Eighteen miles long, this massive body of water is shaped like an L, with a narrow bend in the middle. On the northern leg of the lake, houses and camps abound, but on the eastern section, there are very few structures. The land around the lake was historically owned by lumber companies, and much of it is still wild and impenetrable. Few roads provide shore access, so in the warmer months, those seeking game or solitude can find it only by boat. As I learned from Phil, owner of the Overlook Motel, the Jalbert family still owns several remote camps along the shore.

The regulars at Bee-Jay’s recommended Rosette’s, so we drive east along the St. John and into Frenchville for dinner. I order stir-fry chicken, and Garrett gets a huge portion of fried fish. Both are tasty, in that homey, sleep-inducing way.

We’re the only ones here when we arrive, but within minutes, the entire place fills up. Morning mass must have just let out. Fort Kent is a very Catholic community, with the church playing a central role in social scene. The rhythms of life—even the ebb and flow of Main Street traffic—are still shaped by the ancient institution. Having grown up Catholic myself, I feel an even stronger kinship with this small Maine town.

Garrett heads off to test the ski tow on his new snowboard, but I stay indoors to chat with Kelly. I had mentioned my interest in dog sledding, and she gives me the number of a local journalist who also happens to own a team of Alaskan huskies. After two rings, Julia Bayly picks up, and in typical Aroostook fashion, invites me to her house for coffee.

On the way to Julia’s farm, I find myself stopping repeatedly to take pictures. I’m amused by America’s First Mile marker, amazed by the intricate filigree steeple on the 130-year-old church, and captivated by Darren Connors’s mural of farm life in the County. In the same parking lot as this massive painting, I observe massive stacks of timber waiting to be transported, and a row of shiny, colorful trucks ready to do the job.

Several miles outside town, I finally make it to Julia’s. I open the door and let my two dogs, Rex and Deja, out to greet her team. Excited barking fills the air—I don’t think I’ve ever seen Deja (a retired sled dog herself) quite this happy. Inside, Julia serves me black coffee and tells me stories about her time racing in the Can-Am Crown International. Originally from Oregon, Julia moved to this neck of the woods for college, met her husband, and decided to stay. He passed away from cancer years ago, but Julia wasn’t left alone. Her neighbors rallied around her, plowing her driveway, checking in regularly, making sure she didn’t want for anything. I can’t explain how honored I feel to hear her story. And yet, I’m not surprised. Every encounter I’ve had in Fort Kent has been like this—honest, kind, and intimate. It’s almost enough to make me want to stay here, too. Before I leave, Julia invites me up for this year’s Can-Am. “You can sleep on the couch,” she offers. I might just do that.