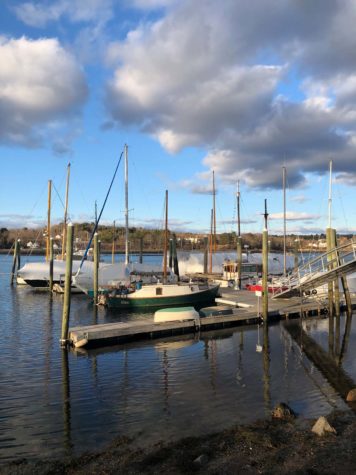 Boats tied up in Belfast’s harbor, located at the mouth of the Passagassawakeag River. 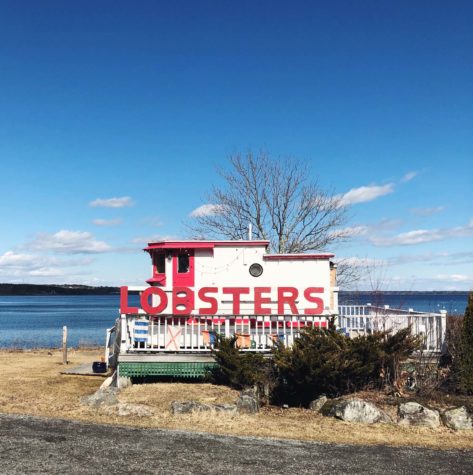 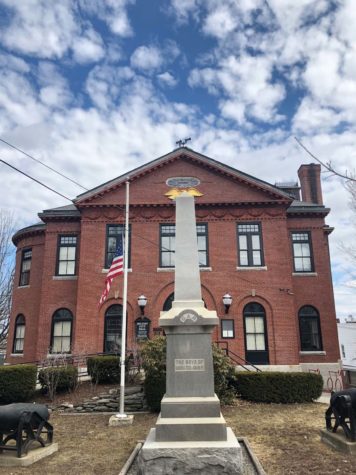 Belfast City Hall, built in the 1850s, is part of the Belfast Historic District. 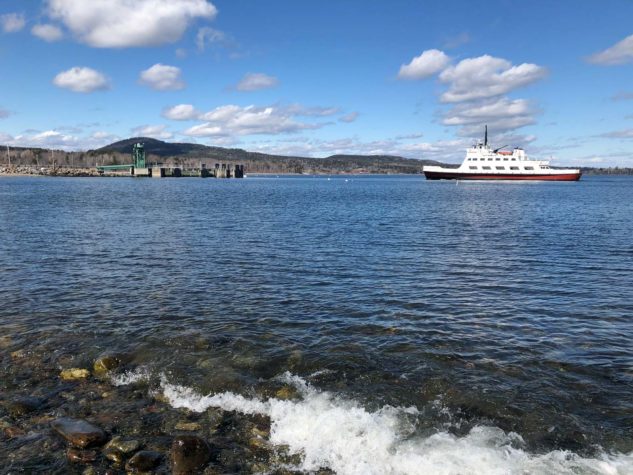 The Margaret Chase Smith, which carries passengers the three miles between Islesboro and the mainland, arriving at the terminal in Lincolnville. 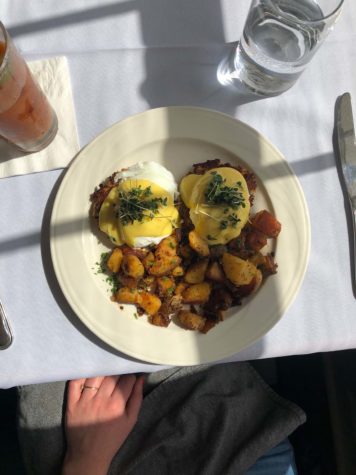 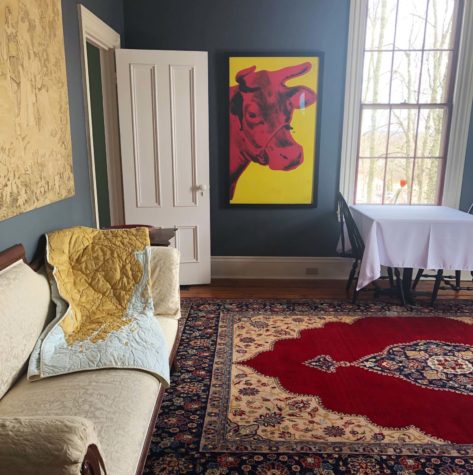 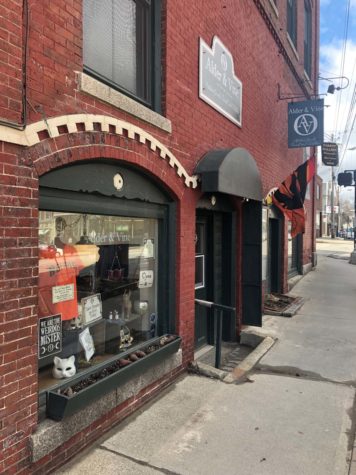 Alder and Vine describes itself as a store that specializes in “artisan goods, oddities, and occult items.” 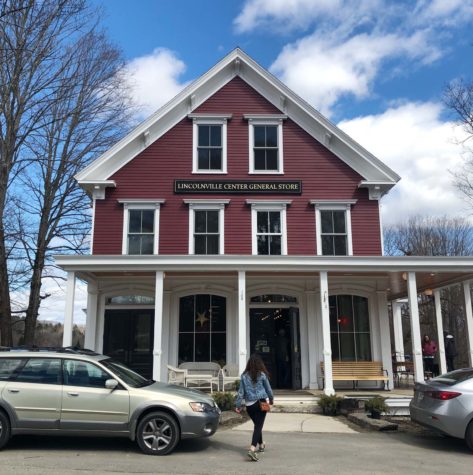 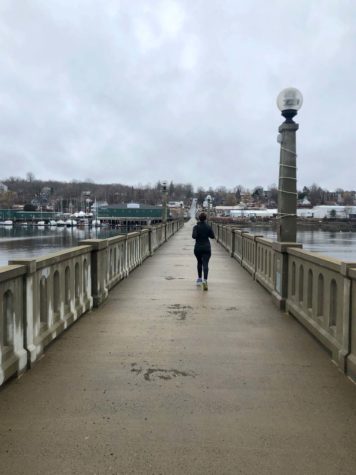 Running across the Armistice Bridge toward the Belfast Harbor Walk. 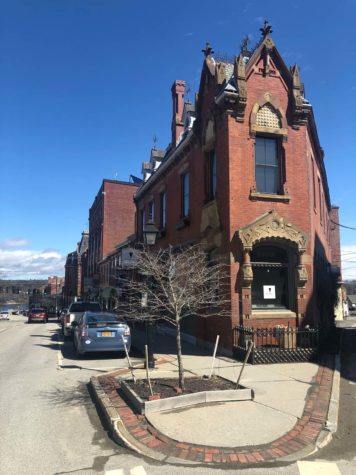 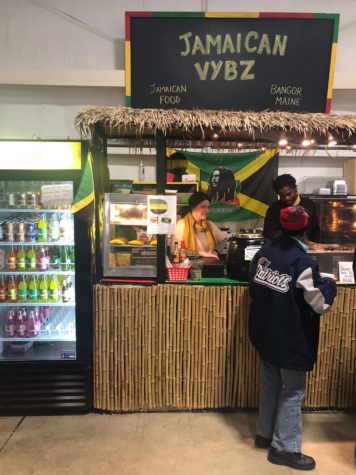 The United Farmers Market of Maine has a variety of vendors including Jamaican Vybz, a Jamaican food stand. 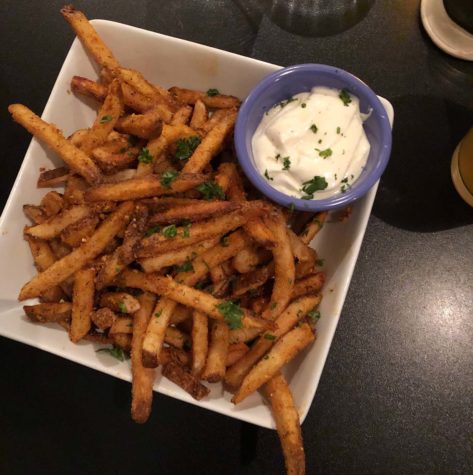 Neighborhood’s signature Belgian-style fries, which are dusted with Parmesan cheese and herbs and served with garlic aioli. 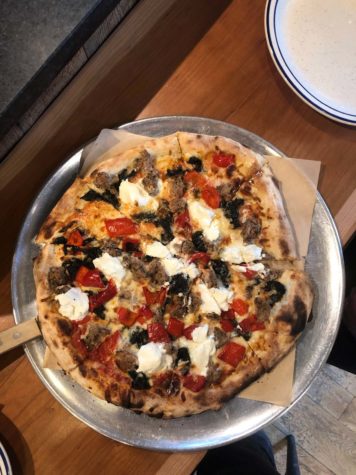 wood-fired pizza from the Lincolnville General Store with caramelized onion, prosciutto, and arugula.

This region of the midcoast offers an enjoyable and laid-back coastal escape with lots of walking trails and public lands to explore, plus a variety of dining options.

The home base for our weekend getaway, the Belfast Bay Inn, is conveniently located downtown. The Main Street inn has recently transitioned to offering year-round vacation rentals equipped with amenities for longer stays, including in-room laundry. My fiancée, Caroline, and I check in with the exterior keypad, and find our third-floor suite with views of the downtown and Belfast Bay.

Our destination for dinner, Neighborhood, is just around the corner from the inn. Owners Seth Whited and Sarah Waldron previously operated a popular food truck, and the menu still includes many of the original favorites. We start with the signature Belgian-style fries, which are dusted with Parmesan cheese and herbs and served with garlic aioli, and for entrees, we split barbecue pulled-pork tostadas with beans and rice and bulgogi beef tacos. Both are rich and delicious examples of the restaurant’s strength: unexpected comfort food with plenty of flavor.

We start the day with a run on the Belfast Harbor Walk and Belfast Rail Trail, a pair of connected trails that cover more than three miles along the Passagassawakeag River. The route starts at the Belfast Boathouse near downtown, goes past a footbridge that crosses the river, and ends at a trailhead near Belfast and Moosehead Lake Railroad’s station. After running through Front Street Boatyard and by large yachts undergoing work outside, we double back and end our run downtown.

Hungry after our run, we head straight to Chase’s Daily. The Belfast mainstay, which was named last year as a James Beard semifinalist for Outstanding Restaurant, has shifted its model to more counter service and fewer full-service meals. I order the egg sandwich with scrambled eggs, cheddar, chives, and hot sauce on a biscuit, Caroline orders an onion and stilton tart, and we split a pumpkin tart. The restaurant also sells bread and other baked goods and produce grown at the Chase family farm.

We stop in our room to change before walking to the United Farmers Market of Maine. The year-round market has a diverse range of vendors, from traditional vegetable farms to woodworkers and other craftspeople to cooks selling Jamaican food. We pick up some soppressata from Smith’s Log Smokehouse, triple-cream brie from Springdale Farm, and a loaf of wood-fired bread from Tinder Hearth.

Downtown Belfast has a unique mix of stores, and we start at The Sail Locker, a nautical-themed home goods and gift shop. Owner Meg Reilly uses traditional maritime ropework to create a variety of items, including coasters and keychains, and sells products by other makers. Man on Main, a men’s clothing store that offers custom suiting and tuxedo rentals, also sells quality casual clothing and accessories. Across the street, The Good Table sells fine cooking and kitchen equipment. Its upper floor has an excellent selection of cookbooks, including a handful of Maine-themed titles.

Up the street on the next block, Eat More Cheese is well known for its cheeses, but it also has a thoughtful selection of wine and specialty foods. We pick up a bottle of the Ewing Fruit Project, a wild-fermented fizzy blueberry wine from one of our favorite wineries, Oyster River Winegrowers in Warren. Our last stop downtown is also the most unique: Alder and Vine, a store that specializes in “artisan goods, oddities, and occult items.” Inside, we find animal skulls, bones, and other deceased specimens, along with Charles Manson paraphernalia and spell-casting supplies.

On our drive to Lincolnville Center, we pass the Ducktrap River Preserve, a 1,140-acre property with a 5.6-mile round trip trail. A couple of cars are parked at the trailhead, but it’s in the middle of mud season, so we plan to come back this summer. Lincolnville General Store is known for its wood-fired pizza, so we grab seats at the counter and order a caramelized onion, prosciutto, and arugula pie. Along with pizza, the general store sells house-baked breads and other baked goods, prepared foods, and groceries.

Ready for a walk after our big lunch, we drive to Lincolnville Beach. The small, sandy beach has views of Islesboro, which is reached by ferry from the nearby terminal. Nearby are a few casual seafood restaurants that open in the summer. After relaxing by the ocean for a while, we drive about 20 minutes to Threshers Brewing Company in Searsmont. Located inside a former lumber mill, this brewery is popular among locals and has a lineup of a half-dozen easy-to-drink beers. There’s a food truck on-site selling burgers and poutine, but we stick with drinks: Citra IPA, a West Coast–style IPA, and Ponderosa, a smooth amber ale.

Evening
Dining and drinking by the harbor

After driving back to Belfast and relaxing in our suite, we walk down to the waterfront. Caroline’s father and stepmother live in Stockton Springs, and they’re meeting us for dinner with her sister at Three Tides. We order mussels for the table, and Caroline and I split a hearty portion of chicken quesadillas. All the beer is from the restaurant’s adjacent brewery, Marshall Wharf Brewing Company.

Before going back to our room, we stop next door at Front Street Pub, which has an extensive beer selection and occasionally hosts live music and other events. Tonight is quieter than most, and a few people are playing pool in the other room.

We start our day at Moonbat City Baking Company, a popular bakery in a former house. Not wanting to fill up on baked goods, we grab coffees and split a flaky and airy chocolate croissant.

After walking down to the Belfast Harbor Walk and across the footbridge one last time, we drive up the coast on Route 1 through Searsport to Stockton Springs for brunch. Owners Charlie Zorich and Kirk Linder opened The Hichborn a year ago in a historic house that was built in 1849 by shipbuilder Nathan G. Hichborn and was later used as a bed and breakfast. The elegant but simple interior features artwork by Stockton Springs artists. For brunch, Caroline orders crab cakes benedict and a Bloody Mary, and I get the quiche with sundried tomatoes, chevre, spinach, onions, and side of potatoes. The quiche is perfectly cooked—light and flavorful with a barely set eggy custard.

We stay in Stockton Springs and continue on to Fort Point State Park. It is open May 15 to October 15, but visitors in the off-season can park outside the gate and walk in (or cross-country ski in during the winter). Overlooking Penobscot Bay, the historic site has an interesting history. During the French and Indian War, English colonists built a fort that rebels later burned down early in the Revolutionary War. In 1872, a luxury hotel was built on the site, but it failed and burned down in 1898. Now, the property has picnic areas, trails that lead to the water, and a dock for arriving by boat. The lighthouse, established in 1834, was the first river light in Maine. The current tower and keeper’s house, which is still used as a home, were built in 1857.

On our way back home to Portland, we stop in Belfast at a newly opened downtown business: Perennial Cider Bar and Farm Kitchen. The bar serves heritage hard ciders, many from New England, and small plates that utilize local ingredients. There are usually around 24 different ciders available, including from High Ridge Farm, which hosts Friday taco nights from June to October in nearby Montville. I don’t recognize most of the ciders, but co-owner and chef Khristopher Hogg pours a few for us to try. I especially like a dry and complex cider from Vermont-based Fable Farm Fermentory, which tastes closer to a wine and less like the mass-produced variety found at most bars. As we leave, we discuss plans for returning to Belfast and Lincolnville this summer, when the beach is more inviting, and the seasonal restaurants and shops open their doors to visitors. 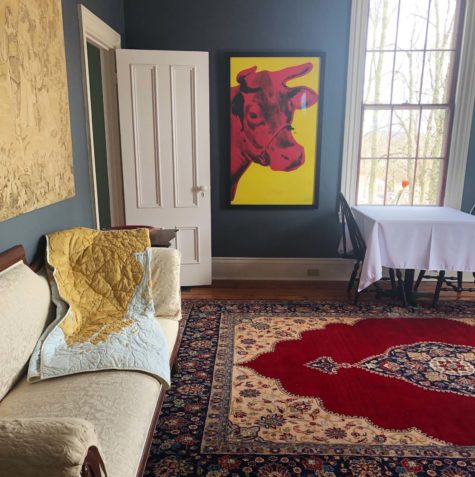 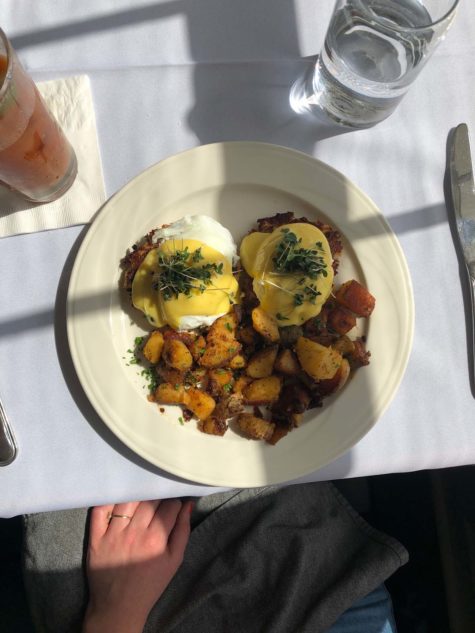