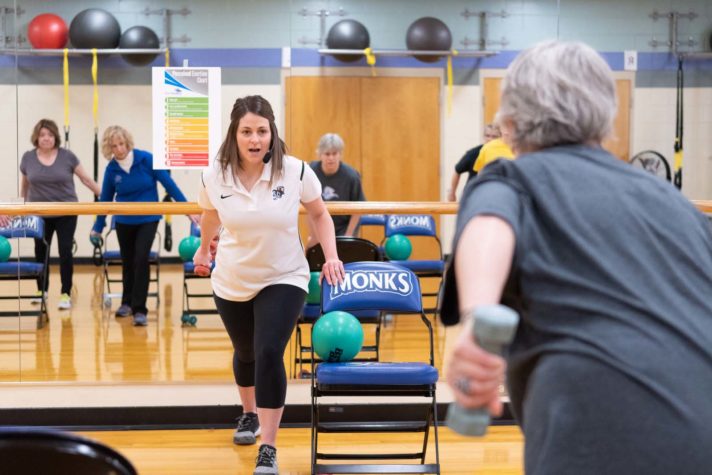 With its Institute for Integrative Aging, Saint Joseph’s College aims to bring seniors and students together for the common good.

A newcomer making a midmorning visit to the Harold Alfond Center at Saint Joseph’s College in Standish might be surprised to see a number of older faces among the students using the fitness facilities. In February, Saint Joseph’s became one of 17 locations in Maine to host the SilverSneakers program, a national initiative for people aged 65 and older, offered at no cost through many insurance plans. The targeted fitness classes, offered three mornings a week, are just the most recent example of the college’s commitment to its older neighbors. Seniors are invited to swim in the Alfond Center pool (which also offers an aqua fitness class), have lunch in the dining hall and coffee in the campus cafe, walk the campus’s network of trails, and use the library. All of this is a precursor to an even bigger plan to integrate older adults into the college community. Called the Institute for Integrative Aging—a term coined by Saint Joseph’s President Jim Dlugos—it is part of an ambitious strategy expected to positively impact the future of the college itself.

Founded in 1912 by the Sisters of Mercy, Saint Joseph’s is a Catholic liberal arts college with 1,000 students on 474 acres bordering Sebago Lake. While similar small institutions across the country face financial challenges due to declining enrollment, Saint Joseph’s has a history of embracing innovation to broaden its impact beyond campus; it was an early adopter of distance learning and today has a robust online degree and certificate program. In 2014, the board of trustees approved a strategic plan that outlined three major goals: to provide more educational opportunities for current and future students, to respond to Maine’s emerging economies, and to develop revenue streams to sustain the college for the long term.

To implement the plan, the college is developing initiatives in three enterprise areas—food systems, hospitality, and aging—overseen by entrepreneur in-residence and director of mission-aligned businesses Peter Nielsen. “Our approach is inspired by the work that has been done in integrative healthcare; it involves the spiritual life, intellectual life, health and nutrition, and careers of older adults,” says Nielsen of the Institute for Integrative Aging. “It’s nonjudgmental; we want to help put people in the driver’s seat with the dashboard in front of them so they have individual agency over their longevity and may make the decisions that benefit their lives.”

Nielsen identifies four specific initiatives under the institute’s umbrella, the first of which is already underway via the fitness programs and opening up the campus to local seniors. The institute also intends to work on what he calls “outbound connectivity” to address the issue of rural isolation for older Mainers. Educational programming, including short, noncredit courses designed for a wide array of learners serving aging populations, is another of the four prongs. Exercise science faculty are now developing a certificate program in senior fitness training, and a program in senior residential design is also in development. “Helping contractors and builders learn how best to meet the needs of Maine’s older population is a huge piece of the economic development that will come from this longevity economy,” says Nielsen. The fourth initiative will address this need even more directly: Saint Joseph’s plans to build a state-of-the-art senior residential community on its campus. “We are working on a feasibility study—how to best integrate it with the existing campus community,” says Nielsen. “We have studied our land and have an idea of what it can support, but it’s a complex project and we’re doing it in alignment with regional needs.”

In addition to investment from Saint Joseph’s, funding for the project is expected to come from a combination of corporations, foundations, and government and non-government grants. The Ogunquit-based Tramuto Foundation has already made a $100,000 grant, and Nielsen emphasizes that the entire undertaking is a “cross-sector partnership” that will necessitate alliances with other institutions serving older Mainers. “We intend for the residential community not only to have a positive economic impact but also a social one, for the people living in it, for the college, and for the whole region and state,” he says. “We will do what we have always done: respond to need with service and education.” 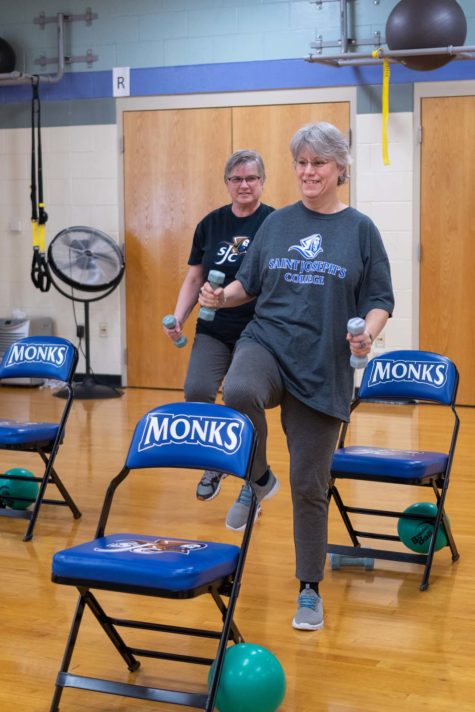