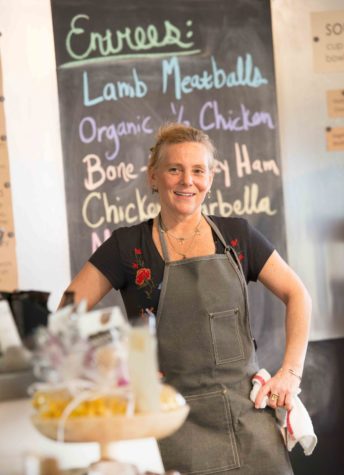 Susan Barnes in front of the specials board at Dot’s Cafe and Market in Lincolnville, which she purchased in October. 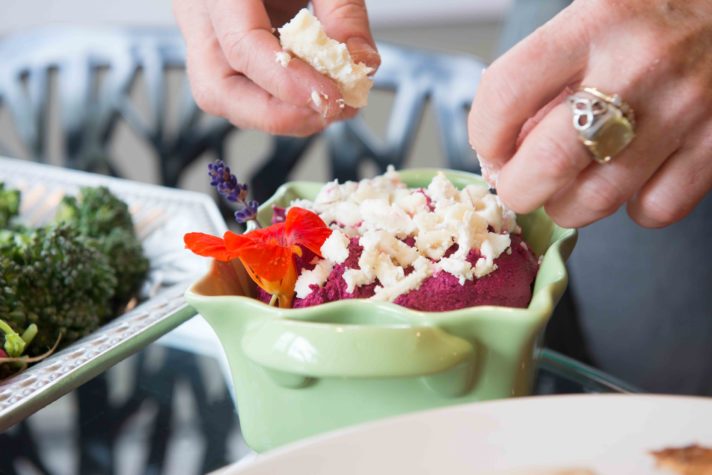 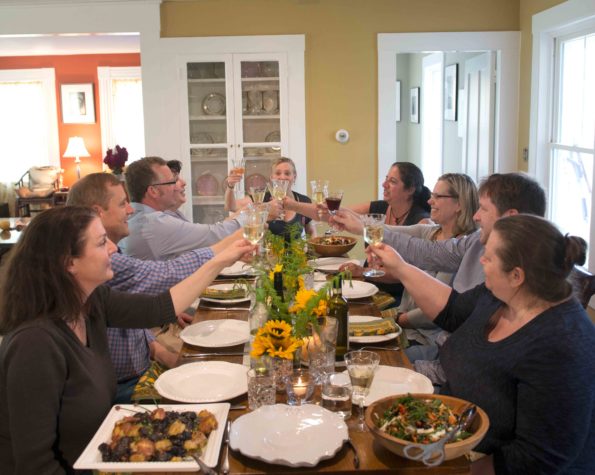 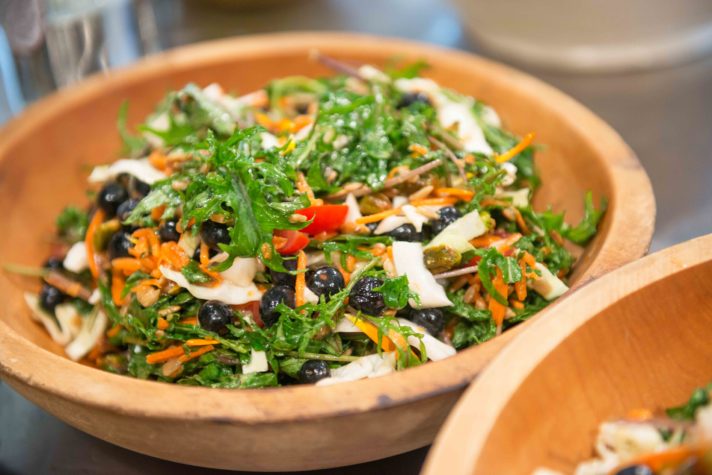 Cooking Her Way Back Home

At her Lincolnville café and entertaining friends, Susan Barnes brings joy and healing through food.

Susan Barnes’s first job in a kitchen wasn’t her choice. Nor was it technically in a kitchen, but in the galley of the Stephen Taber, the 110-foot windjammer her parents, Ken and Ellen Barnes, operated out of Rockland Harbor.

“It was a family business, and my siblings and I were expected to help out,” says Barnes. For her, this meant getting acquainted with the wood-fired cook stove Ellen Barnes used to turn out three gourmet meals a day for 23 guests on the Stephen Taber’s week-long cruises. “At the time I didn’t know how cool it was—to me it was like indentured servitude,” Barnes says with a wry smile. The summer after eighth grade, she rebelled by getting a job onshore—washing dishes in a Camden restaurant. But the culinary flame had been lit, and the warmth of its fire has always pulled her back into the kitchen.

In October, Barnes purchased Dot’s Café and Market in Lincolnville, leaving behind a 14-year career as a massage therapist and yoga instructor in Portland and Rockland. She, her 12-year-old daughter Isabella, and a golden retriever puppy named Macduff have settled into the small house that came with the property, just a few steps from the café’s back door. Barnes has quickly made it her own, opening up a wall to bring more light into the living/dining room space and connect it to the kitchen, which she renovated with sleek birch cabinets, a wall of open shelving, and stainless steel appliances. A large window at the back looks over a small apple orchard. “I’ve spent a lot of time in galleys, and even our kitchen when I was growing up was dark—like being on a boat—I wanted this to be bright and airy,” Barnes says.

The cheerful and cozy home is now ideal for entertaining, and on this May Sunday, Barnes is hosting its inaugural dinner party, in partnership with her good friend, Leslie Oster. The two met when Oster’s mother Sally Lincoln went to work for Barnes’s parents as a business manager and consider their close relationship “more like sisters,” says Oster. “We can say things to each other that friends wouldn’t.” The longtime general manager/catering director at Aurora Provisions in Portland, now a special events/development director for Full Plates, Full Potential, Oster has been instrumental in getting Dot’s up and running. “I said, ‘I can’t do this unless I know you’re there with me,’” says Barnes. “Leslie coined our slogan, ‘From hearth to home.’” The two women banter and laugh easily as Oster put the finishing touches on a platter of crudités, much of it from local gardens, and Barnes samples the basil-infused lemonade for the cocktail she will offer as guests arrive. “Too sweet,” she insists, squeezing in more lemon juice.

As she deftly portions a large chunk of halibut into pieces for the grill, Barnes shares some of her history. After graduating from the culinary program at Johnson and Wales University in Providence, Rhode Island, she worked on her parents’ second boat, the Pauline, a repurposed sardine carrier that offered an upscale experience with meals served on fine china. While still in her 20s, she traveled to Prague—her brother was living in the rejuvenated Czech city and she thought she might launch a restaurant there. Missing her family, she instead came back to open Waterworks restaurant in Rockland in 1995. “It was a gastropub, before anyone knew what that was,” she says. But the long hours and challenges of the business took its toll, and in 2003, she sold it. She and her young daughter moved to Portland “to be closer to Leslie,” and Barnes became involved in healing and wellness through massage and yoga. Barnes kept her hand in cooking by doing private chef work, and when Dot’s became available, she was ready for a new challenge. “I needed to go back to food,” she says. “I left it tired, and angry, and done; but I knew I had another chapter.” Isabella is also now old enough to be somewhat independent. “We’re a team,” says Barnes. “She never really got my cooking thing before and I wanted to show her what it’s all about, to be a role model for her.”

The first guest to arrive is Caroline Cole, the new owner of the Victorian by the Sea inn down the road. Soon Barnes’s boat captain brother, Noah, comes in with his wife Jane and their son, Oscar, who runs off to join his cousin Isabella on her trampoline. When Ken and Ellen Barnes retired, Noah and Jane took over the Schooner Stephen Taber, and now also operate Ladona—the original name of the restored schooner once known as the Nathaniel Bowditch. The remaining guests include Sarah Jenkins, chef-owner of Nina June in Rockport, old friend Tim Waite, and his partner George Peters. Glasses in hand, they nibble on the crudités with beet hummus and roasted onion dip, while Barnes tosses her “super food salad”—baby kale she picked this morning at a local farm, carrots, shredded cabbage, roasted pistachios, and blueberries. She plucks calendula petals to add to the bowl, then drizzles the salad and a sheet pan of smashed new potatoes with olive oil from the farm her sister, Lauren, owns in Tuscany. “Bella and I are going over there this fall,” Barnes says excitedly.

Finally seated around the table, decorated by Oster with vases of sunflowers and ferns, everyone raises their glasses to Barnes, who immediately gives credit, and a hug, to her longtime friend. “I forgot how happy it makes me to feed others,” says Barnes, as she passes a colorful platter of grilled halibut on pea and mint puree, garnished with pea shoots and edible flowers. “It’s about joy and healing,” she continues, holding up her hands. “That is the artistry of being a massage therapist, and in the same way, my hands are creating beauty and happiness with food.”

Combine all of the salad ingredients in a large bowl, mixing well with your hands.

In a blender or medium bowl with a whisk, blend the dressing ingredients until well combined.

Just before serving, toss the salad with the dressing. 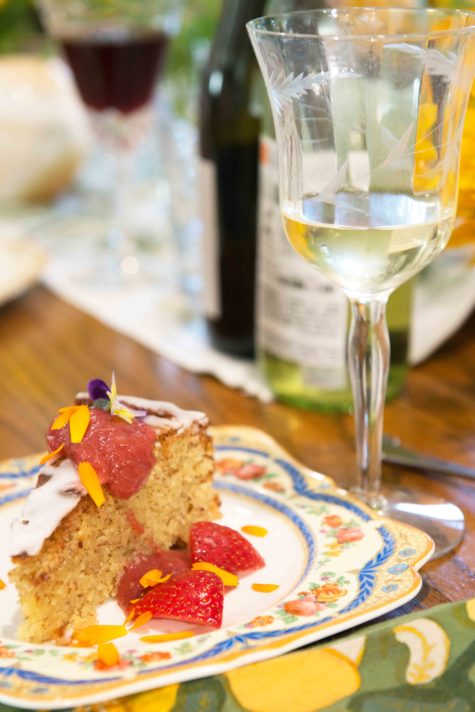 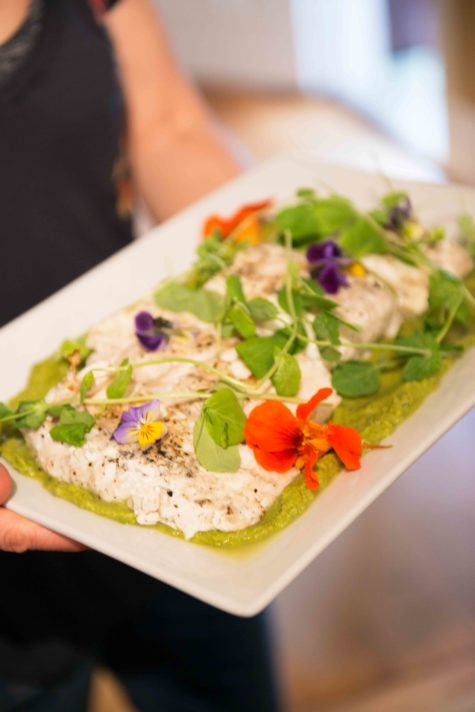 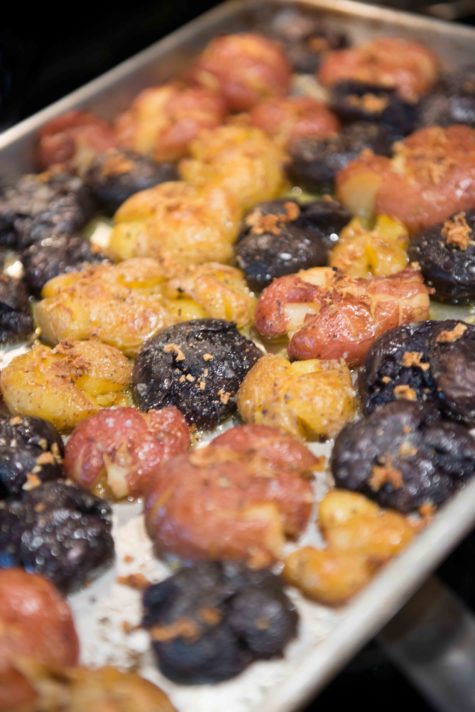 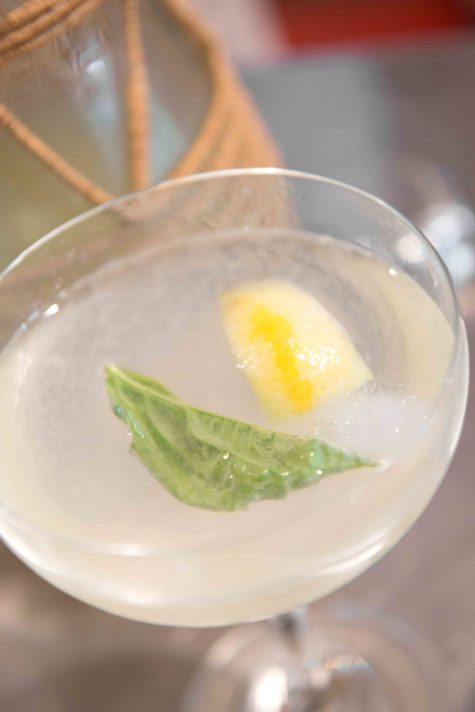 A cocktail with basil-infused lemonade.