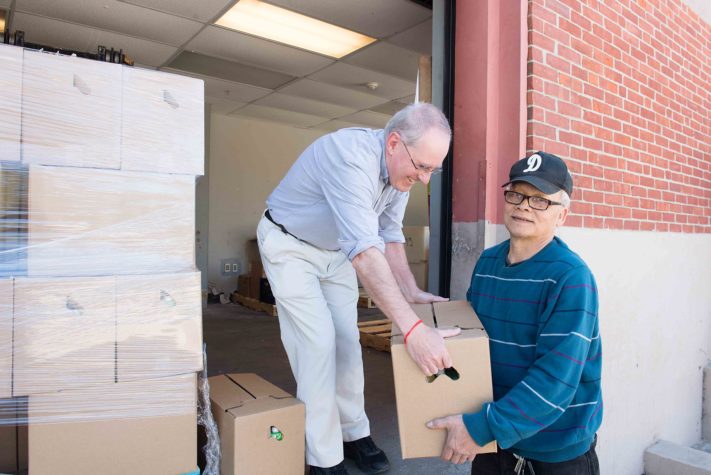 Leeming, left, works with a colleague at Wayside Food Programs. The organization operates multiple hunger relief efforts in southern Maine, including mobile food pantries and a food rescue program, which salvages useable food from markets and other establishments for use at soup kitchens, food pantries, and elsewhere. 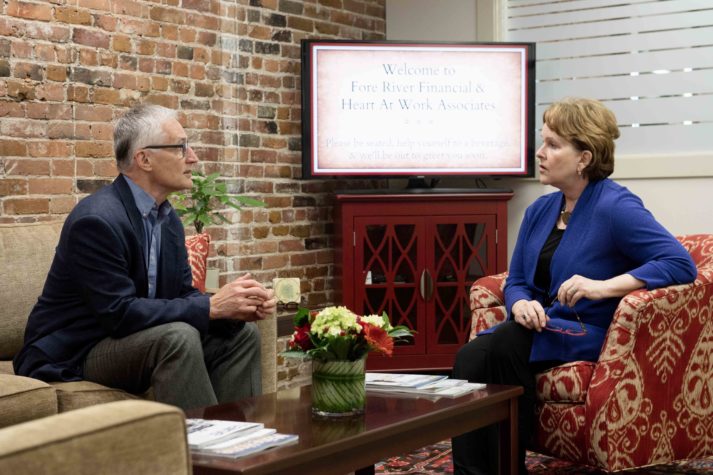 Barbara Babkirk and Doug Babkirk in the waiting room of the Portland career counseling and outplacement services offices of Heart at Work Associates, of which she is the founder. The two are planning a retreat for people who want to explore life after they retire from a primary career. 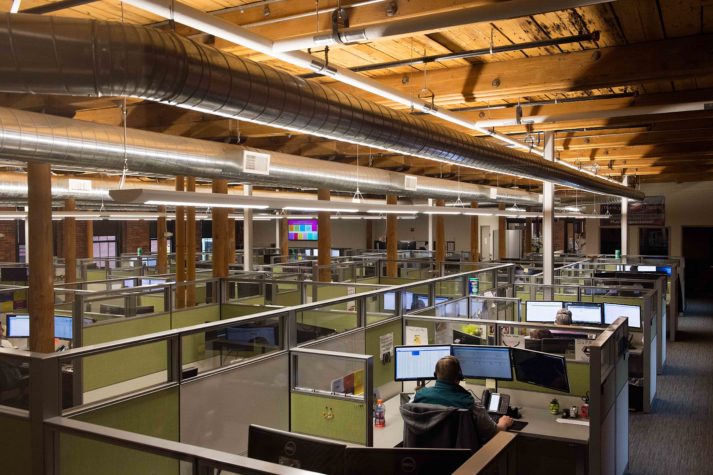 The offices of Community Health Options (CHO) in Lewiston, a nonprofit health plan for affordable health insurance, which won a Silver Collar Award for meeting the needs of mature employees.

Rethinking sustainable and meaningful work in a changing labor market.

If you caught last year’s movie Lady Bird, you likely took in some bad news about aging in the workplace. One of the titular character’s parents is highly skilled, unemployed, and not making any headway in his job search due to ageism. He loses one job to his own (quite handsome) son, whose sole work experience is as a supermarket checkout clerk. While that likely represents some version of a truth experienced by many in this country, Maine may be on its way to suggesting a new paradigm. At least that is the hope of career counselor Barbara Babkirk, founder of Portland’s Heart at Work Associates, and Joyce McPhetres, chief of human resources at Lewiston’s Community Health Options. They believe Maine’s current demographic—we are the oldest state in the nation—and a projected future labor shortage (given decreased birth rates and limited immigration to swell the numbers of younger workers) mean employers should consider new ways to employ and retain baby boomers.

The stereotypical concerns—older employees are a health risk, don’t have up-todate computer skills, and want too much money—are not accurate, says Babkirk. On the contrary, boomers (defined by the Census Bureau as people born between 1946 and 1964) are the best-educated generation in history. They are hard workers. Financial necessity, the rising retirement age, and simple desire may keep those in their upper 60s and 70s in the workplace longer.

What this population may need, however, is a more flexible way to work. Community Health Options (CHO) received a 2017 Silver Collar Award for meeting the needs of mature employees from the Maine State Workforce Board’s Older Workers Committee. Unlike Babkirk, McPhetres does feel health concerns are a concern for older workers, as are aging parents and other responsibilities. “At 50-plus, some life event might prompt folks to say, ‘I’ve got to leave, because I don’t have flexibility.

My company needs a full-time person,’” she says. “We have a work flexibility and transition program, the goal of which is to ensure we keep intellectual capital in the organization and support people in life situations who may need more time away from work.” With flexible work plans, including job sharing, reduced hours, and time off, neither CHO nor their older employees need lose out.

Meanwhile, Babkirk has a new initiative called the Boomer Institute, which functions as a matchmaking service, linking employers with older workers who might want short-term work projects. If millennials drive the gig economy on the West Coast, Babkirk says, why can’t Maine’s baby boomers drive it here?

Typically, the baby boomer clients with whom Babkirk works—others in her office focus on younger job seekers—find retirement boring, or want more personally satisfying work, or have lost a job (typically due to the vagaries of the marketplace, rather than performance reasons) and are wondering what to do. Whatever their circumstances, increasingly Babkirk’s clients want their work to give them a sense of purpose.

Take John Leeming. He had a successful career in business project management with Unum from 1989 to 2017. He enjoyed his work, found it creative and challenging, and valued the company. Even so, he came to think, as he says, “There are other things I would like to be able to do with my career and skills. I want to do something for the general good, to be able to say I made a difference.”

Because he did not need to generate income, Leeming was able to turn what had previously been volunteer interests into more serious commitments. He expanded his role as president of the board of Wayside Food Programs, focusing his attention on the Commodity Surplus Food Program, a federally funded initiative that provides a box of healthy food to low-income seniors each month. Previously a volunteer for his local American Red Cross chapter, he is now its Disaster Action Team Coordinator, providing short-term assistance for people affected by a local event, such as a house fire. Finally, he went back to an early aspiration: teaching. He tutors and mentors part-time at Portland Adult Education.

Leeming’s long tenure at Unum bears out what Babkirk has observed: boomers do not change jobs as often as millennials. Forty-one percent, mostly older boomers, remained in their jobs for two decades, according to a 2016 Associated Press report. Eighteen percent remained for 30 years. As such, they “are not particularly aware of what it takes to change careers or jobs in this marketplace. Specifically, they are not aware of the significant role that LinkedIn plays, beyond posting a very short profile online,” says Babkirk. This cohort tends to think emailing friends to say, “I am looking for work, keep me in mind” is enough. To improve their chances, she guides clients to strategic conversations, so they end up with a concrete plan for their next chapter.

Beyond teaching practical job-search skills, Babkirk helps her clients decipher their own desires and marketable attributes. Clearly, for Leeming, “doing good” meant providing direct aid to people in need. Another client who worked in global marketing transitioned to special education after he had an autistic child. But for a different person, making a contribution might simply be about being a caring manager, says Babkirk.

“As people age and think about transition, it is not uncommon for there to be a theme, a thread that got dropped along the way in their life, that they end up reclaiming,” she says. This was certainly the case for Lisa Fuller, who first met with Babkirk when she was in her mid-40s and wanted to leave corporate America for a job that gave her a sense of purpose. Babkirk urged her to take a year-long sabbatical, even when Fuller thought she wanted to apply for an executive director position. Babkirk was convinced her client needed more time to connect with her heart, rather than her head, to figure out what she truly wanted. So Fuller took long walks, started playing the piano again, and joined the board of Hospice Maine in the wake of a friend’s death. Sure enough, a thread did emerge. One day as she played the piano in a facility for seniors, she recalled that she used to volunteer for a nursing home when she was in college. At the end of the sabbatical year, she partnered with a friend to run a nonmedical home care company for elderly clients who wanted to stay in their homes. She ran this company for seven years, then made another job change. She started LifeStages, which offered eldercare assistance, advocating for people in hospitals, helping families make difficult decisions, and providing seniors what they needed to stay independent. She sold LifeStages to VNA Home Health and Hospice in South Portland, first staying on as a director but eventually transitioning out of that job as well. Now she is imagining a way to go back to eldercare advising but with more flexible work hours.

Fuller feels that later life has become so complex that people should have a financial planner, attorney, and eldercare advisor helping them: a triumvirate, as she puts it. There is, however, a fourth thing many people will need to afford all of that—a job. The good news is that jobs may be there—and not only the jobs that people tend to find less desirable. Barbara Babkirk believes there will be an increasing need for leaders in the nonprofit sector, as founders retire. Maine Department of Labor’s Center for Workforce Research and Information anticipates the biggest area of job growth between 2014 and 2024 to be in healthcare practitioners, technical occupations, and support occupations. To fill these jobs, employers and older employees alike may need to rethink their assumptions about age if there is to be a mutually beneficial solution to Maine’s upcoming labor situation. 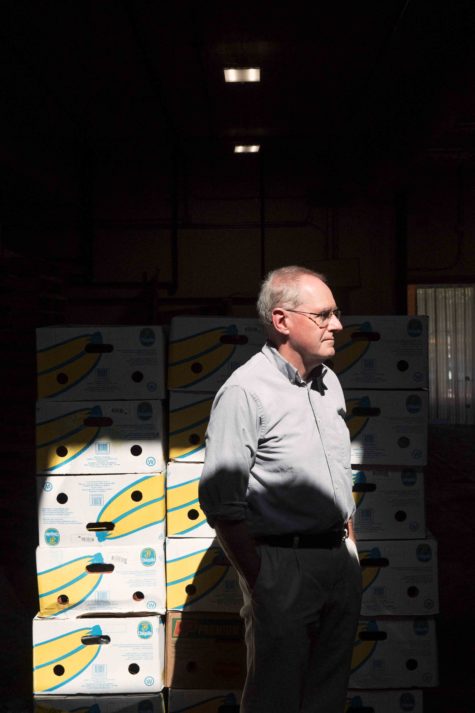 John Leeming transitioned out of an almost 30-year career in business to volunteer opportunities that allow him to give back to the community, including Wayside Food Programs in Portland. 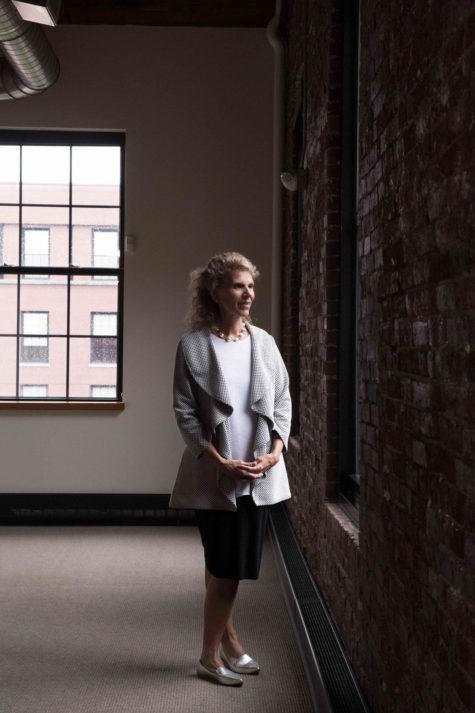 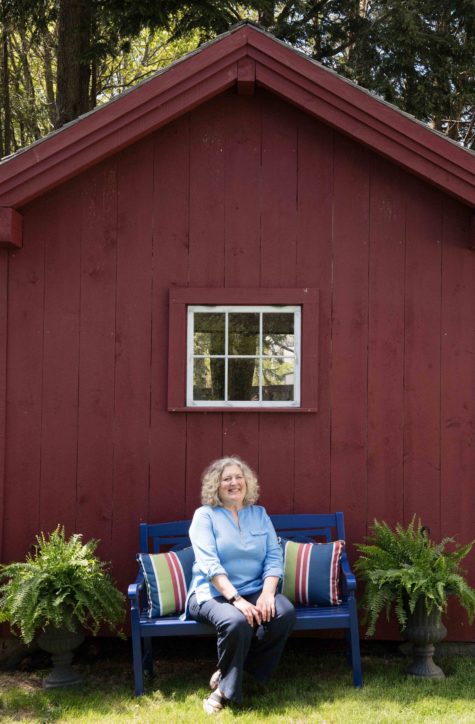 : Lisa Fuller relaxes at her home near Back Cove in Portland. With the help of career counselor Barbara Babkirk, Fuller has made several job transitions over the course of her career.