Panel discussion on grappling with a workforce that spans four generations: Baby Boomers, Gen X, Gen Y (Millennials), and Gen Z. What are the best practices for understanding differing mindsets, work styles, and communication styles of workers born in different eras so your team functions well as a unit? We will hear from leaders doing this work every day, and offer workshop-style training during breakout sessions that you can apply in your organization.

This year’s virtual WinterKids License to Chill event will include an online silent auction from November 6-19, followed by a live stream virtual auction on November 19 (6:30-9:30), hosted by our friend, Blake Hayes of Coast 93.1! Event details are still coming together, so be sure to check in at WinterKids.org/licensetochill for further details!

Join Portland Ovations the week of January 11-15, 2021, every day at noon as it hosts an exciting week-long series to kick off its new program of commissioning Maine artists. New Year, New Works is a series of five virtual, 30-minute, meet the artist style events. Each day you will meet a different Maine artist and learn about their project. Register one time for FREE and attend as many artist previews as you like.

The livestream link will be sent in the RSVP email confirmation. Attend as many artist previews as you like with the same link. Please make sure to check your promotions, junk, and spam folders so you don’t miss the email!

Portland Ovations is excited to announce the return of Performances in Your Parks. Working closely with the City of Portland to ensure everyone’s health and safety, on Saturday, February 6 between 11:30am and 6:00pm Ovations will present four 15-minute outdoor pop up performances by Ice Dance International. Performances include outdoor pop-up shows at The Rink at Thompson’s Point and at venues around the City of Portland. All attendees are asked to dress warmly, to wear masks and practice social distancing. The event is weather dependent with a rain date of February 7. 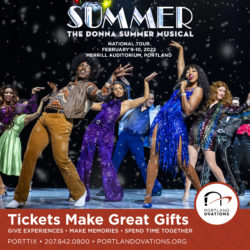 With a score featuring more than 20 of Donna Summer’s classic hits, including “Love to Love You Baby,” “Bad Girls,” and “Hot Stuff,” this electric experience is a moving tribute to the voice of a generation. Tickets for “Summer,” showing at the Merrill Auditorium February 9 and 10, are available now and make great gifts!

Step Afrika! is the world’s first professional company dedicated to the tradition of stepping — a polyrhythmic, percussive dance form that uses the body as an instrument. Based on Step Afrika!’s award-winning arts education programs and more than 25 years of performing and teaching students, the Company has created FIVE DAYS WITH STEP AFRIKA! to support the academic environment as well as the challenges of virtual learning. There are five energetic episodes that can be watch in numerical order, or any order you’d like. 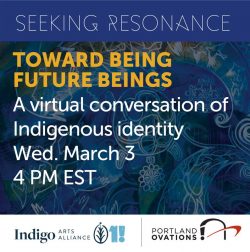 This event is captioned.

You’re invited to a free conversation on contemporary art making on Wednesday, March 3 at 4 pm via Zoom. Please join Portland Ovations, Indigo Arts Alliance, and a dynamic group of North American Indigenous artists in a sweeping conversation, “Seeking Resonance: Toward Being Future Beings.” This gathering looks toward the development of renowned Yup’ik artist and choreographer Emily Johnson’s new multidisciplinary project, “Being Future Being,” of which Portland Ovations is a co-commissioner.

This virtual conversation brings Maine-based artists Jason Brown (Penobscot), Donna Decontie (Penobscot) and Chris Newell (Passamaquoddy) into dialogue with Emily, her collaborators Drew Michael (Yup’ik and Inupiaq) and Maggie Thompson (Fond du Lac Ojibwe), and you. Together, we will share a conversation that spans fashion, dance, performance, music, and textile and visual arts, as they discuss their experiences as Indigenous artists making work today: their relationships to tradition, place, spirituality, and more.

Free RSVP to receive the Zoom link to this conversation. 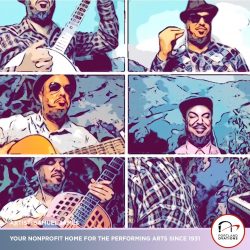 Join Portland Ovations on March 13th as Samuel James tells the Story of Tiny Bill McGraw! Tiny Bill, a little Black boy, doesn’t like being small. His grandfather takes Tiny Bill under his wing and teaches him – and the audience – about his musical heritage and that size isn’t everything, especially if you can make a big sound! Through the story of Tiny Bill, Samuel James interweaves music, performance, Black American history, and a few life lessons while putting on a performance of his own. From finger snaps to banjo to piano, James shares his depth of musical talent in this 30-minute poignant storytelling experience of the fictional Tiny Bill McGraw in 1930s America.

The innovative and playful video format allows the audience to see him play numerous instruments at once as he builds to a final performance as a one-man nine instrument folk orchestra. This arts experience is a layered lesson in music and history informed by James’ unique perspective as a Black American folk musician with deep ties to Maine. Samuel James is an award-winning singer/songwriter, world-touring musician and Moth Mainstage storyteller, filmmaker, journalist and educator. For more than a decade he has performed extensively throughout the United States as well as more than 20 other countries, back when you could do that kind of thing.

Suggested for ages 5 and up. 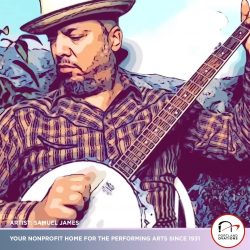 This event will be captioned and ASL interpreted.

Join Portland Ovations and come hang with musician, singer, and storyteller Samuel James as he shares a behind the scenes glimpse at his “Story of Tiny Bill McGraw”. You can expect many guitars, some harmonica jams, and double finger snaps. It goes without saying that he’ll also play a few improvised tunes. This event is only offered live and will not be recorded. Recommended for all ages

HOW TO PARTICIPATE
RSVP required, upon registration you will receive a Zoom link in your confirmation email to join the event.

Healing to Live and to Lead: Join the Maine Development Foundation for a workshop with Lisa Sockabasin of Wabanaki Public Health and Wellness. This event is open to all, via Zoom.