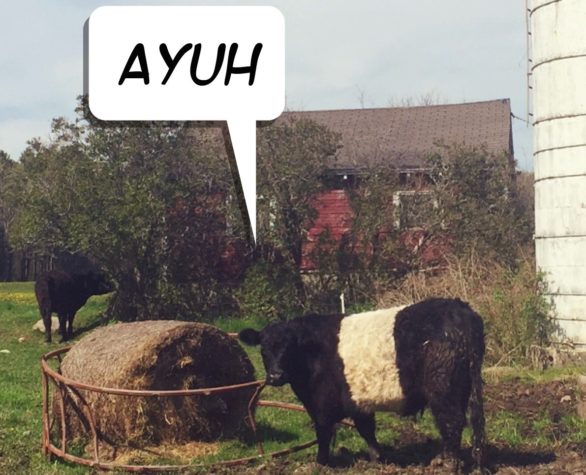 Your Guide to Maine Lingo

There’s no particular technique for sounding like a Mainer. If you are “from away,” it may be difficult to navigate the contrarian twists of the Maine dialect, not to mention the rich vocabulary that is unique to Maine. To make it even more difficult, Maine has a surprising amount of regional diversity in dialect. Islanders speak a little different from downeasters, and city folk speak a little different than those from the County. But put a group of born-and-raised Mainers together, and you’ll inevitably start to pick up on some of the telltale signs of their heritage. The intrusive “r” that gives us “a wicked good idear,” the occasional “yessahs” of agreement, and the age-old stories of days spent “upta camp.”

For visitors to the state, the foreign vernacular can be heard as an indication of authenticity, like an audible stamp in your passport of Maine. For Mainers, there’s something deeply nostalgic about how we speak. It separates us from the rest of the world. So whether you are from away or you long for the sounds of home, this guide to Maine lingo should help you out, bub.

Cunning: Cute or adorable. Most frequently heard from old timers with an added pinch on the cheek.
Example: “Well, aren’t you just the most cunning thing I’ve ever seen.”

Upta camp: No matter where it is geographically, going “upta camp” means you are going to a more rustic place—usually a camp or cabin on a lake, river, or the coast. Going upta camp is a beloved Maine tradition.
Example: “A day upta camp is worth a month in town.”

Yessah: An exclamation of agreement.
Example: “Cold enough for ya? Yessah!”

From away: A non-native person or a person who doesn’t have roots going back three-plus generations. This person is lucky enough to visit Maine, but not to stay.
Example: “He doesn’t know; he’s from away”

Flatlander: See “from away.”

Dooryard: The yard just outside your entrance door. Most commonly used by mothers to remind their children where to leave their shoes.
Example: “Don’t track that snow into the house! Leave your boots in the dooryard.”

The County: Aroostook County, the northernmost county in Maine. There are 16 counties in Maine, but only Aroostook County is known as the County.
Example: “Headin’ up to the County for the Northern Maine Fair!”

Downeast: Originally “downeast” was a sailing term referring to the direction sailing ships traveled to get here from Boston, meaning downwind and to the east. Today the term describes the stretch of coastline along Washington and Hancock counties, including Bar Harbor, Machias, Jonesport, and Eastport.
Example: “Head downeast to experience the beauty of Maine’s coast”

Down cellah: In the cellar or basement. If you are “down cellah” you may be getting wood from your stockpile or butchering a deer.
Example: “Hello! Anyone home?” “We’re down cellah!”

Puckahbrush: Any type of scrubby vegetation that might scratch your legs up when you unknowingly trek through it.
Example: “Be careful up ahead. There’s puckahbrush all over the trail”

Apiece: A vague way to measure distance.
Example: “Head down the road apiece; you can’t miss it”

Bean’s: L.L.Bean’s famous flagship store in Freeport, known for its rubber and leather boots made popular by hardworking Mainers.
Example: “Gotta head out to Bean’s to get my boots and slippahs.”