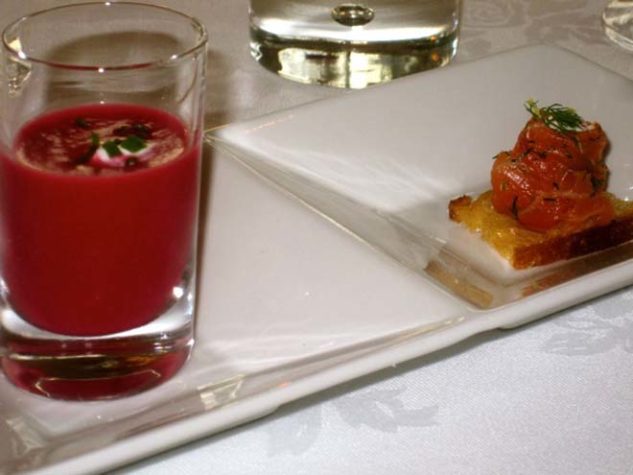 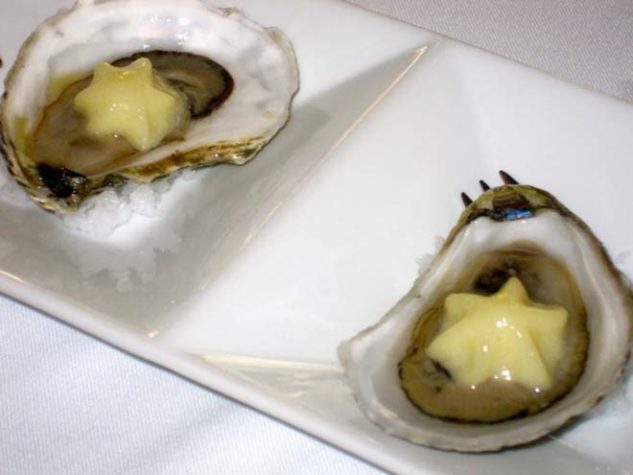 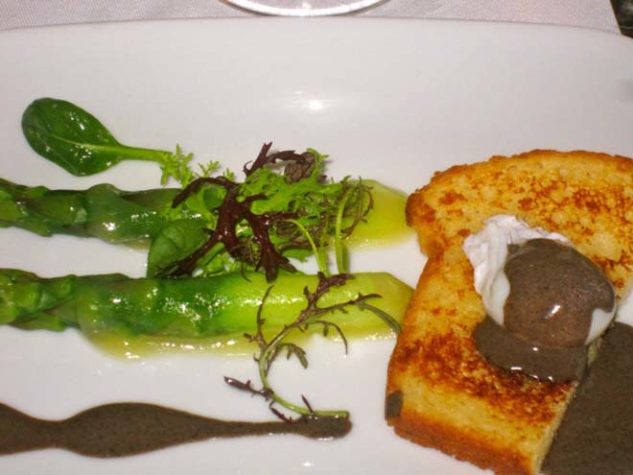 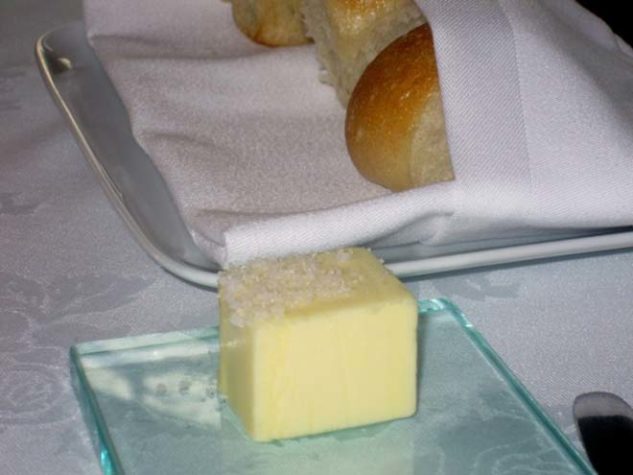 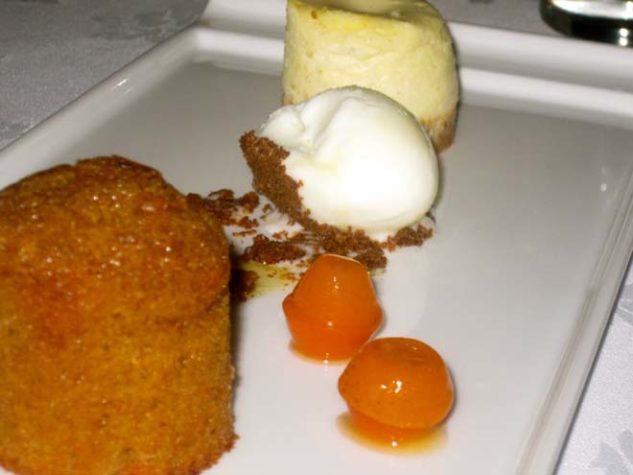 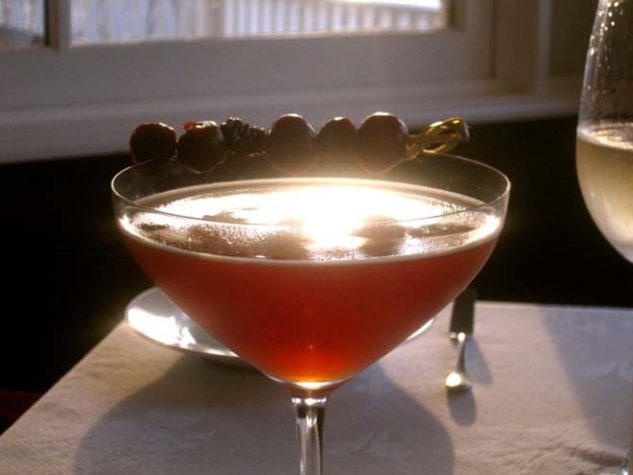 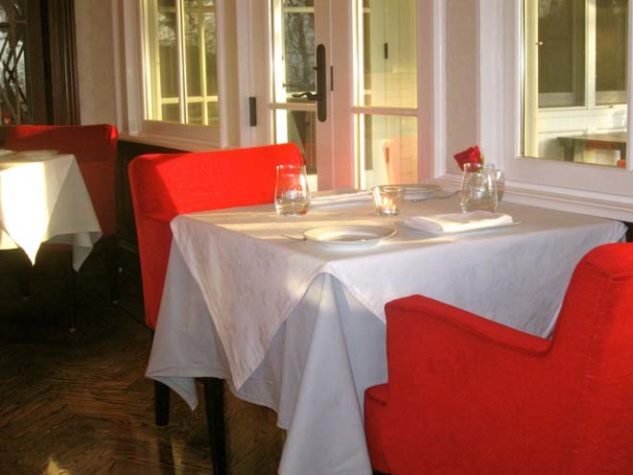 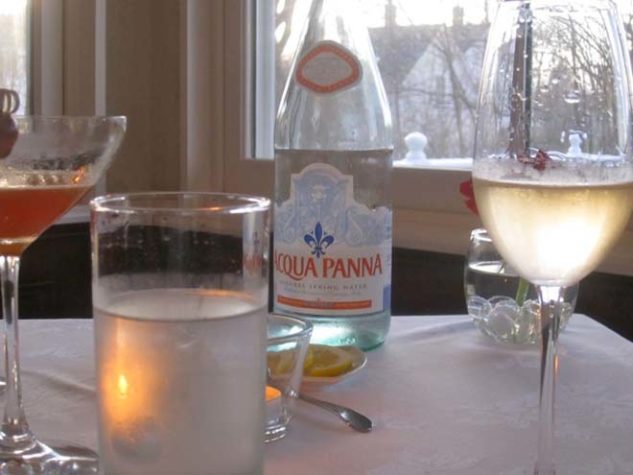 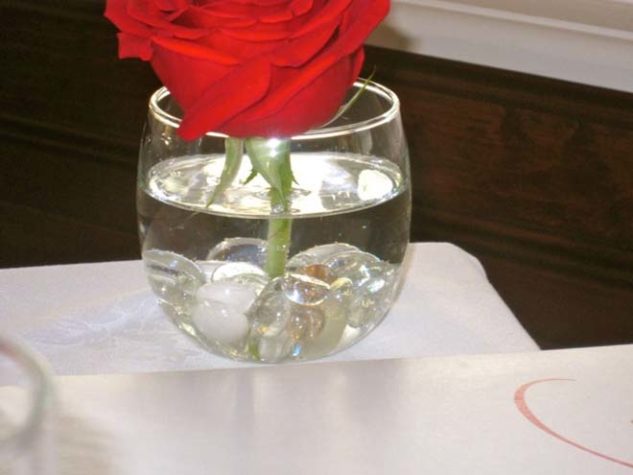 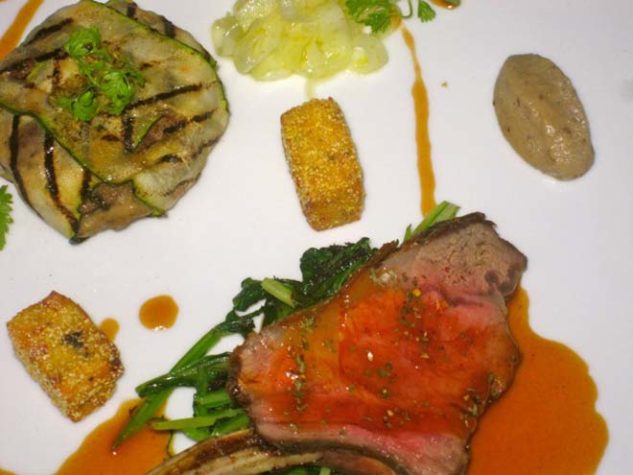 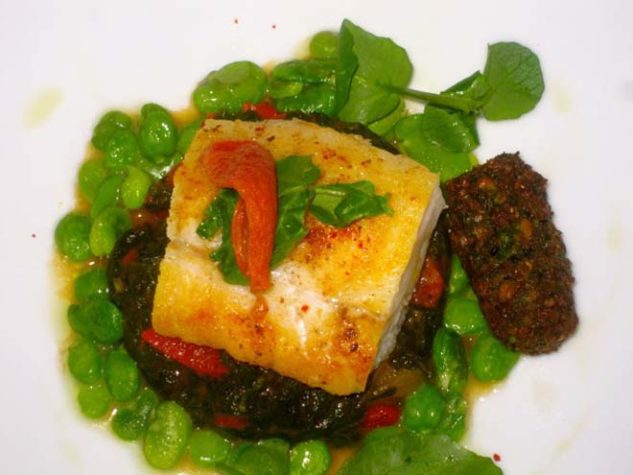 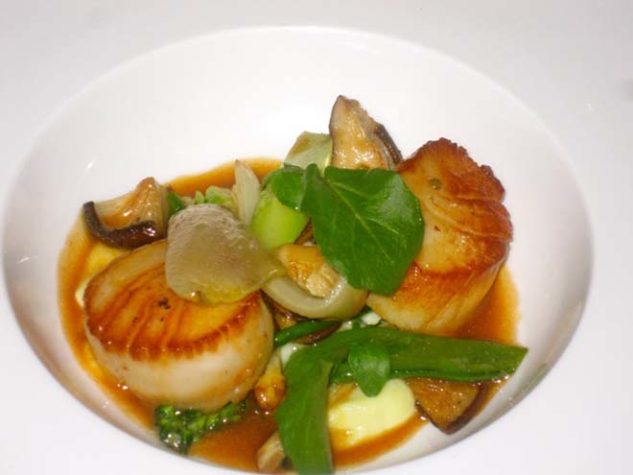 From pre-dinner cocktails to the most incredible beignets you will ever taste, every last detail of the dining experience is executed with painstaking precision.

After hearing rumblings about Natalie’s newly acquired executive chef, Belgium native Geoffroy Deconinck, I decide that there is no better time to check out what many consider to be one of the most impressive dining experiences in the midcoast. With culinary legends like Alain Ducasse, Daniel Boulud, and David Bouley appearing on his extensive resume, there is no denying that Chef Deconinck is a force to be reckoned with.

Dutch interior designer Mascha Brunia is responsible for the restaurant’s decor, which is a decidedly more modern interpretation of a Parisian brasserie, dominated by bold, brightly colored red furniture and accents. The dining room is flooded with natural light, which makes it especially pleasant while the sun sets over the scenic coastal town of Camden.

After being seated, my dining companion and I choose Panna as our still water for the evening, while I peruse the wine list. I am immediately put at ease, as this is hands-down one of the better collections I have encountered in Maine. It strikes a perfect balance between “prestige” wines and lesser-known producers of equal quality, with each selection thoughtfully placed to serve a specific purpose. Though organized by region, there are also categories highlighting various wines from specific winemakers such as Hermann Dönnhoff, known for bracing and exciting Rieslings from the Nahe region in Germany. In addition, diners are given the opportunity to taste a “vertical,” a unique offering of three consecutive vintages from Lebanese winery Chateau Musar. Another option is the “horizontal,” consisting of four wines made with the same grape by the same producer but from different vineyard sites, by Oregon Pinot Noir producer St. Innocent.

We opt for the chef’s tasting menu, and, based on the quality of the list, put the fate of our wine pairings entirely in the restaurant’s hands as well. Bar Manager Tom Laslavic, who also performs the duty of sommelier this evening, suggests we begin with one of his cocktails, the “Conundrum Number One.” Though, as I often confess, I am not generally a cocktail drinker, preferring my liquor in a glass by its lonesome, this libation is different. I can immediately detect many layers of flavor, achieved by mixing 10 Cane rum, Grand Marnier, Laslavic’s own bing cherry bitters, and Cardamaro, an Amaro-based liqueur infused with cardoon and sea nettles. It is quite refreshing, seamlessly walking the fine line between sweet and tart.

The first of two amuse-bouche to arrive is an earthy, silky borscht, joined by a single crostini topped with delicate salmon gravlax, twirled with dill and sour cream. This is followed by two Pemaquid oysters, crowned with a perfectly star-shaped garnish of yuzu and cucumber foam. This is probably one of the most effective uses of foam that I have ever encountered. The texture elevates that of the plump oyster, and the slightly fruity and tart flavors of yuzu and refreshing cucumber work in perfect harmony with the briny oyster liquor.

Jean Vesselle Brut Reserve NV, from a small grower-producer in Bouzy, Champagne, couples quite agreeably with each dish. It has a pronounced aroma of apple with a hint of brioche, transitioning into flavors of peach, toast, and a slight brown-sugar characteristic. As it turns out, the bubbly is also a reasonable companion to the warm dinner rolls from Atlantic Baking Company in Rockland, which are served with a cube of sea-salted butter. These are quite delectable, and I can’t help but refer to them as the grown-up version of the “Rudi Roll.”

Our first official course is green asparagus gratinées, with the brilliant green stalks of asparagus enveloped in comté cheese, a less aggressive cousin of gruyére that serves to complement rather than overpower the flavors of the vegetable. A warm slab of freshly baked brioche holds a runny quail egg and a luxurious preserved black truffle sauce. It is common knowledge that asparagus is one of the biggest challenges when it comes to pairing wine, but the Philippe Portier Quincy, a vivid aromatic Sauvignon Blanc from the Loire Valley, actually succeeds at the task with flying colors. Its minerality and gripping acidity also serve to provide refreshing contrast to the egg yolk and creamy truffle sauce.

The next course features ultra-fresh scallops, cooked perfectly a la meuniére, resting in a dollop of velvety white asparagus puree with toothy shitake mushrooms and a meat jus. The delicate floral nature of the Copain “Tous Ensemble” Viognier from Mendocino County becomes a bit muted next to this dish, but instead reveals entirely different, almost caramelized notes.

Service flows at a seemingly effortless, comfortable pace, and Emily, our server, provides just the right amount of attention. Of course, the more wine I enjoy, the chattier I get, and Emily adapts accordingly. Raymond Brunyanszki, co-owner of both the inn and the restaurant, periodically appears at our table as well, giving the experience a very personal feel.

We are presented with two wines for the next course, both Chardonnay, but each quite different. The first is from Groth in Napa Valley, which displays, in addition to the pre-requisite but not overpowering oak found in most Chardonnays from this region, a fair amount of tropical fruit. I must admit that I prefer the second selection, from St. Innocent “Freedom Hill Vineyard” of the Willamette Valley, if only for its heightened levels of acidity which, in my opinion, are the hallmark of a great wine to pair with food.

Both of us fare well with our pan-seared monkfish, which is seasoned to accurately showcase the clean and buttery flavor of the meaty fish. It is nestled into a mound of warmly spiced sweet peppers and spinach, encircled by fresh fava and garbanzo beans. Chickpea falafel, served almost as a garnish, adds a welcome, crunchy texture to the dish, elevating what was, in my opinion, already perfect.

A palate cleanser of blueberry sorbet seems normal enough at first, though I question its appearance knowing there is still wine to come. To my surprise, it proves to be far more savory than sweet, due to the addition of vinegar, causing it to be, hence the expression, an actual palate cleanser.

The dining experience truly reaches its zenith with the lamb entree. There are several components, starting with the rack, cooked impeccably medium rare, as per my request at the beginning of the meal. I will never forget my bite of wonderful, buttery, sweet fat, smothered in lamb jus, which actually causes even a quick eater like myself to take a short pause and savor. Tender, slightly bitter braising greens complement the flavor of the meat, as do the two small cubes of cornmeal battered polenta and a dollop of smoky eggplant caviar. On the other side of the plate rests the zucchini tatin, with paper-thin slices of zucchini housing ground lamb that has been beautifully spiced with cumin, coriander, and a touch of star anise. Yet again, Laslavic is spot-on with the wine pairing, Shea Wine Cellars Estate Pinot Noir, from the Willamette Valley. It is fairly full bodied for Oregon Pinot, with intense flavors of black cherry, blueberry, and the faintest smoky notes of lapsang suchong tea. It is best enjoyed while ignoring social cues and gnawing on the lamb rackyou do not want to miss out on a single bit of succulent, juicy meat.

Carrot cake happens to be one of my favorite desserts, so naturally I am delighted to see it show up in our final course. A tangy yogurt sorbet and a delicate, yet very rich, mini New York-style cheesecake join the light, spongy carrot cake, with kumquat marmalade on the side. The intense flavors of apricot and caramel found in the Arygros Estate Vin Santo from Santorini make it the ideal dessert wine for this lineup.

After such mind-numbingly great food and flawless wine pairings, the only reasonable option left for me is to slowly sip smoky Herradura Anejo tequila on the rocks at the bar while my dining companion enjoys her coffee. If we weren’t staying about ten minutes up the road, I would most certainly have inquired about one of the striking, modern suites at the Camden Harbour Inn. Then again, that sounds like another reason to return…