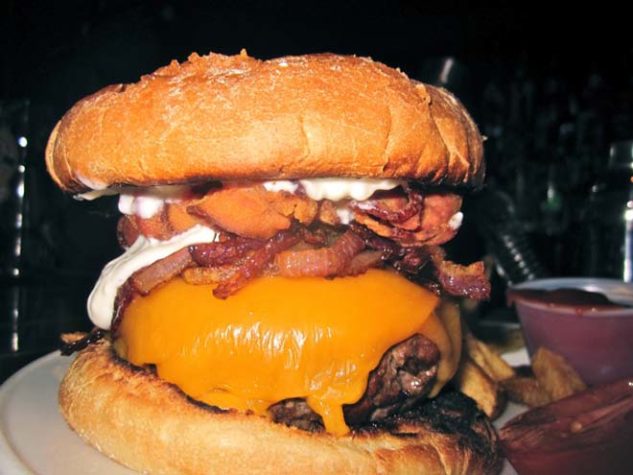 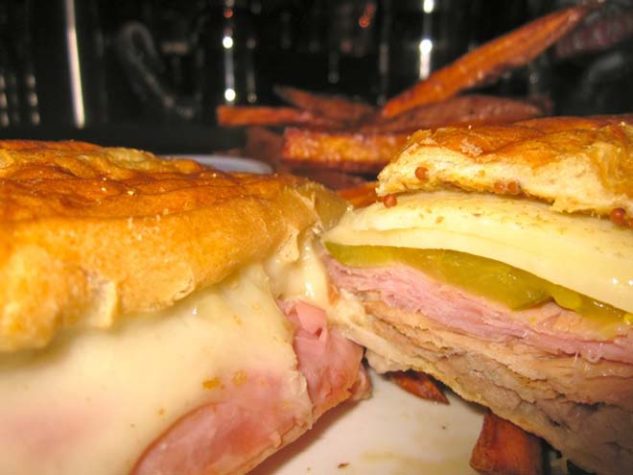 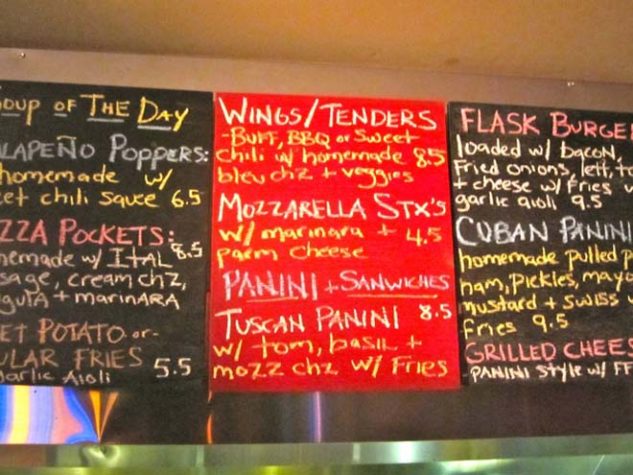 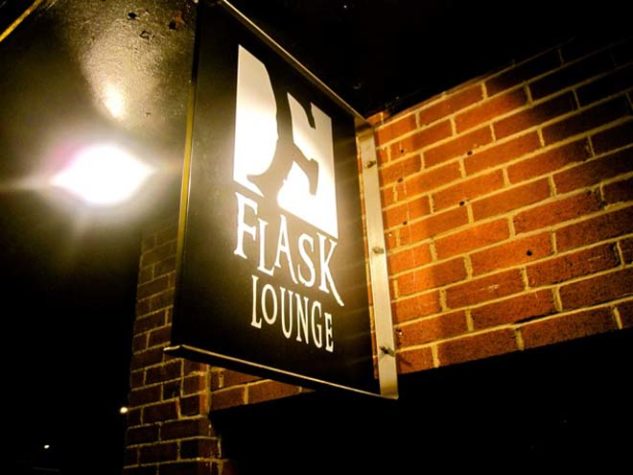 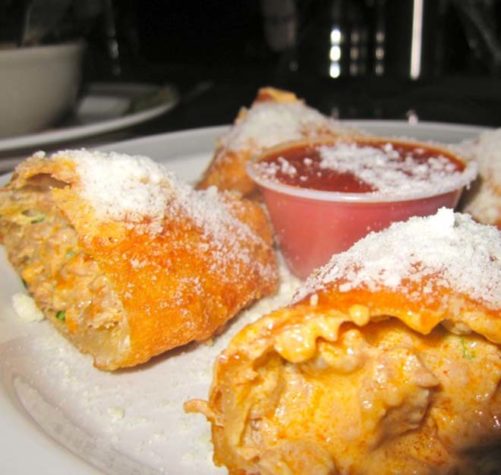 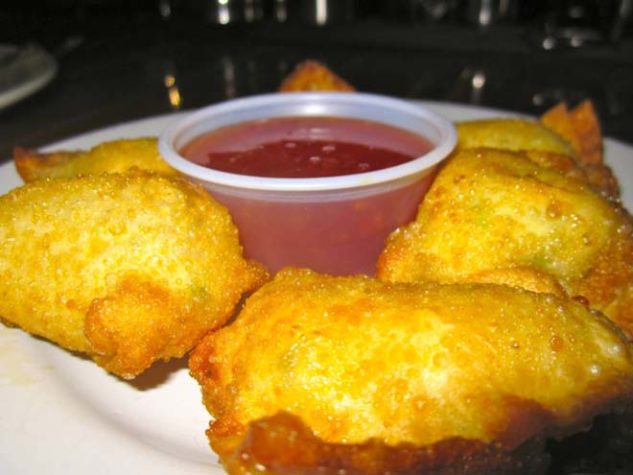 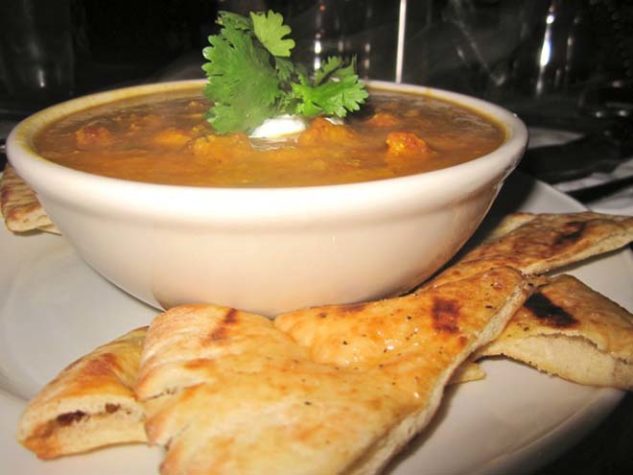 A few weeks ago at Flask, beleaguered and famished from performing karaoke at an ear-bleeding volume to Pat Benatar’s “Love is a Battlefield,” I find myself in dire need of solid nourishment before I can choke down another shot of Jameson. I’d known that Flask has a food menu, but never paid it much heed, assuming that the primary purpose for being in this quaint neighborhood bar is, at least for me, to get riotously drunk before going home and ordering pizza at 2 a.m.

I decide to try an order of Italian sausage pizza pockets, expecting something from Totino’s or Hormel tossed into the fryolator and served with Hidden Valley Ranch dressing (and honestly, at that point, I would have been totally fine with that). What arrives in front of me is, on the other hand, something entirely different. They are more like mini-calzones, fried to perfection and oozing spicy sausage and creamy cheese with flecks of arugula for color. They are dusted liberally with Parmesan cheese and served with a marinara dipping sauce. After devouring them hungrily, I am officially intrigued. I chat up bar-owner Jess Nolette about what she has gone and done here, and learn that she uses dough from Portland Pie Co. as a base and constructs each delicious little nugget by hand.

This gets the gears in my head turning, and after recovering from my hangover the next day I find myself pondering how delicious the pizza pockets were, prompting curiosity about the rest of the menu. I set up a time with Nolette on a slow night for one companion and myself to eat our way through what Flask has to offer. When we arrive, there are place settings, and Nolette announces that she will “course things out,” which is probably not a phrase she has to employ often at the bar. To make things even more unusual, I have decided not to drink alcohol in an effort to accurately assess the food. I urge my companion to take advantage of what is, quite likely, the only time I will ever offer to be designated driver after visiting Flask.

The “starter course” is a vegetarian chickpea soup simmered with warm Indian spices and fire roasted tomatoes. Nolette makes all of her stocks from scratch, and as I dig in I find that the grilled garlic butter pita on the side is a better method of delivery than a spoon, but force myself to use a bit of self-control, seeing a lot of food in my future.

Up next is a plate of jalapeno wonton poppers, golden brown and still sizzling from the fryer. I have learned from many wounds on my face that digging in during this stage is quite unwise, but I do it anyway. After the initial pain dies down, I observe that I am tasting the perfect marriage between a traditional popper and a crab rangoon, made with fresh jalapenos and cream cheese folded up into a crunchy wonton wrapper. The sweet chili sauce comes from a bottle because (and I wish more places would realize this), if it ain’t broke don’t fix it.

According to Nolette, if she is present at the bar, which is almost always the case, she is happy to cook food no matter the time of night. This philosophy saved me the last time I ordered the pizza pockets, but now comes the true test, as I taste them in the cold, hard light of sobriety. Yes, they are still awesome.

There is something very comforting about eating no-frills food like this in a sparsely decorated barroom dominated by an enormous projection screen. I especially enjoy this bar during the wintertime, mostly because Nolette has a small but hand-selected list of wines, all of which I would drink, another rarity for a setting like this. The wines provide an interesting contrast to the full selection of Pinnacle Vodka flavors, including the one that tastes like Swedish Fish, which somehow marries memories of both Little League and my first experience with liquor into one, wildly disturbing mental image.

Plump, meaty Buffalo wings arrive, doused with Frank’s Red Hot, as they should be, with a cooling yogurt-based bleu cheese and scallion dipping sauce. I will simply tell you that they hit the mark, which is what’s important when it comes to wings.

Now it is time for the beast simply known as “The Flask Burger.” An enormous, juicy beef patty, cooked medium rare and topped with melted cheddar, sweet caramelized red onion, crispy bacon strips, and garlic aioli on a toasted bun. Everything about this burger makes me happy, including the hand-cut French fries served on the side (with more garlic aioli to dip them in, of course). I have officially been pushed over the edge—my stomach is nearing the threshold of Hell—but I am not done yet.

Because it is a slow Monday night, the volume on the TV has been turned up in favor of music. At first glance, “The Sing-Off,” hosted by none other than former 98 Degrees member Nick Lachey, makes me angry. The more I watch, the more I find myself drawn into the acapella performances, and soon I am actually out of my seat standing closer to the screen. Upon realization of what I’m doing, I snap out of my trance just as one of the bar patrons assures me that “It’s okay, it has happened to all of us. This show has sucked all of us right in.”

The last hurdle to overcome is the Cuban sandwich, consisting of braised pork straight from the crockpot that I have been eyeballing all night, and the usual suspects: ham, pickles, cheese, and mustard on a grilled sub roll. The intensely flavorful and tender pork is the star here, leaving me, even in my current state of extreme discomfort, wanting a few more bites. Thankfully, the absence of beer has allowed me to get this far.

Consuming five courses of food at Flask is a great example of the things that I put my body through so you, the reader, do not have to. I suggest you pick and choose what sounds appealing to you, and, on a snowy, inebriated winter evening, enjoy them for yourself. I will say that if you are going to attempt the burger, get your turn at karaoke out of the way first…