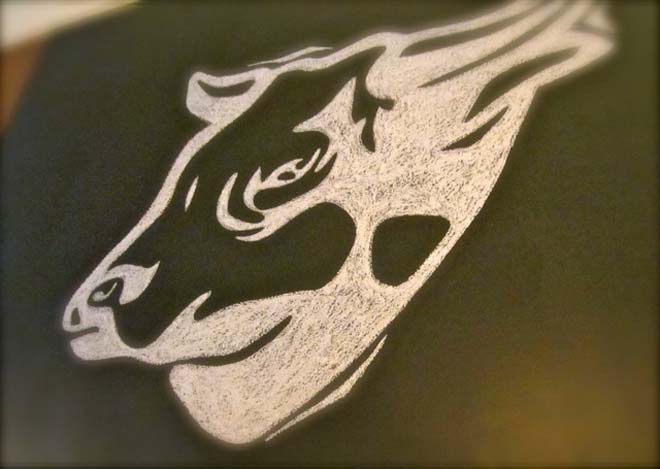 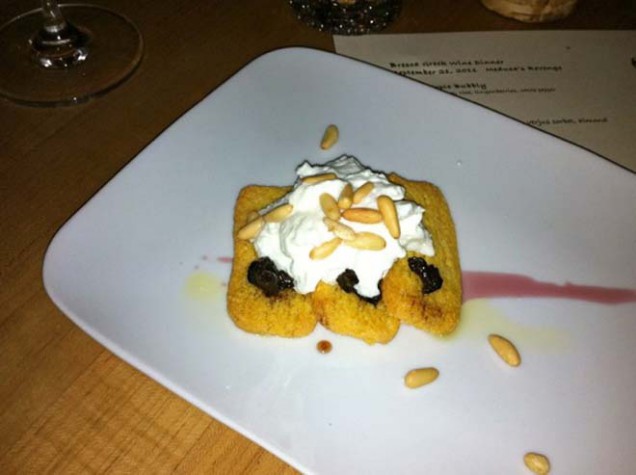 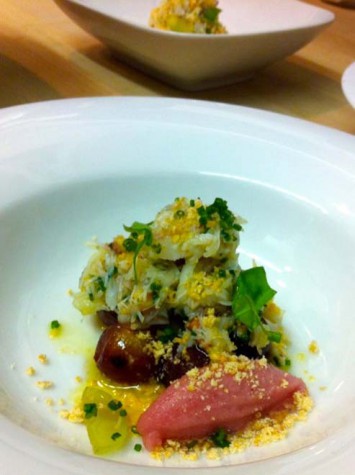 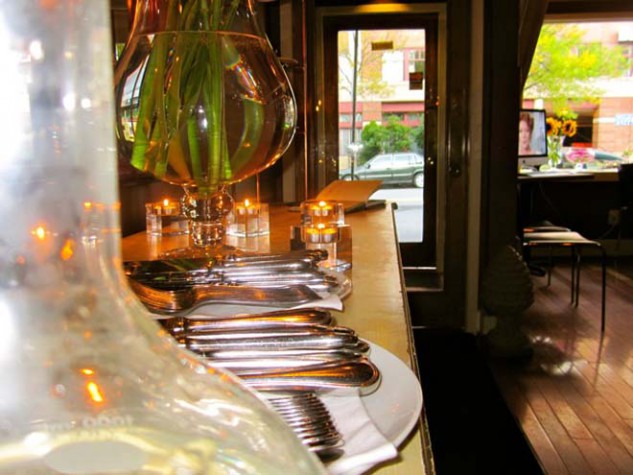 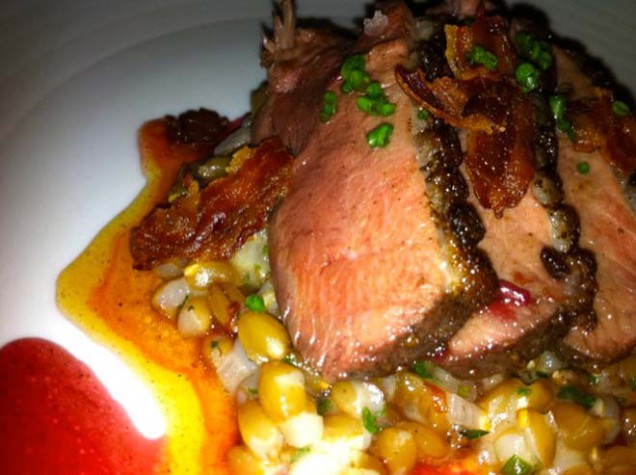 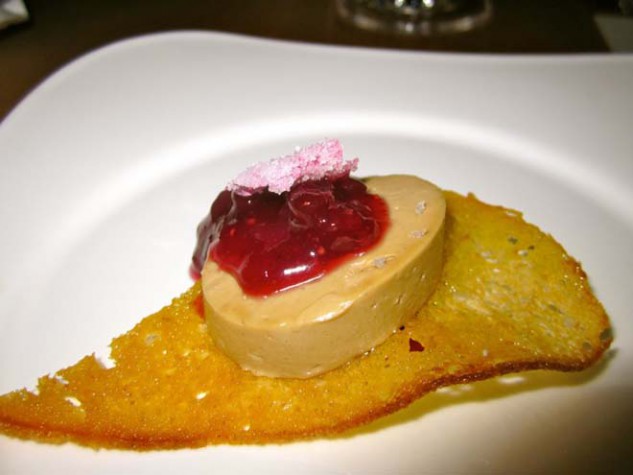 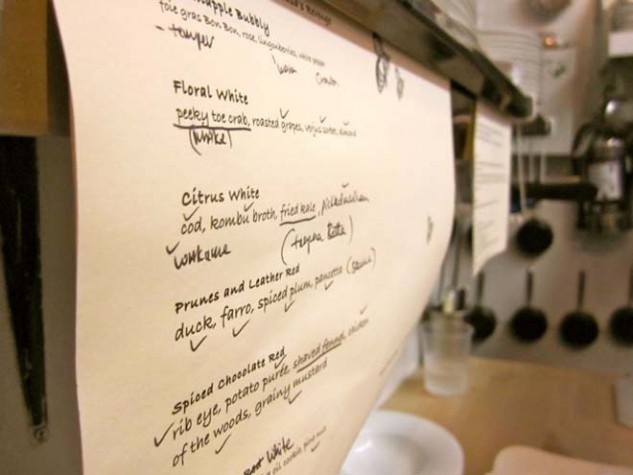 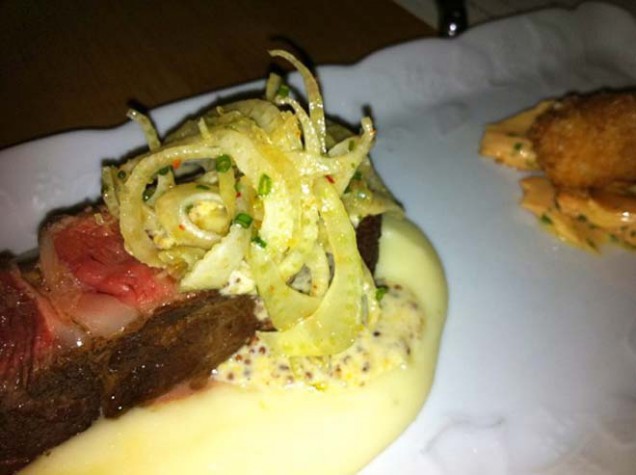 Up until a few years ago, the world of Greek wines remained completely foreign to me. I, like most at the time, associated the entire country’s viticulture with the astringent, piney elixir known as retsina. After spending a good deal of time representing them in the wholesale wine business, my eyes have been opened to a variety of astonishingly great producers, to the point where I have developed a bit of an obsession.

In an effort to spread the word about these wines, I contact Krista Desjarlais, chef/owner of Bresca, about setting up a tasting menu that would showcase their versatility, especially with foods outside of traditional Greek fare. As an extra treat for those lucky enough to get in on the very limited seating for this event, we arrange for a screening of the 1981 film Clash of the Titans (the original, not the remake) during dinner. This is, of course, because nothing builds appetites like the combination of mechanical owls and the Adonis of the ’80s, Harry Hamlin.

Desjarlais has added a creative twist to the menu, describing dishes using simple descriptors pertaining to the wines intended to pair with each course, such as “spiced chocolate red” and “so banapple bubbly.” Additionally, the font size for each course indicates the portion size of the serving. Thoughtful touches such as these are what take this dinner, and others served at Bresca, to the next level.

As the experience begins, we are seated and presented with a glass of Domain Spiropoulos Ode Panos, a sparkling wine from Mantinia made from the moschofilero grape. The soft bubbles give way to a slightly sweet finish of apples and lemon, a flavor profile that seems to be custom designed for the Foie Gras Bon Bon. A creamy, decadent slice of Foie Gras torchon perched atop a crispy, buttery crostini and garnished with lingonberry, fragrant rose petal, and white pepper, is referred to by my dining companion as “the greatest peanut butter and jelly sandwich that has ever existed.”

Due to my insatiable lust for wine I often find I’ve demolished my tasting portion before receiving any food to go with it. This usually creates an uncomfortable situation at wine dinners, singling me out as the “impatient and raging alcoholic” at the table, so it is refreshing to find that Bresca offers each of the featured wines by the glass for an additional charge. In an effort not to be the only one requesting additional servings, every time a new wine is poured I take it upon myself to remind the entire dining room of this policy.
The second course, a wonderful combination of fresh Peekytoe crab with roasted grapes, crushed almonds, and verjus sorbet, finds a life partner in the Domain Spiropoulos Mantinia. Similar to the Ode Panos in that it is made from moschofilero, but different in that it is not sparkling, it has crisp, briny notes that play up the sweet grapes and almonds nicely, in addition to a delicate floral nature that jives with the sorbet.
While I am pouring the third wine of the evening, Argyros Estate Atlantis white, I consider providing my fellow diners with more detailed information than its origins on the island of Santorini and its composition primarily of the assyrtiko grape. I feel obligated, like a good wine salesman, to spin a yarn about some kind of family winemaking tradition or the composition of the soil, but compared to the film’s subject matter of slaying Medusa, releasing the Kraken, and battling giant scorpions, this all seems pointless and mundane.
Far from mundane is roasted cod, resting in a pool of ethereal dashi broth with locally foraged chanterelle and black trumpet mushrooms. A single piece of airy, tempura fried kombu sits neatly atop the crispy cod skin. The acidity of the wine in tandem with the umami characteristic of the broth is quite pleasant, as is the burst of citrus fruit with the flaky fish.
Anyone who is a frequent patron of Bresca knows that Desjarlais has a way with duck breast. Seared to a juicy, perfect medium rare, the bird is sprinkled with salty, crispy pancetta and served on top of toothsome, exotically seasoned farro and spiced plum. Each component of the dish is elevated by the velvety Argyros Estate Atlantis red, as it does a fine job showcasing the earthy prune and leather tones of the mandilaria grape.
The final savory course is a grilled, sensually marbled rib-eye steak, served with juices flowing into a silky potato puree. Grain mustard sauce and crunchy fennel act as garnish for the meat, that has been cooked to a perfectly rare temperature, but somehow remains warm throughout and melts in my mouth much like braised short ribs might. I have no idea how this has been achieved, but it is absolutely elysian. The second half of this presentation, crispy fried lamb sweetbreads and earthy chicken of the woods, damn near brings me to tears, almost causing me to forget all about my wine. Missing out on the Thymiopoulos Vineyards Uranosa dense, nebbiolo-esque red made from 100 percent xinomavrowould have been a grave and foolish mistake. Its big tannic structure softens right up next to all of the luscious fat on the plate, allowing the deep flavors of berries, baking chocolate, and spice to work their magic.
The movie madness draws to a close with one course to go, and the wine being poured is what can be referred to as the “grand cru of retsina” from Gai’a Wines, based out of Athens. It is much more refined than the retsina I spoke of earlier, made from the roditis grape and mixed with resin from the Pinus Halepensis tree. The aroma reminds me of eating a lemon in the middle of the forest, in a good way, if you can imagine that. To tame the intensity, we are presented with warm olive oil cookies fresh out of the oven and draped in rich, tangy feta, pine nuts, and candied kalamata olives. The expressions on diners’ faces are priceless as they experience the transformation of the wine when enjoyed with the many flavors of the dessert.
The reason for posting my account of an event that has passed by is to remind you that anytime you have the opportunity to attend a wine dinner at Bresca, you should jump at the opportunity. Creating food that is as visually appealing as it is delicious, with an eye for exciting details, Chef Desjarlais has been responsible for several of my most memorable dining experiences.
Once again, the gods have been pleased.
111 Middle St. | Portland | 207.772.1004 | restaurantbresca.com