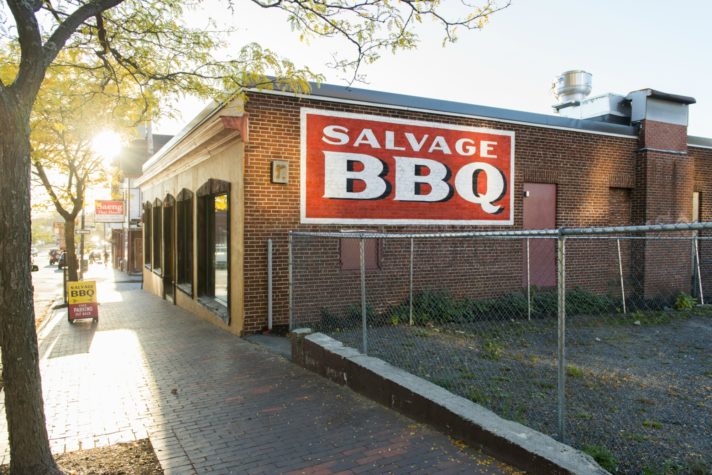 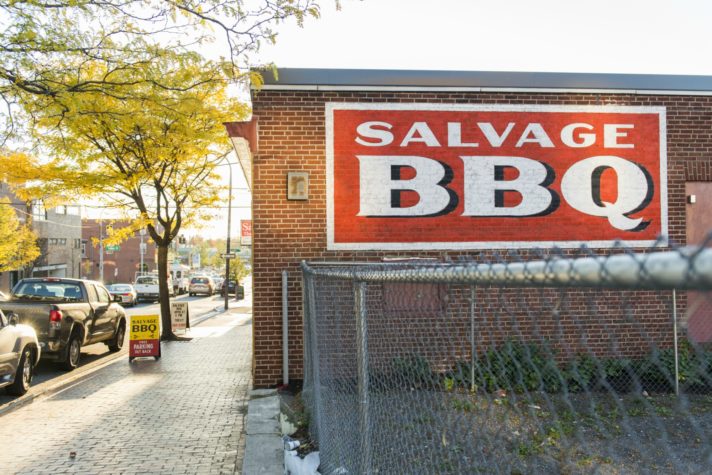 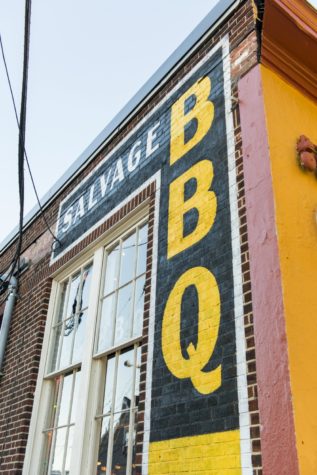 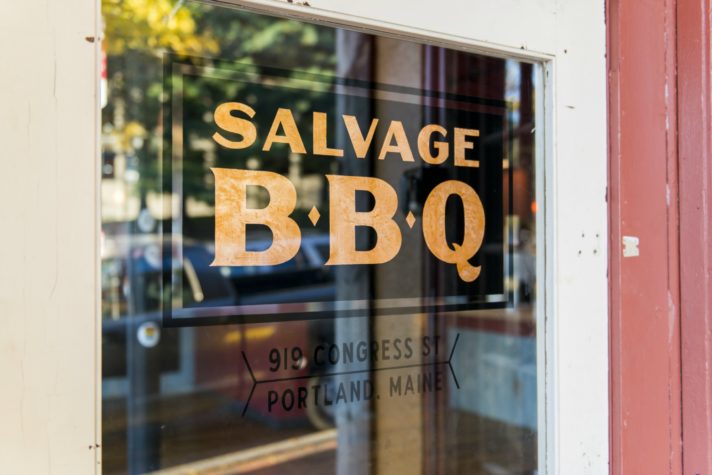 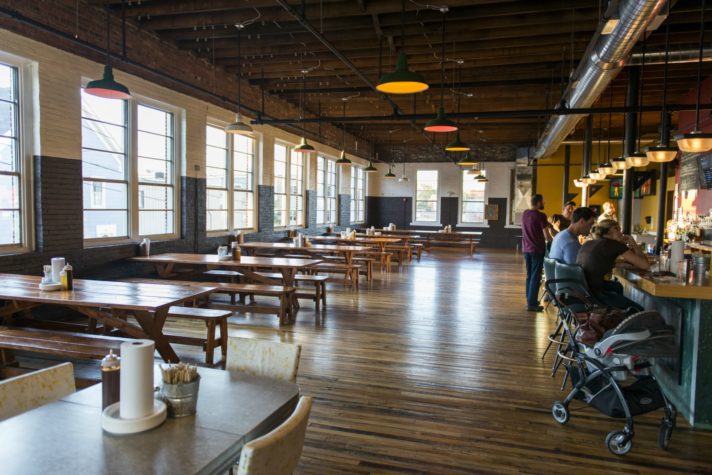 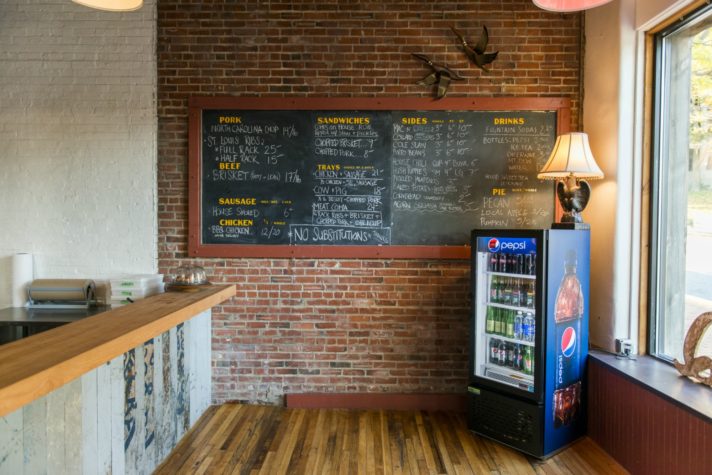 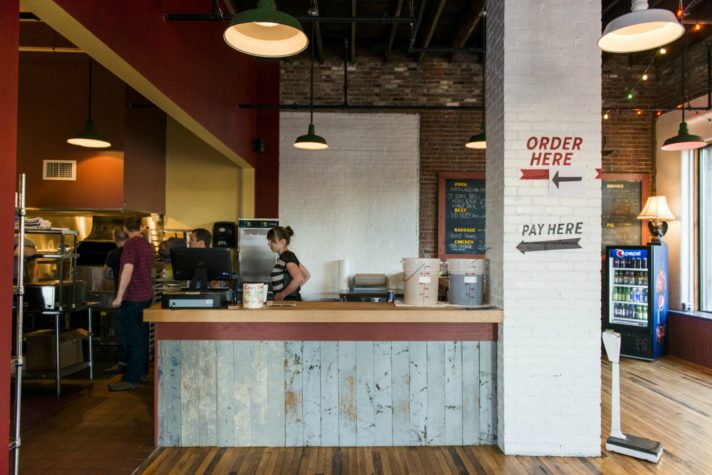 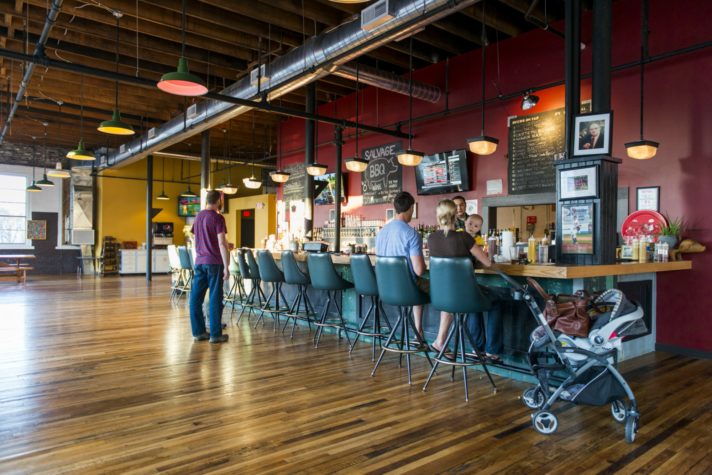 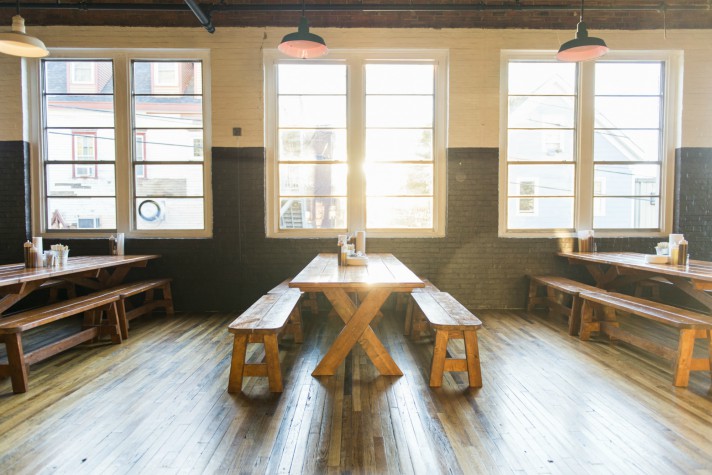 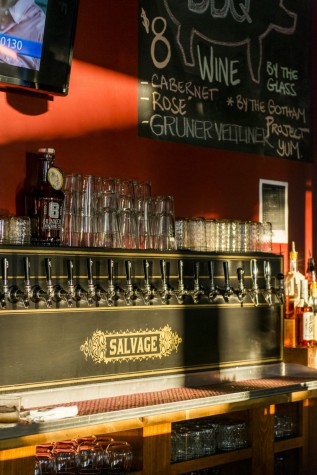 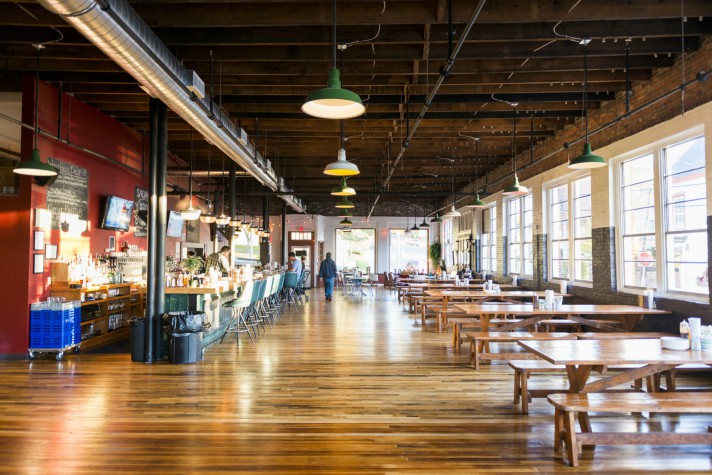 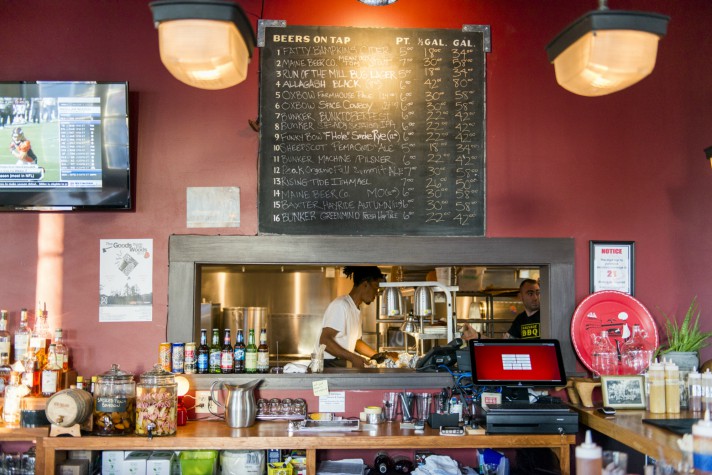 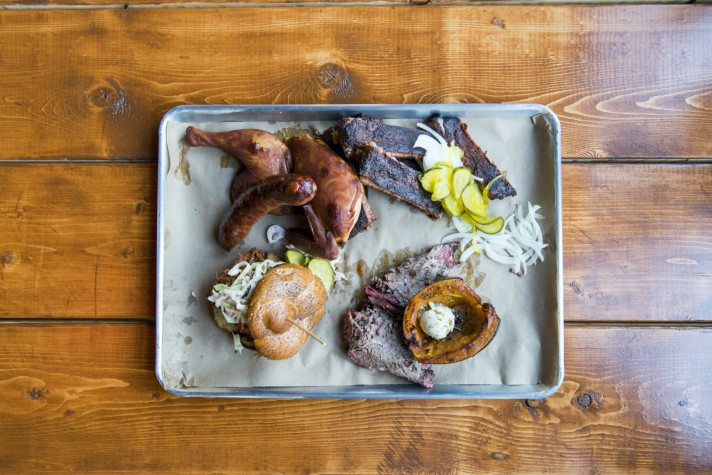 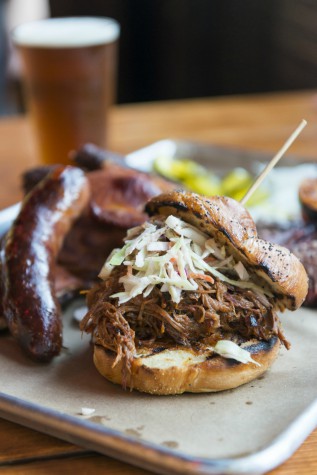 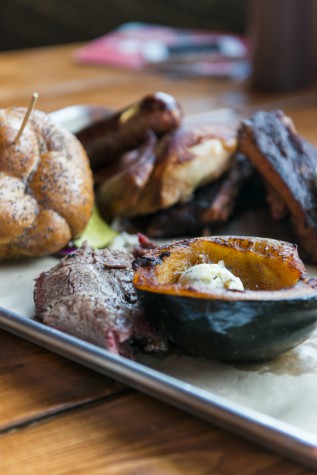 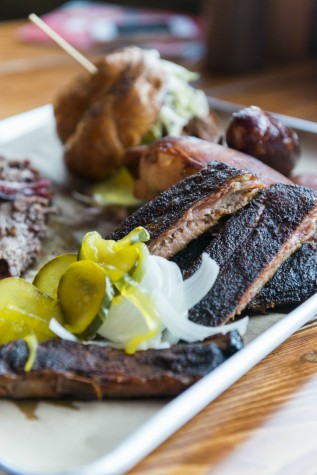 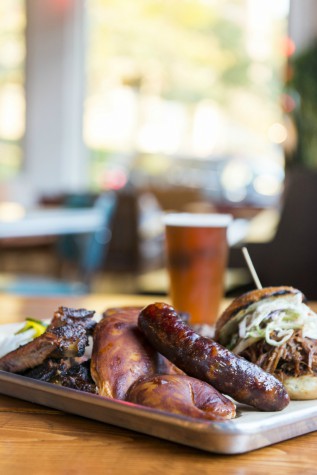 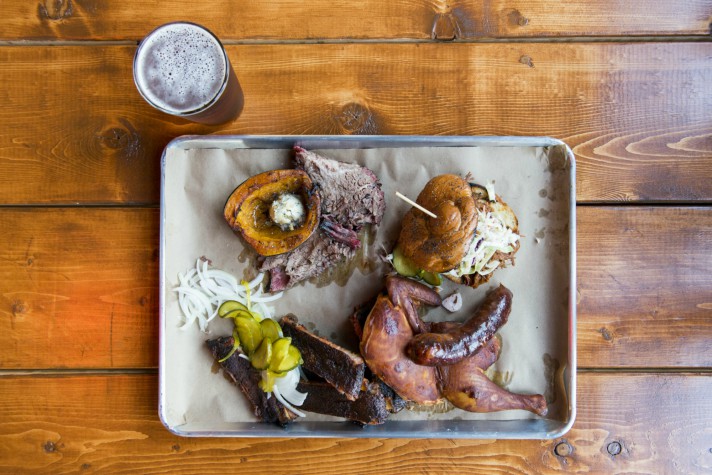 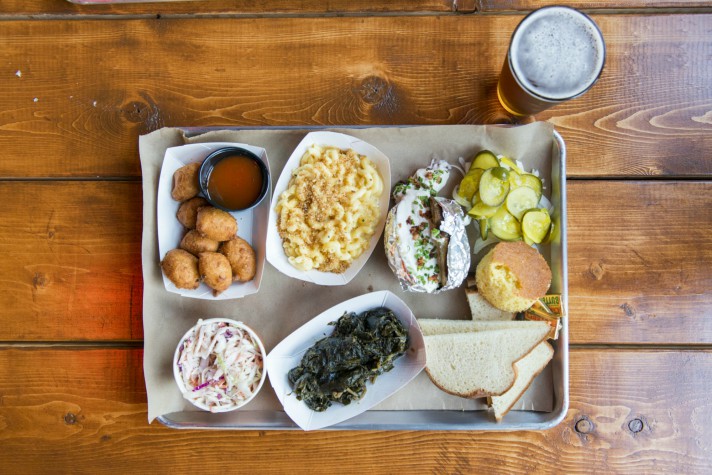 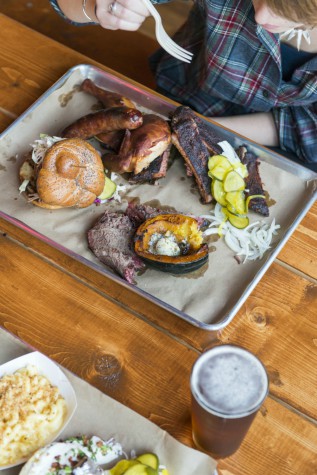 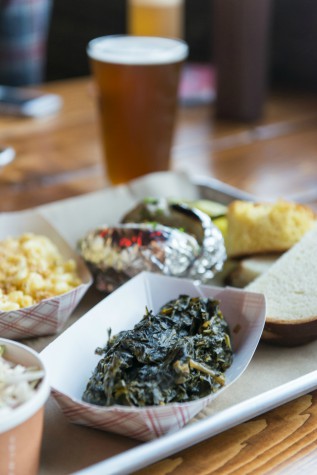 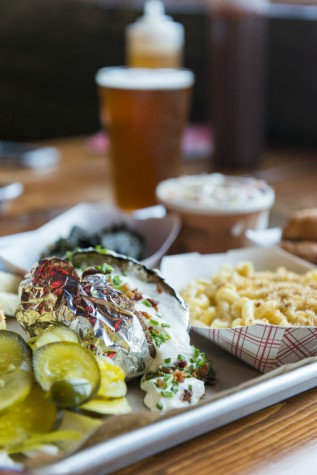 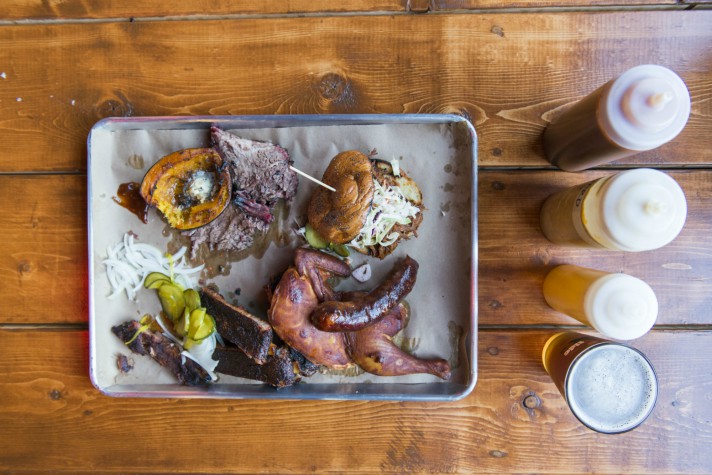 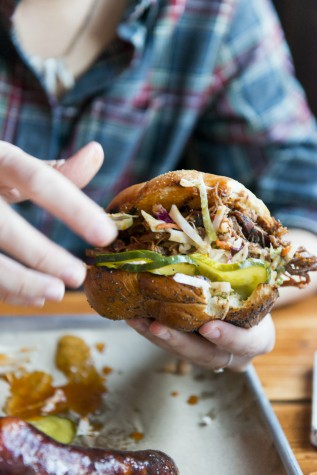 Despite its reputation as backyard cuisine, barbecue is one of those things that’s easy to do decently, but very hard to do well. Cook a slab of meat for long enough at low enough heat, and chances are it will come out fairly well. What pushes it over the edge from good to talking-with-your-mouth-full tasty is nearly always the sauce, the seasonings, and the rub. Judging by the multitude of flavors at his newest restaurant, Jay Villani, owner of Sonny’s, Local 188, and now Salvage BBQ, gets that. Saucy, spicy, smokey, briny, it’s all on the menu at the cavernous, casual new eatery.

It was shortly after work on a Thursday evening when staff photographer Sean Thomas and I strolled into Salvage. We were early enough that business was slow, but as we ate, we watched the space fill up with gleeful kids out for a family dinner, couples enjoying a laid-back date, and groups of friends mingling at the bar. Large windows let the golden hour seep inside, while twinkling lights and offbeat decor kept the large space feeling cozy and fun. As usual, I decided that instead of ordering individual meals, I would let the chef and servers decide what we needed to try. The only thing I made a point to ask for was a sample of the North Carolina-style sauce, since it seems to be something of a rarity this far north. ”There are two bottles on the table,” the helpful server informed me. “You’re going to want the lighter one. It’s really good.”

And good it was. For those unfamiliar with this type of barbecue, North Carolina-style sauce is far more acidic than its sweeter southern cousins. Its bright, both in color and flavor. Vinegar and mustard are the two distinguishing tastes, but most sauces have a hint of smoke and brown sugar. While Salvage offers several location-named sauces, North Carolinas was the standout, especially when poured onto juicy, thick pieces of barbecued chicken. However, I don’t want to shortchange the St. Louis sauce; this darker, sweeter mixture paired perfectly with the heavy meats like brisket or baby back ribs. Thanks to the generosity of the kitchen, we got to try every meaty morsel on the menu, and they were all fantastic. Smoked for 17 hours and, in the case of the chicken, brined and crisped, the meat at Salvage is treated with the respect it is due. The result is homey and filling.

But good barbecue is rather boring without good sides, and Salvage has plenty of sides to choose from, from the classics (potato salad) to the slightly unexpected (sweet roasted acorn squash). The collard greens were greasy with animal fat and soft and flavorful from prolonged stewing. The coleslaw was lightly dressed, making it a nice complement to the heavy meal, and the mac & cheese was creamy, soft, and entirely without pretensions. I found the hush puppies rather boring, but perhaps that’s because I didn’t order a side of pickled jalapeños. “I pulled apart a hush puppy and stuck a pickled pepper in there like a sandwich,” my coworker Chris Kast revealed after his first visit to the new dining destination. “It was awesome.” And in case good old-fashioned mac & cheese isn’t exciting enough for you, Chris suggests adding some peppers to that dish, too.

With multiple sauces, plenty of peppers, and easily mixable sides, Salvage has a menu that can be customized for your tastes. A dash of hot sauce here, an extra pickle there, and soon you’ll be swapping your Maine-made IPA for some Kentucky bourbon and pretending your latitude is much, much lower. End the meal with a slice of peach pie, and you’ll completely forget the coming snow.