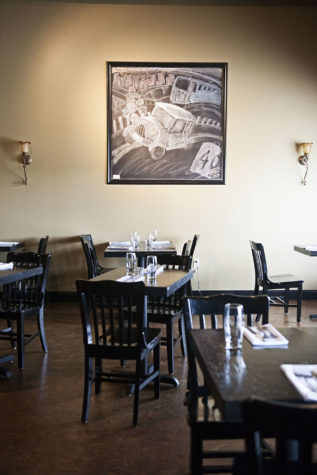 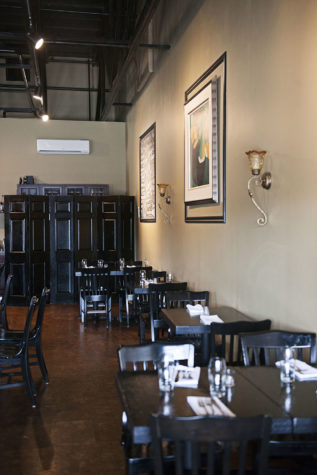 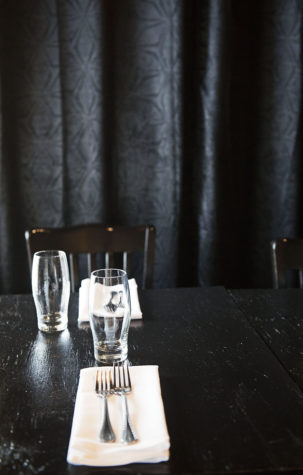 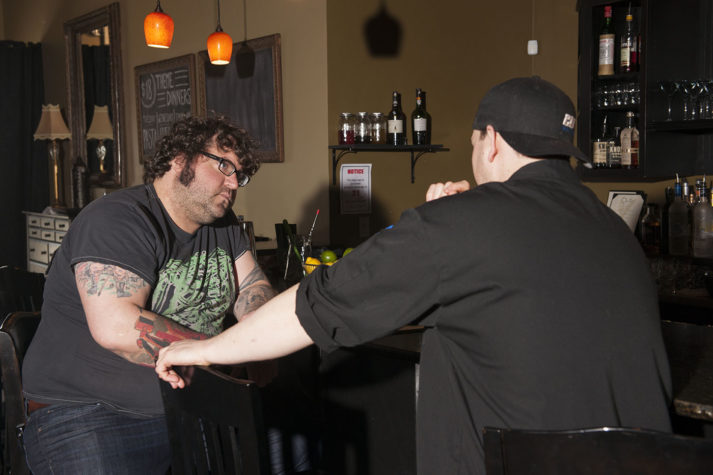 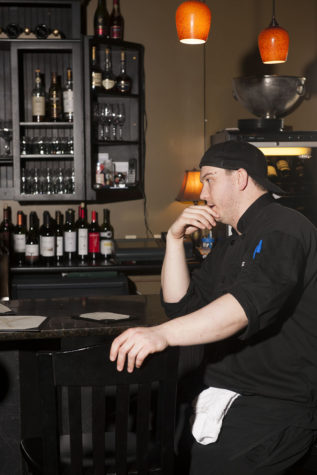 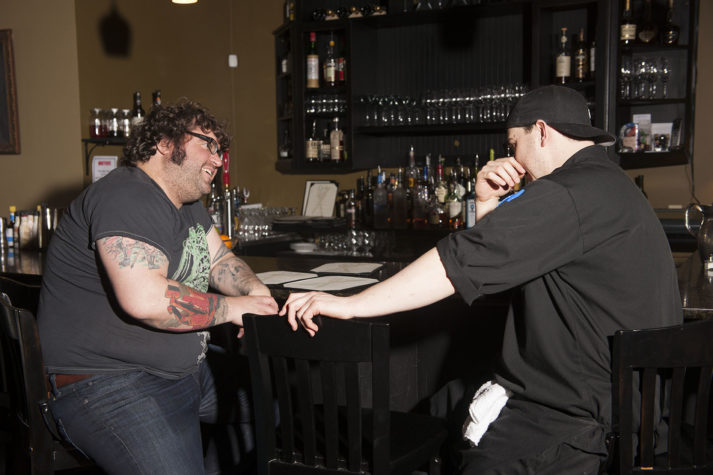 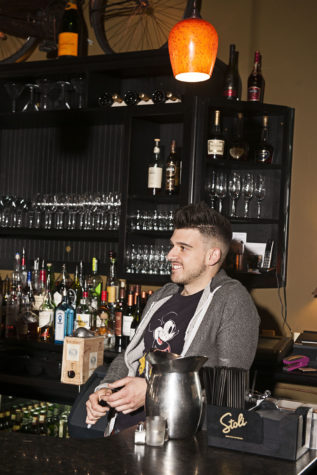 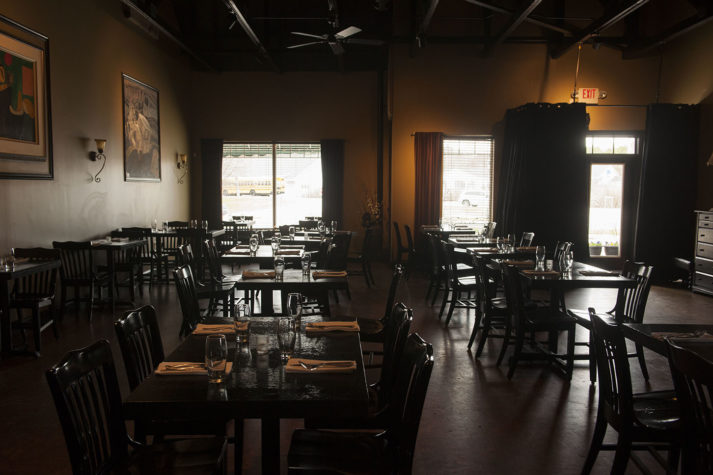 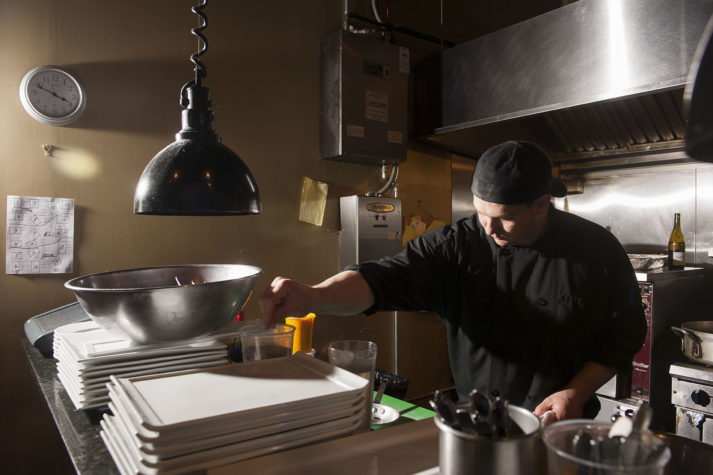 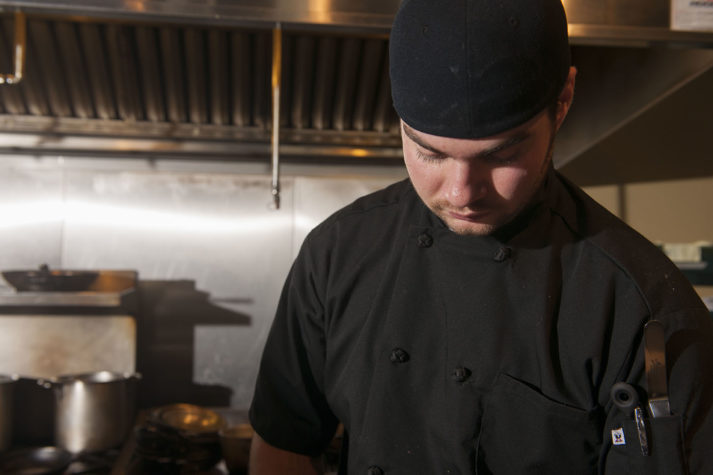 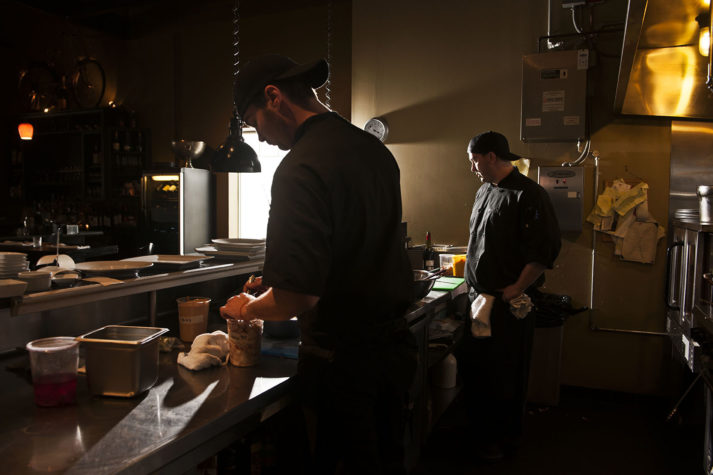 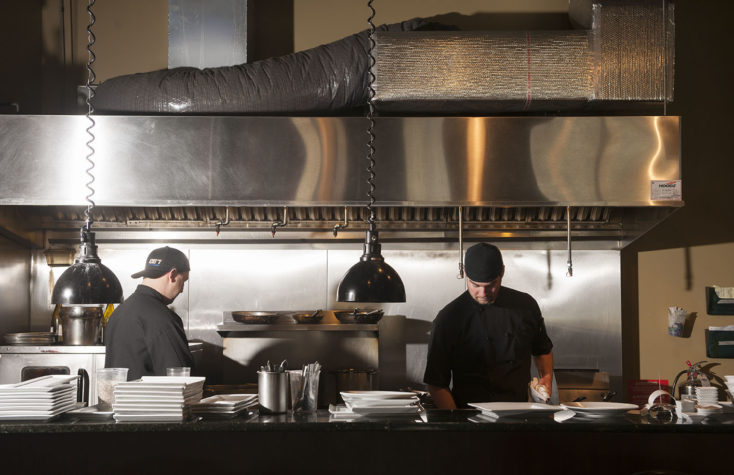 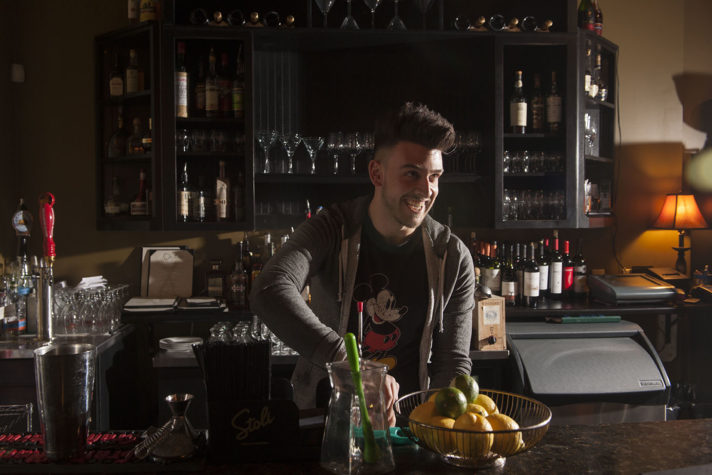 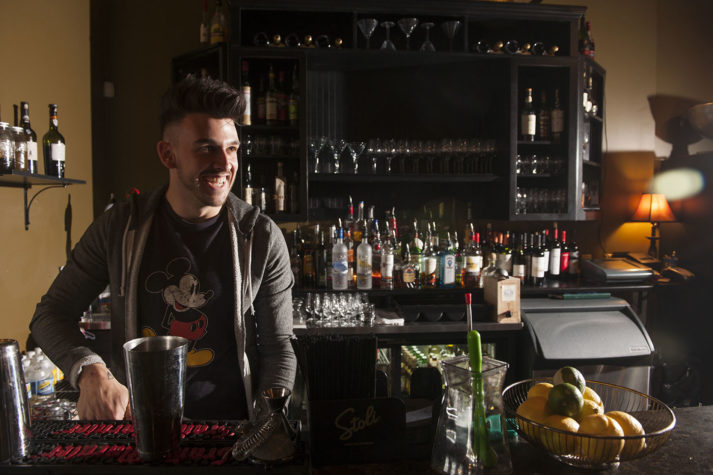 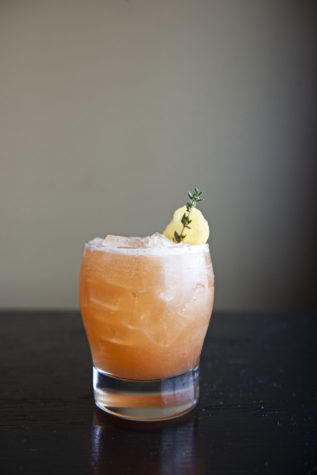 The cocktail list is meant to stylistically parallel the food. 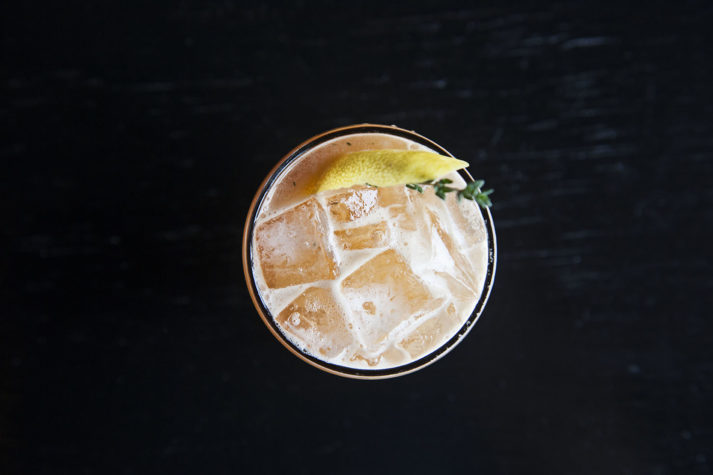 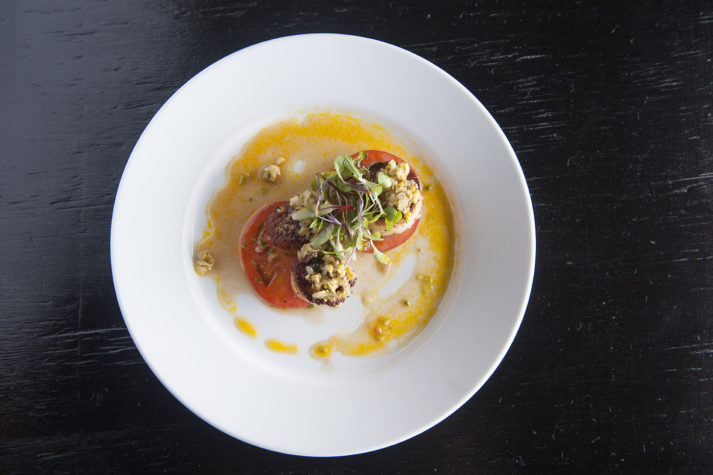 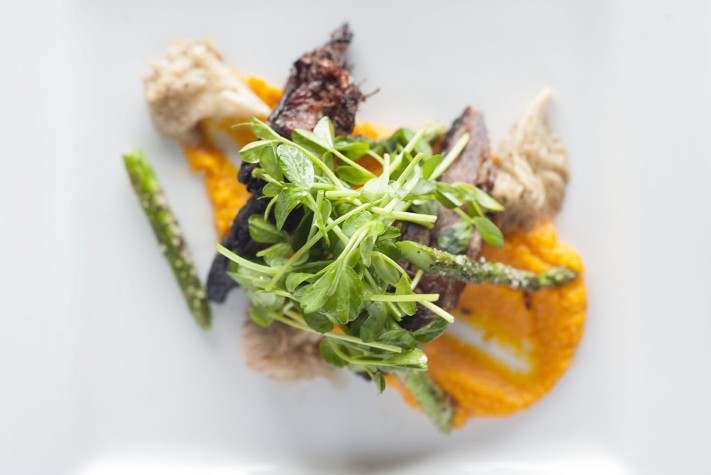 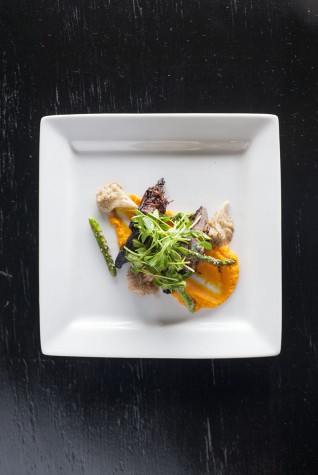 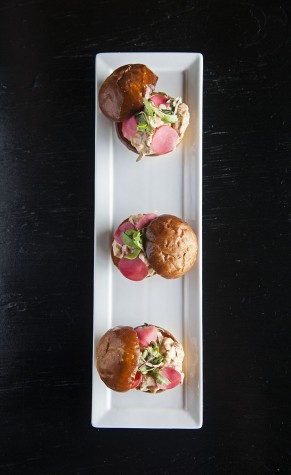 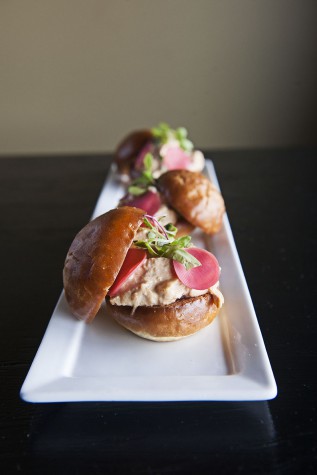 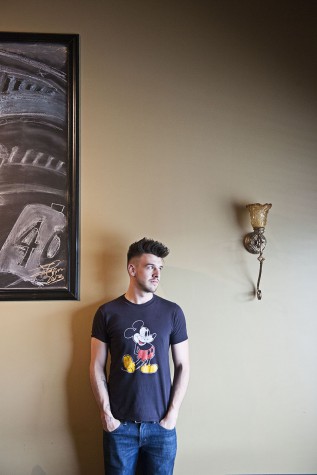 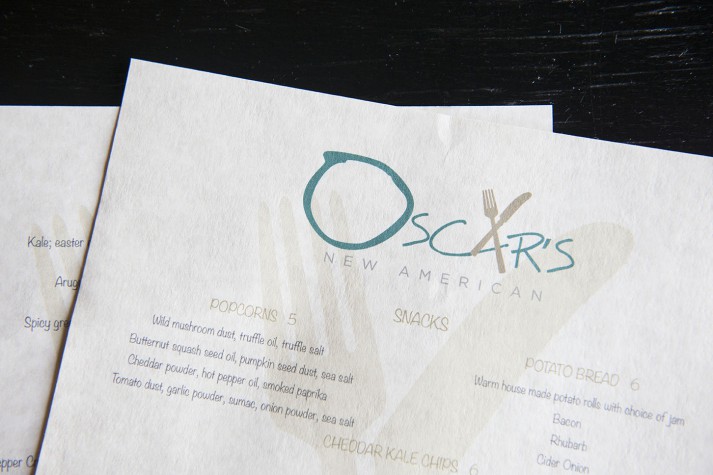 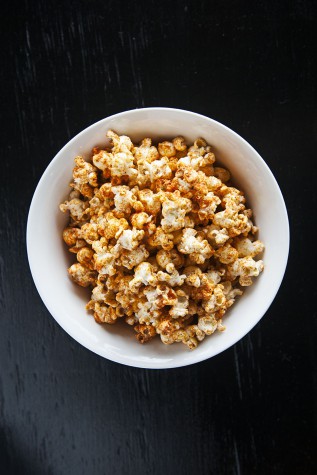 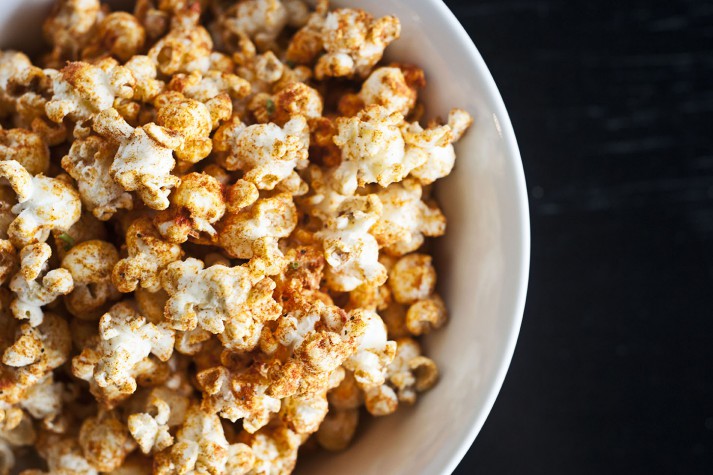 The popcorn appetizer is tossed with hot chili oil and smoked paprika and dusted with cheddar powder. 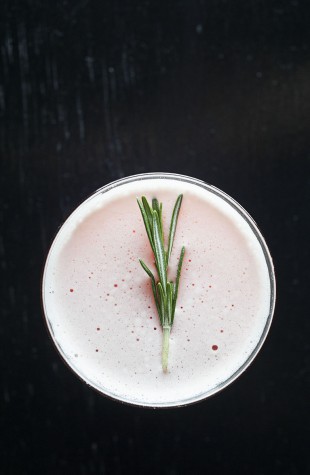 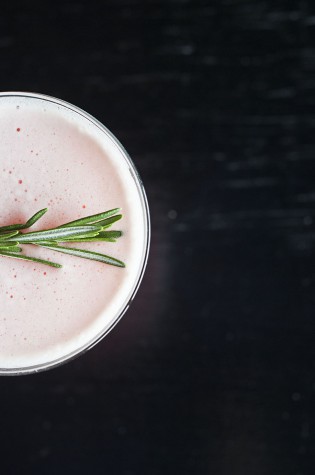 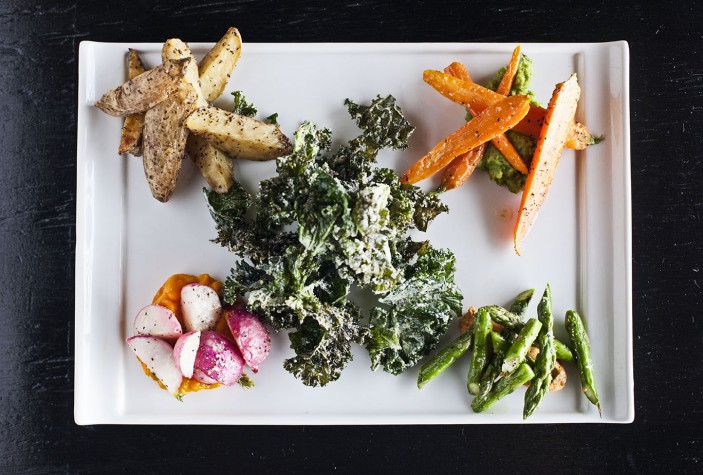 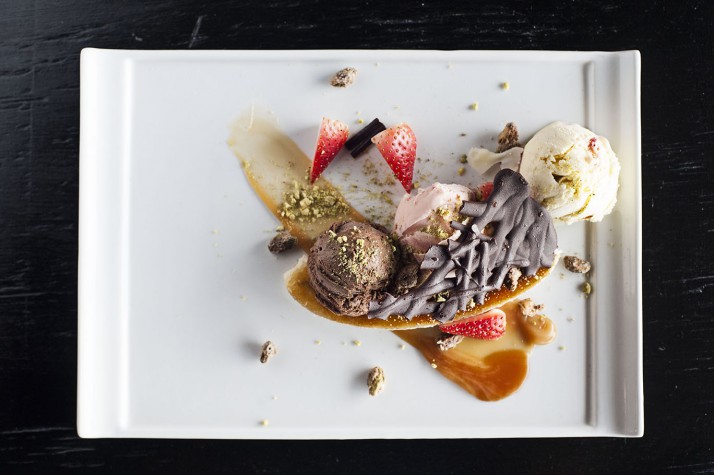 The banana split with brown sugar marshmallow sauce and chocolate ganache is served over three flavors of ice cream. 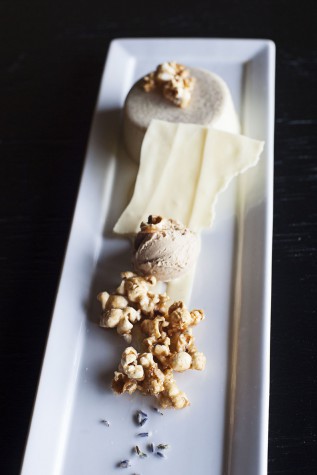 Krunkkala says, Dessert is often the last thing people have at your restaurant, so it is absolutely crucial that it be memorable.

I interpret it as a good a sign that when chef Nick Krunkkala is describing his menu to me, I get the impression that he is making himself really, really hungry. This is the kind of person that you want cooking your food, someone who would happily devour every single item and love every minute of it. That’s what it’s all about, isn’t it?

Oscar’s New American is housed in a somewhat unlikely location off Route 1 in Yarmouth that you may not notice unless you’re looking for it. Once inside, the décor is unassuming yet cozy, allowing the food and drink to be the primary focus, and rightfully so.

Outside of a one-year culinary school education, Krunkkala’s approach to cuisine is from the heart—the kind of cooking that you would be just as happy eating at the restaurant or at home on your couch. His menus are sourced from his experiences and people he has cooked with in the past, and he freely changes them to the point that paper and ink costs from reprinting are “actually somewhat of a concern.” If he feels even slightly bored with a dish, he assumes that the customers could get bored and immediately gets to work updating and tweaking.

Often the elements of each dish are classic combinations that Krunkkala reimagines in his own way. The lamb belly, for example, is served with a delicate carrot puree, grilled asparagus, and fresh lion’s mane mushrooms. The meat is rubbed with garlic and rosemary then slowly braised for several hours in champagne vinegar and white wine, and finally is topped with pea shoots that are dressed in a lemon and mint vinaigrette. Plenty of familiar combinations, appropriate to the season, but still with a unique flavor and texture.

Other times Krunkkala’s intent is to capture an experience like the butter-poached lobster in smoky tomato mayo with sweet corn shoots, and pickled hakeuri turnip served on a buttered brioche roll. “To me, this has everything a Maine lobster bake does – smokiness from the fire, fresh lobster, lots of butter, and sweet corn,” says Krunkkala. “The pickles are just because I like them on a sandwich.”

Many menu items make multiple appearances like the smoked tomato mayo that is slathered on their version of the BLT. For this Krunkkala employs a warm potato roll (made from leftover mashed) and tops it with fresh tomato, Bibb lettuce, and slow-cooked bacon jam that he insists he would put on everything, if he could.

The experience at Oscar’s could also consist of sitting at the bar enjoying cocktails and an assortment of popcorns—a particularly delicious bowl is tossed with hot chili oil and smoked paprika and dusted with cheddar powder, resembling what I can only describe as Smartfood on steroids. Rabbit confit “nachos” – served with melted cheese, rhubarb jam, and pickled leeks on fresh potato chips – would also fit the bill for ideal “drinking food.”

Throughout the week, Krunkkala makes multiple trips to farms around the state to procure the right ingredients: he gets maple syrup, fiddleheads, strawberries, and corn from a guy named Froggy in Union, and gets most of his other produce at Morning Dew Farm in Newcastle. He gets his mushrooms from some guy who grows them in a small warehouse on Forest Avenue in Portland, and picks up lobster from his old lobsterman friends. “You develop a lot more respect for the product when you see the ground or water that it came from. These are the things that really excite me at this stage of my life,” says Krunkkala.

This fresh-grown reverence is showcased brilliantly on Krunkkala’s veggie plate, which has roasted baby carrots over a fresh pea puree with grilled radishes, roasted fingerlings, and caramelized shallots. He tells me the veggie plates especially are a way of “staying true to the ingredients that I’m blessed to be able to work with.”

Bar manager Trevin Hutchins gave up a profitable bar gig in Las Vegas to help Krunkkala open the restaurant. He is on his second incarnation of a cocktail list meant to stylistically parallel the food. The Green Acres is a fizz made with Plymouth Gin, chartreuse green, lime, egg white, dill, and cracked pepper. The Norman Rockwell mixes Wild Turkey Bourbon with Amaro Montenegro, lemon, cranberry bitters, and rosemary. Both successfully marry ingredients into a cold glass. “Since I’m the only person working behind the bar, I don’t worry about inconsistency,” Hutchins explains, “I taste every cocktail before it goes out.”

The responsibility for creating a delicious end to the night falls on the shoulders of pastry chef Hannah Ecker, who, like Krunkkala, does not have much formal training, but grasps the intuitive sense of what makes things taste delish. Krunkkala admits, “I had to swear off her lavender white chocolate panna cotta. I simply cannot stop eating it once I’ve had a bite.”

Krunkkala says, “Dessert is often the last thing people have at your restaurant, so it is absolutely crucial that it be memorable.” I will attest that it is certainly hard to forget their banana split with brown sugar marshmallow sauce and chocolate ganache that is served over three flavors of ice cream: bruleed banana, candied pistachio, butter caramel.

Krunkkala sums it all up when he tells me, “Basically, I want every single thing I cook to be better than anything I’ve ever made.”

This is a challenge that is worth taking him up on.