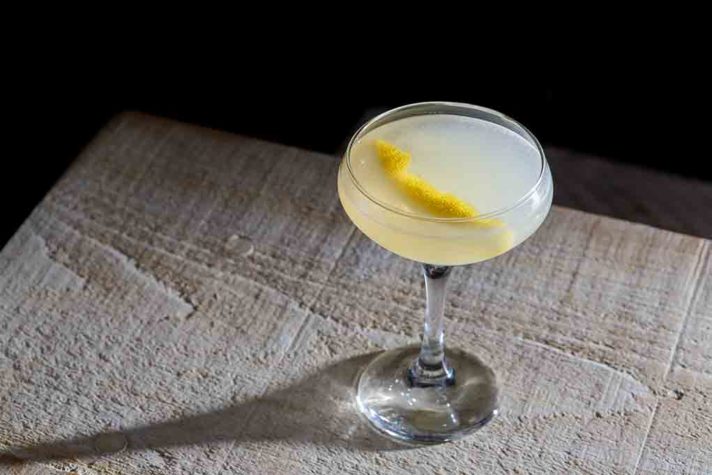 It’s probably safe to say that few businesses have been inspired by an abundance of persimmons, but that’s what launched Owl and Whale. In 2014 Michael Gatlin and Sam Babcock were running the inventive bar program at Sur Lie restaurant in Portland when they decided to make bitters with leftover persimmons, adding vanilla and arbol peppers to the exotic fruit for a round, earthy flavor and a spicy kick. While their company now makes eight different bitters, three acid phosphates, and three shrubs and ships its products to six states plus Greece and Australia, the persimmon bitters remain Owl and Whale’s best seller. “It plays really nicely with gin, and is great in a Manhattan,” says Gatlin, adding that the persimmon bitters are also a particularly fine substitute for the orange bitters called for in the original martini recipe.

Much about Owl and Whale reflects the vintage aesthetic that often infuses contemporary cocktail culture. The company name refers to eighteenth-century terms for certain tavern regulars; an owl was the wise late-night occupier of a bar stool, and a whale was the heavy-drinking big spender who bought rounds for the house and left generous tips. Perhaps both types will frequent Owl and Whale’s new retail shop and tasting room, opening early this spring in Portland, which now boasts six distilleries and multiple craft cocktail bars. “Having been a beer-heavy town for much of its life, it’s great to see the resurgence of distilling,” says Gatlin. “Having half-a-dozen gins at our disposal really gets our creative juices flowing.”

Pirate Smile
By Michael Gatlin, from a series of recipes based on the Elton John song “Tiny Dancer.”

Shake all ingredients over ice and double strain into a coup glass. Garnish with lemon peel.