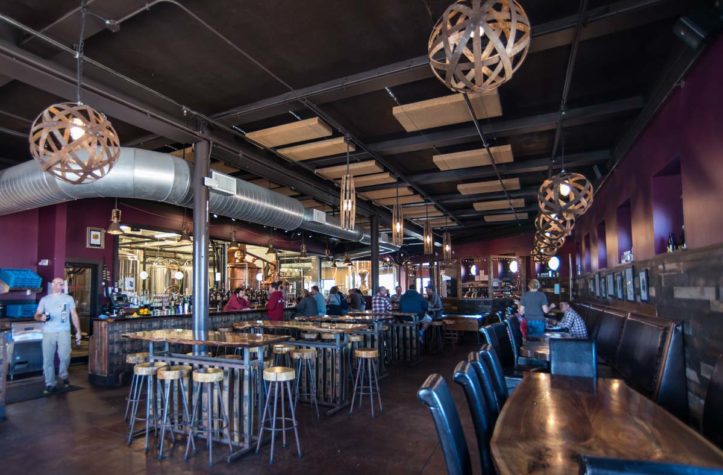 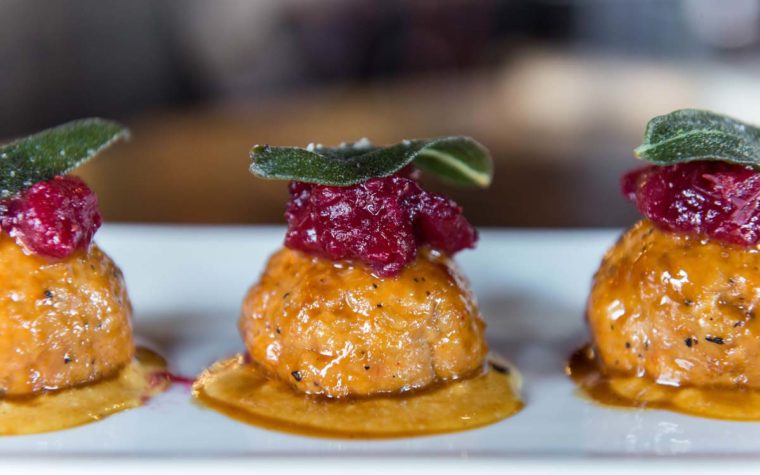 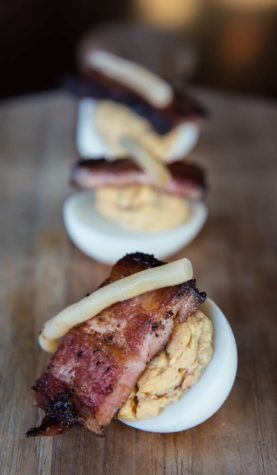 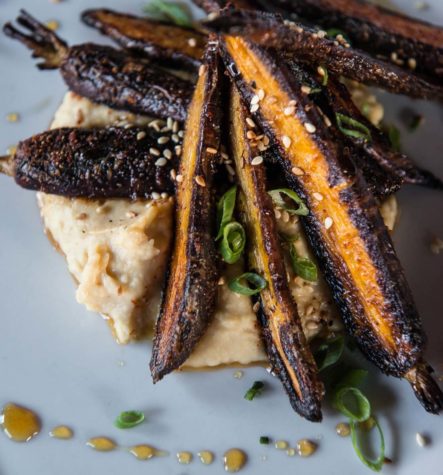 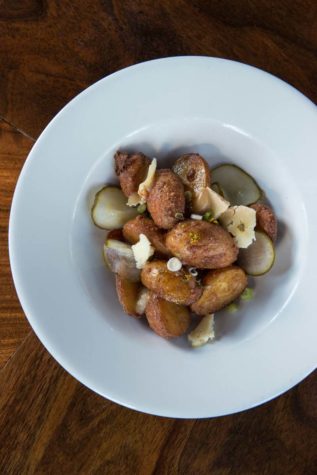 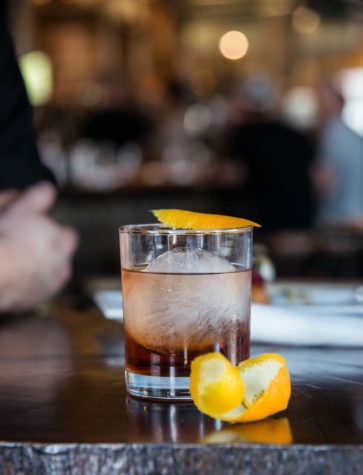 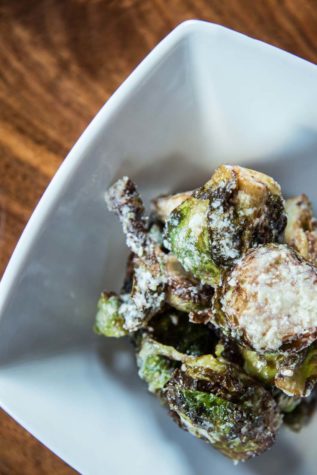 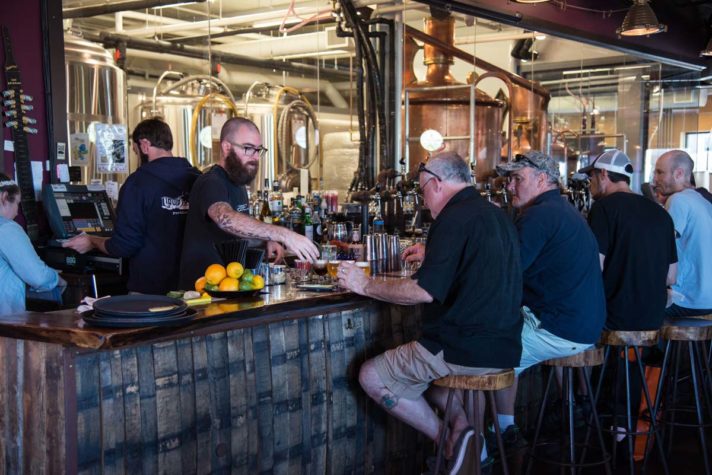 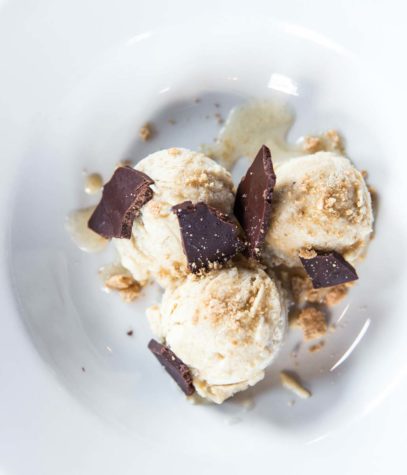 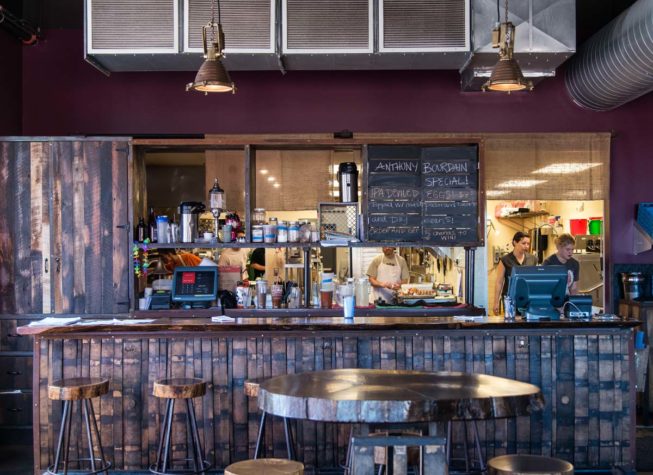 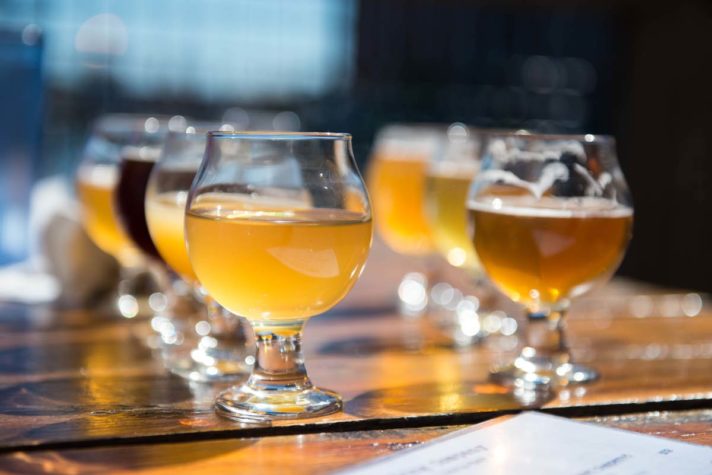 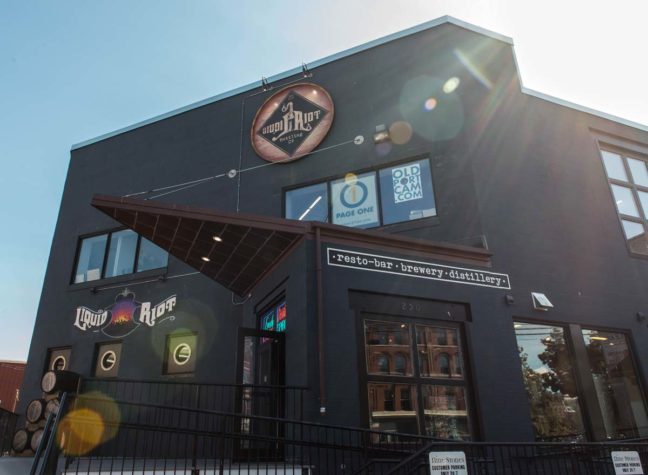 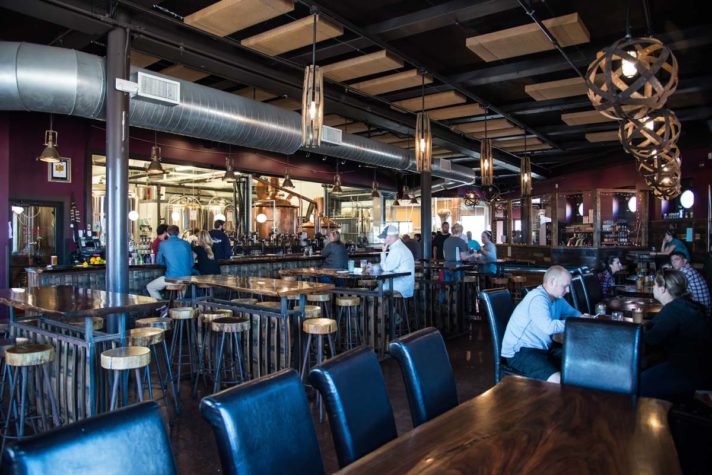 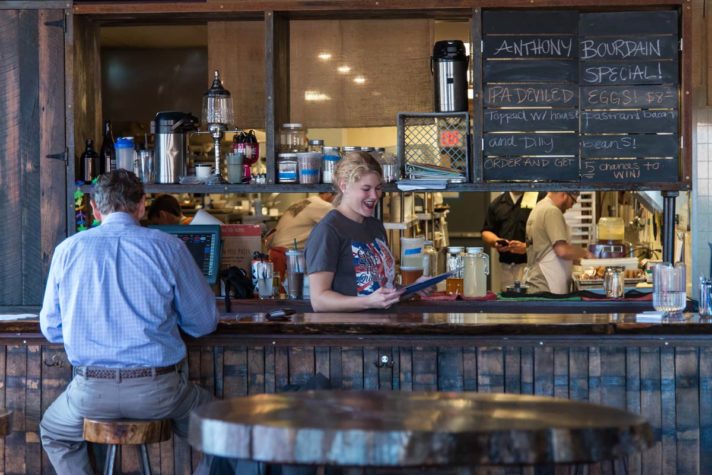 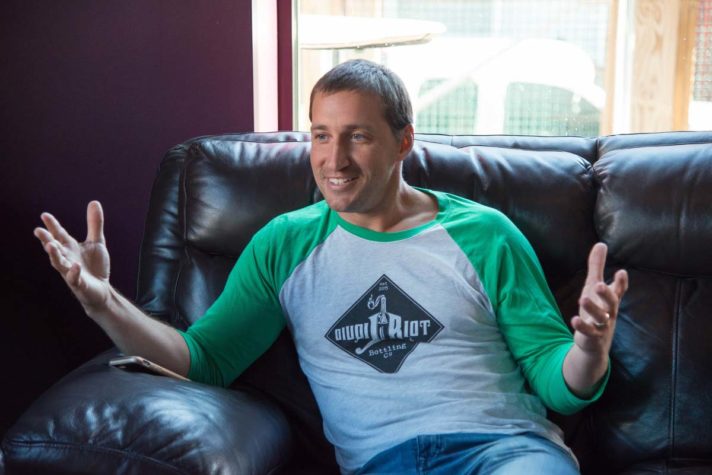 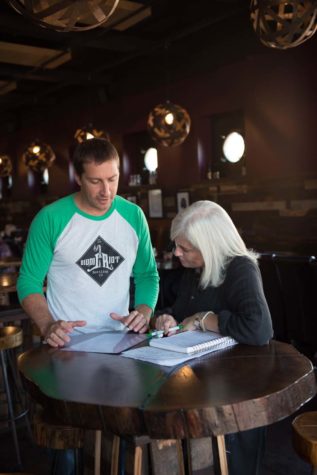 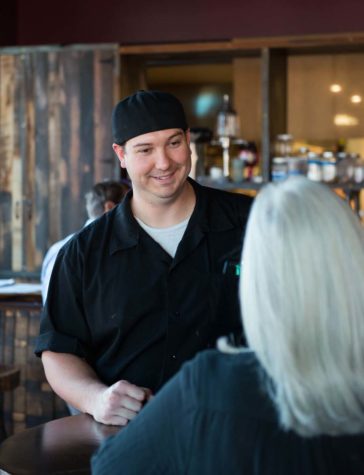 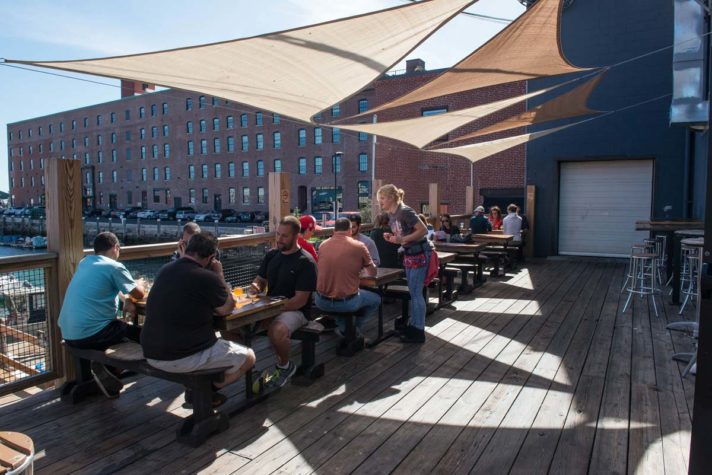 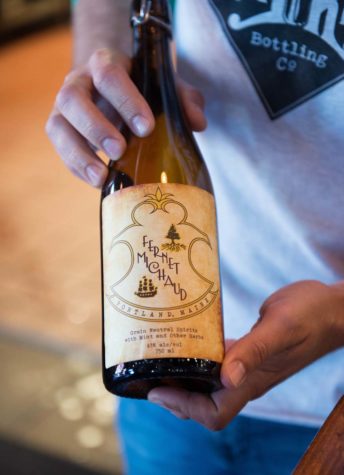 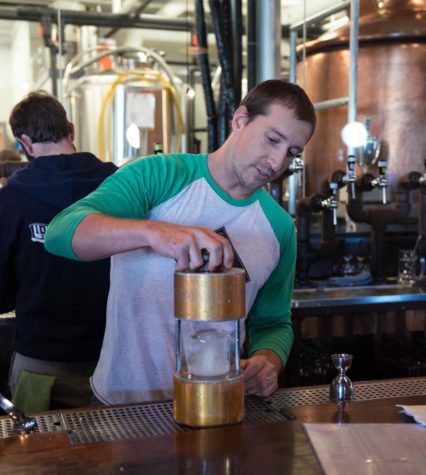 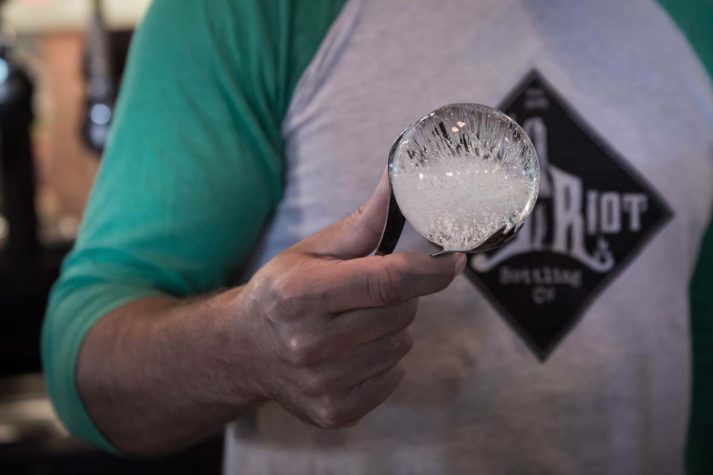 Eric Michaud is intensely passionate about beer. Not only is he the founder of Novare Res Bier Café, the Old Port mecca for imported beers, but he is also the proprietor of Liquid Riot Bottling Co., a busy brewery, distillery, and resto-bar on the Portland waterfront.

His interest began in his teenage years, brewing beer in his parents’ kitchen. He has studied, watched, and learned about beer and spirits all over the world, from sake breweries in Japan to Trappist monasteries in Germany and Belgium, where monks have brewed beer to sustain their communities for centuries. And after traveling through 23 countries in ten months with his wife, Michaud returned to Maine to start both a family and a business.

“My true passion is creating,” he tells me, as we settle into the big leather sofas in the corner of Liquid Riot. “Novare Res is buying and selling someone else’s product. I love making the recipes and brewing. If you can brew something, you can distill it.” I am offered a short lesson in the difference between the two, and while many drinkers probably already know this, I find it fascinating. There are two huge, glassed-in rooms at Liquid Riot, one for brewing beer and the other for the distillation of spirits. The beer offerings change constantly, with up to 16 on tap at any time. There are stouts and porters, the ever-popular IPAs, and Belgian-style brews. Four-ounce tasters are available so you can compare and find your favorite. “Maine is a beer-drinking state,” he continues. “It’s one of the first places to have a craft brewery.” At the distillery, there are a variety of whiskies and rums, a vodka, and even fernet, an herbal digestif that bears Michaud’s name. Those fine spirits are crafted into excellent cocktails, such as the Haute Fashioned, featuring Liquid Riot Old Port bourbon, cinnamon syrup, bitters, and an ice ball. Michaud pulls out a heavy aluminum press he purchased in Japan, and in about 30 seconds, demonstrates the making of a perfect ice sphere used in the cocktail.

The Liquid Riot space is impressive, with a long bar made of barrel staves looking into the brewing room, industrial lighting, and heavy wooden tables, all fashioned by Michaud’s father and brother. There are communal tables for large groups, and plenty of comfortable seating. On a warm day, there may be no better place than the outdoor deck overlooking Portland’s working waterfront. Six months ago, chef Nick Krunkkala joined Liquid Riot. “It’s not typical pub food,” he tells me. “I use our beer and spirits in almost every dish. I’m getting to know the different styles and methods and will create dishes to go with the flavor profiles. It’s the same principle you would use with wine, but I think beer is more fun to cook with.” He’s making the most of the ingredients at hand, using them in a menu that’s surprisingly vegetable heavy. “People are really interested in trying things beyond burgers,” says the chef. “And it takes a lot more skill to prepare vegetables well.” He shows off that talent with a beautiful plate of roasted organic carrots that are finished on the grill for a nice char. They’re served with roasted garlic hummus and drizzled with smoked honey reduced with Old Port bourbon. “They go well with a crisp beer,” Krunkkala says. Stout ranch potatoes with pickles, soft, local cheese, and a shower of cheddar-tomato powder are also deliciously beer friendly. The cooler weather will bring new dishes, like crispy Brussels sprouts with hot apple vinaigrette and excellent turkey meatballs cooked with pale ale and cider. Michaud and Krunkkala have put together a special dish in honor of Anthony Bourdain’s upcoming visit to Portland on October 9. “Eggthony Bourdain” is a trio of deviled eggs topped with thick, pastrami-spiced bacon and a dilly bean. “It’s the perfect drinking snack,” says the chef. Michaud is a big fan of Bourdain (“he’s a traveler like me”) and is giving away pairs of tickets to the show. 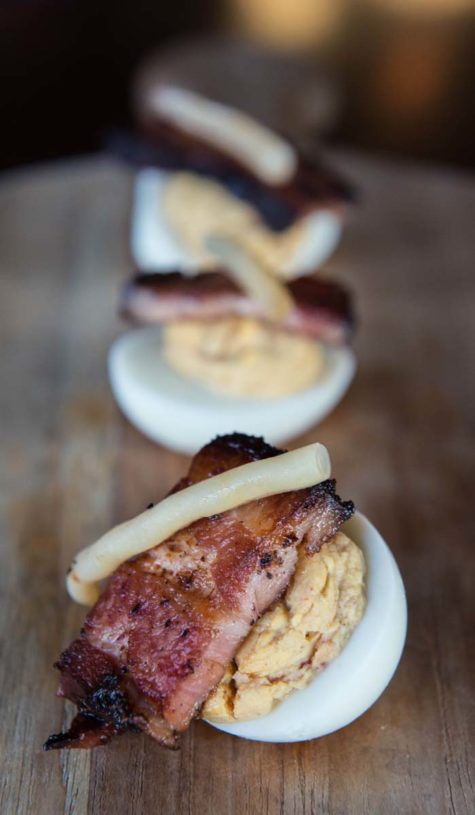 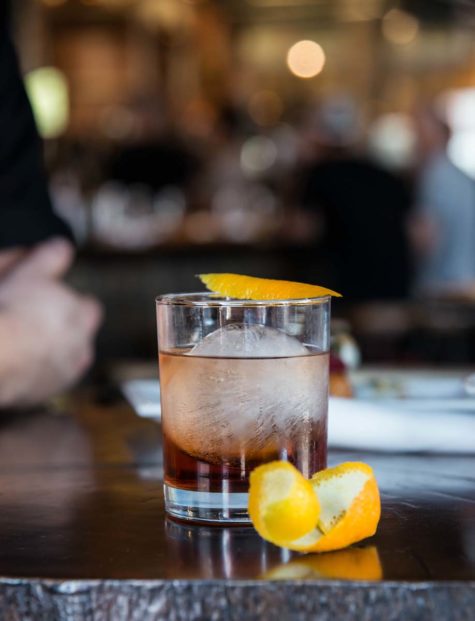 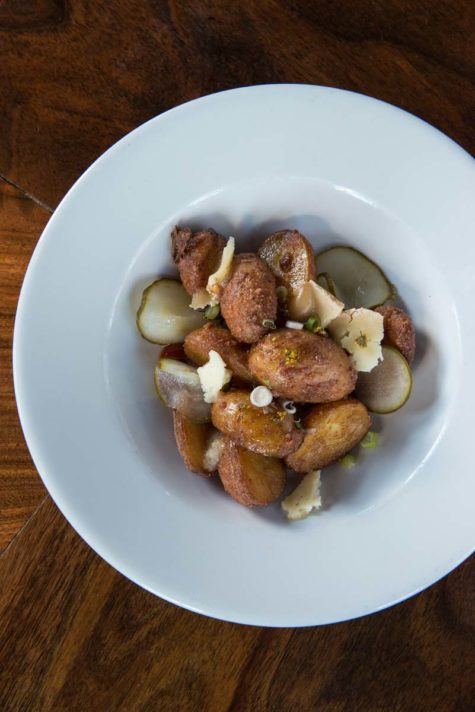 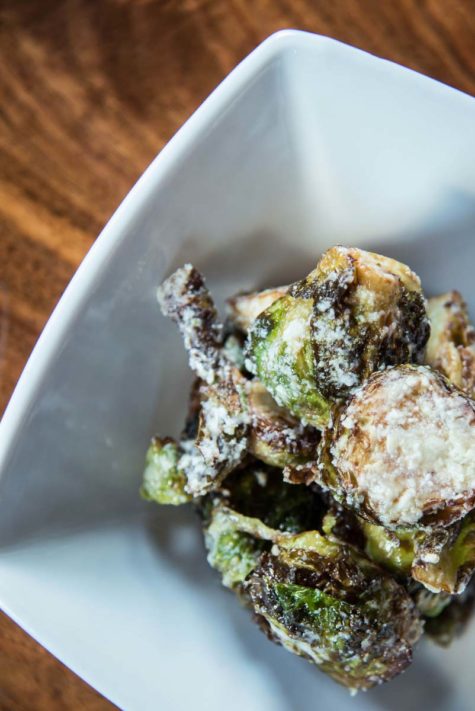