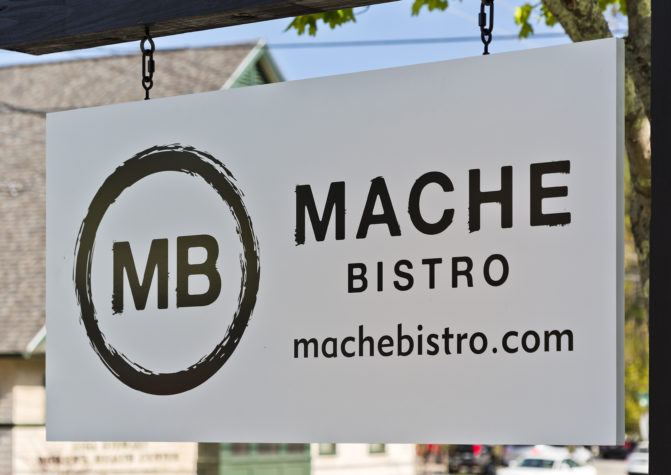 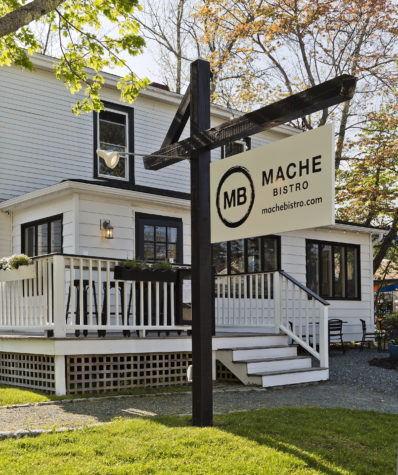 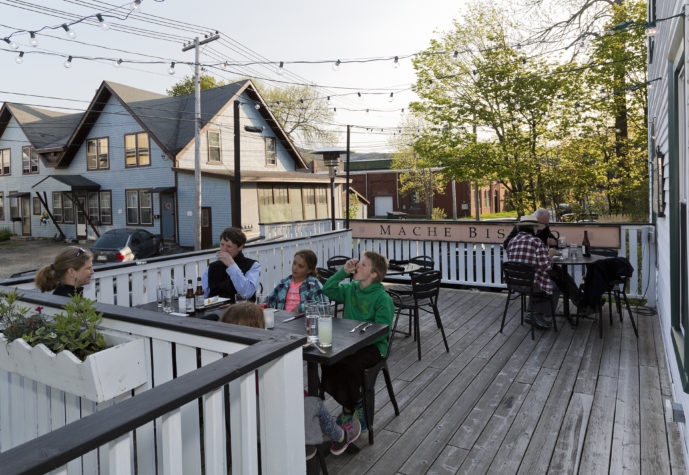 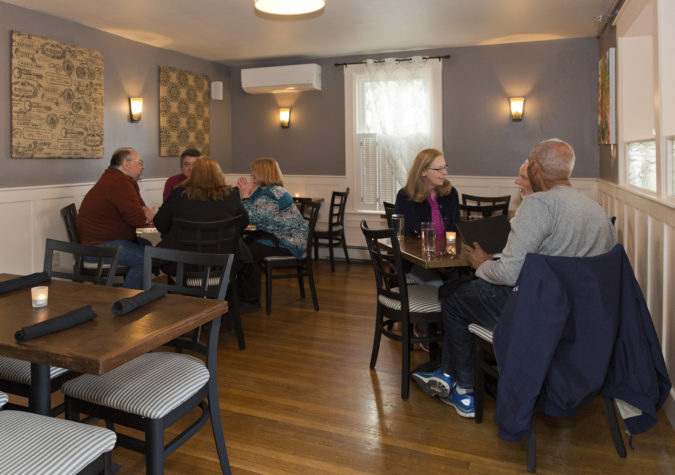 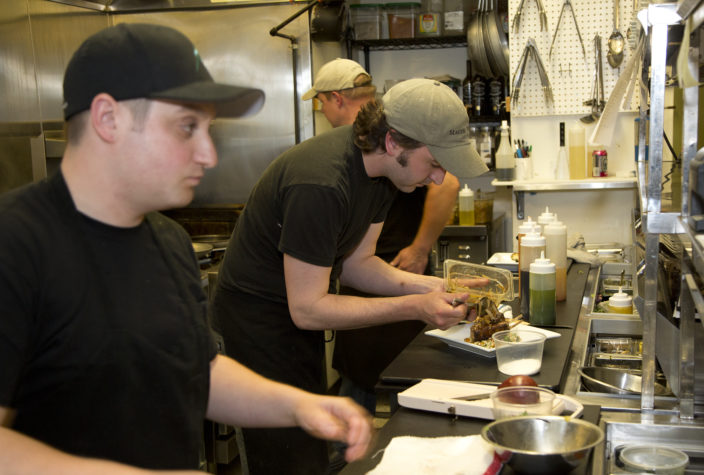 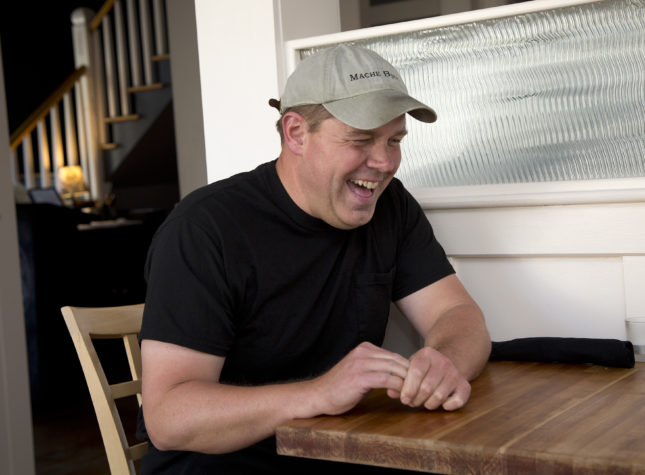 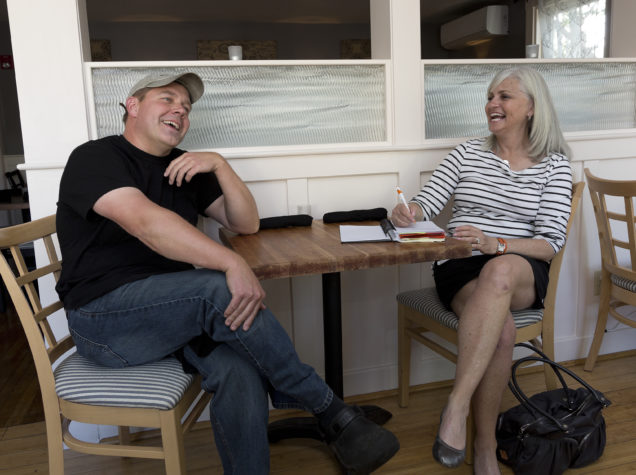 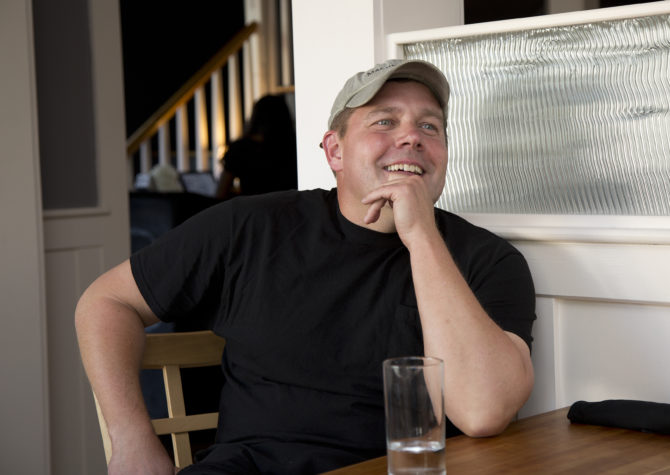 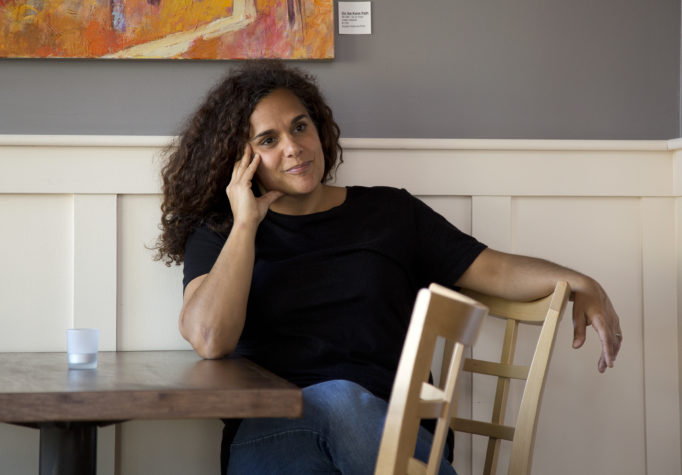 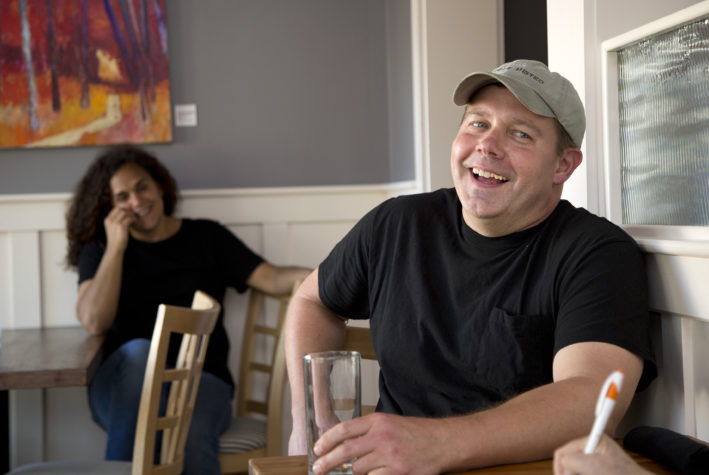 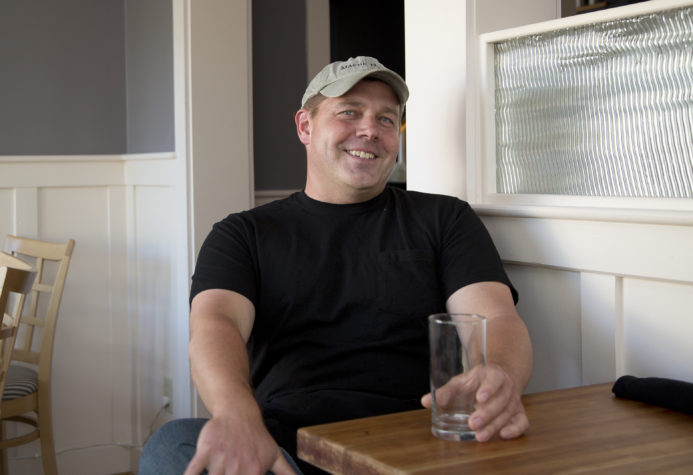 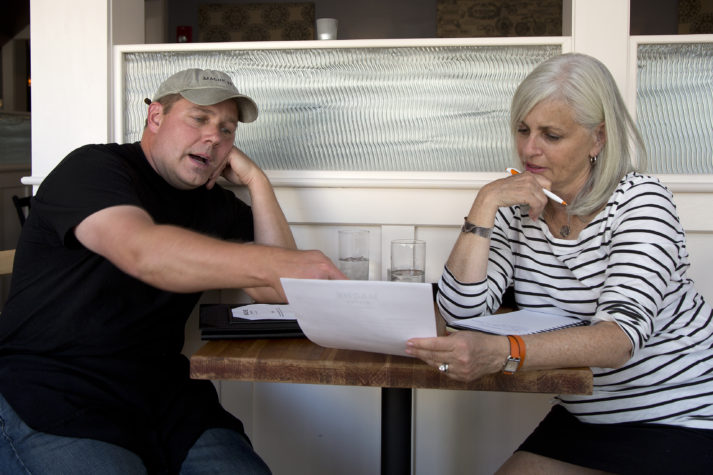 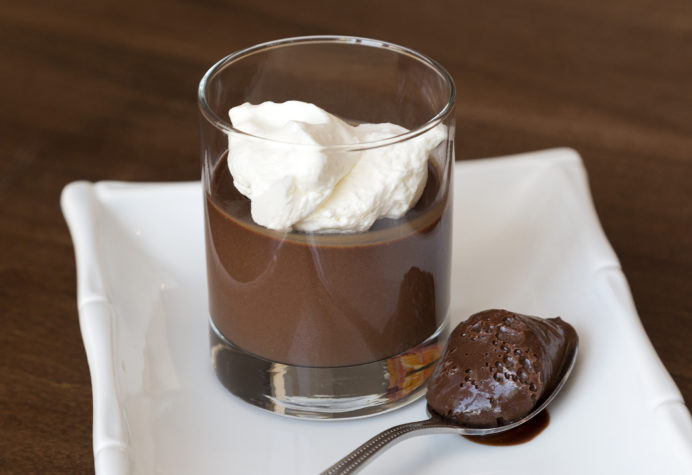 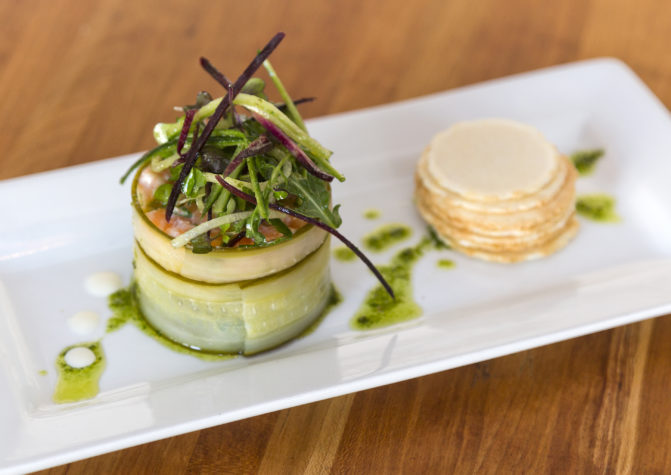 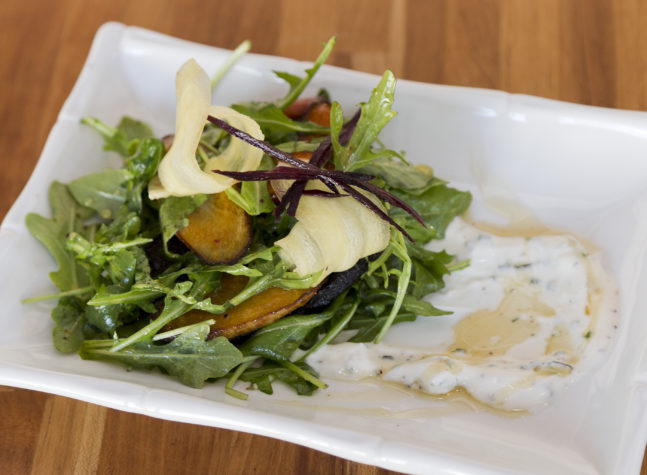 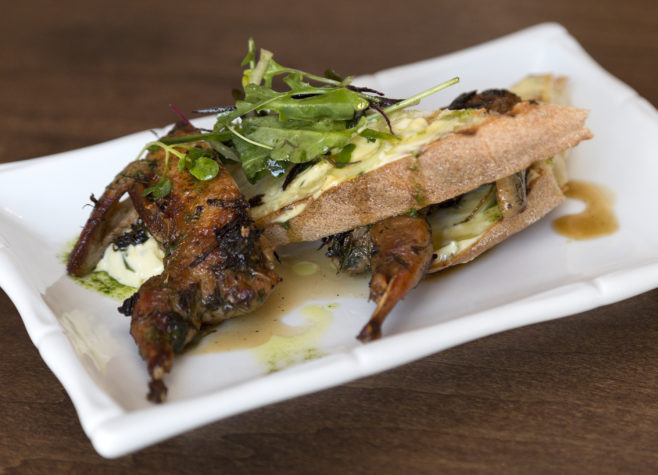 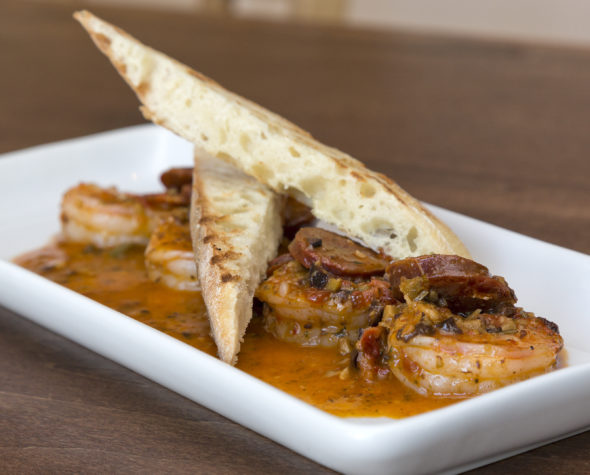 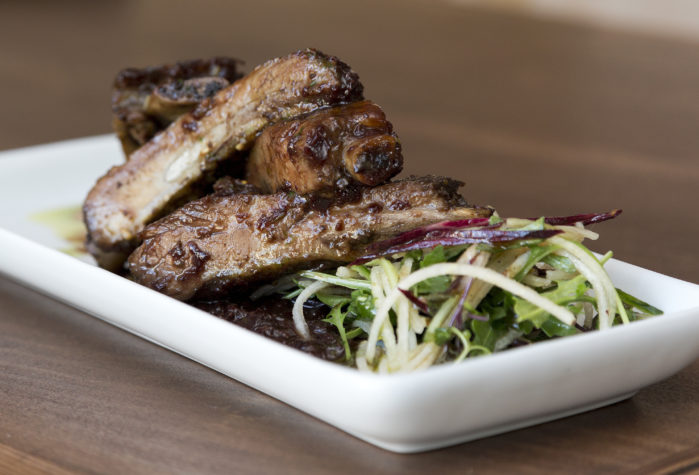 This past winter, Kyle Yarborough was feeling stifled and stuck. The chef and owner of Mache Bistro was tired of cooking the same food every summer. True, the food was excellent, inspired by a varied cooking background that included elements of French, Mediterranean, and American South cuisine. But Yarborough was aching for more creativity. It was his wife, Marie, who finally said to him: “You’re the owner, you can change it.”

“It was an epiphany,” says the chef. “We have only 20 weeks each year that the restaurant is open. I needed to find the sweet spot where everyone was happy, including me, during that time.” It’s a bold move to mess with a winning formula, but the changes Yarborough has brought to the menu are just enough to feed his creative hunger and keep his loyal customers happy.

There are dishes at Mache Bistro that have been on the menu from the first day the Yarboroughs became owners of the place eight years ago. If the French Lobster Roll on grilled flatbread with Brie and caramelized onions were to disappear, there might be an uprising. Diners feel the same way about the duck leg confit, a French classic. You’ll still find both on the menu alongside other favorites, but now the chef has added a whole new category of small plates. “This is how we like to eat,” Yarborough tells me, “exploring different flavors.”

Yarborough has taken a more global approach, playing with flavor and texture, including several components on each plate. The beautifully presented salmon tartare is a lovely example of one of the new small plates. The fish is lightly mixed with crème fraiche and chives and wrapped in a thin slice of pickled cucumber and topped with microgreens. It’s a fresh mix of tastes, balancing fat from the fish and lightness from the vegetables. Other small plates include pan-roasted shrimp and chorizo, inspired by Spanish tapas and a spice-rubbed, grilled quail.

He attended culinary school in Charleston, but found the emphasis on classic French food to be too structured and restrictive. “I get bored easily,” he says, “and culinary school was too much the same thing over and over.” He talks happily about the inspiration he received from a Thai cook he worked with at an upscale restaurant in South Carolina. “This guy taught me about hot, sour, sweet and salty flavors. I don’t use Asian ingredients, but I use the philosophy I learned from him to play with those elements often,” Yarborough explains. You can taste it in the tender, slow-roasted pork ribs, which is also a new menu item. A dry rub containing za’atar, a complex North African spice, is balanced deliciously with a sweet and savory port cherry barbecue sauce. “You never know where you’ll find a moment of inspiration,” says Yarborough. He and chef-de-cuisine Charlie Merritt have been cooking together for years, and will often work out dishes, each adding something to make the whole better. Yarborough credits Merritt with much of their success.

The chef is thoughtful about the ethics of food and is committed to sustainability; he purchases meat and produce with those practices in mind. Yarborough and his family took a brief detour back home to South Carolina before purchasing Mache, but he really missed the connections he had with growers in Maine. “We couldn’t wait to get back. You don’t realize what you have until you leave it,” says Marie.

Three years ago, the Yarboroughs moved Mache Bistro across town, just a short walk from the very center of Bar Harbor. The space is bigger and now includes a 16-seat deck and small front patio, perfect for relaxing with a drink before dinner. Copper-top tables, chic lighting and striped upholstery are set against a neutral backdrop. A tiny bar area is cozy and allows you to keep an eye on what’s coming out of the kitchen. Wine is an important part of the Mache experience, with a concise list that mirrors the global menu.

If you haven’t been to Mache, it’s time for a visit. Even if you dined there last year, you’ll find some exciting changes. Kyle Yarborough is working hard, and successfully, to keep creativity and terrific food on the menu.