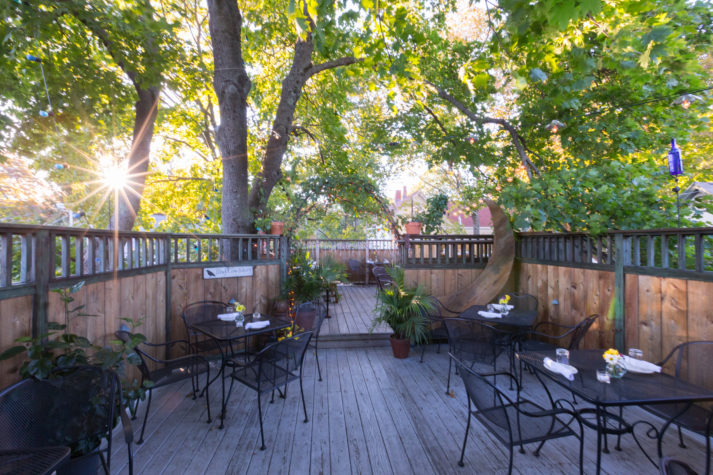 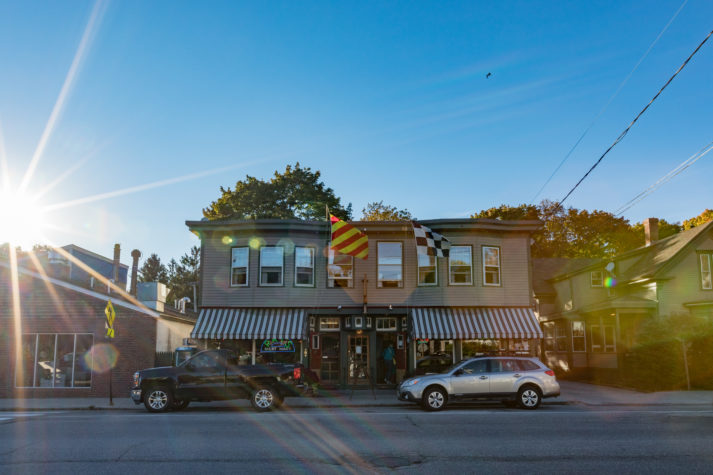 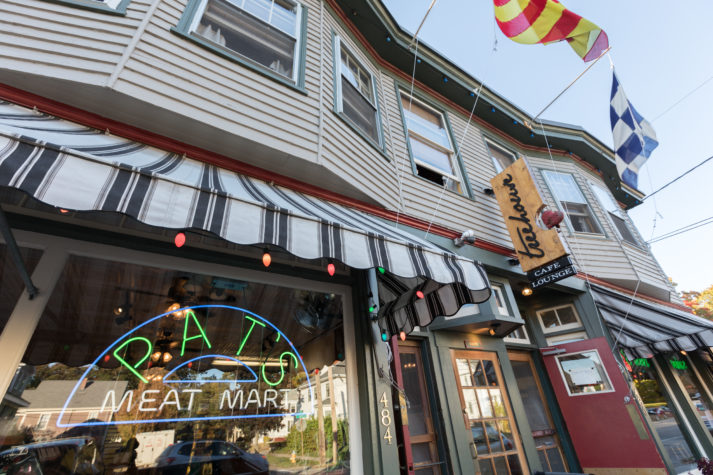 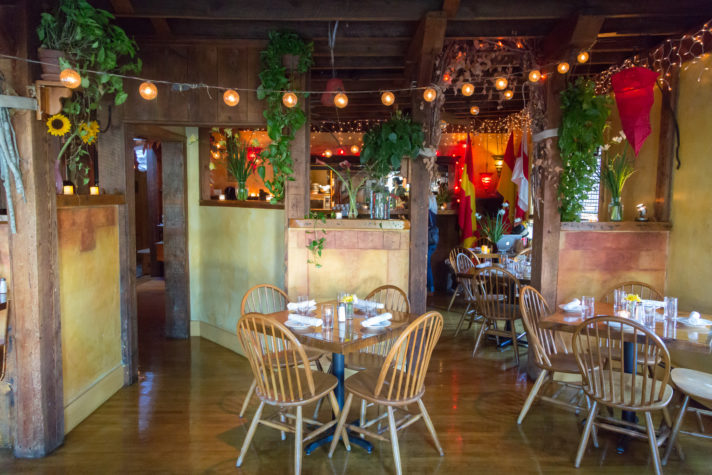 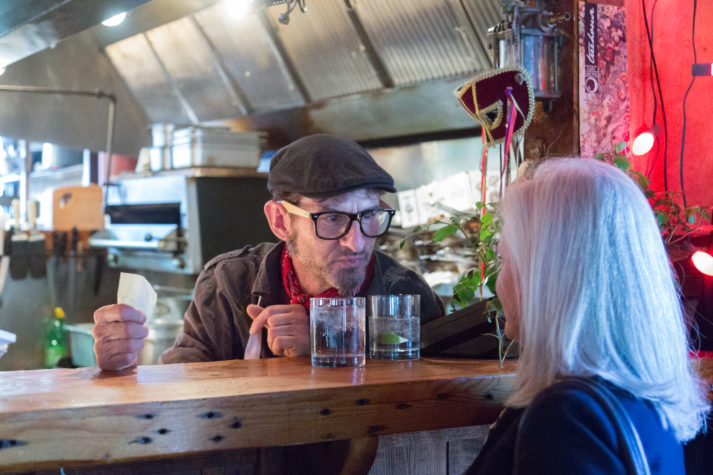 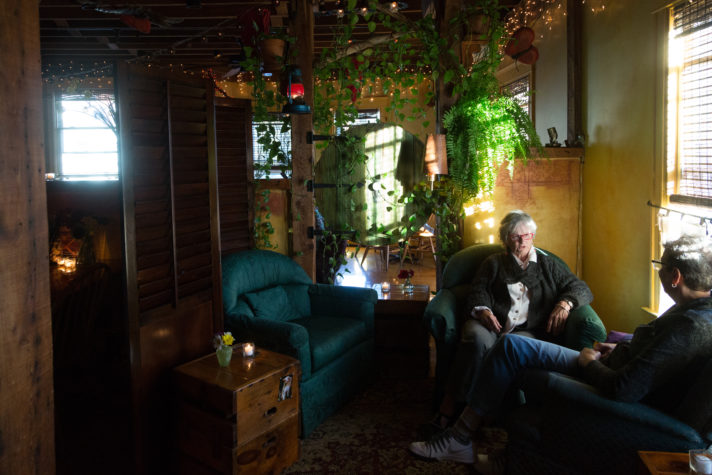 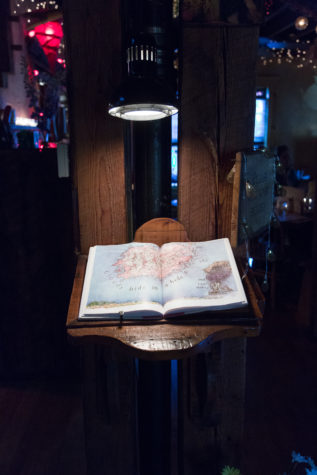 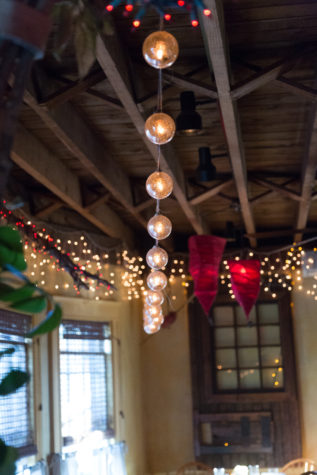 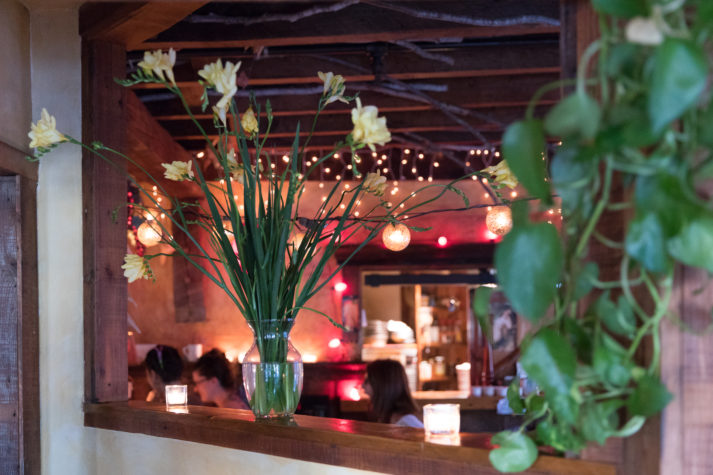 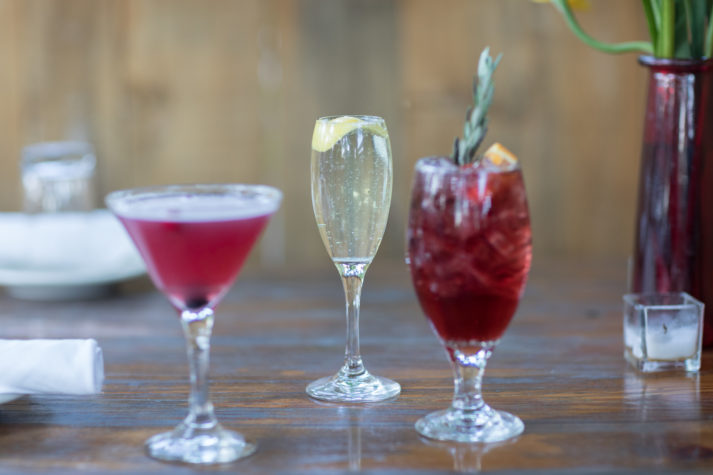 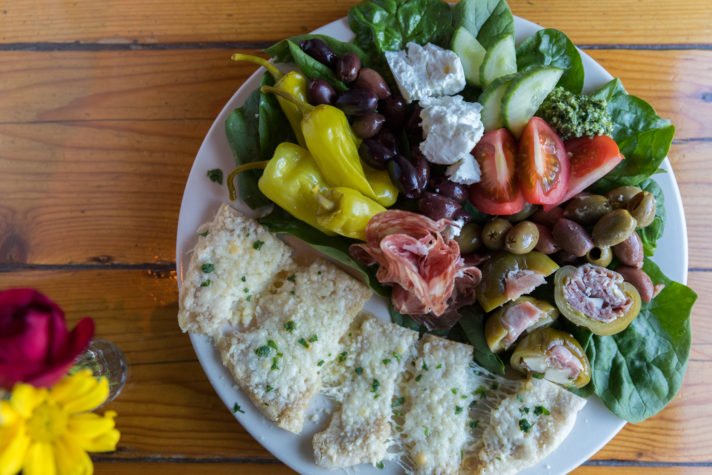 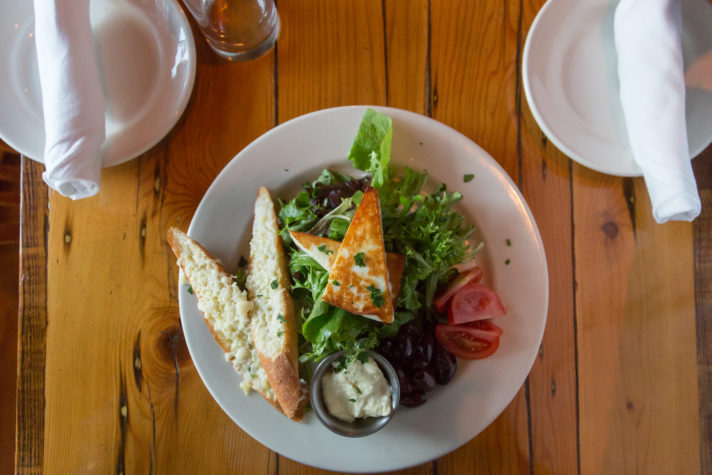 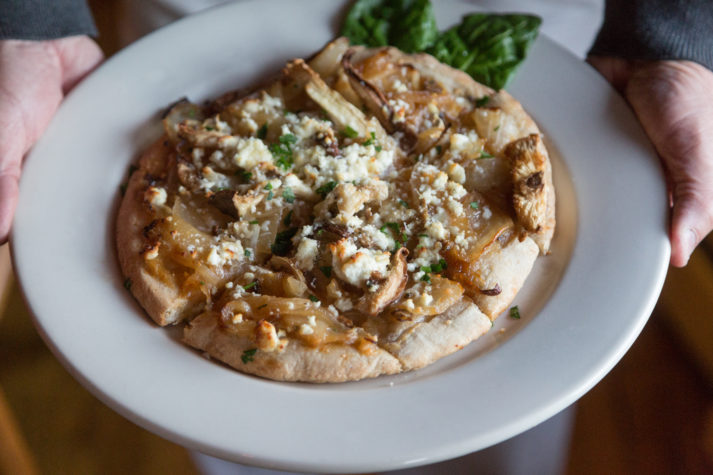 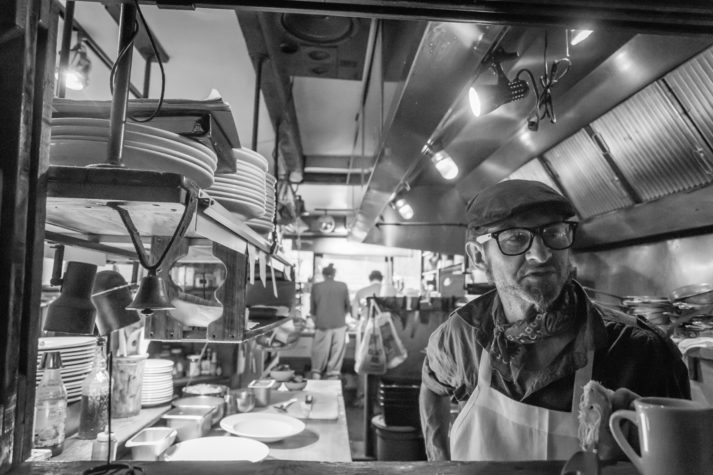 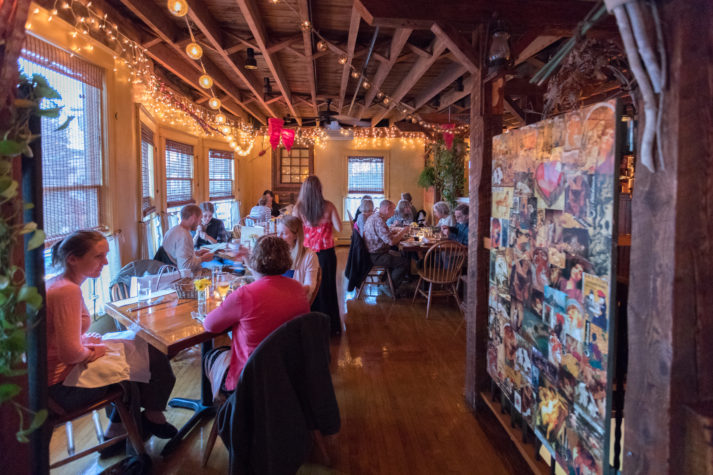 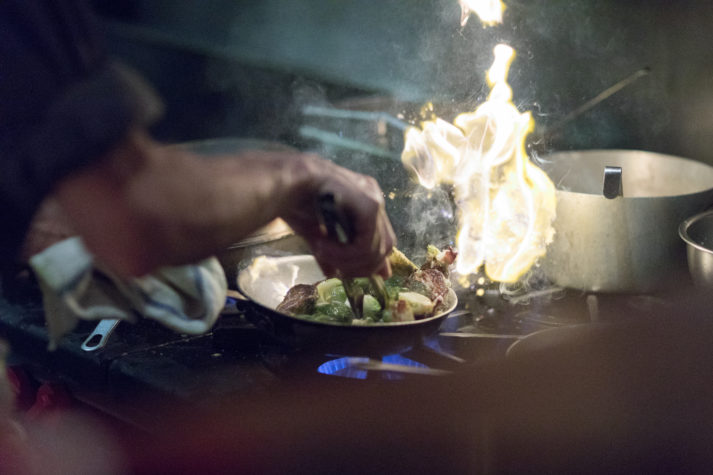 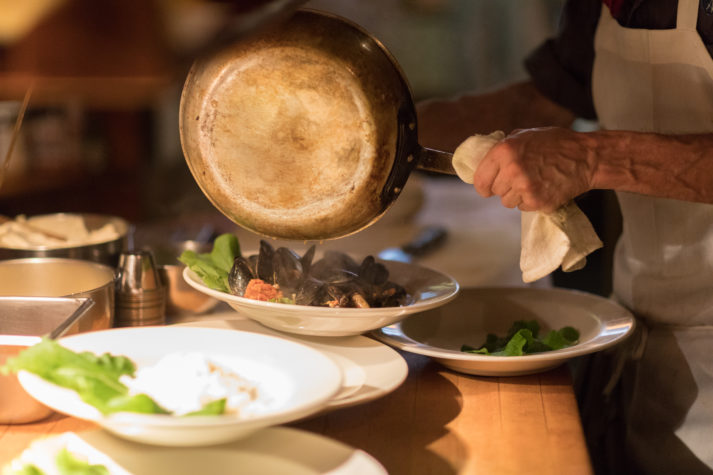 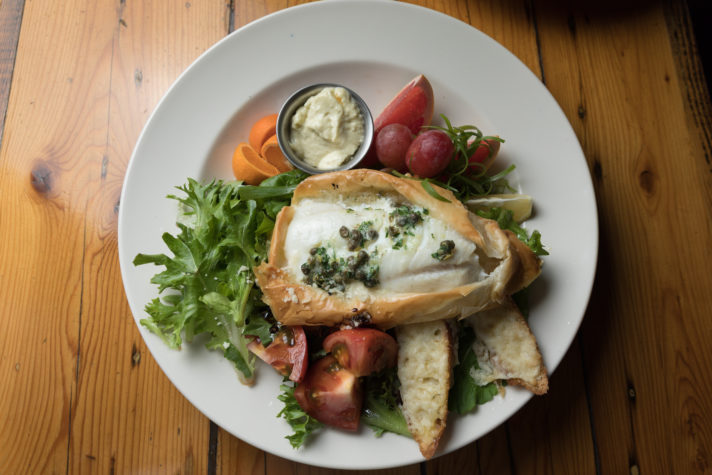 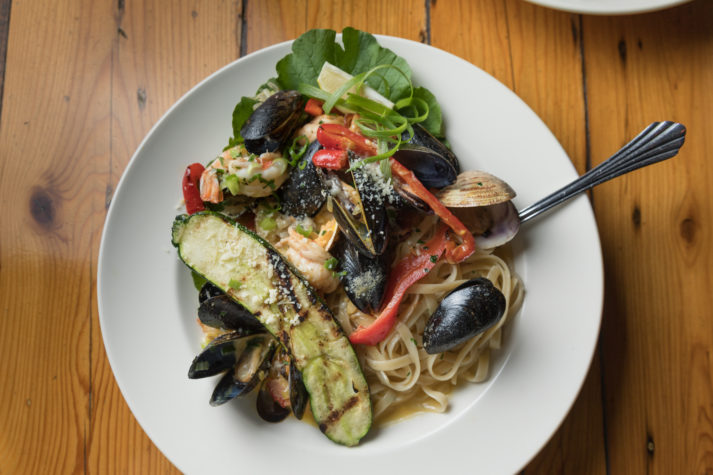 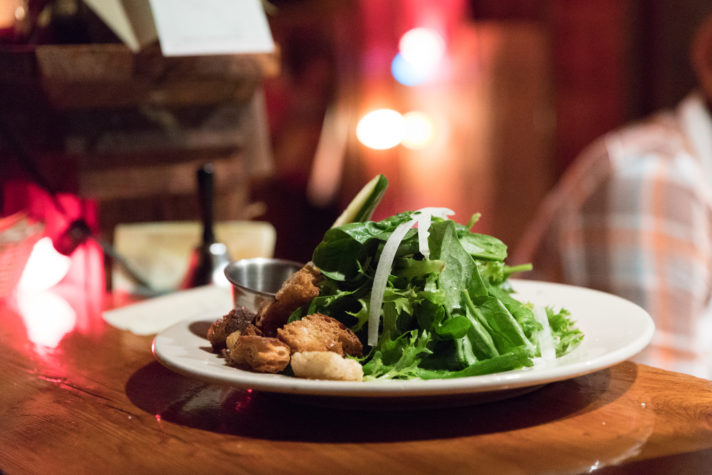 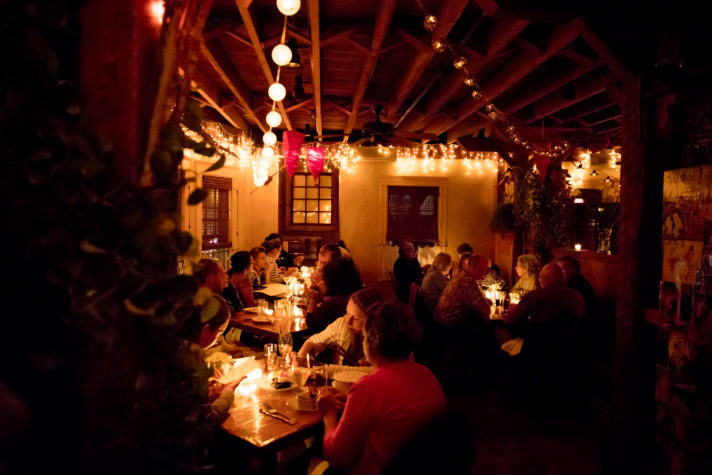 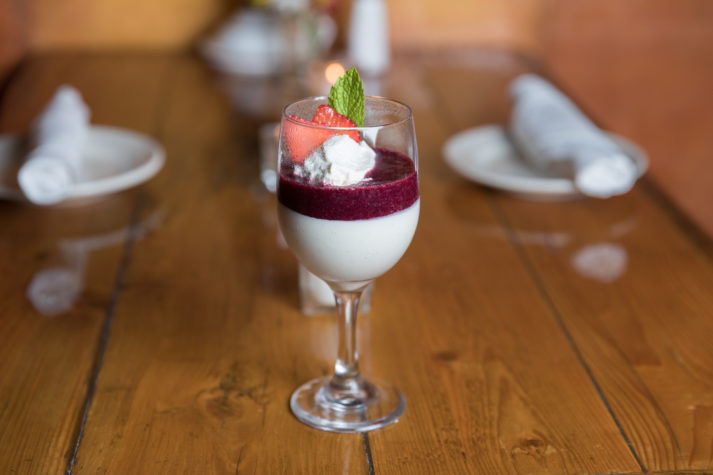 Greg Gilman and I are sitting on the deck of the Treehouse on a recent sunny but cool afternoon. We’re surrounded by greenery—leafy branches overhead and potted plants all around, giving the impression of an actual treehouse. Gilman, eclectically dressed in distressed painter’s pants, flannel vest, and Greek fisherman’s cap, has been a part of the Portland food scene since the 1970s and has a lot to talk about. I am trying to keep up with his stories as he talks animatedly about his experiences. It all started in the late ‘60s after his mother’s death, when he tied on her apron and baked a blueberry pie for his grandfather who lived across the street. There are tales of living on Peaks Island, raising his two sons on his own while working long days at various restaurants, and driving his truck around the area, filling it up with fresh produce, seafood, and bread before heading into work. There was the time that, at age 19, he became the head cook at the Old Port Tavern and served 157 dinners before a Frank Sinatra concert at the Civic Center. “That’s when I knew I could handle anything,” he says.

Gilman is now owner of the Treehouse, recently named Portland’s “Best-Kept Secret” by Buy Local’s Indie Biz Awards. The restaurant’s location on Stevens Avenue sets it apart from the Old Port’s trendy spots, keeping it slightly under the radar. “I want to be the secret everyone knows about,” says Gilman. This is his second time around in the space above Pat’s Meat Market. In 1996, he worked with Jaime Vacchiano, to create the Cafe at Pat’s, taking nearly a year to renovate the space himself. “I’d come in and put the coffee on, bake some muffins, and work on the space until I headed back to Peaks at 6 o’clock to be with my boys,” he tells me. “On the weekends, we’d go to auctions looking for used kitchen equipment.” Gilman built the inviting deck, on which we now sit. He built the sturdy wooden tables here and in the dining room. He decorated the place with his own artwork—frescoes, carved wooden hearts, and painted surfaces. “I wasn’t worried about the food,” he says. The first menu item remained the most popular, fried ravioli crisps. “I made it one night for my kids, from leftovers. They loved it and that dish inspired the rest of the menu,” says Gilman.

In 2004, he was ready to retire. He traveled the country, doing carpentry and cooking, and camping out. He sailed boats up from the Caribbean, and upon returning to Maine, he built himself a cabin in the woods. Then Vacchiano came calling again, and Gilman answered. “I just wanted to be important again,” he says. But it wasn’t until February of 2015 that he finally took ownership of the place he had put so much work and love into.

These days, you’ll find Gilman in the kitchen, turning out the kind of food he loves best. He calls his style “gourmet short order.” “I just make sure the ingredients are awesome,” he says. Most dishes have a Mediterranean style, paying homage to his Greek grandparents. There are a lot of olive oil, lemon, and garlic accenting fresh fish, pasta, and vegetables. Phyllo dough is used to great effect, especially in the baked haddock salad, where the crispy crust is a nice contrast to the mild fish. The creamy lemon-garlic dressing served with this salad and others is great on everything. Every evening, Gilman creates a seafood sauté with pasta. Tonight’s dish features mussels, clams, and shrimp with grilled vegetables in saffron cream sauce, studded with salty prosciutto. It’s a generous helping and deliciously rich. His flatbreads are wonderful, particularly with wild mushrooms, caramelized onions and goat cheese.

At 5 p.m., eager diners are lined up outside, waiting for the doors to open. It only takes a few minutes for the friendly staff to seat people where they like. Some head for that magical deck, where lights are strung among the branches, when it’s still warm enough to enjoy dinner al fresco. Inside, there are nooks with comfortable chairs and loveseats, a corner with a tiny cast iron fireplace, all just right for intimate conversation. Seasonal foliage and curving branches adorn the cozy dining room, adding to the feeling of being up among the trees. Gilman decorates with abandon, showering love on the place. It shows up everywhere, from his menu to the warm and delightful staff that he considers family.

“There are just two things to remember,” he says. ”We have to be as professional as we can, and we have to have as much fun as we can. And we can’t get them in the wrong order.” 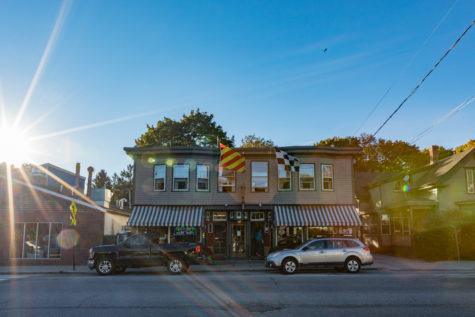 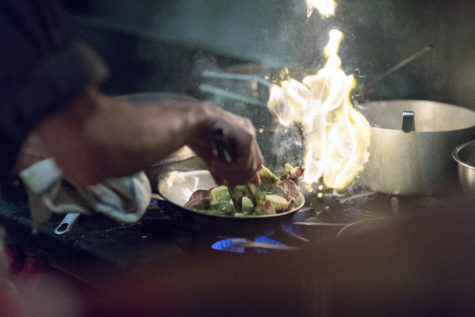 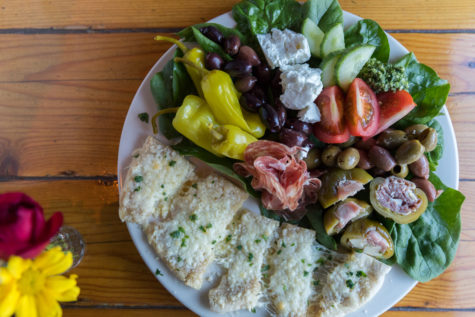 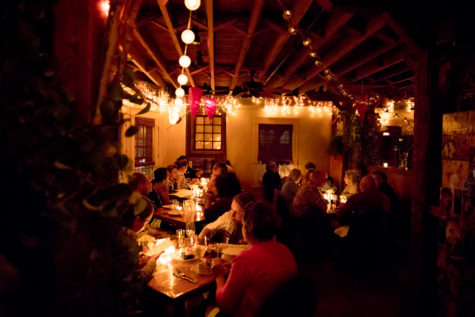