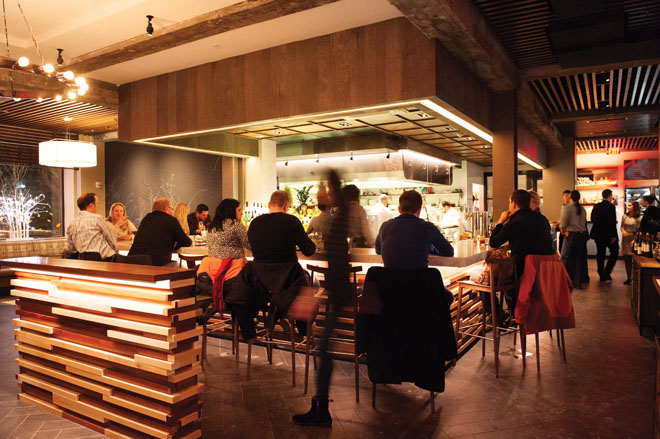 Take a seat at the bar to catch the kitchen’s creative process. 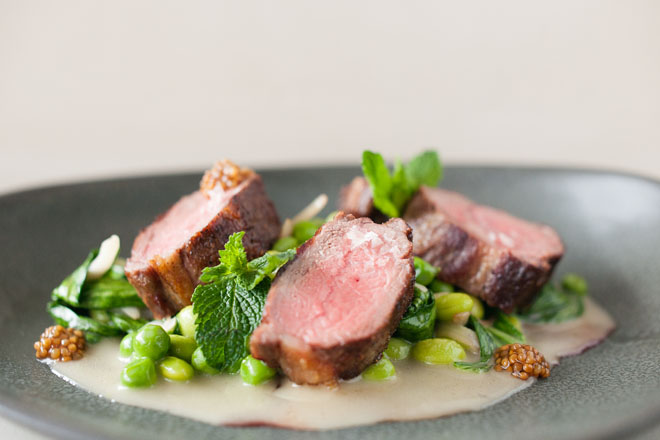 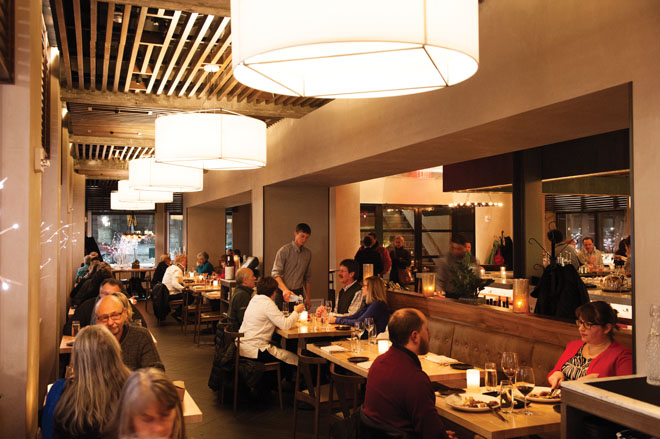 The space has a polished, but casual atmosphere.

Josh Berry is exactly where he’s supposed to be. He’s back in his home state of Maine, he’s a block away from the weekly farmers’ market, and most importantly, he’s in charge of the open kitchen at Union in the Press Hotel. The amiable executive chef likes to greet diners as they step into the restaurant or offer a warm farewell as they leave. He’s a big fan of the open kitchen concept. “I love to talk about food with customers,” he says. “It’s the easiest way to put a smile on someone’s face.”

Berry has an infectious exuberance when he talks about food, recounting the variety of experiences that led him to this place. The chef is proud of the time he spent at the Balsams Resort in New Hampshire, first as a standout culinary student and then as the head instructor and executive chef. He’s worked in Europe and all over the United States, but when the opportunity arose to come home for his dream job, there was no hesitation. Here, owner Jim Brady has given him the creative freedom to “run it like it’s yours,” he says.

He’s brought a culture of excellence and constant improvement to the position. “Is that the best you can do?” is the mantra that runs through the culinary team. “It doesn’t always mean making something more complicated,” Berry says. “Sometimes it means removing something from a dish.” Every day the team adjusts dishes, even just slightly, in an effort to continually elevate their game.

“Our style of cuisine is all about enhancing local products and making them the best adds the right touch of umami. In another dish, tender braised lamb shanks, rich with Moroccan spices, are served on golden lentils with cooling yogurt. Soothing sweet potato soup is presented in a small earthenware crock and lightly flavored with the unexpected addition of coconut and peanut.

The menu may take trips to far-flung cuisines, but local favorites are always in season. At lunchtime, there’s the Upper Exchange lobster roll, a slightly more sophisticated take on the ubiquitous Maine item. The Union version includes two small portions of fresh lobster meat served on toasted and buttered ciabatta rolls. It needs little beyond a squeeze of lemon. “Lobster should be dressed the way it was born,” says Berry. The big ground steak burger is piled high with crispy cider-cured bacon and Cabot cheddar, and offered on a toasted English muffin. Union’s lunch salads are full of fresh, seasonal vegetables with the flair of special ingredients like crumbled citrus, pickled cranberries, and wild rice.

Dave Robinson is the baker and pastry chef who turns out a variety of excellent breads and desserts every day. Rather than promoting a signature item, Berry challenges Robinson with “what’s the best bread we can make today?” Warm, thick slices of anadama, oatmeal, and brown bread loaves are served with Casco Bay butter. Desserts are important at Union, following the same theme as the rest of the menu, incorporating favorite, familiar ingredients with the unexpected. Indian pudding, one of New England’s most traditional desserts, gets updated with complex dried fruit chutney, toasted brown bread, and crunchy orange meringues. A rich chocolate tart is enhanced with fragrant chai spices and served with almond milk gelato. Each dessert has several components so that the diner can mix them however she likes. “We want you to experience different flavors in every bite,” says the chef.

For the adventurous, or indecisive, diner, Berry’s three- or five-course dinner tasting menu is an exciting journey through forest, farm, and sea. He creates new dishes every day that are completely different from the regular menu. Often, dishes vary from table to table as well. “This gives the team an avenue for exploration,” Berry says. “It’s our chance to do research and development on a new dish and play around with ingredients.” He says it’s hugely popular, both with the chefs and guests. “It keeps the chefs pushing forward, and our guests love the element of surprise.”

Special wine pairings can add another dimension to the tasting menu. Justin Jaret, previously of Primo, is the Press Hotel’s food and beverage director. His mission is to make sure the beverage program keeps up with the creativity of the food program. “We adjust the cocktail menu with the seasons just like the restaurant,” he says. All the bartenders have a hand in creating drinks and are proud to show off their work. Sarah Graff offers a Paloma del Sol, a tequila-based cocktail bursting with fresh grapefruit and lime juice, punctuated with spicy jalapeno puree. The rim is dipped in a mixture of smoked sea salt and sugar, an irresistible mix that complements the drink perfectly. The effect is refreshing, bright, and surprising.

Jaret is in the process of overhauling the wine list, looking to make it more diverse in both character and price. Wines that prove popular by the glass are added to the list and offered by the bottle. Staff education is a big part of Jaret’s job. “When servers understand the wine, they want to help diners,” he says. When wine is ordered by the glass, the server brings the bottle to the table, sparking conversation with the guest.

This type of personal service is what really makes Union shine. “I think we have some of the most professional staff in the city,” Berry says. Professional, yes, but also personable. The chef and restaurant staff work hard to make each guest feel welcome and happy. Berry tells me a story about accommodating a child’s dinner request. “He wanted scrambled eggs and a brownie for dinner. No problem,” he says. “I’m banking on people coming to Union as an experience, not just fuel for their bodies.”

Union has a friendly ambiance, but it doesn’t lack sophistication. Big windows onto the street give the space a somewhat urban feel. A sunny lounge area to one side is furnished with sleek, upholstered sofas and chairs, nice for enjoying an afternoon cup of tea and a sweet treat. The expansive marble bar is inviting and an excellent spot for watching the action in the kitchen or meeting a friend after work. Midday, there are small groups gathered for business lunches and tables for two catching up over Union’s bountiful salads. In the evening, the lighting is softened and a quiet hum of conversation takes over the space.

As Union’s one-year anniversary approaches, chef Berry reflects. “We got some feedback that the menu was a little too safe at the beginning,” he says. “Now we’re not afraid to push the creativity and expand the flavors. We’re not the new kid in town any more, so we have to stay fresh.” He tells his staff, “Let’s just serve great food. Done.” 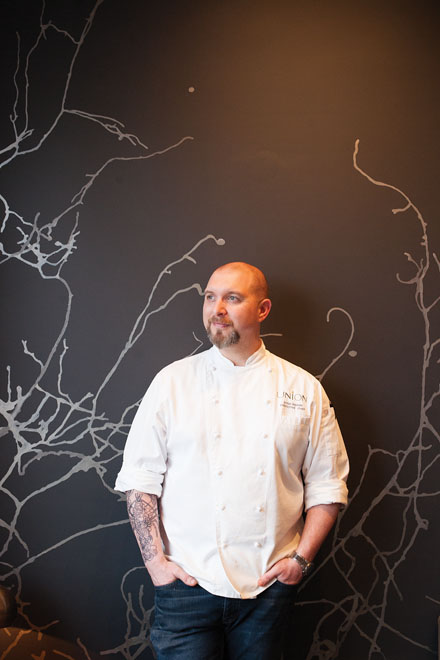 Executive chef Josh Berry is thrilled to be back home in Maine. 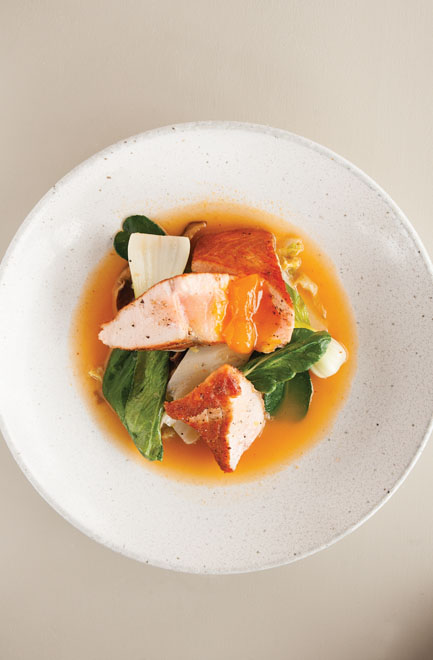 The ingredients shine in an Asian-influenced salmon dish. 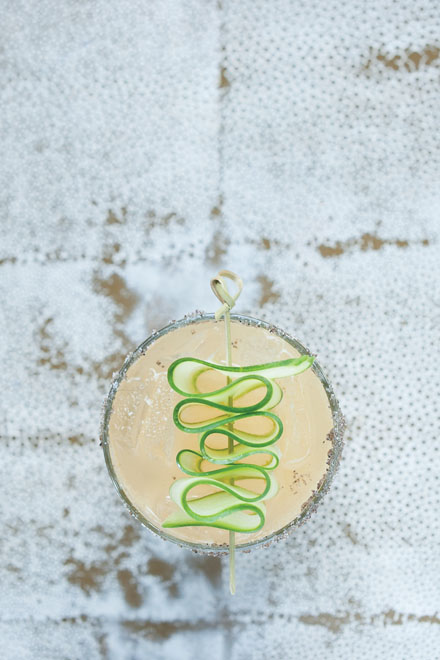 Imaginative cocktails change with the season, just like the menu. 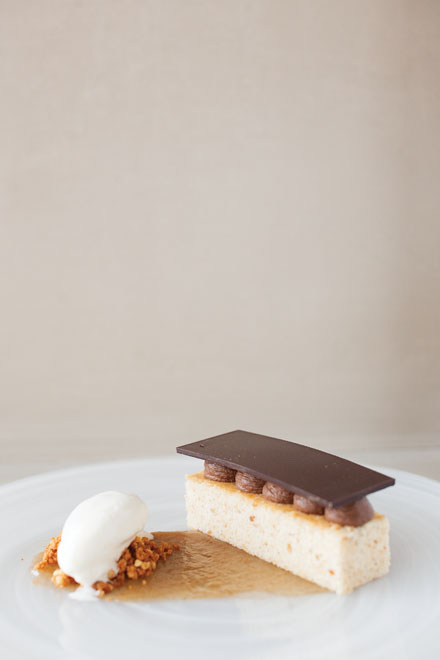 Artful desserts are a necessary indulgence.