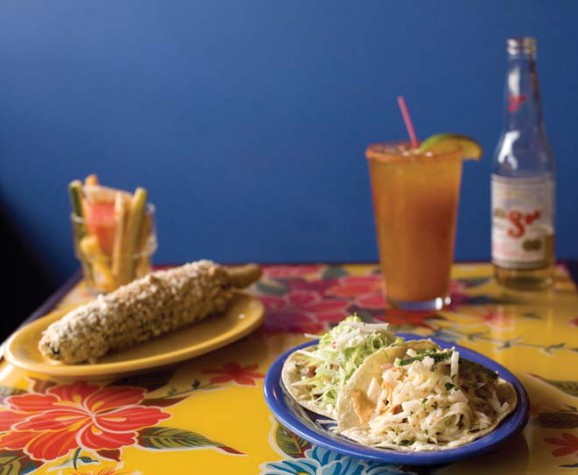 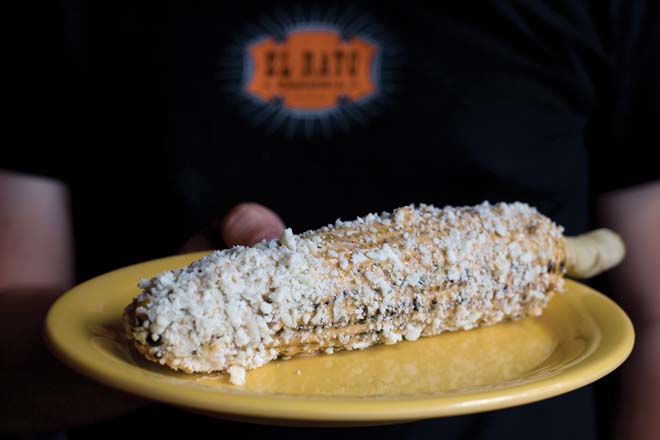 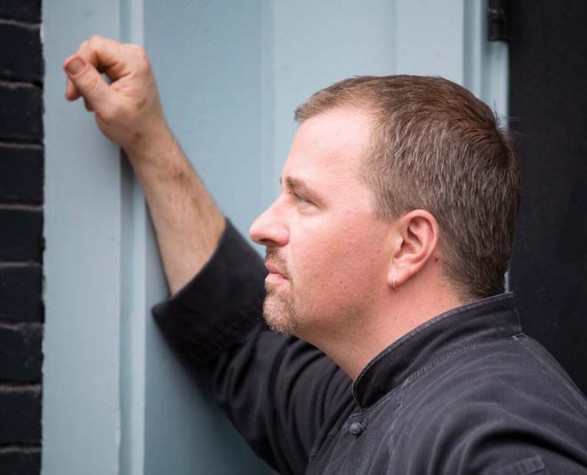 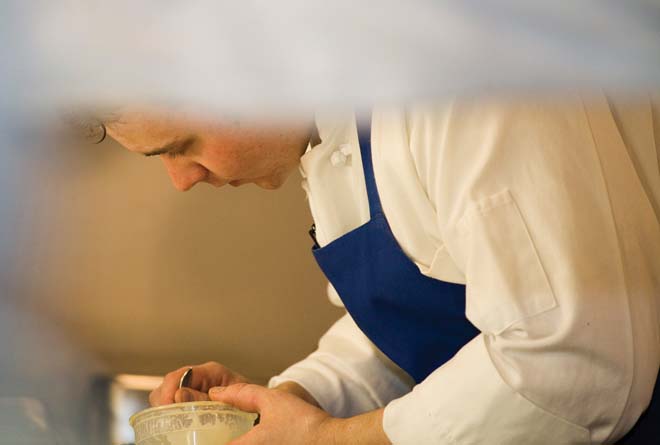 Chef Jacob Jasinski in the kitchen 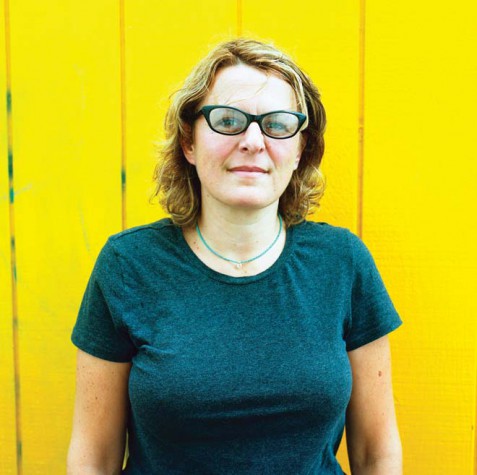 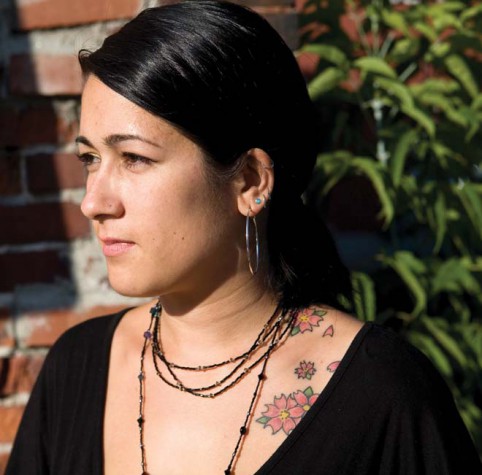 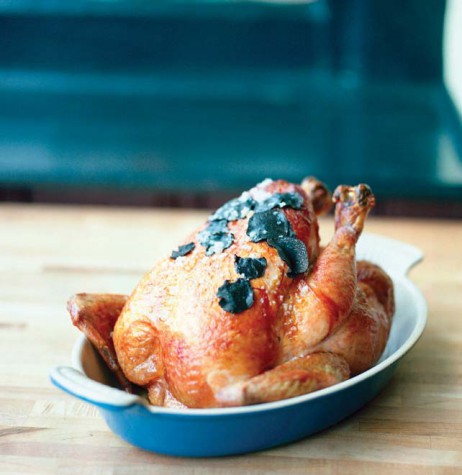 EAT FEATURE-September 2009
By Peter A. Smith
Photographs by Jonathan Levitt

In May, the big, neon S in the Eastland Park Hotel’s rooftop sign went out, so that on the approach from South Portland, up and over the Casco Bay Bridge, the city’s skyline looked as if it were topped with a sign saying “EATLAND.”

Despite an already competitive restaurant market and a general souring of the economy, at least six new restaurants opened across the city this summer.

“I’ve never seen such a wave of new restaurants,” says Sam Hayward, chef at Fore Street. “In my experience, this is unique. It’s an amazing representation of new food energy in Maine. It keeps people on their toes. It’s also kind of like adding wolves to caribou habitat.”

More restaurants make for a more competitive marketplace, which should be good for those who like to eat out. And the foodie options don’t stop with dinner. Down on Middle Street, Rabelais Books carries food titles ranging from a first edition of the seminal La Physiologie du Goût to Eliot Coleman’s The Winter Harvest Handbook.

The Public Market House is bigger and better, a cupcake kiosk graces Tommy’s Park, and new lunch and late-night places are springing up all over town. This spring, Chef Rob Evans won the 2009 James Beard Award, Best Chef Northeast, at Hugo’s restaurant, which brought newcomers to both of his restaurants, Duckfat and Hugo’s, and to others across town.

“We’re all experiencing a little lift,” says Erik Desjarlais, the chef at Evangeline.

Days after El Rayo opened, cars crammed the parking lot and a line of customers trailed out the door. Although the wait was 45 minutes, nobody turned around to leave. Everyone seemed desperate for street-style Mexican food—tortillas, carnitas, and fish tacos. Not to mention mojitos, margaritas, and the snakebite, a fiery cocktail of tequila, Cointreau, cilantro, and jalapeño.

Chef Cheryl Lewis and her life and business partner, Norine Kotts, opened the bright Coke-bottle-lined taqueria in what was once a run-down Citgo gas station/head shop selling glass pipes, cheap beer, Mountain Dew, and Salvia, the mystical herb of Mexico. El Rayo’s drugs are a bit more wholesome—tequila flights, pork taquitos, and grilled corn on the cob slathered with chipotle mayonnaise and cotija cheese, an item that regular customers liken to edible crack.

“They just come again and again for the corn,” says Kotts. “It’s that addictive.”

Before El Rayo opened in June, the couple ran Café Always, Aurora Provisions, and Portland Lobster Company, where they met business partners Alex Fisher and Tod Dana, the duo who approached them about starting another restaurant—or two.

In the kitchen, Lewis stands and jokes with her employees. Outside, Kotts scans a sea of families and couples sitting at the bright yellow, outdoor picnic tables. Next to the building is their next project: a silver Airstream trailer that’s about to become a bar.

On the First Friday in June, a chilly fog settled on Commercial Street. At the Salt Exchange, a lively group of twenty-somethings in skinny jeans and older couples in their weekend best, gathered around a curved cherry-wood bar for the restaurant’s opening night. Artists and art walkers perused photographer Jeremy Hartford’s recent work from Greece—photos of a donkey, a squid hanging in a window, a woman walking along a set of railroad tracks—all the while sipping drinks and noshing on escabeche mussels, asparagus soup, and Meyer lemon tarts.

Owners Charlie and Martha Bryon, both in their thirties, came to Portland shortly after Charlie lost his long-time job waiting tables at Metro Restaurant in Portsmouth. It was the same day that Martha went into labor with their first child. Martha said, “We’re going to do our own thing from now on.”

“At the Salt Exchange we try to provide really outstanding, healthy food in a beautiful space with great service,” says Charlie.

Chefs Erik and Krista Desjarlais share a passion for simple, traditional, European cuisine. The two are married, but most nights they cook separately in their respective restaurants, Evangeline and Bresca.

Starting in October, the chefs will take the seats and tables out of Bresca,reset the dining room, and, for 12 diners paying $120 each, prepare a 12-course themed dinner.

The couple will focus on classic, Old World cuisine that they love but don’t always have a place for on their regular menus. The two plan to feature ingredients like caviar, milk-fed chicken, truffles, head cheese, whole legs of lamb, and fruit pies.

The food will be paired with more formal table service. “We want it to be distinctive and old-fashioned but not stuffy,” says Krista. “We’re doing this on our own time. It will be the food that we really want to cook. The bottom line does not have to be the number one.”

“It will be an exploration,” says Erik.

The Corner Room Kitchen and Bar

The former union hall at the corner of Exchange and Middle streets has large glass windows, high ceilings, and an open kitchen. Each butcher-block table is topped with a candle. At the head of the bar, John Myers, the mustached mixologist who heads up the Casco Bay Institute for Applied Intoxicology, pours classic cocktails: Negronis, Sidecars, and Sazeracs. On opening night, not a single empty table remained, and the reach for Myers’s drinks was at least two-deep.

Building off the commercial successes of The Front Room and The Grill Room, chef Harding Lee Smith opened this, his third restaurant, in June. Harding says he was inspired by his time in Italy, which has translated into fresh pasta, brick-oven pizzas, and local fish. Smith has 300 chickens on a 2.5-acre farm that he shares with his brother- and sister-in-law in Windham. “You can buy the best organic eggs in the supermarket, but if they’re not fresh, you won’t have that bright orange yolk,” he says. “The eggs add a rich flavor and color to pasta.”

“We’re Italian inspired,” he says. “We have local ingredients, and we’re treating them very simply.”

Chef Lee Farrington grew up in Kentucky. Her mother is from Brazil, and she spent summers in South America. She trained at the French Culinary Institute in Manhattan and worked New York City’s restaurant circuit—Al Di Lá trattoria (Italian in Park Slope), Raga (Pakistani in Cobble Hill), Balthazar Restaurant (French bistro in SoHo), and Tabla (New Indian in the Flatiron).

“And while I was there, I came to visit Portland,” she says. “It reminded of the San Francisco coastline. And, of course, it was much more affordable here.”

That affordability meant that, as a chef, she could afford to buy her own building inside a former beauty salon, hire builder Ryan Wallace to renovate the space with old barn boards, and plant a restaurant at the foot of Munjoy Hill with cheap, good wine at the bar and lantern-lit dining in the small garden out the back door.

“It will be a neighborhood place with a funky, eclectic menu,” Farrington says. “We’ll have Peking duck and coconut cake side by side. I want it to be fun.”

Behind the giant wooden door of a mid-nineteenth-century Gothic Revival church on Chestnut Street is an entranceway of such church-basement simplicity that it belies the extravagance beyond the threshold: 50-foot peaked ceiling, a circular bar, balcony lounges with cable railings, and a big, open kitchen. Black-jacketed cooks move under a hood-vent system that resembles an organ, only it pumps steam instead of Methodist hymns.

“I’m expecting the food will meet the grandeur of the space,” says Dean Bingham, the project’s architect and the chocolatier-in-chief at Dean’s Sweets.

Over the last two years, Anne and Peter Verrill, owners of the Foreside Tavern in Falmouth, transformed the historic church into a 175-seat restaurant and events space. The custom-made wooden bar, lit with a triquetra-shaped lightbox, takes up much of the former nave. Up in the balcony, a choir of men in khakis and women in black dresses look over a crowd that tends to mingle until midnight. The two bars serve twenty wines by the glass, draft beers, and specialty cocktails like the Holier Than Thou, a concoction made with St. Germain, grapefruit, and sparkling wine.

While no wafers made it on the menu, chef Eric Simeon, who recently cooked at AQ Kafé and Aquavit in New York, slow-cooks meats sous vide style and soft-boils eggs in a pressure cooker to make a truffled deviled-egg appetizer. Late into the night, the bar dishes out lobster tacos with cilantro, cabbage, and red onion, and cheeseburger sliders on brioche.

“In terms of style, I pull from a lot of different resources: Scandinavian, Mediterranean, Mexican,” Simeon says. “The food is approachable and straightforward, so it seems very simple. But the intricacy of the preparation might be unexpected.”