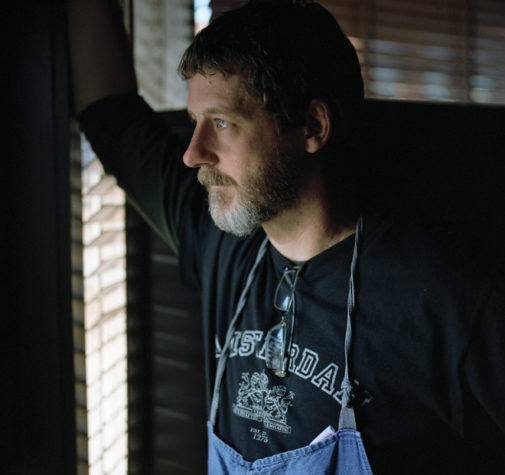 Chef Rob Evans went from being a virtual unknown in the food world to being the recipient of a coveted James Beard award. 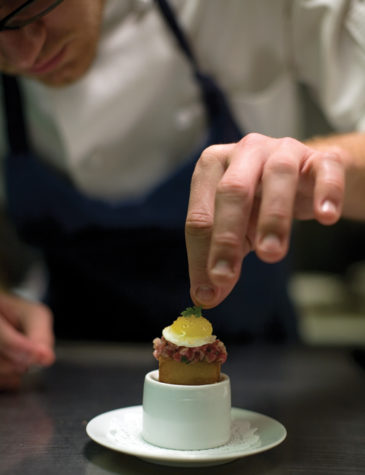 Hugo’s, up on the hill, a short stroll away from the salty harbor, is warm and quiet, lit by low light, lit by candles.

The kitchen smells like brown butter and baking biscuits. The cooks get by with basic equipment: not much more than what you would have in a home kitchen. The kitchen is as quiet as naptime. No music or chatter, just footsteps, the clank of pot or pan, water running. Every few minutes, the chef calls out an order.

Chef Rob Evans wears a white T-shirt, Carhartt work pants, leather motorcycle boots, and a blue apron. His knives are lined up on the cutting board, their tips balanced and elevated on a rolled up dishtowel. Beside the knives—tiny funnels, tweezers, surgical tongs.

At Hugo’s, the food is slow and precise. Each cook hunches over whatever he is plating, arranging the elements—the fried Maine Halloumi cheese, the citrus-poached vegetables, the dehydrated olives—as if tickling a baby on a changing table.

Before dinner service Evans disappears into the office to put on his chef’s coat. The line cooks dance around the stoves stirring pots of goat ragu and flipping bok choy in pans. Evans stands in his corner silently peeling grapes.

The Education of Rob Evans

He grew up in Southborough, Massachusetts. The men in his family were electricians. Evans went to vocational high school but never even considered working in the trade.

When he was 20, he sold his motorcycle, bought a one-way ticket to Hawaii, and found a cheap apartment right on Sunset Beach and a job cooking breakfast at a surf shop across the street. “That was probably the sweetest situation of my life,” he says. “I was out of work by noon, surfing and playing on the beach all day long. It was so good that it got boring, and I took a job in a cruise ship kitchen.”

On the ship, Evans worked three-month-long shifts with a month off between to travel. He did it for three years. As the ship sailed around the South Pacific, he worked through every station in the kitchen.

In the fall of 1998, Evans tried out for a line cook job at The Inn at Little Washington, the famously over-the-top restaurant and inn in Washington, Virginia. He got the job and went back to working 14 hours a day for eight dollars an hour.

A year later, Evans and his then-girlfriend, now wife, Nancy Pugh, moved on to The French Laundry in Yountville, California. At that time it was considered the very best restaurant in the country.

“Everything was different at The Laundry,” he says. “Everything was cleaner and better, and done its own way.” For his tryout, Evans spent the day in the kitchen doing prep work. During service, he stood in a corner of the kitchen and watched how it all went down. “Watching that food go out sent chills down my spine,” he says.

Evans and Pugh left Napa after six months to open their own place. For a couple months, they lived out of their pick-up. “Our stuff was all over the place,” says Evans. “We had no apartment, no money in the bank, nothing. And that’s when we heard about Hugo’s. The owner was willing to sell cheap.”

In the seven years that they’ve been open, Evans and Pugh have gone from total unknowns to totally famous in the food world.
In 2004, Evans was named one of the best new chefs by Food & Wine magazine. In 2009, he won the coveted James Beard Foundation award for best chef in the Northeast.

An Evening with Rob Evans— Hannaford Supermarket, Back Bay
Rob wanders around the produce section.

“We make a Hannaford run at least once a week,” he says.

“There is not a heck of a lot of fruit grown in the great state of Maine. We come here for pears, pineapples, peaches—most of the fruit.

And there is the exotic cart, too. I buy avocados here, pomegranates, kumquats, and key limes. I stay extremely local, but I like a flourish here and there, like passion fruit vinaigrette with Maine lobster.

It’s so nice to stand here and pick through everything, to say, this size would be perfect for this dish or that dish. It’s kind of like a farmers’ market.

I wander around. I get ideas. It’s like, ‘Oh, here’s some Macadamia nuts.’ I lived in Hawaii for a few years, maybe I’ll get some of those. There is nothing new here, but there are reminders.”

“And there is the offal section. I got a request for a chef’s menu—all innards—and it’s all here. Gizzards and hearts, ox tails, bone marrow, pigs’ feet, beef kidneys.

We walk down the canned food aisle.

“After work, it’s 1 a.m., we’re at home, nobody feels like cooking, Nancy makes grilled cheese and warms up a can of Campbell’s tomato soup.

Or Red Baron pizza from the freezer section. We get it nice and crispy in the oven, eat it with good olive oil, Maldon sea salt, and red pepper flakes—that and a couple cans of Guinness and I’m set for the night. People find this funny, they’re like, ‘You’re a chef and you eat frozen pizza?’ As if it’s strange that I don’t sit around all night eating brunoised foie gras.”

The Bar at Hugo’s

Evans takes his chef jacket off, sits in the corner of the bar, and orders a couple of dishes.

“Sometimes they know I’m here, sometimes I spy. I’m seeing the place from the customers’ point of view.

Evans puts on his reading glasses and looks at the menu.

“The charcuterie is made in-house, but nobody orders it. We thought about calling it a cold-cut platter.”

Because Evans uses some space-age thickeners and techno techniques in a few of his dishes he is considered by some to be an adherent of molecular gastronomy—the avant-garde cooking style popularized in Spain. It’s really not something that he likes to be associated with.

“Ideally, the marriage of old and new adds up to something playful and fun, but also delicious and nourishing, not gimmicky or weird for the sake of being weird. Like, fun on the beef short ribs is a tiny pile of potatoes with a pool of gravy on them like you did when you were a kid at Thanksgiving.

Hugo’s has been an experimental restaurant since day one. Now we’re trying to bow down to convention without selling out.

In the early years, this was a special-occasion restaurant. But Portland is a whole different place than it was ten years ago. For the first five years, we ate out at every five-star place we could get to. The opulence around fine food seemed unnecessary. A restaurant like this doesn’t have to be saved for a birthday or for an anniversary.”

The bartender sets down the pork belly dish.

“The pork is braised overnight, braised for 12 hours at 190 degrees. The dish is classic flavors elevated with good technique. It’s all technique. The rutabaga is poached in pork fat.”

The bartender sets down the sweetbreads.

“The sweetbreads taste like General Tso’s chicken. Sweetbreads are the most user-friendly offal. People are used to it. It’s not nearly as esoteric as it used to be. And that sweet-and-sour glaze—it’s crispy and spicy salty and irresistible.

I’m not afraid to mess around with Asian flavors, but I don’t want to overdo it and get into the whole fusion thing.”

Evans sits at the sushi bar. The sushi chefs are plating swordfish belly from Harbor Fish Market. Evans wants some.

“We do a lot of belly at Hugo’s. Salmon belly, toro, cod belly.

Look at what these guys are working with, pork belly, lobster, sea urchin roe—we’re using so many of the same ingredients.”

Evans digs into an order of conch sashimi from Japan.

“It’s crisp and rubbery and I love it. Not everything has to be tender.

Look at Shinji [the sushi chef] with the tiny sardines—scaling them, gutting them, not destroying them.”

A man with posh English accent from across the bar begins talking to Evans.

“Excuse me. Are you the chef at Hugo’s? I’m Martin. I’m here from London. Don at Rabelais recommended this place, and the Regency recommended Hugo’s. I was there last night. One of the best meals of my life, thank you.”

Evans thanks him back.

“I’m interested in using ingredients that can express themselves here.

I admit that it gets boring right around March but we stick to it. It’s what home cooks in Maine have been doing forever.”

Luxurious restraint is the sign of a good chef.