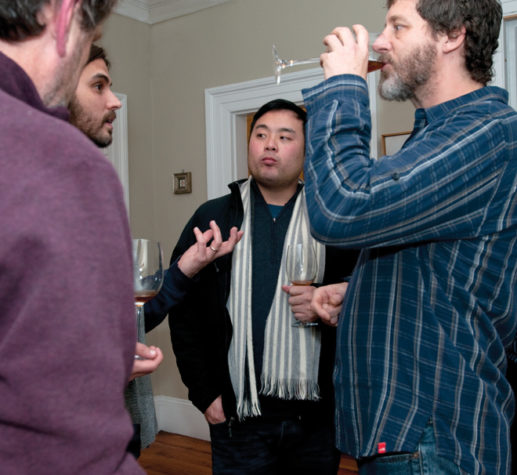 John Naylor from Rosemont Bakery and Market, Andrew Knoulton from Bon Appetit, David Chang from Momofuku, and Rob Evans from Hugos share some drinks and conversation.

From left: John Naylor of Rosemont Market & Bakery, Andrew Knowlton of Bon Appetit magazine, David Chang of Momofuku and Rob Evans of Hugo's at the dinner in honor of David Chang. 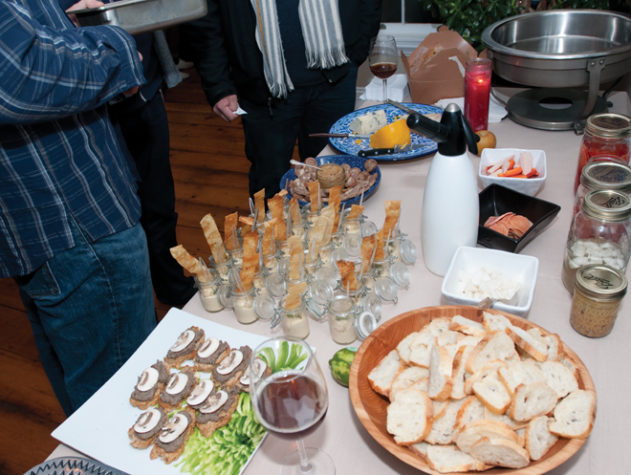 A spread of appetizers, including chicken liver on soda bread (foreground) by Stephen Benenson and Merry Fogg, monkfish liver pate with mustard and potato chips (in jars) by Hugo's Rob Evans, pickled vegetables (right) by Samantha Hoyt Lindgren and Peter Smith, and a selection of local cheeses provided by Rosemont Market and Bakery, at the dinner in honor of David Chang. 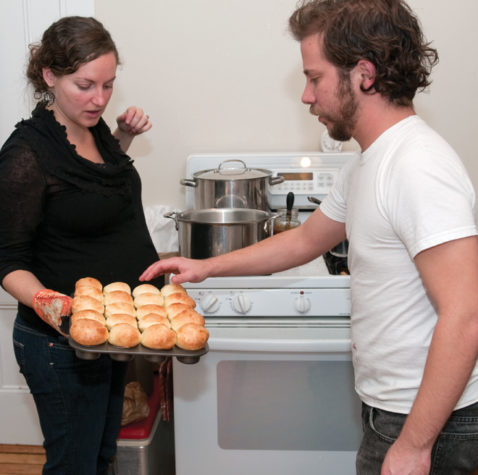 The hosts, Merry Fogg and Stephen Benenson, test some fresh-out-of-the-oven popovers at a dinner in honor of David Chang. 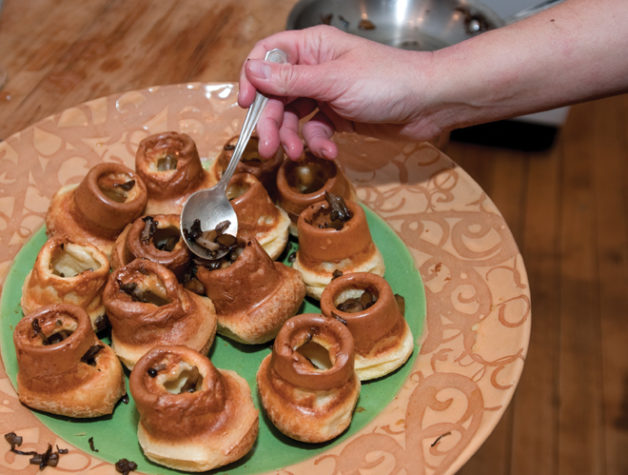 Sauteed shimeji, hen of the woods, and oyster mushrooms with saffrom cream sauce in popovers.

Filling popovers with sauteed shimeji, hen of the woods, and oyster mushrooms (which were then topped with a saffron cream sauce), at the dinner held in honor of David Chang. 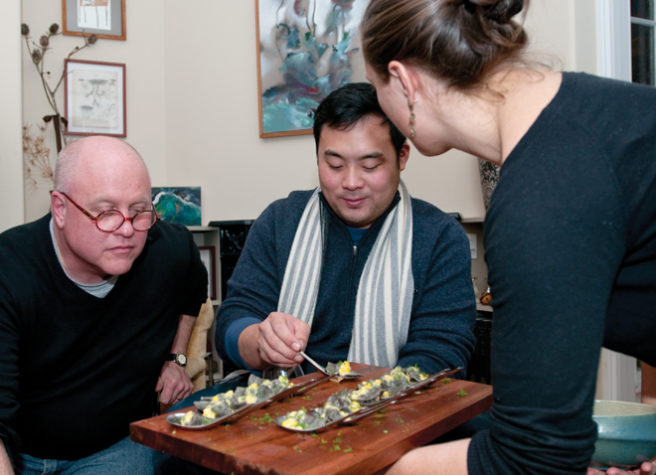 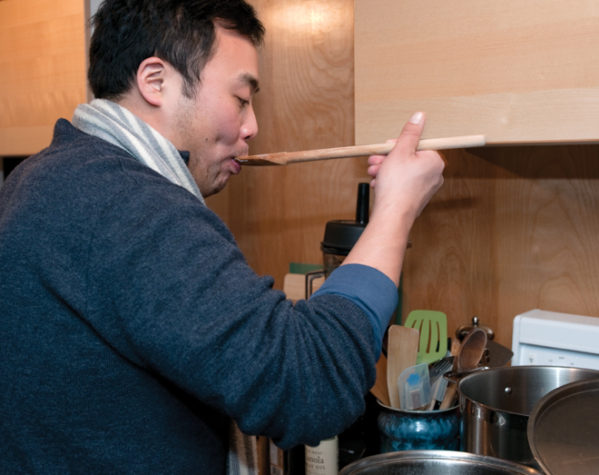 David Chang of Momofuku samples some Frogmore Stew simmering on the stove, one of the many offerings at the dinner held in his honor in Portland. 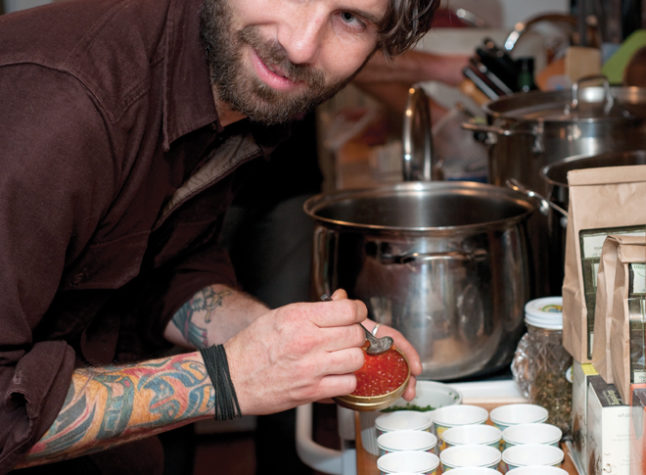 Josh Potocki from One Fifty Ate plates up some salmon roe.

Josh Potocki of 158 Pickett Street Cafe makes bubble tea with salmon roe at the dinner in honor of David Chang. 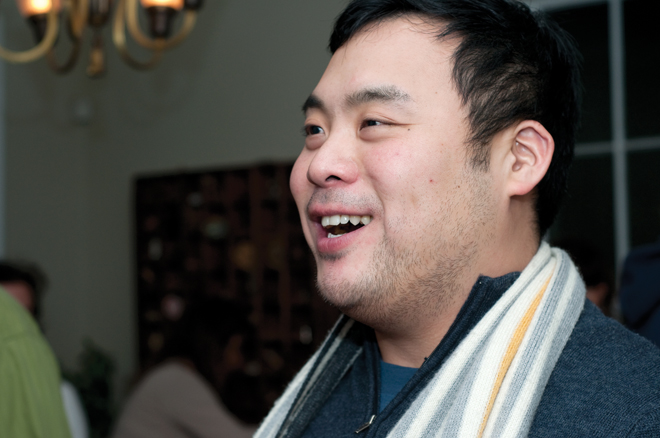 David Chang of Momofuku at the dinner held in his honor in Portland.

You would think that the Pope was coming to town.

As early as October, I began hearing rumblings about David Chang coming to Portland, something about a book signing and the possibility of a dinner party. This developed into the rumor that he was coming with Andrew Knowlton, from Bon Appetit magazine, the guy who said that, out of all the places you could eat, Portland was “America’s Foodiest Small Town.” Never mind Portland. The whole state was going crazy.

David Chang. He’s everywhere. The former U.S. junior golf champion from Virginia whose parents were from Korea made a name for himself in New York with a few restaurants—Momofuku, Ko, Ssam, and Ma Peche—serving Korean-infused pork buns, bahn mi, and kimchi packed with Maine oysters. His book, Momofuku, is a bestseller, a perfect recipe for potty-mouthed, late-night, umami-laden excess. In other words, my kind of party. Now, of all places, Chang was coming to Portland.

Chang seemed uncomfortable at first, as would be expected with a house full of people he didn’t know fawning over him and his book, but he soon loosened up after being plied with glass after glass of wine. At one point, Chang said he’d been drunk for two months. The whole world was going crazy for his book and his food, and he was dealing with it with good food and even better wine.

I caught him in the kitchen, casually tasting from the different pots on the stove containing dishes in progress. When he tasted my pho broth, I asked him if there was anything he would do differently. He said, “I don’t know, I don’t think I would ever deal with making pho at home.” After cooking it for 35 people—19 hours on the broth alone and then countless garnishes—I understood why.

At first, I had been confused by the guest list, but once the party thinned out, it all started to make sense. We were here for the best of Maine. We were here to eat and drink. When Knowlton poured Chang into his rental car, it drove the point home: we had shown God a good time on earth.

I’m embarrassed by how Sandra Lee–simple this dish is.

You need crab claws from the Jonah crab. Then you need a few shelf-stable pantry items—Kewpie mayonnaise and two condiments made from yuzu, a crazily aromatic Asian cousin of the lemon that can be picked up at any Japanese grocery or ordered online. And the yuzu mayonnaise is just the tip of the iceberg. When Fran Derby—formerly of wd~50 and Tailor here in New York City—joined the kitchen at Ssam, he swapped out the yuzu stuff for harissa, a spicy Moroccan condiment you can buy in a tube, and it worked perfectly, even if the flavor of the whole dish was totally different. The moral of this story: crab + flavored mayonnaise = lots of possibilities.

And that’s it. A seafood snack that you can have anytime. Embarrassingly simple.

1. Combine the mayonnaise, yuzu kosho, and yuzu juice in a dipping bowl and mix well. Serve alongside the crab claws.