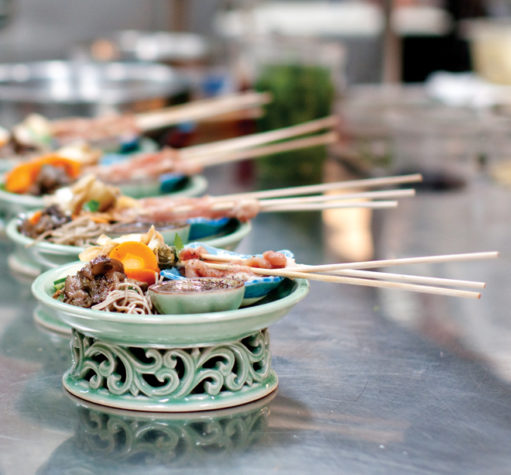 As part of the Asian meal, celadon dinnerware presents noodles, house-made kimchi, and chicken for the hibachi on pedestal plates, presented family style. 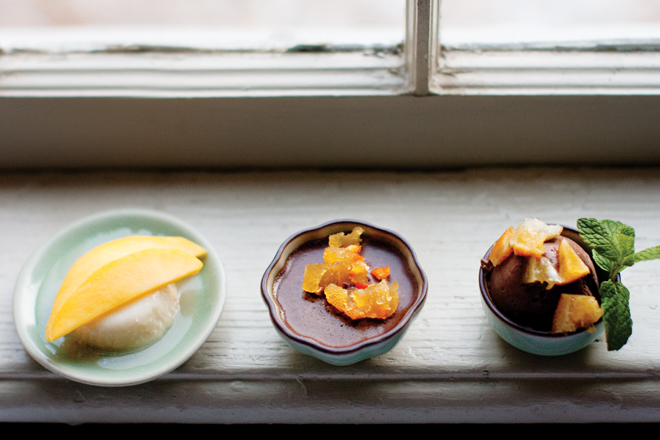 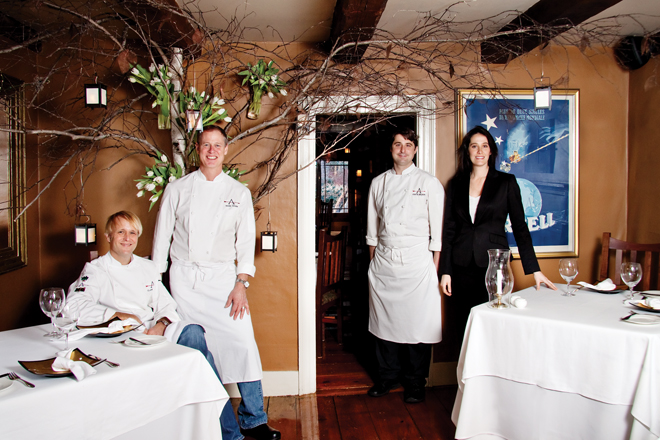 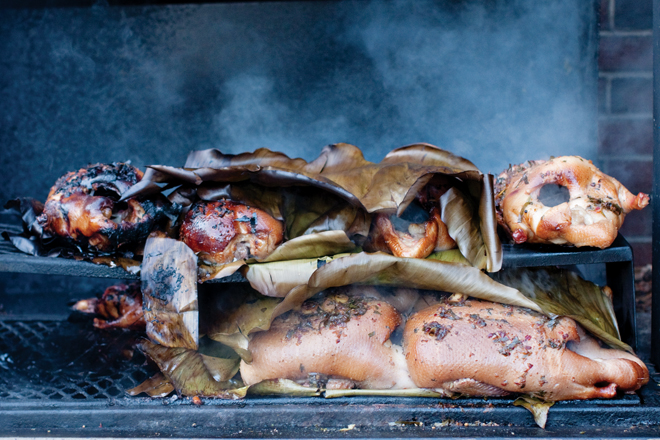 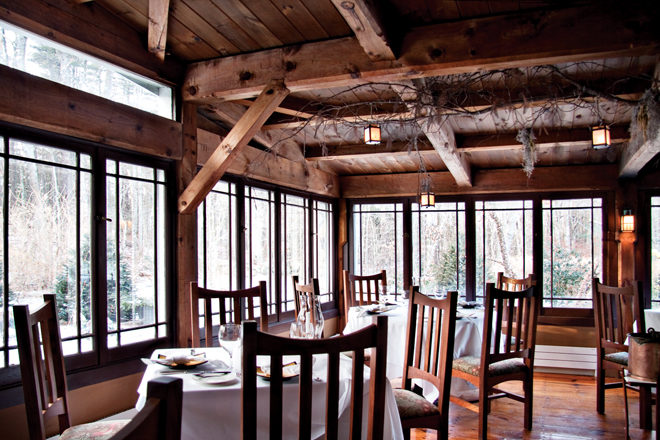 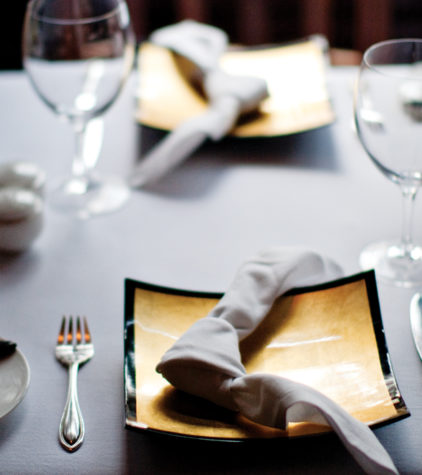 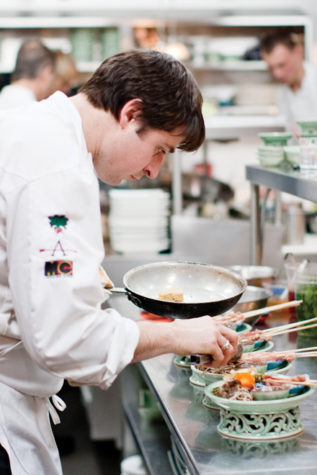 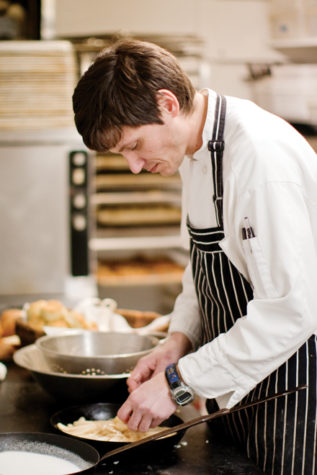 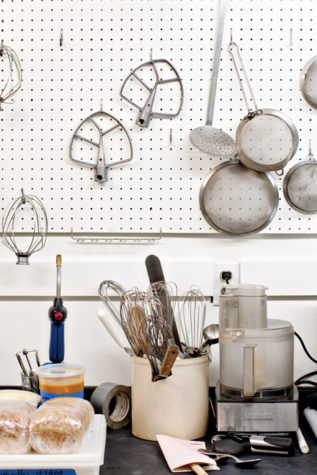 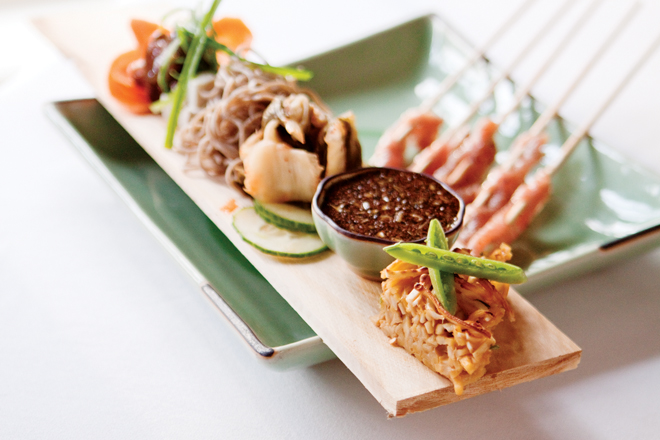 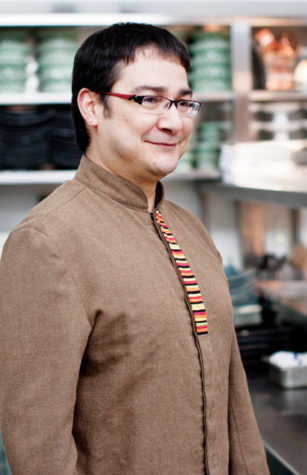 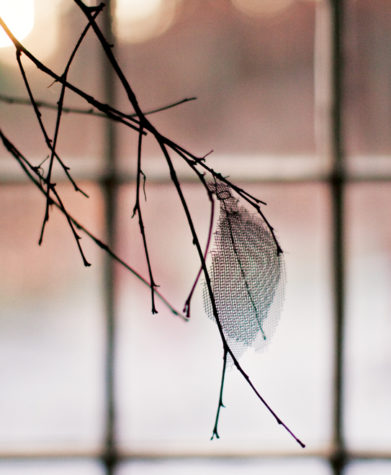 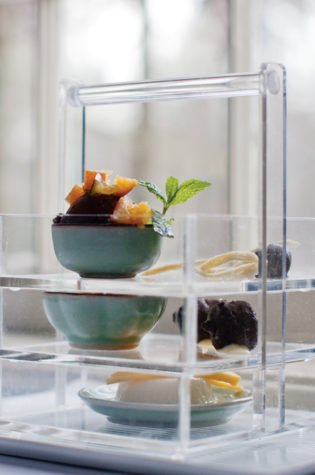 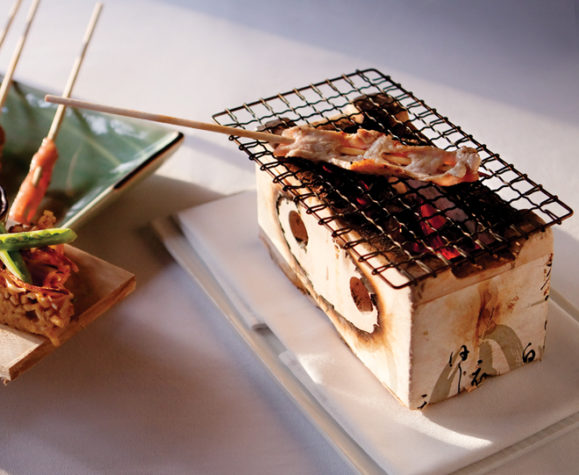 What happens when Ogunquit’s famous destination restaurant goes into hibernation

Five-time James Beard Award nominee Clark Frasier is taking off his suit coat—and his pants. In ten seconds he’s standing on the wide-plank floors on the second floor of a 1765 farmhouse in boxers and black socks, buttoning up a fresh shirt, and shrugging into a second suit. He is preparing for service, repeating his ritual.

More suits and shirts hang inside the closet of a cozy room that now serves as an office. Twenty-two years ago it was the bedroom where he and his partner, Chef Mark Gaier, went to sleep after long shifts at their fledgling restaurant, a farmhouse they conceived of as “a simple country bistro in the woods.”

Since then, Gourmet has repeatedly named their restaurant, Arrows, one of the fifty best restaurants in America, Bon Appetit put it on its list of the country’s ten “most romantic” restaurants, and the two men who turned a drafty farmhouse and its legendary gardens into a destination have been called “pioneers” by the legion of food writers who have reported on them in the last two decades.

It’s December and it’s the last week of service before Arrows lies dormant for the winter. They have just closed their greenhouses. In the gravel driveway a gray plume steadily rises from a silver smoker. The scent of oak catches in your nose as you exit the car. Tonight’s meal will be Asian.

Frasier, an only child, first went to Southeast Asia with his parents when he was 9. He saw the moon landing in a hotel in Japan. “It was all business men at the hotels, traveling alone. They didn’t know what to do with us, so we’d end up in these presidential suites—it was funny,” says Frasier. And it made an impression. His continued interest in culture and history didn’t lead him to cooking school though, but to the Monterey Institute of International Studies. A professor invited him to move to a program in Beijing at a time when there were only a few hundred Americans in China. Frasier went. And he became fluent in Mandarin.

Frasier says: I grew up in California where you can have anything anytime you want. It got to winter in Beijing and I couldn’t understand why there were cabbages piled up on balconies everywhere. Well, that was what we ate for three to four months: preserved cabbage. The impact was intense. When we got to spring, vegetables tasted far better than anything. It drove home all of the things we blather on about today—cooking with the seasons—it was just hammered into me.

Frasier speaks of experience, and that is what Arrows attempts to impart—something more than dinner, something that lasts. Gaier says, “We want people to recommend the restaurant, not a particular dish.” They change the menus, the cuisine, the service, the plates, the decor, the view of the garden. “The real intent is for it to be a whole night’s entertainment,” says Frasier, “but not so overdone that it isn’t reflective of the place, of Maine, of a simple and straightforward region.” That balance requires true craftsmanship; another way of saying that the secret ingredient at Arrows is time. The starter for their sourdough bread is 8 years old and they started their garden in 1992: at the height of the summer it supplies up to 90 percent of the vegetables for Arrows and its sister restaurant, MC Perkins Cove.

The duck still smokes outside as night falls.

Lacquer dishes Frasier and Gaier designed in Vietnam and pedestal plates they selected at a factory in Thailand wait on steel-top in the kitchen. Servers pick stray napkin lint off of jackets Frasier and Gaier conceived, inspired by uniforms they saw at lunch in the Oriental Hotel in Bangkok.

The chefs are tired. They have been traveling up and down the state visiting Kate’s Homemade Butter, oyster farms, and other food microcultures as they finish the final chapters of a new cookbook. The working title is Maine Classics—a compilation of stories and simple recipes based on Maine traditions. The manuscript is due on April 1, but they’ll be busy through spring, so it must be done now. Soon Frasier and Gaier will be in Istanbul, Damascus, and much of Syria, then it’s on to Amman, Jordan, and down to Petra, over to Jerusalem and Israel, then on to Florence and Rome to see friends, followed by a respite in a shack they rent each year on the big island of Hawaii. From there they’ll return to Vietnam and Thailand. It is a vacation and an exploration. Frasier will read up on destinations and recite their histories to Gaier. They will take a cooking class in Petra, the cut-rock Jordanian city “half as old as time.” They will peer at ancient kitchens.

Gaier says: We also did that in Bali. We took cooking classes in Ubud. Of course we know how to cook, but we learn about ingredients, we learn techniques. People ask, “So will you bring back recipes?” but it’s not like that.

I had duck intestines in Beijing. And we ate the chapulines in Mexico—fried grasshoppers—which were really good. They tasted like fried onions or shallots. And I love to go to the markets. In places like Vietnam the level of sanitation—of meat especially—can be shocking, but it’s fascinating. In some of these places you can find everything under the sun, including cooking equipment. At a market in Hanoi I bought a funky little grater made with a piece of gnarled wood. I love looking at the fruits, the vegetables.

Frasier says the travel invigorates the food and keeps the people—both the restaurant staff and the regular diners—interested. Executive Chef Justin Walker and his wife, general manager Danielle Johnson Walker also spend the winter in other time zones. “For us it’s very restorative because this can be a harsh, brutal business,” says Frasier. “Hopefully it’s lovely for the guests, but also for the people who spend long, intense hours here. When you come back your mindset is different, and we share a lot of things.” Balance is something of a philosophy, a way of life, a signature of their food. Gaier says, “Clark grew up eating sushi in Japan and I grew up in Ohio going out for fried chicken. When we’re working on menus it’s a good balance. My style is more simplistic. His can get too far out there, too esoteric. And now we have Justin, for new energy: a triangle.”

Tonight, at a table of eight, three plates of lobster jiaozi are set down first, family style, with numb-and-hot sauce on the side. The gold lacquer plates look heavy, but they are as light as leaves. The silver chopsticks feel like paperweights. We eat for three hours.