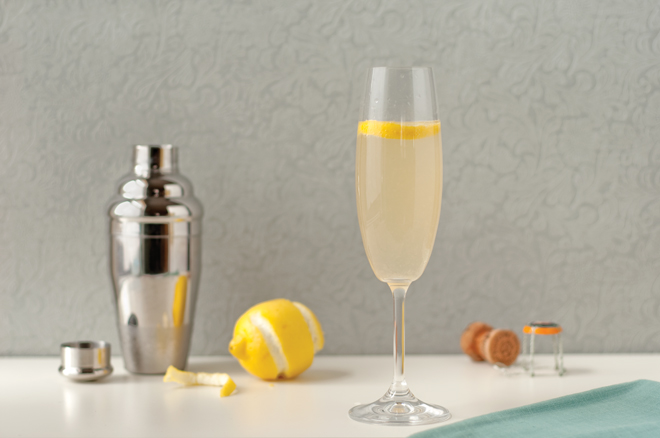 A cocktail known as the French 75 with gin, lemon juice, simple syrup and Champagne.

This Prohibition-era cocktail hits with remarkable precision. Like a Tom Collins that packs a punch. A little gin and lemon topped off with Champagne.

Tilar Mazzeo always wanted a sister. She grew up with three brothers—Sam, Andrew, and Matthew. They lived near Alfred Lake. Fishing was a daily affair. Her brother Andrew began brewing beer at an early age and still makes a special batch each time one of the Mazzeos gets married. Growing up, the boys all hunted. Which ultimately caused Tilar to become a vegetarian, having  discovered a gutted deer in the backyard, hanging lifeless from a tree.

The boys have all since left the state. Tilar left for a time and eventually came back to teach travel writing and British Romantic poetry at Colby. Their parents still run Mazzeo’s, the stove shop on Route 90 in Warren.

She knew that she needed to leave Maine to come back. She went to the University of New Hampshire and later attended the University of Washington for graduate studies. On weekends, Tilar began surveying the Northwest’s vineyards and asking local experts questions about oenology.

Curiosity turned to obsession. She moved south to immerse herself in California’s wine culture. She focused on smaller vineyards in Napa and Sonoma, writing two guidebooks to some of the lesser-known wines with local distribution: Back Lane Wineries of Sonoma and Back Lane Wineries of Napa.

Once a week, Tilar would get together with her girlfriends to drink Champagne and catch up. They all had a fondness for Veuve Clicquot, which became Tilar’s next big project, The Widow Clicquot (HarperCollins, 2008). The book follows the life of the veuve (French for “widow”) behind the iconic Champagne. During the French Revolution, Barbe-Nicole Clicquot Ponsardin lost her husband to typhoid and inherited his collapsing wine business. She realized that the only way her inheritance would survive was to redefine the market. Her audacity proved triumphant. She presented her Champagne at crucial celebratory events during the war, wined and dined such figures as Napoleon and Josephine Bonaparte. She even smuggled 10,000 bottles of bubbly past the war’s naval blockade into Russia. Her creativity and persistence transformed her product into the gold standard of a luxury industry.

Tilar’s early years contributed to her pursuit of some of the finer things in life. She is currently researching her next book in the perfume houses of southern France. It’s the story of Coco Chanel and it’s called The Secret of Chanel No. 5: The Intimate History of the World’s Most Famous Perfume. Champagne and perfume: a natural progression in the female psyche. I’ll toast to that.

The Secret of Chanel No. 5 will be out in October from HarperCollins.

The French 75
Adapted from Harry Craddock’s The Savoy Cocktail Book, 1930

This drink is named after the 75-millimeter gun used in World War I by the French artillery. It is said to be so strong in alcohol content that its “kick” is comparable to that of the gun when shot. The French often use brandy in place of gin, but The Savoy Cocktail Book, the first to print a recipe for the French 75, calls for gin. Its author Harry Craddock left the United States during Prohibition and moved to London to work at the American Bar at the Savoy Hotel. He was one of the most famous barmen of the 1920s.

Shake the first three ingredients with ice. Strain and pour into a
tall Champagne flute. Top off with Champagne. Garnish with a twist of lemon.