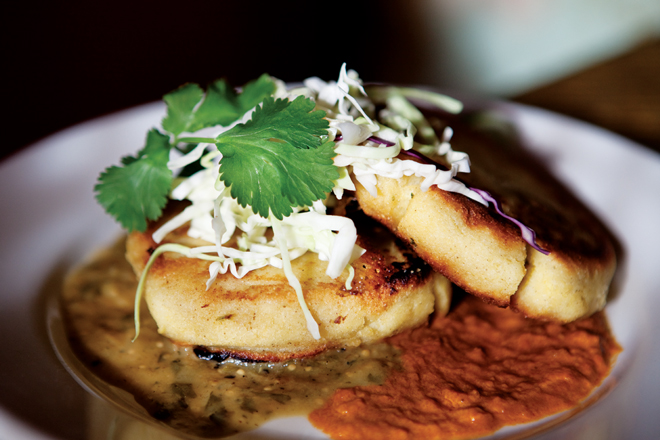 A friend from Los Angeles sent Eloise this dress, saying it would be perfect for her restaurant. 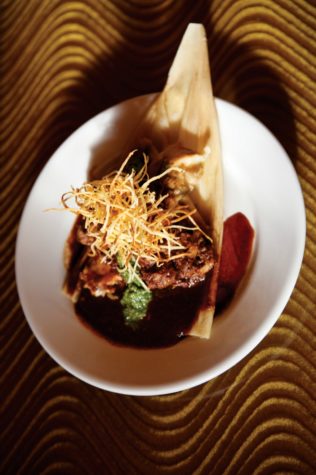 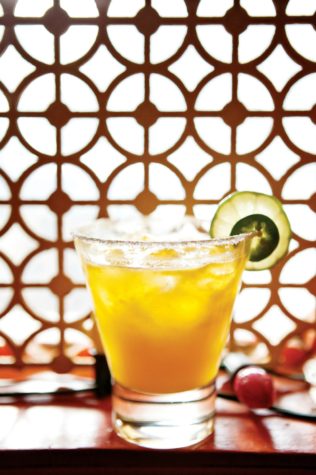 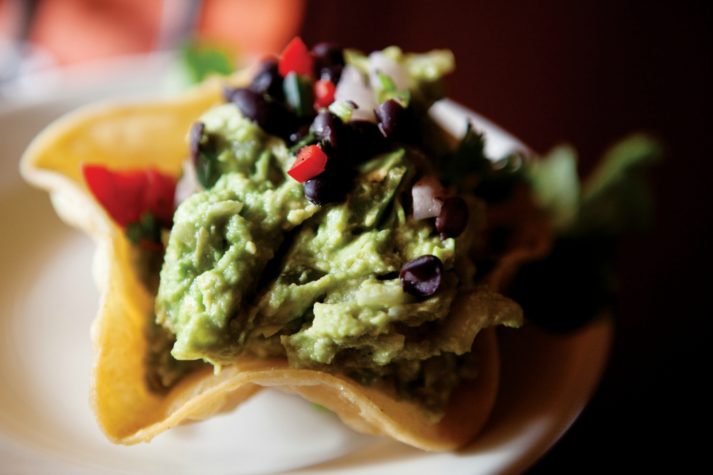 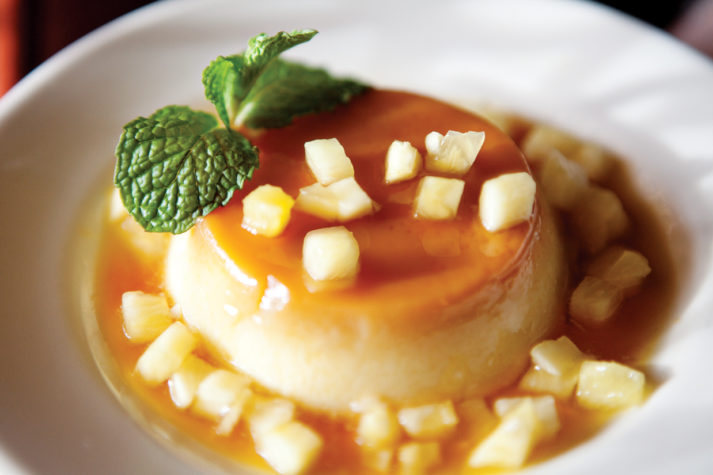 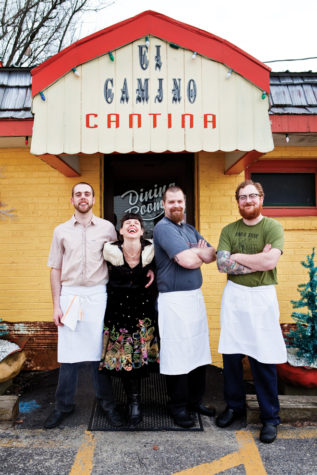 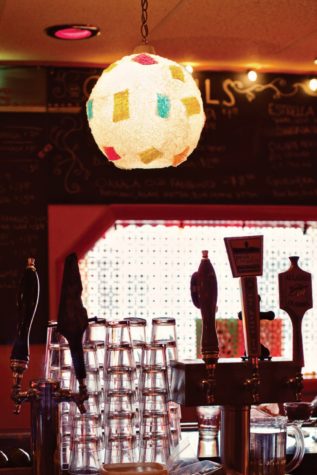 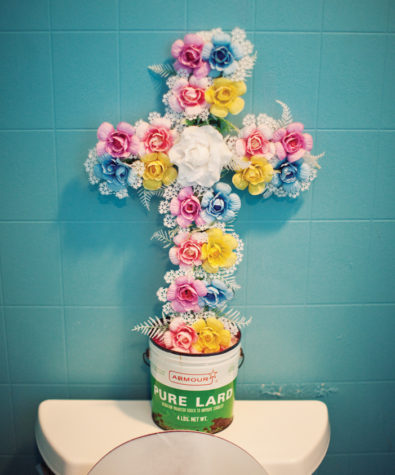 An ode to roadside Mexicana 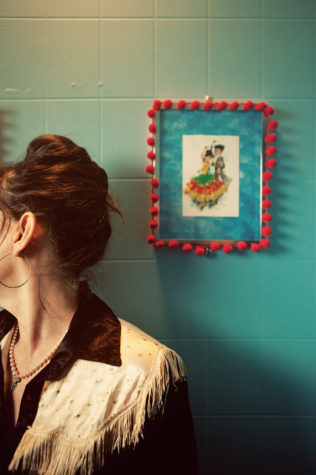 Eloise wears a fifties top, lowrider chic to the core 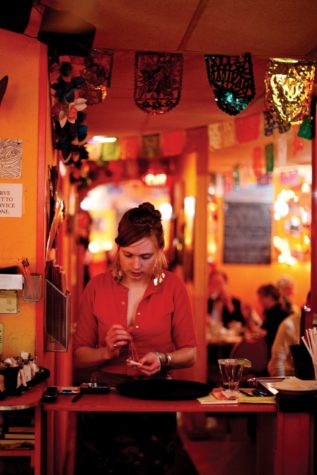 The right way to go for a little California sunshine, all wrapped up in a taco shell. La comida justa around the corner in Brunswick.

Cross the threshold at El Camino and you enter another world. From the warm orange walls decorated with hubcaps and license plates to the papel picado hanging low from the ceiling to the custom lights made in Tijuana. The mood is raucous and inviting, and it smells fabulous. The whole recycled, Mexican, low-rider chic takes you out of Brunswick and plunks you down in what could be a Tarantino film set. El Camino delivers something just as simple and badass: a damn good taco that’s the real deal.

El Camino evolved from a hunger. Six years ago, Eloise Humphrey moved from Northern California and was missing carnitas, fish tacos, and real guacamole. “To me, Mexican food tastes like sunshine, and in the middle of a hard winter, I really missed it.”

The result: El Camino, the Mexican cantina in Brunswick owned by Humphrey, her twin sister, Daphne Comaskey, and Daphne’s husband, Paul. The trio had successfully run another restaurant, Kate’s Kitchen (named for Paul and Daphne’s daughter) in San Francisco for three years in the early nineties, so their track record was good. El Camino has continued that success. The name was derived from a nod to Eloise (El) and the Spanish word for “way” or “road” (Camino).

El Camino customers are loyal, and there is
much to be loyal about: from the seasonally changing specials board (Maine shrimp, black trumpets, spring lamb) to the pomegranate margarita (declared one of the country’s twenty best by GQ magazine in August of 2008). Paul is the front-of-the-house face. There’s no television at the bar, and Paul, a musician by day, seems to know everyone. He jokes about his “two wives” in the kitchen: the sisters Daphne and Eloise, yin and yang, the heart and soul of the restaurant.

They start every day at around 8 a.m., side-by-side, preparing the ancho-chile-rubbed skirt steak, house-made pork chorizo, and lamb barbacoa in their intimate kitchen. The sisters have been in the food business since they were 13 and it shows. There is an easy confidence, camaraderie, and passion in everything they do. With a simmering pot of beans on the back burner, the aromas of cilantro, chiles, and cumin waft throughout the restaurant. Their bond was tested this past year when Daphne was diagnosed with breast cancer. With Daphne now in remission, Eloise is thrilled to have her sister back in the kitchen. Daphne is happy to leave the crocheting behind for kitchen duties, and relieved to shed her “granny-square-master Daph” title. Emerging from that funk of a year, the mood at El Camino is irrepressible. These are happy folks.

Their culinary philosophy can be traced back to Eloise’s roots. She cooked for years in both New York City and San Francisco alongside Bobby Flay at Jonathan Waxman’s restaurants Jams and Buds. She catered Francis Ford Coppola’s daughter’s wedding. But she was being suffocated by too many oversized egos. Not wanting to spend the rest of her life with chefs, she vowed to make great food with great ingredients that anyone could afford. Those years of cooking in the Bay Area mean these two know their way around local, seasonal, sustainable cuisine. They take that credo seriously. The list of farms that supply El Camino is proudly displayed on the menu, along with a New Yorker cartoon—the one where two unsuspecting diners are surrounded by an unruly mob of farmers and their server, who says, “We think it’s terribly important that you meet the people responsible for the food you’re eating.”

Humphrey and the Comaskeys estimate that in the early fall their menu is 90 percent local. The rest of the year it is still a majority proposition. There is no irony lost on the fact that much of the Mexican culinary tradition is based on citrus, peppers, and avocados, ingredients difficult or impossible to source locally. However, practically everything else
on their menu comes from the farms of Maine.

The list of food producers they do business with is a who’s who of Maine’s farm-to-table movement: Caldwell Farm beef, Fishbowl Farm, Hahn’s End cheese, Mainely Poultry, Harbor Fish, Olivia’s Garden, and Oyster Creek Mushrooms, just to name a few. They have such a close relationship with “their” farmers that they’re catering the wedding of Gabrielle Gosselin and Nate Drumond of Six Rivers Farm.

In the winter months when obtaining local produce is a challenge, El Camino can pull from their deep larder. When Maine’s farms are producing like mad, the sisters add to their already busy summer schedule by preserving anything they can get their hands on: roasted tomatoes, corn, tomatillos and peppers, and pickled vegetables. All the farmers they work with know that any bumper crops can be brought to El Camino (“They know I’m a sucker, can’t say no,” says Eloise). The summer labors pay off: for Valentine’s Day El Camino served a flan flavored with rosewater that Eloise had put up in the fall. Meshing New England traditions with New World flavors, El Camino serves up sustainable food—with a touch of pico de gallo.