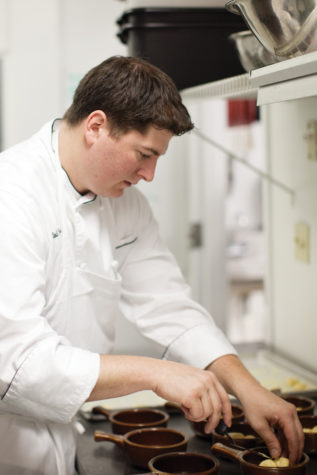 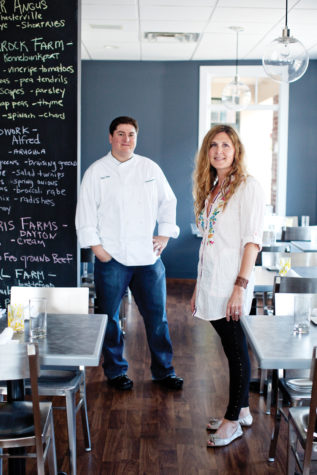 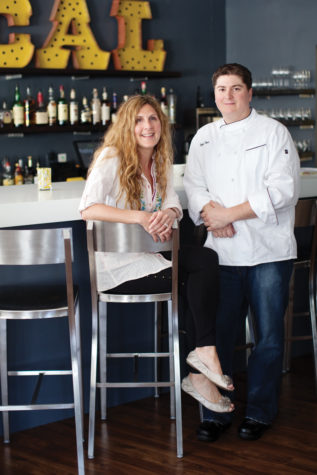 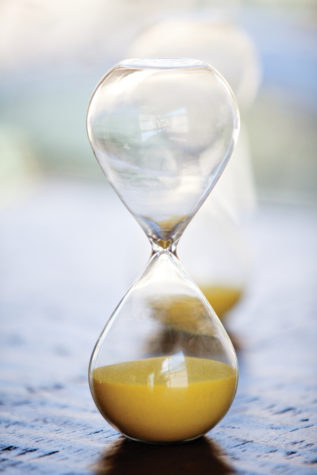 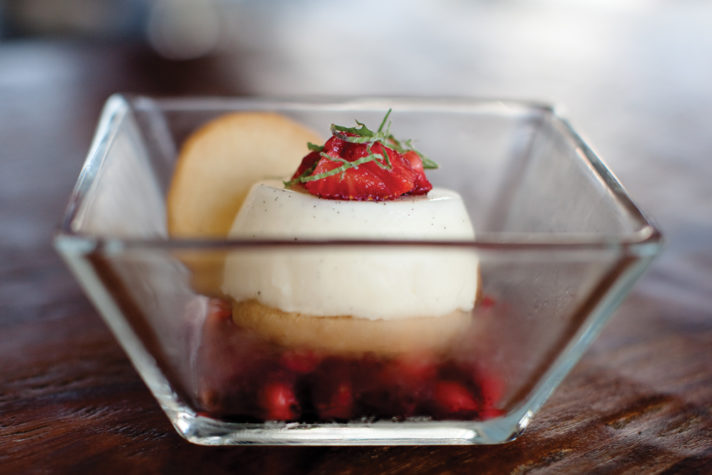 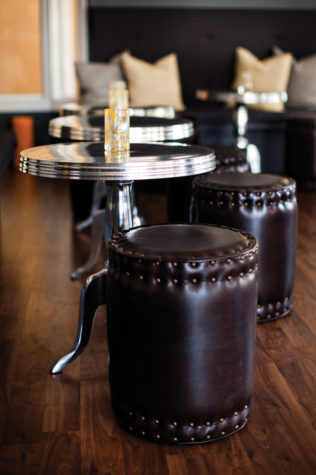 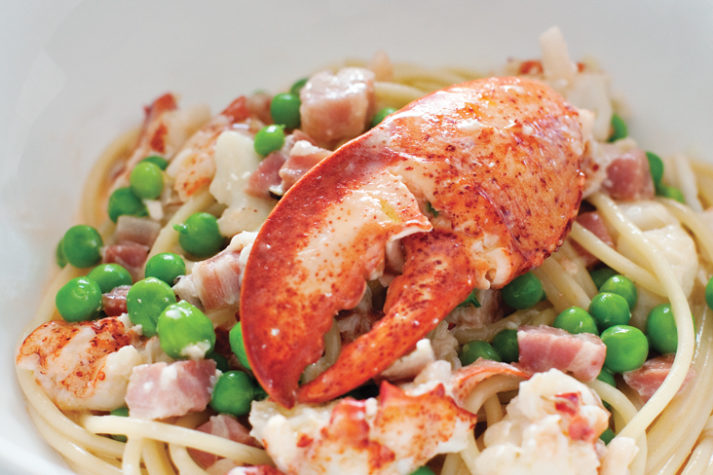 The lobster carbonara with fresh peas 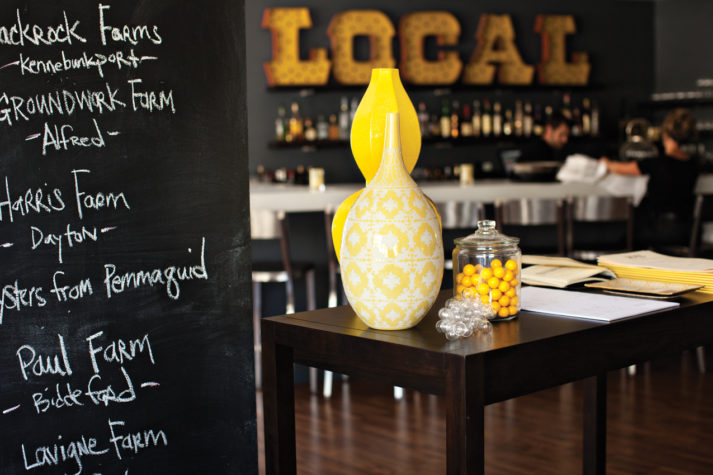 A chalkboard lists local farms contributing to the menu 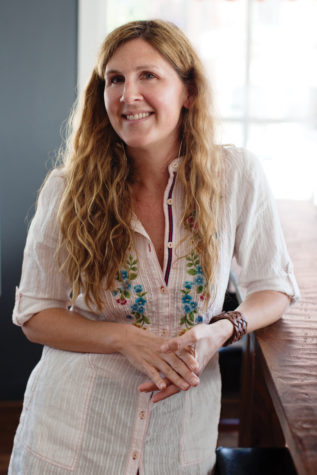 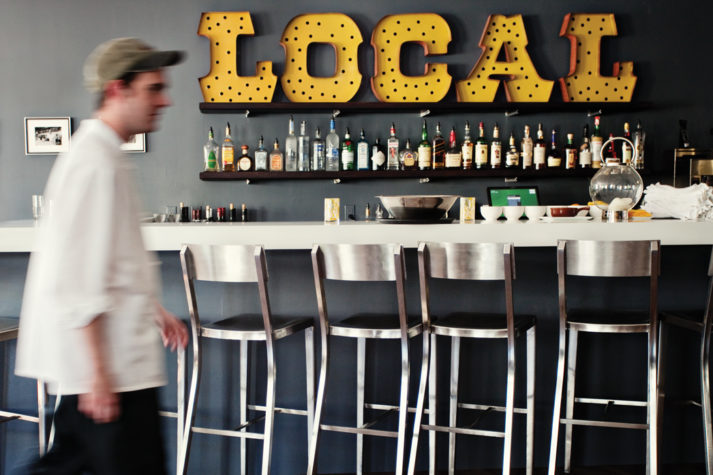 The custom made bar is accented with yellow sand hour glasses 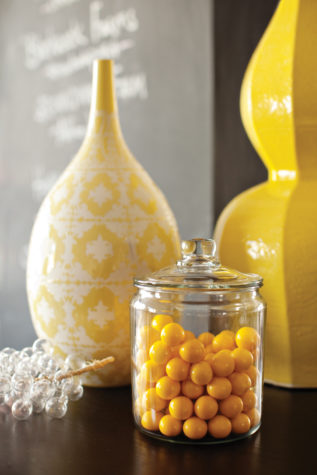 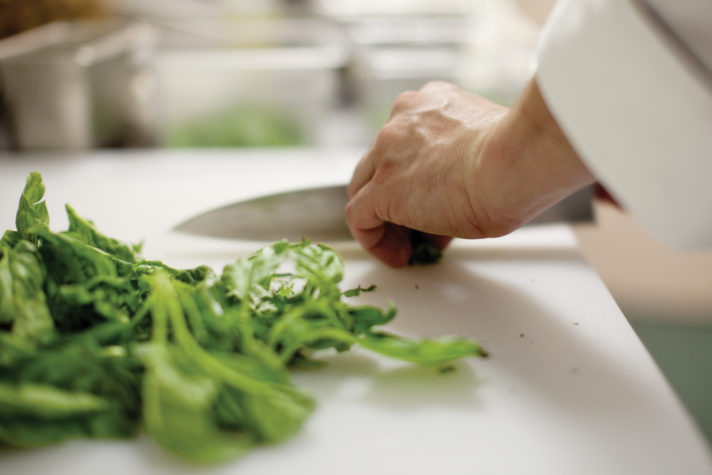 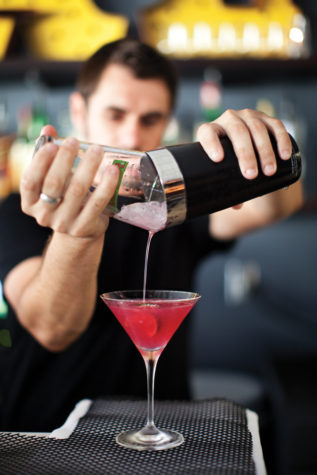 A bartender pours a specialty martini 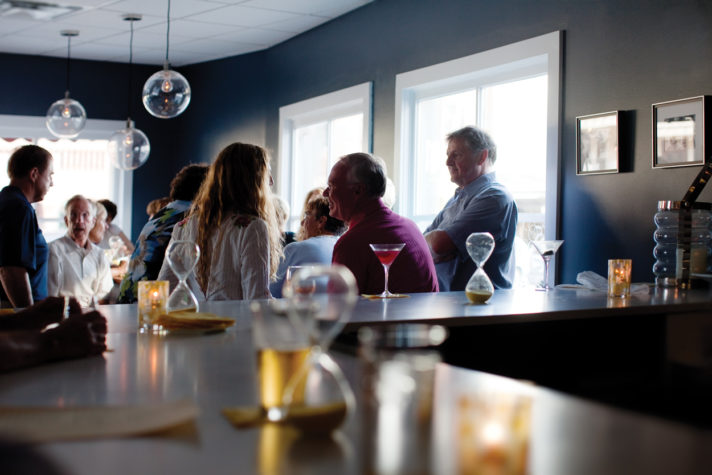 Guests sit around the communal table 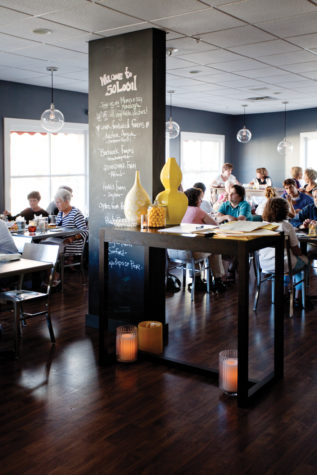 The first thing I noticed at 50 Local in Kennebunk was a floor-to-ceiling chalkboard displaying the names of local farms and the fruits of their labor. My second observation was the yellow Converses worn by the wait staff. Although the restaurant is relatively new, it was apparent
that great care has gone into the details, from the food to the wine list to the decor.

The chef, David Ross, took a few minutes to talk with me about his background and inspiration for the menu. His wife and partner, Merrilee Paul, stood behind the bar, mixing up a St. Germain cocktail, which is noted on the menu as having fresh lemon juice and bubbles. Ross took to the stove at the age of 15, when he worked the line as a short-order cook in his hometown of North Hampton, Massachusetts. He has since worked in several New York City restaurants, including Oceana, Tabla, and Les Panasse  in the St. Regis Hotel. Ross and Paul met on Hanover Street in Boston’s North End, when Ross was working as the chef at Luca, an Italian joint. Paul was a regular customer and lived around the corner. Her background was in hospitality, and after getting together the couple decided to combine their skills in the front and back of house and open a restaurant of their own. The two looked at properties in Boston, scouting out locations that would suit their concept. During the search, Paul became pregnant and gave birth to their son, Owen, leading them all the way to Maine, which they deemed a great place to raise a child.

When they arrived, 50 Main Street in Kennebunk was on the market, and the two jumped at the opportunity. Previously, it was a bakery with pink-and-gray vinyl flooring. Luckily, the place was equipped with an extensive kitchen, making the venture a bit more affordable. Paul and Ross teamed up with local designer Nicki Bongiorno to build out the space. Their objective was to design, construct, finish, and open a 64-seat restaurant in sixty days. Bongiorno is the owner of Spaces, an interior furnishings boutique, so she had a range of restaurant accessories at her fingertips. From the fishbowl light fixtures to the antiqued metal letters that read “LOCAL” to the patterned wallpaper in the bathroom, Bongiorno’s unique taste and evident skill as an interior designer is a major contribution to the restaurant’s charm. Paul’s friends and family provided much of the physical labor, putting an enormous amount of work into the build-out, from setting the wooden floors to finishing the walls to upholstering the lounge seats.

When it came time to create the menu, Ross decided to keep it simple, seasonal, and representative of his personal tastes. “The chalkboard is the beating heart of the restaurant,” as Ross puts it, since it displays the names of the local farms he buys from and the ingredients they produce. Luckily, the restaurant is centrally located between three farmer’s markets: Wells, Saco, and Kennebunk. Ross added, “The folks from Blackrock Farm (a vegetable farm in Kennebunk) and Harris Farm (a dairy farm in Dayton) will bring stuff in at will,” which he then incorporates into the menu. Bongiorno notes that, for her, the names of the farms bring back memories of picking strawberries and apples as a child.

The menu’s diversity demonstrates the chef’s versatility and influences. On the “Starters and Snacks” portion is a house-made ricotta with crostini and a chutney that changes daily. It’s clear that working in the kitchen at Tabla, Danny Meyer’s critically lauded Indian restaurant overlooking Madison Square Park, gave Ross a knack for mixing spices and making chutney. A portion of the dishes fall into the category of French bistro fare, such as the mussels and fries (which were perhaps the best I’ve ever had). Stout little fried potatoes sit atop a pile of perfectly cooked mussels swimming in a bath of buttery white wine, herbs, and garlic broth. For entrees, there is an entrecote (a 12-ounce rib-eye steak) with fries, and a fish stew with sausage and spicy tomato broth that is reminiscent of a traditional Portuguese dish. The bar menu includes a local burger with aged cheddar and pickles and a lobster roll that left the kitchen looking camera ready. There are also Asian accents here and there, thanks to the fantastic Asian grocery store down the street called Trans Market. The crispy spring rolls with chicken confit, soy, and ginger are a favorite among the regulars. For dessert, diners can indulge in the divine beignets, all resting around a bowl of warm crème anglaise.

Ross walked me through the wine list, singling out bottles that he had barely marked up in price. “Some of these bottles are so good that I want people to try them even if we’re not making much money on them,” he says. He’s included small-production vintages that are remarkably hard to find anywhere else in the state. The cocktail list is also modestly priced and features Paul’s spin on traditional drinks, many of which seem to be named after personal references and inside jokes like A Mai Thai for Dave, the John Daly, and Mamie Taylor.

50 Local is a fine example of a husband-and-wife team bringing their talent and passion to the state of Maine. They are not only creating a successful life for themselves, but also a comfortable spot for the rest of us to have an inspired meal coupled with an excellent glass of wine.