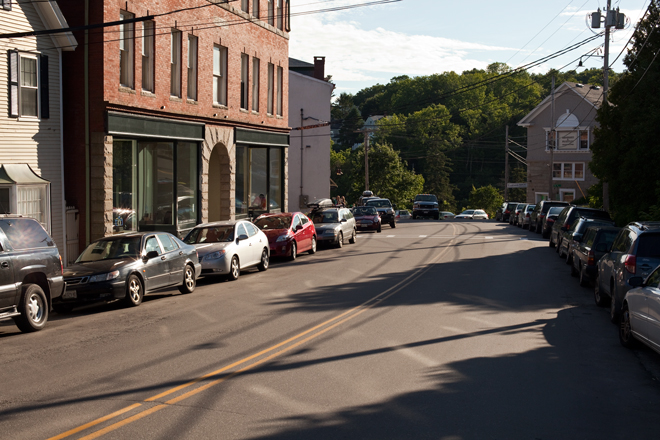 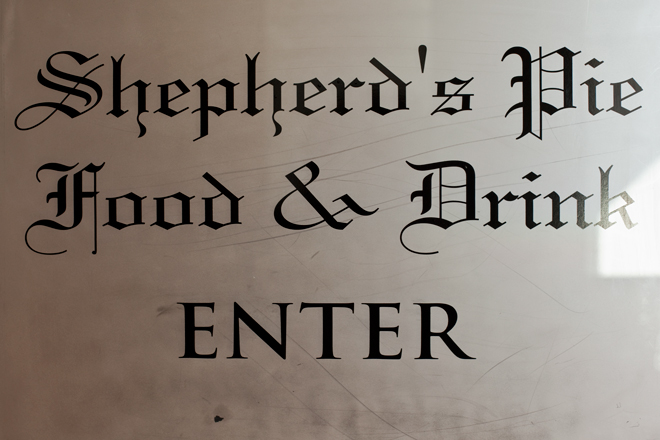 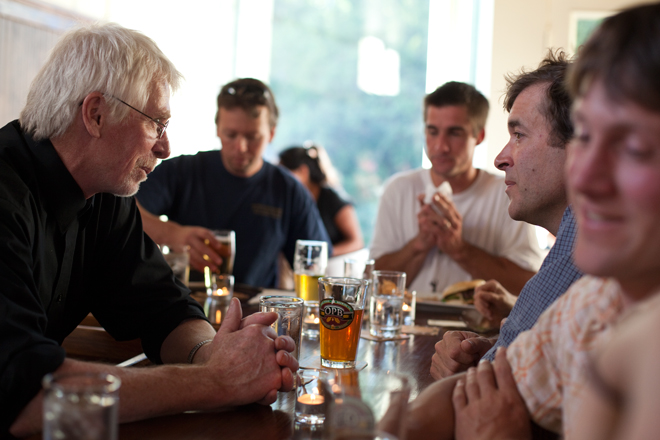 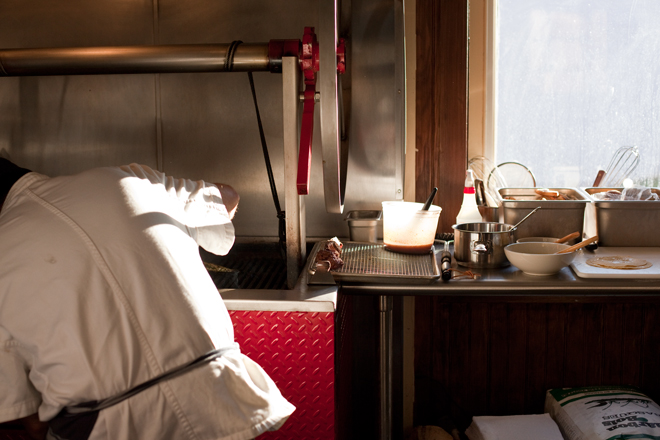 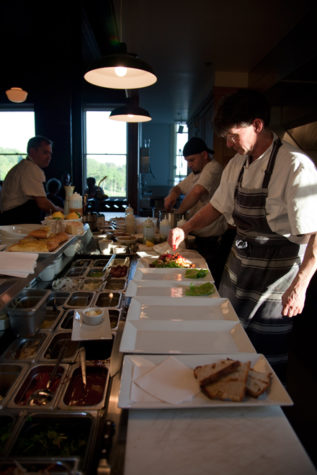 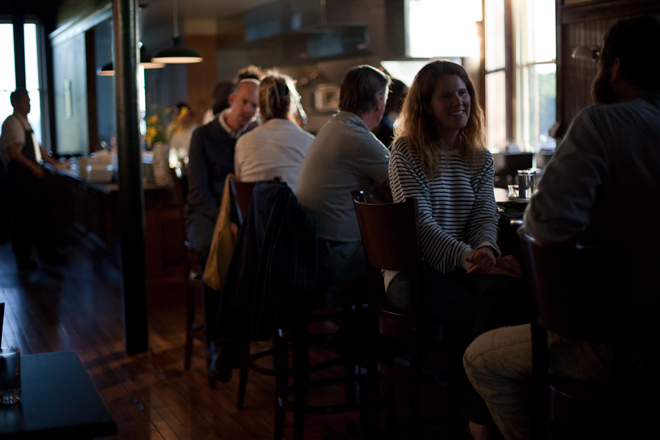 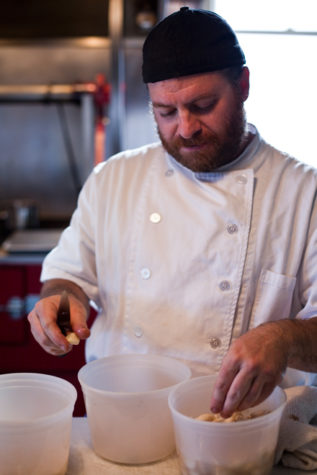 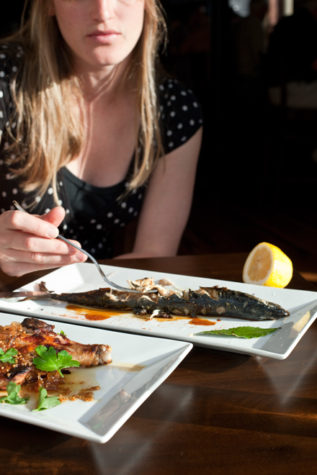 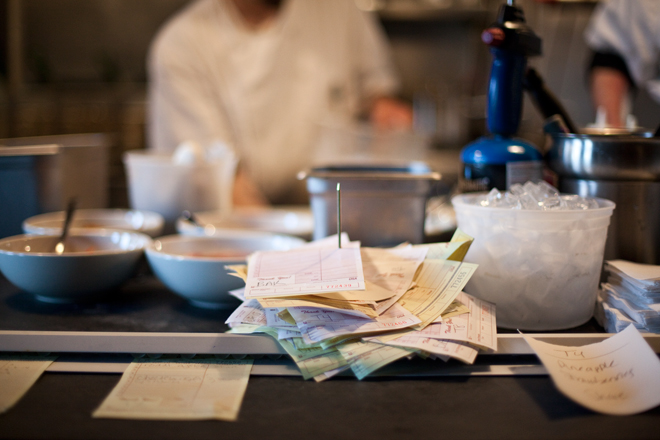 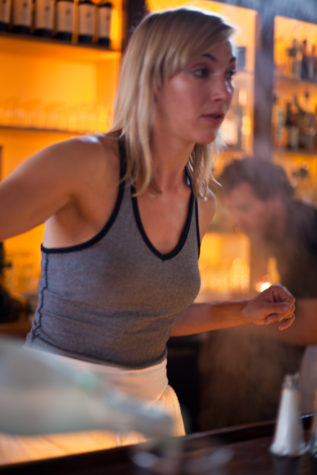 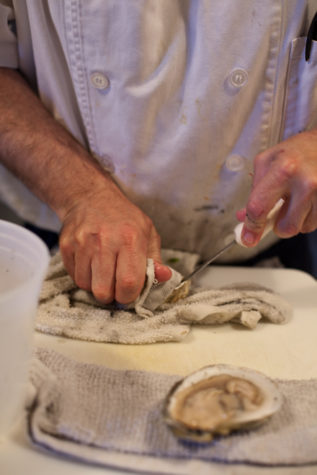 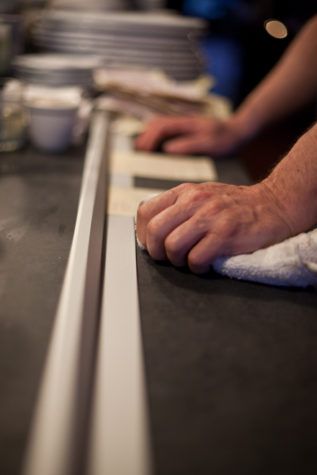 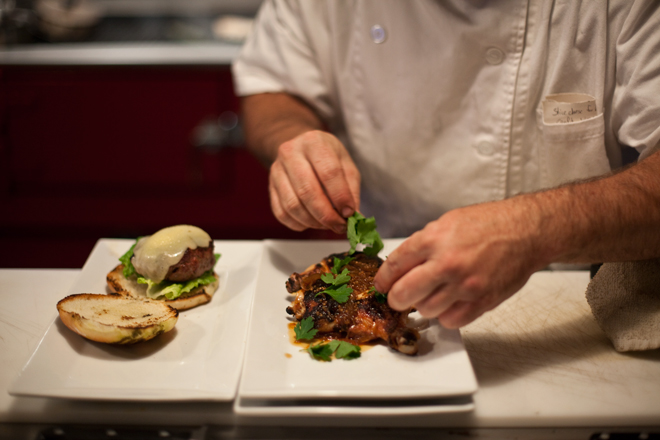 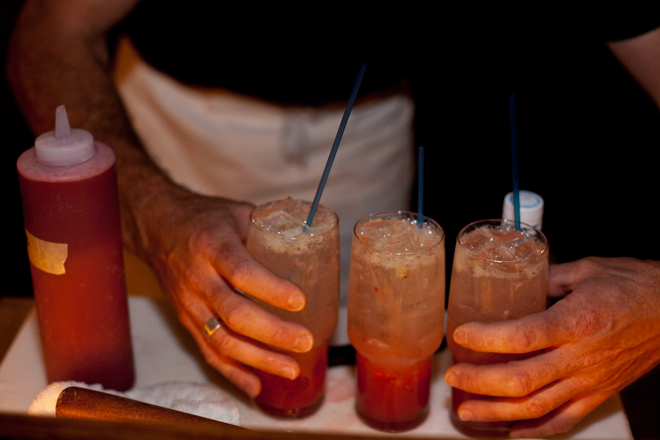 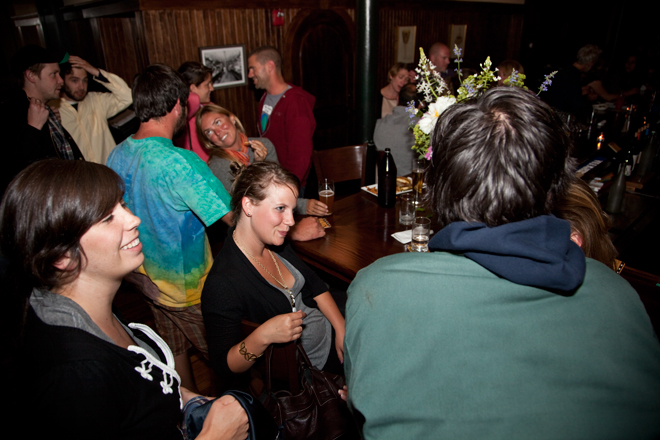 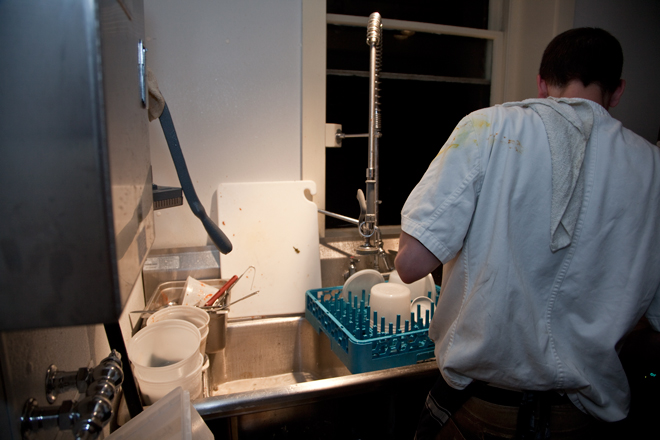 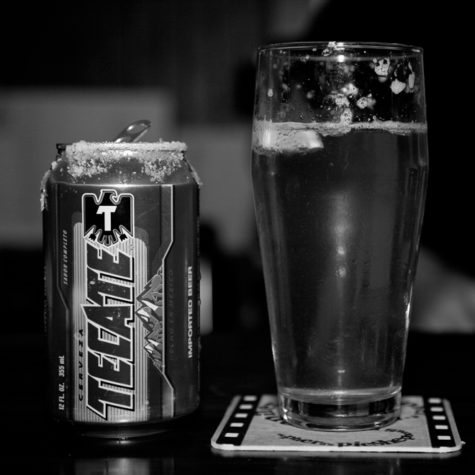 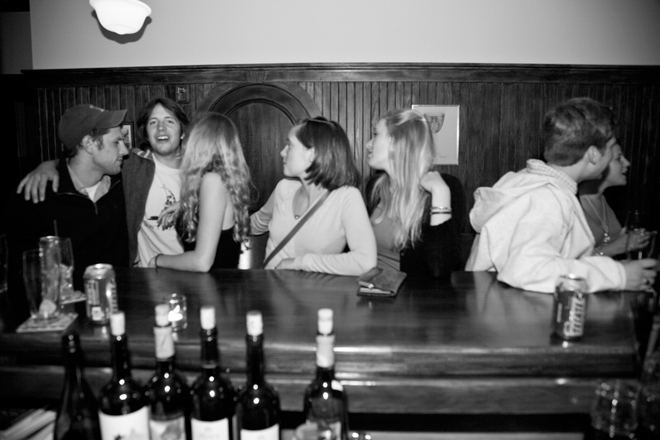 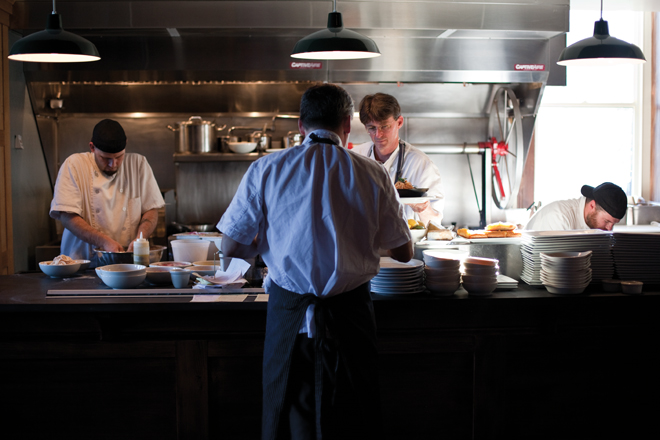 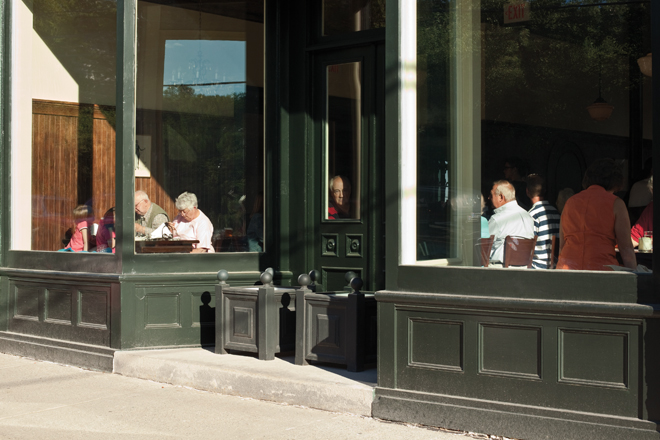 The early evening light passing through the stately windows in the old Pen Bay Oil Company building sets a pleasant mood for an after work cocktail and a little conversation. 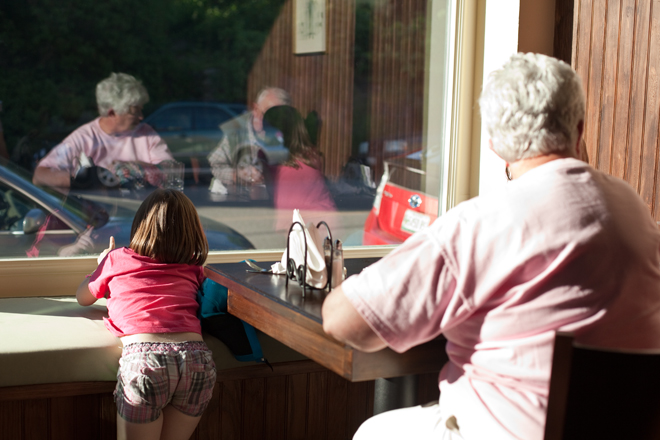 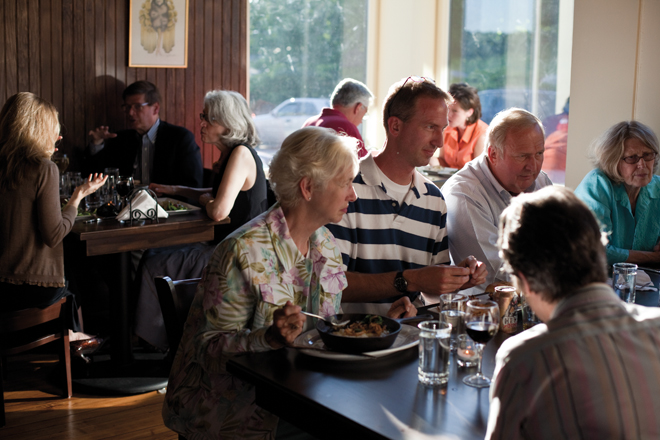 Even in the first few weeks Shepherds Pie has gained a following. 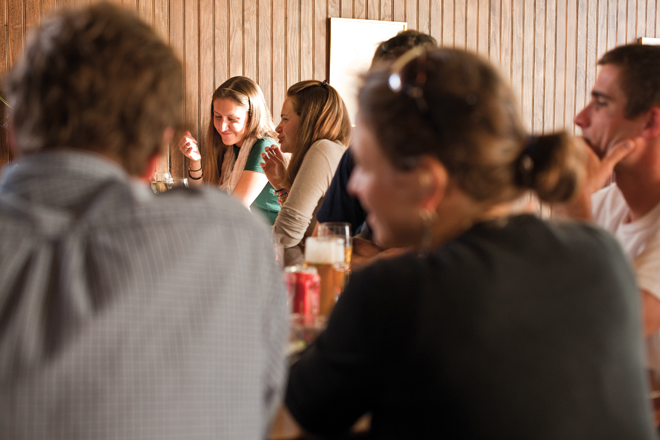 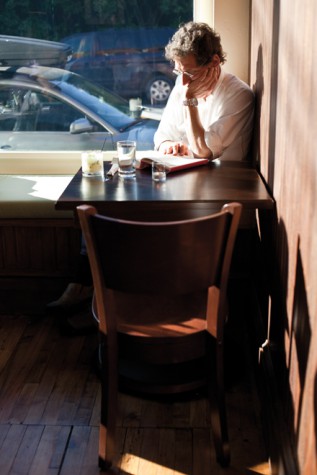 A customer takes advantage of the casual atmosphere. 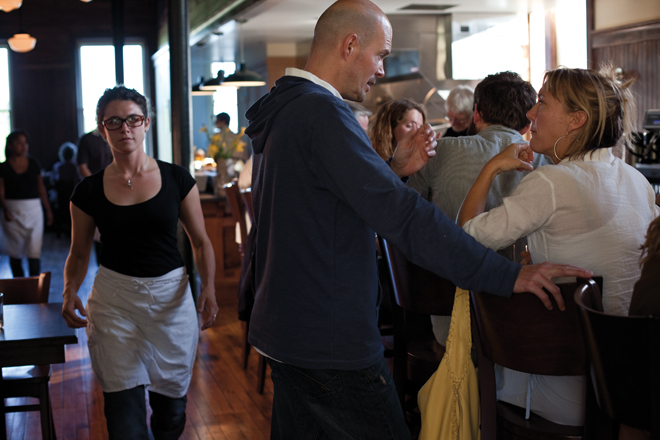 The bar fills up on a busy evening. 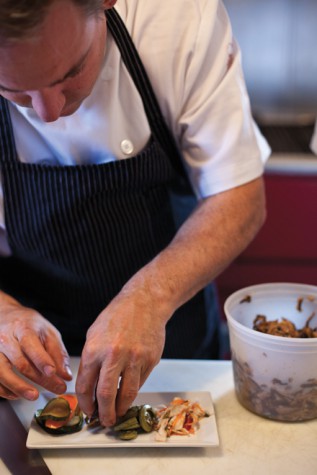 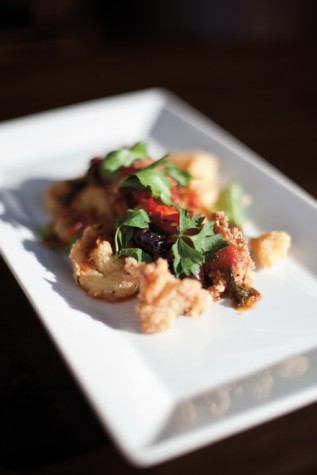 One of Brians beach inspired dishes is the fried fresh squid with hot peppers and olives. 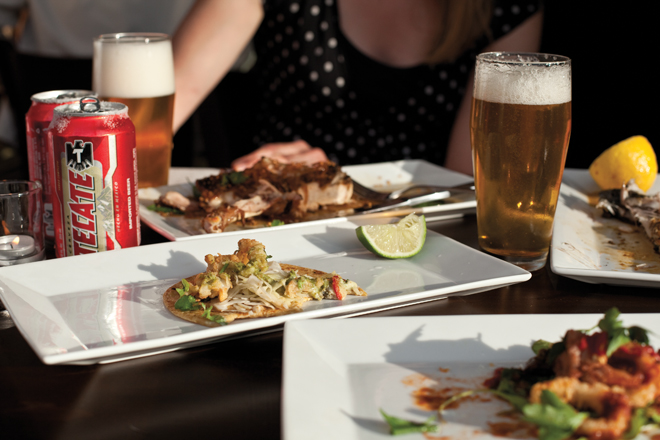 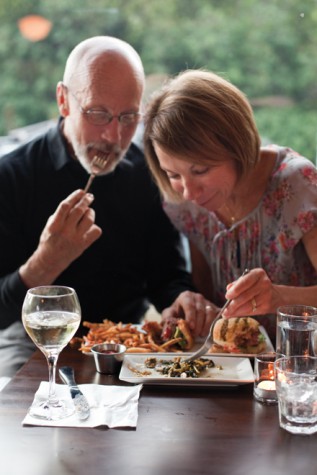 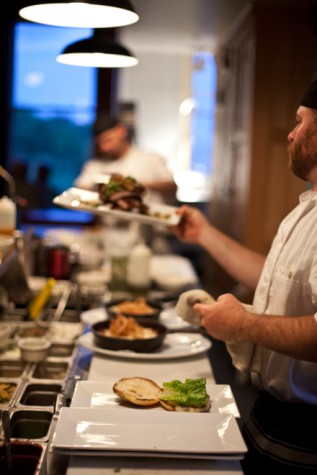 Chef Mark Senders and Rod Norwood serve up a stack of spiced ribs.

Brian Hill has succeeded in opening another adored restaurant. Shepherd’s Pie was his vision for a comfortable spot, serving delectable food by the sea.

From the garde-manger station at Francine Bistro in Camden, I watched Brian Hill plate every entree with practiced precision and certainty. No dish left the kitchen without his stamp of approval. His methodic execution of each task, evidence of a long career in kitchens and his absolute devotion to the food—from the sourcing of ingredients to the rehearsed prep to the final ensemble—is a thing of grace.

The concept for Francine was audacious and entirely his. Each day at noon, Hill sits and writes a menu that reflects the day’s catch, the herbs brought in from a neighbor’s garden, and the produce available at the Camden Farmer’s Market. The menu is a tangible reflection of his mood, the weather, and the day’s provisions. The restaurant does not run without Brian at the helm.

Today, Hill stands on the other side of the kitchen, at his new restaurant, orchestrating the preparation of food that is his in concept but not entirely in execution. This is evidence of the evolution of a successful chef, one whose formula works, whose popularity has grown, and whose food is dependably good. In this case, great.

It came as no surprise that Hill’s vision for Shepherd’s Pie, his just-opened eatery in Rockport, was less formal, more comfortable, and more accessible to a cross-section of patrons. In fact, many chefs, after ten hours of plating their creations, want to retreat to a place where they can pull a stool up to the bar, down some oysters with a cold beer, and eat something primal like…shepherd’s pie.

The restaurant is located in a red-brick building on Main Street, with a dining room overlooking one of the coziest harbors in Maine. The building used to be the Pen Bay Oil Company, and like many storefronts in Rockport, it has been empty for years. Until Shepherd’s Pie opened, the main strip often emptied out around 5 p.m., save for the occasional truck whose owner was fishing for mackerel in the harbor and the once-a-week crowds attending the Bay Chamber Orchestra at the Rockport Opera House. Yet today, the town has become a haven for students from the Maine Media Workshops, as well as writers, artists, poets, glassblowers, designers, woodworkers, and other creative types who come together and generate stimulating conversation well into the night. Shepherd’s Pie keeps its doors open seven days a week until midnight, which has provided an answer to the reoccurring question the locals have been asking for years: “So, what do we do now?”

Jim Haines, the manager of the restaurant and Brian’s front-of-house liaison, told me that they did 178 covers on their opening night—no small number in a town of only 3,000 people. When I asked friends what they thought of the place, they all said, more or less: It feels like it’s been there for years. The ample floor space includes a backroom seating area that offers diners a privileged view of the beautifully designed open kitchen. A fire-truck-red wood broiler is the primary heat source, controlled by an enormous spinning wheel that adjusts the food’s proximity to the fire. A sturdy wooden bar stretches across the restaurant toward another seating area, which also serves to advertise the dining experience to sidewalk traffic. Posted on the shiplap wall is a black-and-white image of the 1902 general store that once occupied the same space. The architect, Jon Priestley, and the project manager, Mike Sabatini—in close consultation with Hill—did a fine job of maintaining the integrity of the interior. The team even hired a tin-ceiling specialist from Brooklyn, New York, who installed a gorgeous ceiling reminiscent of an earlier era.

And then there’s the food. The menu is broken down into Bar Snacks, Plates, From the Grill, and Sides, eliminating the traditional progression of courses. For instance, you could start off with a plate of fresh shucked oysters with pickled shallots and horseradish, move on to a smoked alewife caesar with garlic croutons, and finish with an organic burger with tomato confit, Eleanor Buttercup cheese, and purple mustard. Or you could order a plate of seasonal pickles and a few curried pickled eggs, grilled mackerel with sea salt and lemon, and fried clam tacos with avocado, cabbage, and green tomatoes. Two not-to-be-missed meals are the pork belly sandwich, with its sharp contrast between luscious fat and acidic coleslaw, and the pepper and cider barbequed chicken with mustard seed and caramelized onions, a dish that one wishes she could whip up at home, but dare not try. The baked beans with candied bacon are sweet, smoky perfection, and the shepherd’s pie will keep me fastened to the bar from January till the ground thaws. And for dessert, order the pineapple upside-down cake with a dollop of whipped cream. Once consumed, just sit back and take a minute to appreciate things that grow in the tropics.

As any bar-food nut knows, there is only one appropriate beverage to accompanying wings and tacos: a cold beer. The beer selection, from locations as far flug as Mexico, Sri Lanka, and Milwaukee, is undeniably inspired by the chef’s obsession with fishing and surfing, much of which he’s done along the shores of Mexico. For dark-beer enthusiasts, the Lions Imperial Stout is an excellent brew. The bar carries Sweetgrass Gin and Cold River Vodka, two locally produced liquors. Every night the bar offers a house cocktail, and a “fine house red, white, and rosé” for $4 a glass.

Shepherd’s Pie has quickly become the beating heart of its community. The restaurant gives people what they need at the end of the day: food, drink, and conversation. Folks wait on the sidewalk for a table to open up, and parking is actually a challenge. With this new infusion of nightlife and energy, it’s almost hard to remember that Rockport was once a sleepy coastal Maine town.