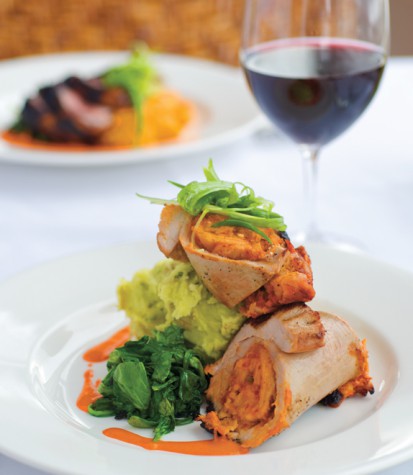 Never has an author captured such a range of culinary talent in Maine. This book is a testament to the effort made by area chefs to bring sustainable consumption to the forefront and quality cuisine to the table.

Michael Sanders came a long way before publishing his new book, Fresh from Maine, a cookbook that traverses the state, from Kittery to Mount Desert Island, documenting the lives and cuisine of Maine’s most accomplished chefs.

In his younger years, Sanders was an editor at Simon & Schuster in New York City, which is where he met his wife, who was an editor of Glamour magazine at the time. The two embarked on a series of adventures: a year in Les Arques, a French village with a population of 140 and one of the best restaurants in France; a year in Hungary where Sanders’s wife did a Fulbright exchange; and a few months in the Soviet Union, where he learned Russian. He casually mentions that he has two gifts: “learning languages and throwing a javelin.” When it came time to settle down, he chose Maine for the same reason that so many of us have: the people, the landscape, the way of life. “The more advanced a society becomes, the greater the loss of tradition,” Sanders says. It’s a statement that says a lot about how  Maine chefs have remained loyal to traditional methods of cooking and sourcing food. While writing the book, he was uniquely impressed by how committed working Maine chefs are to supporting local farms and fisherman.

He categorizes the restaurants he profiles as “sustainable fine dining,” an acknowledgment that this value appears to be consistently held throughout the state. The book’s photographer, and Sanders’s business partner, is Russell French, who eloquently captured the food, kitchens, and chefs of Maine. The book also profiles each chef “at a glance,” asking them questions such as “Who are your culinary heroes?” “What’s your favorite cookbook?” and “What country has the most understated food, in your opinion?” These questions make the chefs more personable to their audience, helping to erase the divide between the kitchen and the dining room. And for those of us who may need a little more encouragement to leave our familiar haunts, the book acts as an invitation to explore the state and its many culinary offerings.

When I asked Sanders what he likes to eat at home, he said that his favorite meal is a nice bottle of wine, a ripe cheese, and a good loaf of bread—all of which, it should be noted, can be acquired locally.

For the loin:
Preheat oven to 350 degrees. If you haven’t asked your butcher to butterfly the tenderloin for you, slice the loin lengthwise halfway through, open the two flaps like a book, and pound them flat with a meat tenderizer so the whole tenderloin is more or less of the same thickness.

For the cranberry and chorizo stuffing:
1 In a large heavy pan, sauté the sausage and drain off excess fat. Over medium heat add onion, the three peppers, garlic, cumin, and cranberries. Cook until the onions are translucent but not browned. Add crushed tortillas, chicken broth, and tomato paste. Cook for 1 minute. Add all fresh herbs. Remove from the heat.

2 Place the stuffing in the middle of the pork tenderloin. Roll the tenderloin around the stuffing, then tie the roll with loops of butcher’s twine.

3 Heat a sauté pan on high with 2 tablespoons of oil. Sear the outside of the pork tenderloin until golden brown.

4 Place in the preheated oven for 15 minutes, slice, and serve. (At Havana, we garnish this with a bright, wilted green like spinach or chard and accompany it with wasabi mashed potatoes.)