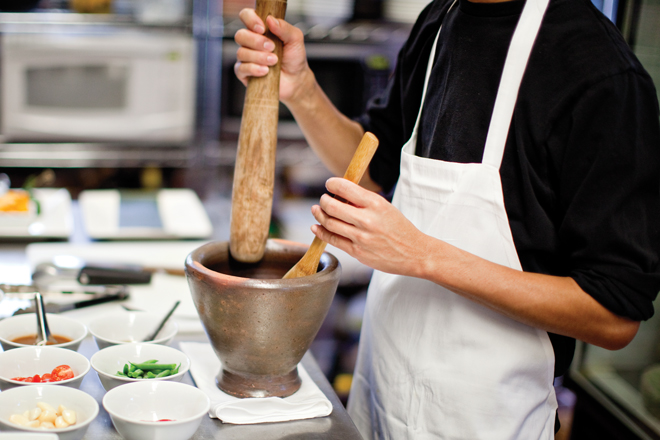 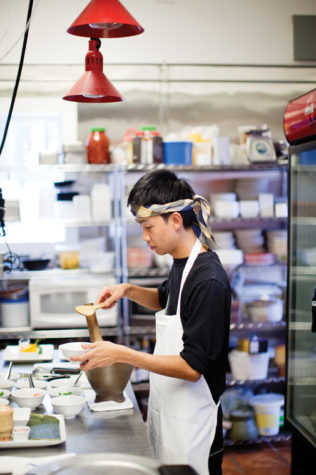 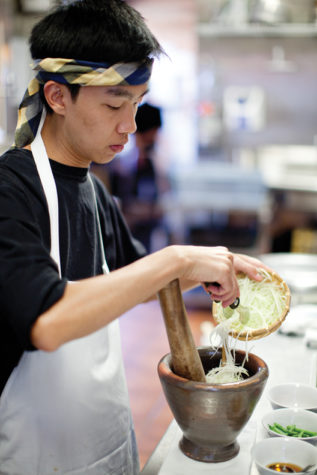 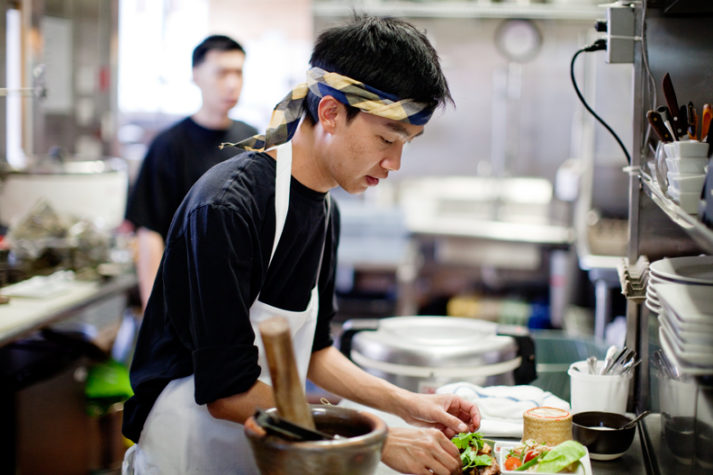 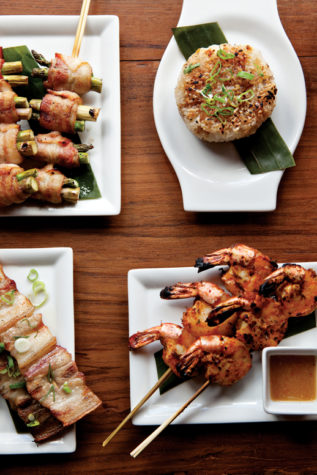 An assortment of dishes from the grill: asparagus wrapped in bacon, Thai sticky rice, pork belly skewers, and shrimp skewers. 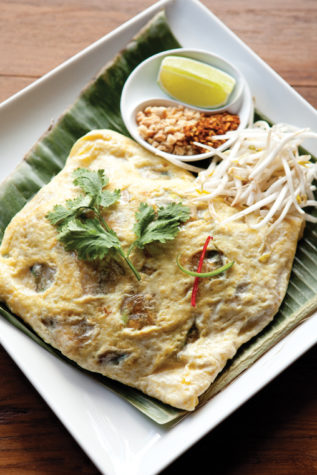 The one-of-a-kind pad thai, wrapped in an omelet with traditional accoutrements. 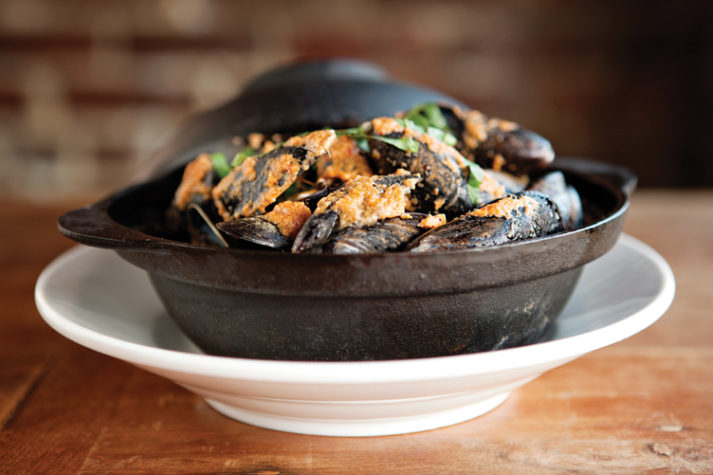 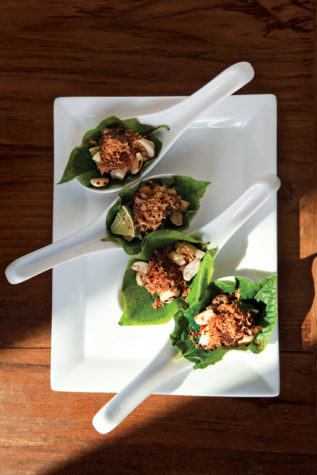 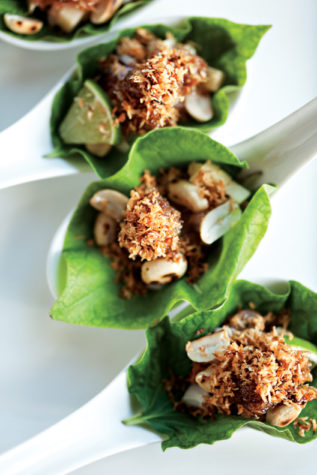 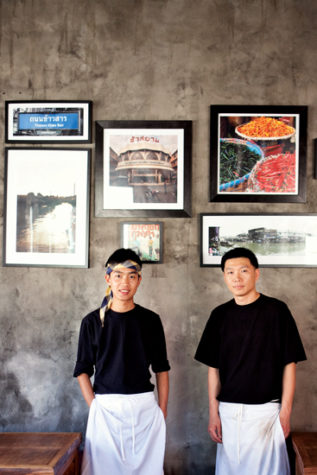 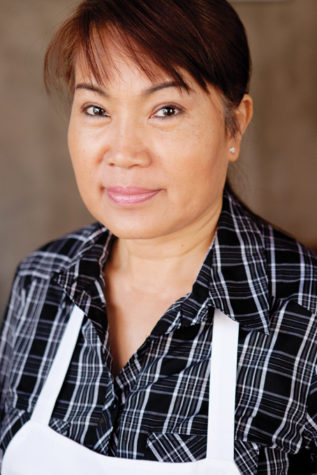 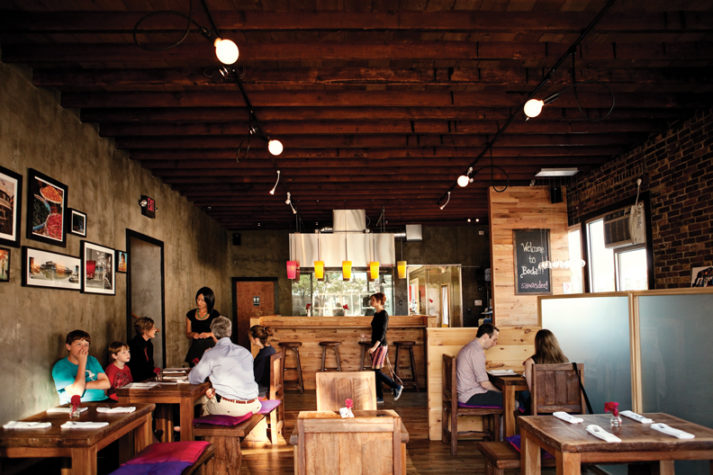 Early evening light is cast over the warm wooden surfaces of the dining room.

What was once a restaurant focused on traditional cuisine and takeout orders is now the hip and hospitable Boda—Portland’s first destination Thai restaurant.

Located across the street from Longfellow Square and next to Joe’s Smoke Shop on Congress Street in Portland, Boda draws in a sundry crowd of artists, students, musicians, and chefs, not to mention a devoted Thai population—a testament to the authenticity of the food.

For six years, Danai Sriprasert and Nattasak Wongsaichua, nicknamed Dan and Bob by the staff (so they don’t butcher the pronunciation of their real names), ran Bangkok Thai, a restaurant that subsisted primarily on takeout orders. A few years later, they opened the Green Elephant down the street, a staple restaurant for vegetarians. As the city of Portland gradually reinvented itself as a culinary destination, so too did Bangkok Thai, creating a restaurant for people would want to stay longer than the time it takes to whip up an order. In February of this year, they reopened under the name Boda (a combination of the owner’s nicknames) and have met with tremendous success.

Although the square footage of the space remained the same, the elements that make up a restaurant were entirely reconceived and redesigned. They brought in wooden tables made from reclaimed wood from Thailand and brightly colored cushions made by Thai seamstresses. They hired a front-of-house staff that eased the translation between the kitchen and the dining room, the star of which is Katie Boone, the general manager. They restructured the kitchen, adding a long grill for cooking skewered meat and fish that was inspired by the world-renowned street food of Thailand. Both protégés of their mother’s home cooking, they rewrote the menu, staying true to home-style country cooking and traditional flavors, while playing with visual presentation. For example, the pad thai has all of its typical components: rice noodles, bean sprouts, chives, peanuts, lime, etc., but it’s wrapped in an impressively thin omelet. They also changed their hours of operation to accommodate late-night diners, many of whom are chefs.

Dan is responsible for redesigning the restaurant, which feels a bit like an extension of a home kitchen in which one smells the food cooking and hungrily anticipates what will be brought to the table. The restaurant is divided visually by its surfaces. The dining room is warm and predominately wooden with red brick walls. Colorful photos have been hung around the space depicting markets in Thailand, ingredients, and exotic landscapes. The grill room, which is the only part of the kitchen exposed to the dining room, has poured-concrete floors the color of steel and gray stucco walls that give the space an industrial feel. The primary kitchen is tucked behind an open doorway, allowing the smells of crushed lemongrass, garlic sauteing in sesame oil, and fresh chopped scallions to waft through the restaurant.

Boone, a young and charming hostess, has worked under Dan and Bob’s management for several years and speaks glowingly about them as chefs and owners. She has a true understanding of the food, its cultural context, and the preparation and presentation of each dish. She was kind enough to walk us first through the cocktail list and menu.
The cocktails are tall and sugar laden, with traditional favorites like the  Mai “Thai” and Singapore Sling served alongside creative concoctions such as the Amethyst Lemonade, made with Stoli Razberi vodka, homemade lemonade, and Chambord;  the Thai Tea Margarita, an infusion of homemade Thai tea, tequila, Cointreau, and lime juice. They offer a Rogue Morimoto Soba beer that pairs exceptionally well with most things on the menu.

We started off with the miang kum som-oh, a palmelo salad on betel leaves that are cupped in individual soup spoons and intended to be eaten in one complex bite. Then we had crispy quail eggs served in a copper escargot plate with a touch of spicy sauce dampening each. The Price Edward Island mussels are served swimming in a bath of curry broth alongside a sweet little straw basket of sticky rice for soaking up the broth once the mussels have been devoured. I have to say, the first spoonful of sticky rice saturated with sweet coconut curry was perhaps my favorite bite of the evening. Next were the beef skewers from the grill, well seasoned and perfectly charred on the outside, tender and rare on the inside. They needed no dipping sauce. We also had the tilapia with herbs in banana leaf, served with cucumber soup. The fish had a gentle, well-rounded spice to it, and never would I have imagined that warm cucumber broth could be so comforting. The beef panag was made with organic Wolf’s Neck Farm beef, sliced with precision and cooked slowly in coconut cream with lime leaves. The pork hocs braised with star anise was the most memorable of dishes. There was no masking what it was, as some chefs do to please the customer. The pig’s feet were braised, on the bone, until falling apart, and then arranged on the plate simply alongside a hard-boiled egg, pickles, and mustard greens. Good honest country cooking. We finished with the Thai tea ice cream with coconut rice and condensed milk, which I realized I had room for the minute I took the first bite. From start to finish, the meal was lovely and grounded.

When I asked Boone about her colorful apron, she said that Bob’s mother sewed them for all the wait staff and that she was actually in the kitchen as we spoke, helping with the evening meal. Boone spoke of the chefs with gratitude and pride, and it seemed evident that graciousness and hospitality are the cornerstone of Boda’s success. And then of course, there’s the food.