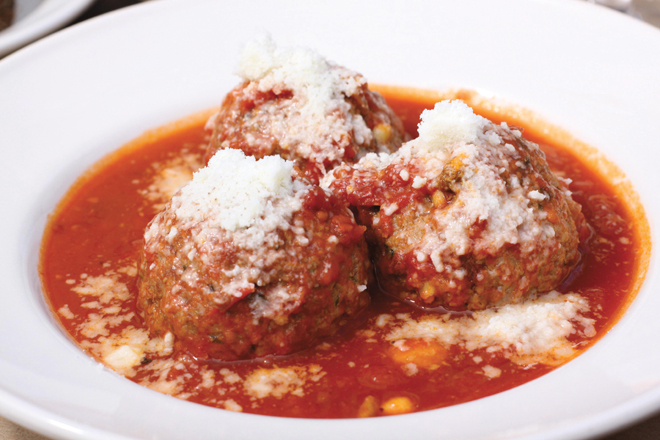 The Frankies Spuntino Kitchen Companion & Cooking Manual reveals the simple magic behind the food that has set a new precedent for Italian cuisine in New York City.

They looked a little out of their element. Portland, after all, is a good six hours from Brooklyn, New York, the place where Frank Falcinelli and Frank Castronovo own and operate wildly successful Italian restaurants. They are affectionately referred to as “the Frankies” by those of us in the business and are easily recognized on the streets of Brooklyn by their thick beards and even thicker accents straight out of the borough.

Childhood friends, the Frankies reconnected when Falcinelli ran into Castronovo outside his village apartment while considering potential business partners for his new restaurant. Castronovo had been pulled over by the NYPD for small crimes not worth mentioning. This fortuitous encounter led them to open Frankies Spuntino in 2004 on Court Street in Carroll Gardens, a historically Italian neighborhood. The restaurant was simple in character, and the food inspired by their grandmothers’ cooking. In 2009, they opened Prime Meats, which was inspired by a few trips to Germany and some damn good sausage. There, some of New York City’s finest bartenders mix up Prohibition-style cocktails wearing three-piece suits and a twinkle in their eye. Trying to get a table at any of their restaurants can take up to two hours, but it’s always worth the wait.

Their new cookbook, The Frankies Spuntino Kitchen Companion & Cooking Manual, published by Artisan and written by the Frankies and Peter Meehan, was the impetus for their trip to Portland, an opportunity to promote their book and investigate Portland as a potential location for their expanding restaurant empire. When a native Mainer asked them what they hope to leave as their legacy, Castronovo said, “I want to do for cuisine what the Grateful Dead did for music.” The crowd paused for a moment of cogitation and then we moved on to the next question. Apparently, the Frankies have been Dead fans their entire lives.

I had to laugh when we went to a bar later that night and the two of them, both in their forties, couldn’t get past the bouncer because they didn’t have their IDs. It then occurred to me that they live in a city where no one needs a driver’s license and everyone knows who they are. You can take the boys out of Brooklyn, but you can’t take Brooklyn out of the boys.

Preparation:
1) Heat the oven to 325 degrees. Put the fresh bread in a bowl, cover it with water, and let it soak for a minute or so. Pour off the water and wring out the bread, then crumble and tear it into tiny pieces.

2) Combine the bread with all the remaining ingredients except the tomato sauce in a medium mixing bowl, adding them in the order they are listed. Add the dried bread crumbs last to adjust the wetness: the mixture should be moist wet, not sloppy wet.

3) Shape the meat mixture into handball-sized meatballs and space them evenly on a baking sheet. Bake for 25 to 30 minutes. The meatballs will be firm but still juicy and gently yielding when they’re cooked through. (At this point, you can cool the meatballs

and hold them in the refrigerator for as long as a couple of days or freeze them for the future.)

4) Meanwhile, heat the tomato sauce in a sauté pan large enough to accommodate the meatballs comfortably.

Dump the meatballs into the pan of sauce and nudge the heat up ever so slightly. Simmer the meatballs for half an hour or so (this isn’t one of those cases where longer is better) so they can soak up some sauce. Keep them there until it’s time to eat.

5) Serve the meatballs three to a person in a healthy helping of the red sauce, and hit everybody’s portion—never the pan—with a fluffy mountain of grated cheese. Reserve the leftover tomato sauce.