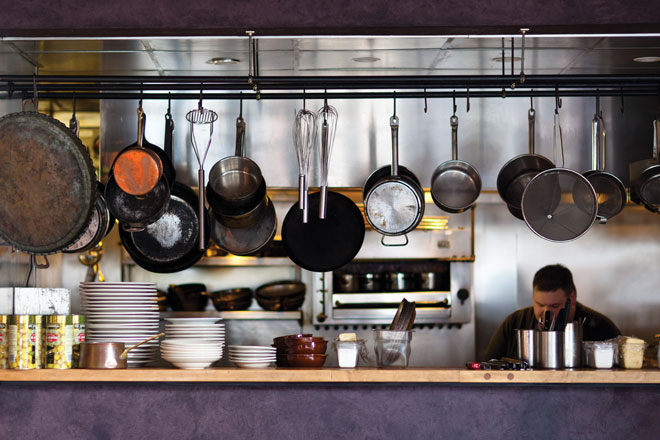 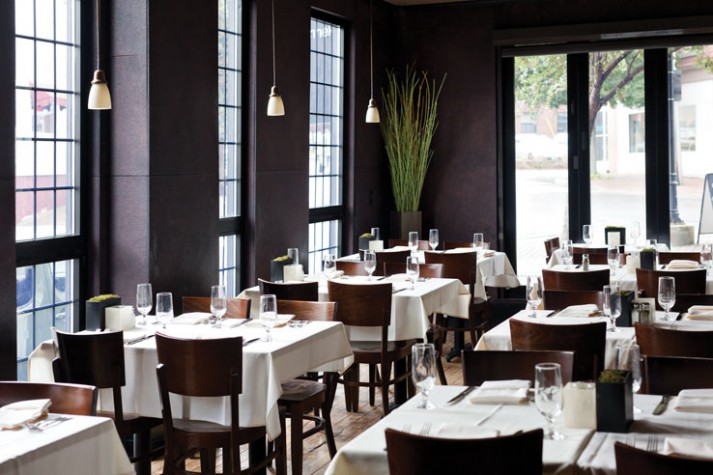 The dining room is elegant without being stuffy. 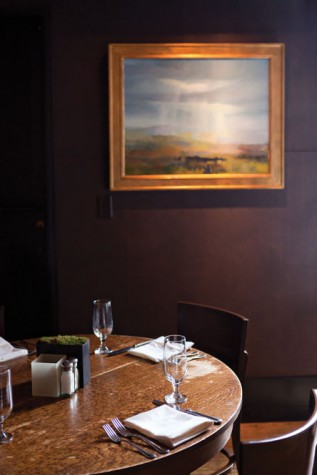 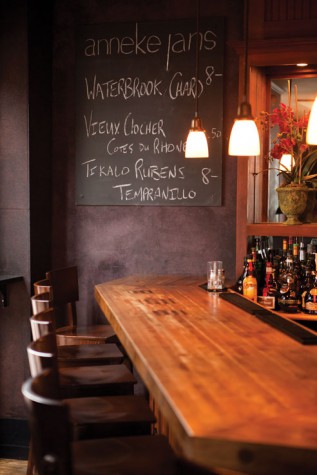 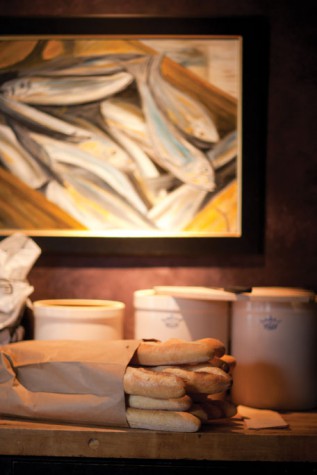 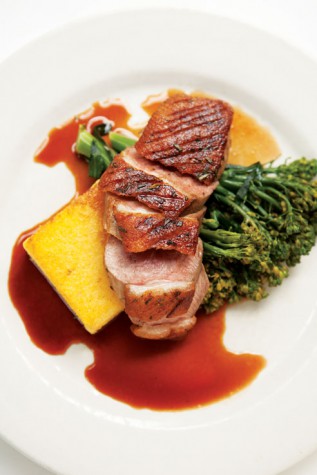 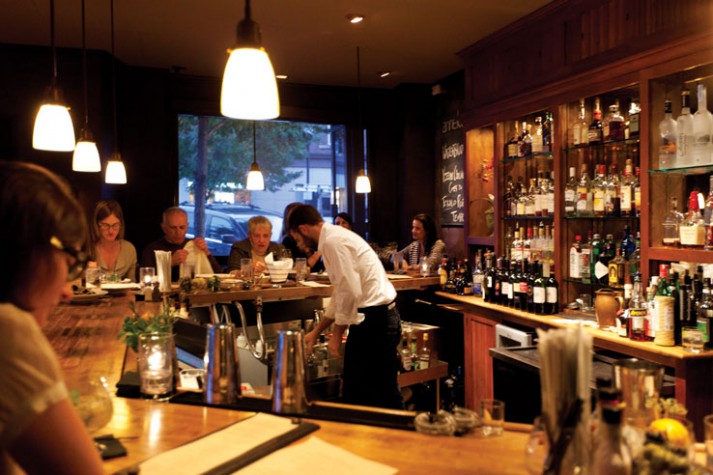 At the bar, guests can converse with folks across the way while watching the bartender shake up custom-designed drinks. 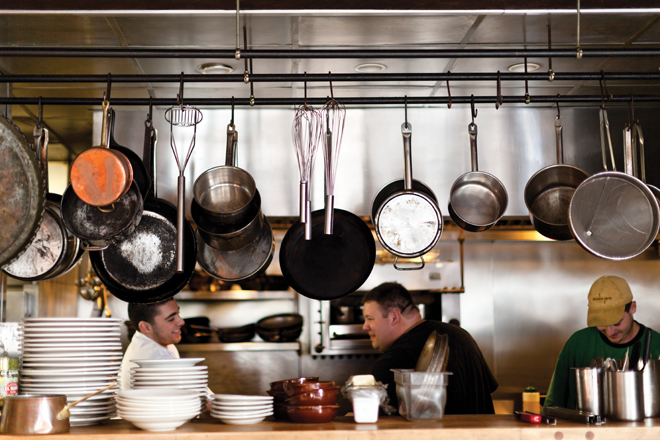 A veil of pots and pans hangs between the harsh noises of the kitchen and conversations in the dining room. 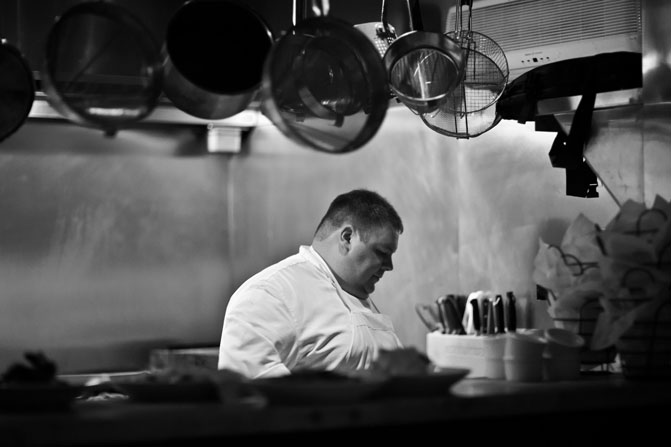 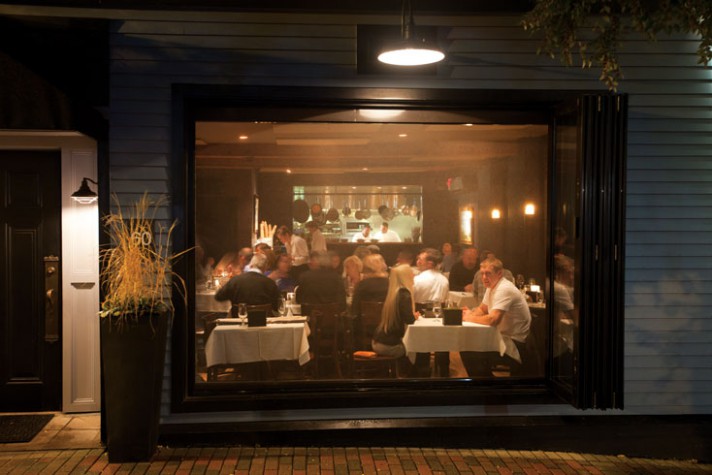 A view from the street: The restaurant is bustling seven nights a week. 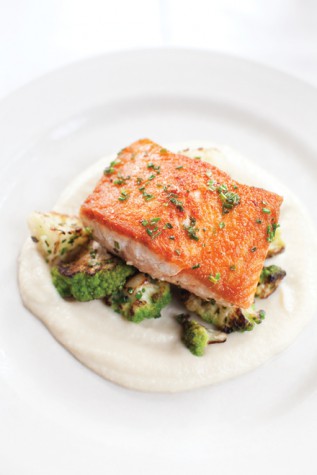 A fine example of how simply cooked, high-quality ingredients make the perfect entree. 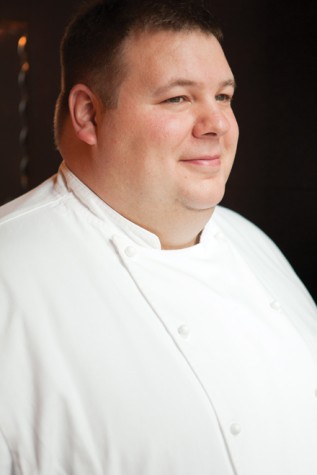 Charlie Cicero takes pride in his work, running the kitchen at Anneke Jans with confidence and a smile. 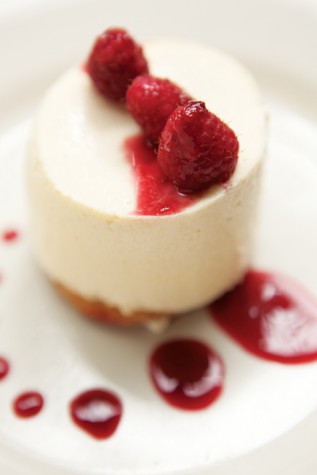 Cheesecake with raspberry sauce and fresh raspberries is a good way to finish off a meal. 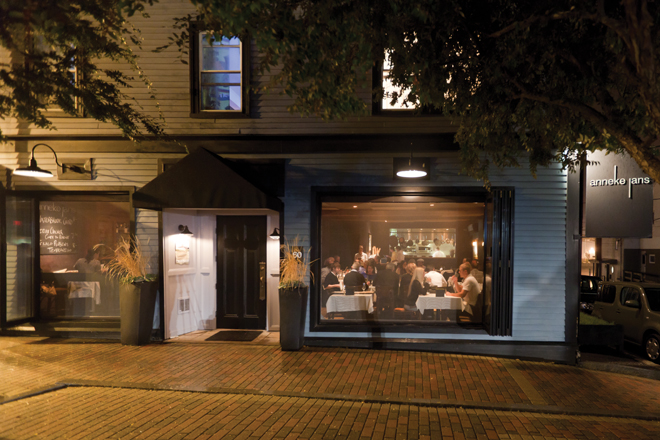 The atmosphere is inviting even from the street.

Equipped with a practiced staff, a fine selection of booze, gracefully prepared food, and a cozy atmosphere, Anneke Jans in Kittery is the kind of establishment that every town in Maine needs—especially in the dead of winter.

Because I had never been to Kittery, it was a challenge navigating my way to the old port section of town, the location of Anneke Jans. Although it is only six years old, the restaurant has become a local institution. On entering, I was greeted by a rather stout, dramatic fellow, his voice booming, his words intently pronounced. He pointed out that I was the first guest of the evening and had my pick of seats. The bar was dimly lit and carefully crafted of dark wood—and when it comes to drinking and eating alone, there is no better setting. The restaurant smelled of roasting meats, vegetables, and aging wood. It felt warm and balanced, the kind of space that draws you in and makes it hard to leave at the end of the night.

The man tending bar was properly set up and ready to make me a drink. In addition to a list of classic cocktails, such as an Old Fashioned and a Sidecar, there were a dozen or so fresh ingredients that could be incorporated into custom-made drinks. Concord grapes, Asian pears, fresh tarragon and thyme, homemade grenadine, and almond syrup were all elegantly displayed across the bar, tempting beer drinkers to try a cocktail. I told the bartender I favored bourbon and he took it from there. As he was concocting my jockey full of bourbon, made with Eagle Rare, mint, sugar, and muddled lemons, an older couple walked through the front door, looking for a familiar face. They were clearly regulars, and as they headed toward the bar, the good-humored host said, “You have to be twenty-one to sit at the bar, folks.” As they got situated, I was flagged toward the kitchen for a one-on-one with the chef. Anyone who’s worked in this business knows that, once service begins, there are no bathroom breaks, phone calls, or conversations about anything other than orders in and orders out. Thankfully, no orders had yet been taken.

The chef, Charlie Cicero, stood at attention in the kitchen, behind a counter that opened into the dining room and offered up the sounds and smells of the galley to those feasting. I peered over the expediting counter and fired off questions as quickly as I could. In about five minutes, I learned that Cicero had never been chef de cuisine of his own restaurant. He worked for a number of years at a high-end seafood restaurant in Winchester, Massachusetts, but this was his first gig running the kitchen. He changes the menu throughout the year, but certain items have remained unchanged since the restaurant’s debut, namely the liver with caramelized onions and bacon, the Bang’s Island mussels with blue cheese, and the steak frites. And for good reason: they are guilty pleasures whose removal would surely disappoint those expecting them.

Cicero’s home is in Hudson, New Hampshire, making his commute one hour each way. When asked what he thinks about on his way to and from work, he didn’t hesitate to respond: “Barbecue.” “I’ve got a friend who’s a chef in Massachusetts and we get off at about the same time. We talk about barbecue 90 percent of the time.” The two recently won the Massachusetts State BBQ Championship and are headed down to Kansas to compete in the World Series of Barbecue. Cicero has two daughters, Morgan, who is eight, and Sophia, who is four. The girls have embraced their father’s love for food. When asked if she wanted chicken liver and eggs at a holiday brunch, Morgan asked for “no eggs—just a bowl full of chicken livers.” Sophia is more of a meat-and-potatoes kind of girl. Cicero’s wife, Tricia Cicero, is known for her one-pot meals.

After the first order went in, I scooted back to the bar. The kitchen sent out a procession of menu items. First was the butternut squash and apple soup with a teaspoon of crème fraîche, followed by the calves liver, which was gently battered, fried, and served with North Country Smokehouse bacon. Next were the Bang’s Island mussels with shallots, white wine, cream, and a generous amount of Great Hill blue cheese on top—a combination that took me by surprise. The bartender then served up the duck breast, cooked precisely to medium rare, followed by the golden-crusted salmon, which was moist throughout.

By the fourth course, the elder gentleman and his wife beside me looked over with such curiosity that I felt the need to explain to them that I was reviewing the restaurant, hence the gluttonous menu. They seemed pleased to be witness to the feast and told me that they had lived in the area for a number of years and had worked at the Portsmouth Naval Shipyard in Kittery. He proudly mentioned that his wife was the first woman to work as an engineer technician at the shipyard. Apparently, they reserve dinner at Anneke Jans for special occasions.

Before the dessert appeared, the owners, Donna Ryan and Andy Livingston, joined me at the bar and explained the history of the restaurant. They named it after a widowed land owner in New York City in the 1700s who is believed to be a relative of the Livingstons. A portrait of Anneke Jans was hung beside the entrance for all to see. Ryan explained that the restaurant, formerly an antique shop, had to be gutted before they built it out. She designed the interior of the space, which is both rustic and elegant, with exposed beams and original floors. Neither of them had a background in the service business, which in no way seemed to hinder their hospitality. “The staff runs the restaurant,” said Ryan. “They’re responsible for its success—they’re the professionals.”

The bartender reached over and set down a magnificent-looking bread pudding. The gentleman to my left leaned in and nudged me. “It’s the best,” he said. I took a spoonful and immediately went back for a second. After the eighth or ninth bite, I was sated. The dining room was filled with happy customers and a warm atmosphere. I closed my notebook, slipped it into my purse, and leaned back into my bar stool, contented. If it hadn’t been for the long drive home, I would have stayed for another drink.