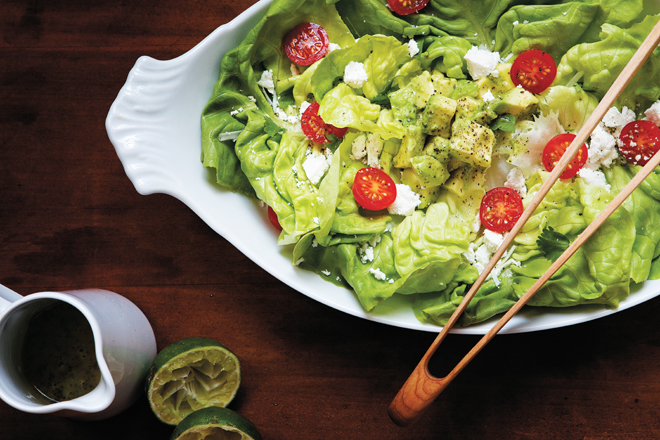 For Ronni Hass, a dinner party is a work of art. She pays careful attention to every detail—from the artfully selected menu items to the beautifully constructed tablescapes.

When we first spoke, Hass told me that she was throwing a party for a dear friend who had always wanted to be a lounge singer. For the evening’s affair, she had readied a boa, dimmers on the lights for atmosphere, and a karaoke machine so that her friend could be a star for the night. She had an elegant antipasti bar in mind and some carefully chosen wines that would surely loosen up the vocal cords. Hass is an entertainer, and her home and the food she prepares are a reflection of her values.

Hass splits her time between Needham, Massachusetts, and Cape Porpoise. Her home in Maine is made of salvaged wood, emphasized by the white walls and carpets. It is orderly, clean, and comfortable.

Like many self-taught chefs, Hass’s parents— her father, in particular—strongly influenced her desire to feed and entertain people. “My father could tell you where the best Chinese restaurant was in just about any city,” she says. He traveled internationally and told her about every bite that went into his mouth during his journeys. She was also inspired by her childhood in Manhattan, where Indian and Asian foods are as common as American-style cuisine. When she was younger, Hass read cookbooks as though they were novels, and she proudly mentions that she held her first dinner party at the age of fifteen, where she served homemade tacos before an Allman Brothers Band concert.

Hass went to college in Boulder, Colorado, where—when she wasn’t skiing—she ran a “party tips hotline” that brought in $200 a week. She then headed back to her home, New York City, to study sales and marketing, which proved to be useful knowledge later in life. She met her husband at a punk-rock show in the city, and the two of them moved north to start a life together.

While in search of a home in Brookline, Massachusetts, a friend of Hass’s suggested that they spend a day at the beach. It wasn’t until they crossed the state line that Hass realized that they were headed to Maine. After a day at the idyllic Goose Rocks Beach, Hass convinced her husband to buy a second home before they even bought a first. “As corny as it sounds, Maine truly is the way life should be,” Hass says with a smile. “I’ve raised my children here in the summertime. All they need is a towel, a bicycle, and sunscreen, and they’re happy until dinnertime.”

While living in Brookline, Hass joined the Culinary Guild of New England, an organization that was founded thirty-five years ago by a number of professional female chefs and consulting members, one of whom was Julia Child. Today the organization is a food-enthusiast cooperative made up of both professionals and amateurs. Hass runs an affiliated supper club once a month at some of the best restaurants in the greater Boston area.

When asked how she manages to host and participate in her own parties, she explains that over the years she has worked out a system that enables her to get the essential work done while also having a drink and a good time. Toward the end of our interview, there is a moment of silence, and I can tell she wants to express something. “Entertaining is what fills me up. I get to be with friends and family.”