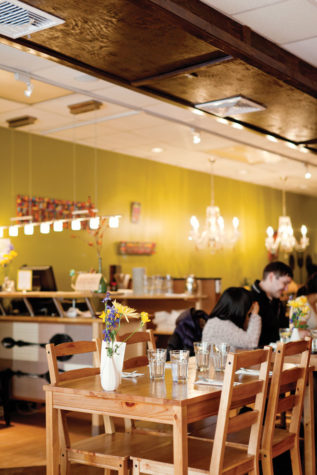 Bright and welcoming decor sets the tone at Green Elephant. 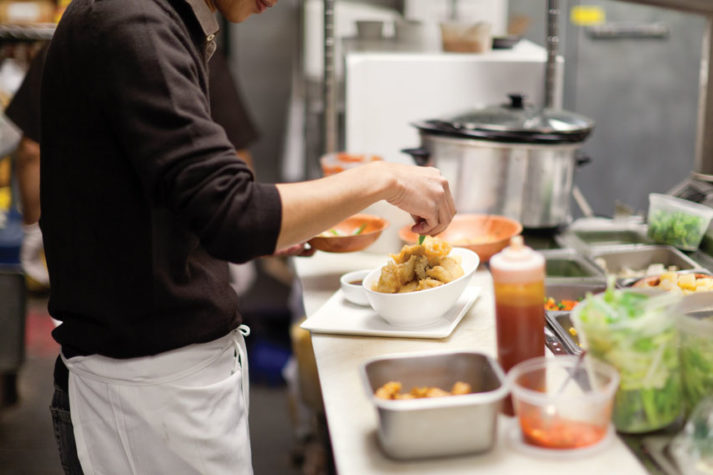 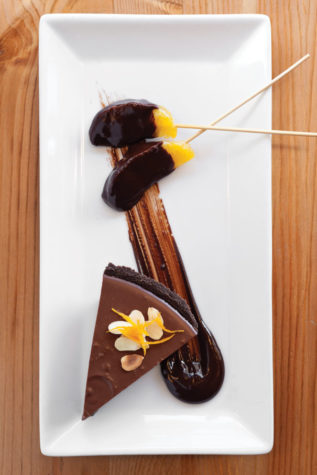 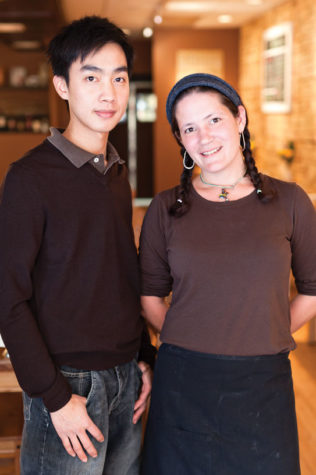 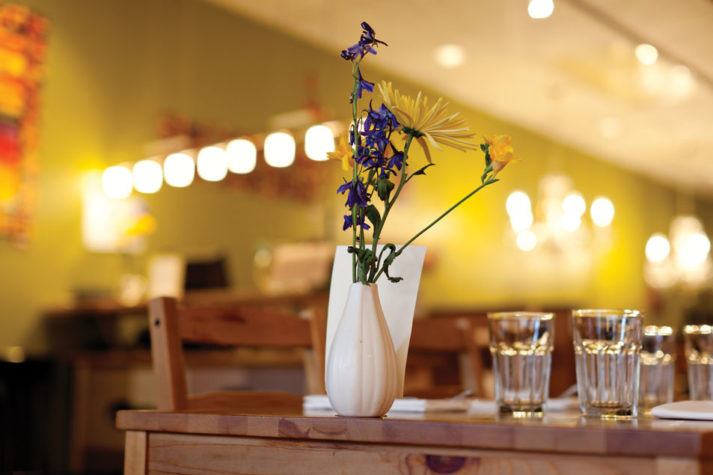 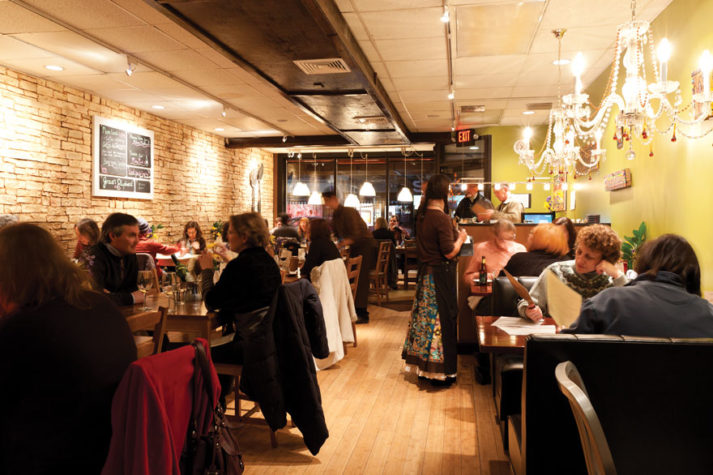 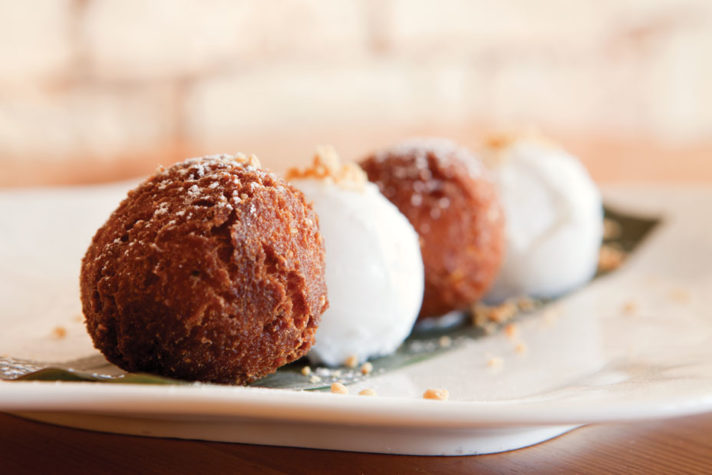 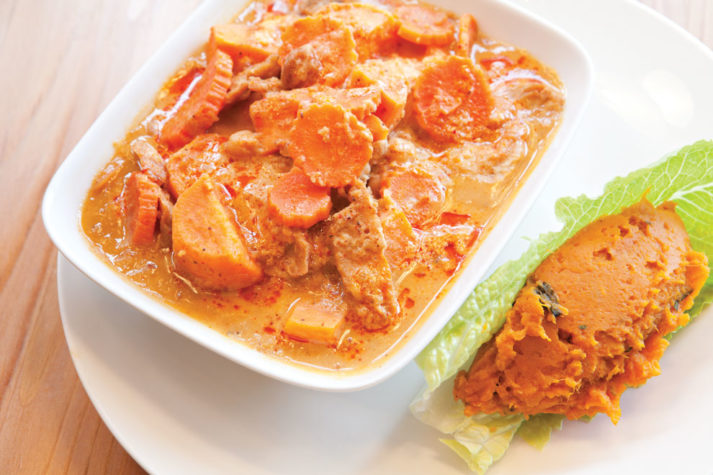 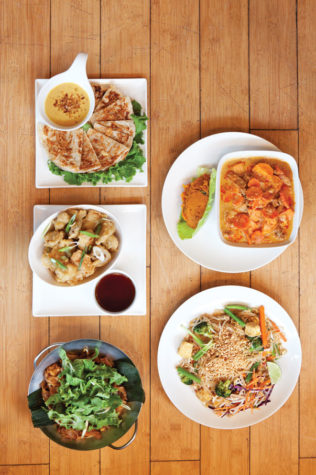 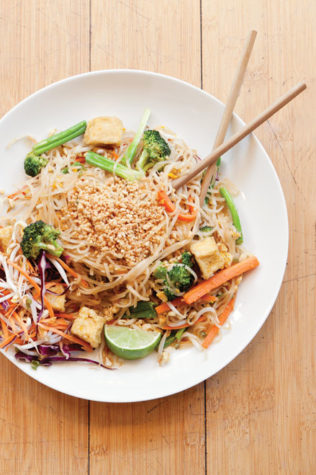 Despite enjoying a very good meal at Green Elephant shortly after the restaurant opened, the label “vegetarian bistro” always seemed to keep me away. I’m actually a big fan of vegetarian food (or any food for that matter), but knowing that the comforting embrace of meat would be nowhere to be found, were I to cry out for it in the middle of my dining experience, was somehow a source of anxiety for me.

Now, after years spent wandering the darkness of my inner irrationality, I return to Green Elephant for dinner. I’m being dramatic, of course, since I’m actually quite optimistic that I’ll enjoy my experience thoroughly. Although the menu is influenced by a multitude of Asian cultures—Thai, Vietnamese, Indian, Chinese, Malaysian, and Japanese—there is no lack of culinary coherence or harmonious flavor complements.

The menu items containing soy meat, such as the Far East Duck and Veggie Citrus Spare Ribs, are an immediate source of curiosity to me. According to Danai “Dan” Sriprasert, the chef and co-owner, Green Elephant’s style of food was developed in Thailand, where a large percentage of the population are Buddhist and refrain from eating meat. Their devotion, however, doesn’t stop them from craving it, and soy-based faux-meat products have become an acceptable alternative. I personally find the texture quite pleasing, although I learned from restaurant manager Corin Gintner that my reckless use of the term “fake meat” is frowned upon (though I can’t understand why) and that “soy meat” is the preferred nomenclature.

The restaurant’s wine list comprises sixteen thoughtfully chosen bottles, with all but two available by the glass. Each has a brief description of its flavor profile, a rarely found but quite useful guide for choosing wines that pair well with your food. The beer selection spans a range of styles to suit any palate, with an emphasis on interesting rather than generic. Additionally, the status of each dish—whether it’s vegan, gluten-free, sulfite-free, or organic—is clearly labeled on the menu. It turns out that Chimay, a Trappist ale from Belgium, is vegan, which is extremely useful knowledge should I ever choose that path. There is also a reasonable array of nonalcoholic drinks available, including Vietnamese coffee with condensed milk, which tastes mighty fine to me.

My dining companion and I elect to begin with the Roti Canai, an Indian-style flatbread served with a vegetable-curry dipping sauce that is so wonderful it disappears in no time. This makes way for the next course: tempura-fried king oyster mushrooms. The batter on these is light, airy, and perfectly seasoned. Concluding this Tet Offensive of appetizers is the fragrant coconut soup with tofu and baby bella mushrooms. This proves to be an excellent vegetarian interpretation of tom kha gai, a soup traditionally made with chicken that is frequently found on the menus of Thai restaurants.

Sriprasert’s mother, who owned a restaurant in Thailand, taught him how to cook from a very early age. Each morning, he would wake up and be put to task peeling garlic, chopping onions, making curry paste, and executing other tedious preparations. His mother never used written recipes, and by cooking alongside her he began to develop his own personal style. These experiences gave him the knowledge and skills that allow him to transition seamlessly between the many different types of cuisine featured at Green Elephant. Char Guay Teow, a dish of wide noodles prepared with egg, red-chili paste, tofu, and soy ham, is the first of our entrees to arrive. I find the textural interplay of the soft, chewy noodles and crunchy greens quite pleasing. My companion’s Spicy Vegetable Medley Stir-fry with peanuts, soy meat, and spicy red-curry paste is also an elegantly executed dish. Although we are completely full of veggies at this point, dessert is inevitable, and we finish up with fried bananas and coconut ice cream. Ain’t nothin’ wrong with that!

It’s easy to determine when a house staff is happy. I get that vibe immediately on entering Green Elephant—the servers not only perform their jobs proficiently but also make you feel genuinely welcome. According to Gintner, who has spent twenty years working in restaurants, this unassuming vegetarian bistro is the most organized and coordinated working environment she’s ever encountered. Even amid the chaos of a busy night, everything flows smoothly. Customers waiting for tables are provided with pagers, allowing them to wander as far away as the Portland Museum of Art or—one of my preferred time-killing destinations—the nearby Downtown Lounge.

Moving into their fourth year of operation as the only fully vegetarian dining option in the greater Portland area, Green Elephant continues to be a destination for those who not only like their vegetables, but like them cooked with some style and international flavor. And if you happen to be dating or married to a vegetarian, it’s one place that you can always agree on, even if you continue to argue about those Fakin’ Bacon tempeh strips in your freezer.]]>