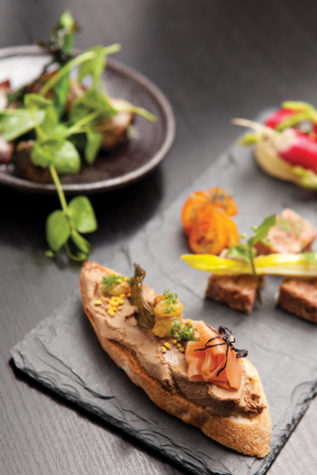 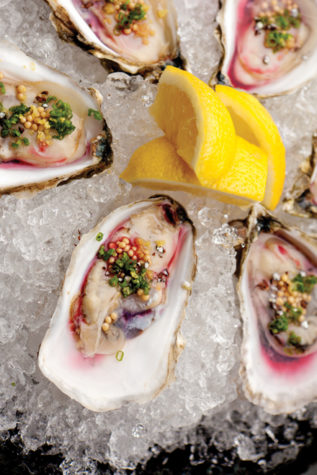 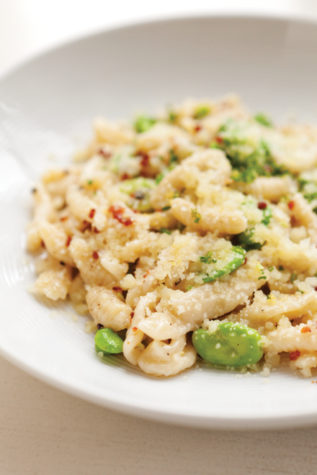 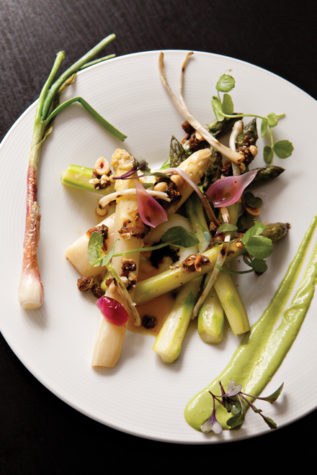 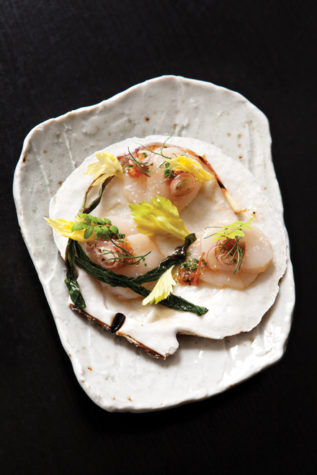 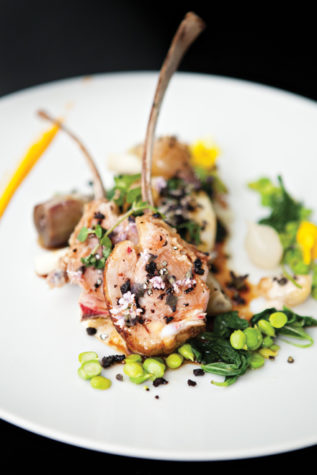 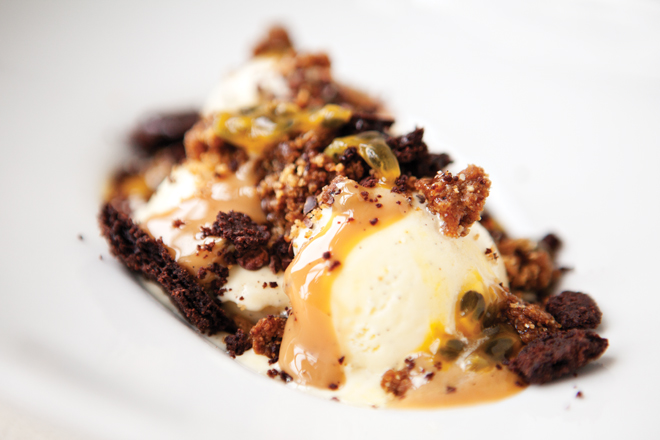 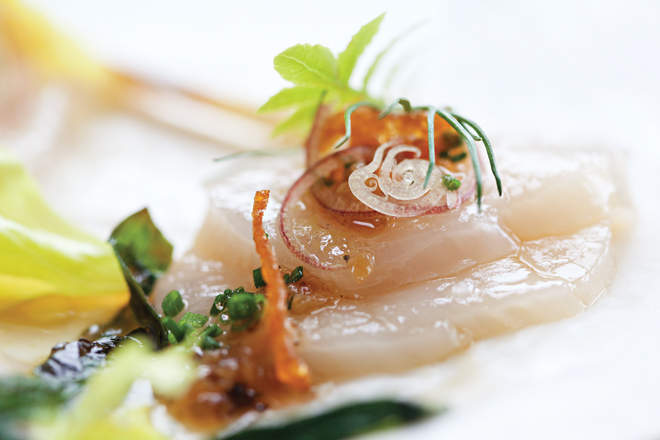 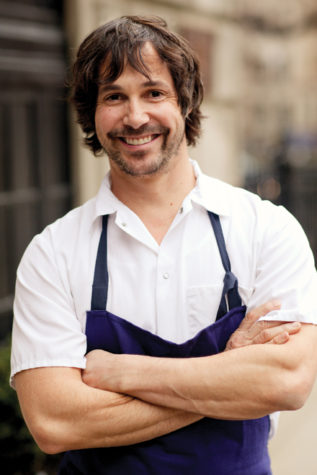 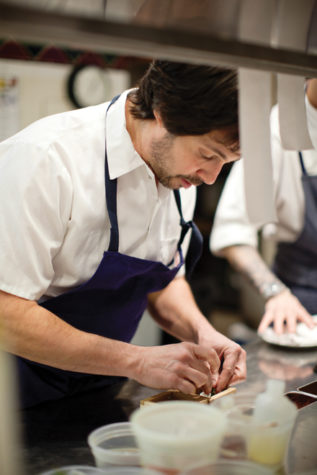 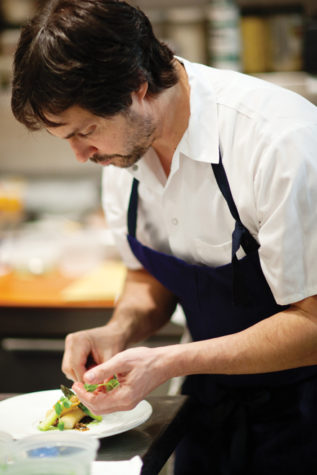 With six successful restaurants under his belt, a James Beard award in hand, and a second child on the way, one might be curious why chef Ken Oringer selected Maine for his first culinary venture outside of Boston.

According to his friend and new business partner Tim Harrington, “He wasn’t busy enough.” The new restaurant, called Earth, will showcase both the gorgeous natural surroundings and garden- grown foods at Harrington’s Kennebunkport destination, Hidden Pond.

The three of us recently met at Clio, Oringer’s French-American restaurant that shares a space with his Japanese hotspot, Uni. Over a few glasses of Sancerre and plates of sashimi, we discussed Oringer’s connection to Maine.

Oringer has to admit that, after living everywhere from Bangkok to Los Angeles to New York to South Beach, there was a time when he would have been skeptical, to say the least, if someone suggested Maine as a viable location for creative culinary entrepreneurialism. But after getting to know Tim over the years, and witnessing his commitment and integrity firsthand, the choice became an easy one.

Harrington recalls how the concept for Earth was first conceived. “Ken would come up to Hidden Pond to visit, spending hours in the garden unearthing items we had no idea we were growing—like lemongrass— and heading into the kitchen with them. I knew the one problem with Hidden Pond was that once people get here they don’t want to leave, but they need to eat, and it made me start thinking that Ken should do this more often.”

As Oringer sees it, “Any chef would be crazy not to want to do it, especially with the short season and proximity to Boston”—a city from which he hopes to draw a significant percentage of his clientele.

Earth will be located at Hidden Pond, and will complete the equation of what Harrington lightheartedly refers to as “The Ritz Carleton of summer camps.”

“We’re very excited to be a part of what’s going on in Kennebunkport, and we’re feeling very welcomed in the restaurant scene,” says Harrington. “Maine is going through an amazing culinary transformation right now.”

“It’s not like New York City, Chicago, or the Hamptons, where everything is cutthroat,” Oringer adds. “Here it’s all about the community: the farmers and foragers and everyone else offers to help.”

“People talk about farm-to-table a lot,” says Harrington, “but in this case, for instance, the corn you’re eating is actually growing right near your table. When you’re eating fresh vegetables and actually smelling the garden all around you, that’s a spiritual experience.”

“There’s nothing better than seeing things grow and basing what you’re going to cook solely on that,” says Oringer. “We’re going to serve food that people like to eat in the summertime, whether you’re talking about kick-ass fried chicken or tomatoes from the garden that have just been picked and sliced and never refrigerated.”

The menu will feature a paella, one of Oringer’s signature dishes, made with up to “nine different seafoods from no more than a mile away,” as well as wood-roasted lobster with green-curry butter and razor- clam ceviche. All the pasta will be made in-house, and preparations will include cavatelli with freshly picked fava beans, pecorino, and guanciale, and stinging nettle and ricotta agnolotti.

Charcuterie will be prepared in a fashion similar to dishes served at Coppa and Toro, two of Oringer’s Boston restaurants. Freshly dug radishes with nori butter, chicken-liver mousse on toast, and wood- oven-roasted fiddleheads add yet another dimension to the ensemble of simple summer foods direct from the farm.

Even the few nonlocal products that Oringer selected have a captivating story, such as the beef Earth will serve. The farm where the cattle are raised uses a unique drainage system that helps the grass to grow back at a rapid rate and allows the animals to stay outside year- round to reach weights of more than 1,500 pounds—a rare achievement for beef cattle fed an all-grass diet. They are also raised naturally and organically, and slaughtered one at a time. The owner of the farm, who is a fan, sells his beef exclusively to Oringer’s restaurants. (I can personally vouch for the quality of the meat after having a taste of it in tataki form at Uni, and then sampling the liver and heart at Toro.)

The wine program will focus on the eclectic and off-the-beaten-path, featuring bottles such as Chateau Musar, a Lebanese producer that has built up quite a following in wine-geek circles. The cocktail list takes a nod from the dinner menu, focusing on ingredients from the garden, including lemon verbena and fresh basil. “You’ll actually watch the bartender clip the herbs he’s about to make the drinks with,” says Harrington.

Harrington and Oringer, along with the help of a few friends, collaborated on the design of the restaurant. Their goal: Bring the outside in. The building was constructed from the trees that were cut down to clear the site, and an uprooted, beautifully preserved apple tree will hang upside down from the ceiling as the dining room’s central chandelier.

Coming primarily from candles, the lighting at night will be dramatic. Earth is “all about the fire,” Tim says. Harrington’s partner, Juan Urtubey, has selected a range of world music from Brazil, France, and Africa to accompany the dining experience.

It will be a restaurant, as Harrington puts it, “unlike anything else in existence.” Where else will you be able to enjoy food of this caliber while overlooking a silvery pond next to a roaring fire pit?

In addition to Earth, Hidden Pond is adding 20 new luxury cottages to their complex, as well as a state-of-the-art events barn and a “Tree Spa” with three treetop rooms. While discussing the new project, Harrington and I come to the conclusion that we don’t like the term “resort,” since it conjures up scenes from the film Dirty Dancing. After we toss around a few ridiculous options, we laughingly settle on “boutique resort.” I recently had the opportunity to tour one of the sleek, unfinished cottages, which promises to be a perfect venue to continue the post-dinner debauchery.

Earth will be open only from mid-May to late October, because fresh local ingredients are not available in the winter season. It’s further evidence of their commitment to Earth’s mission. The excitement surrounding the opening is astounding, and I must admit that it’s also contagious.

After successfully running Spanish-, Japanese-, French-, Italian-, Mexican-, and American-style restaurants, Oringer has carved out an impressive niche for himself in Boston, and now he hopes to do the same in Maine. I ask him whether there are any cuisine styles he has yet to conquer, while suggesting the possibility of Indian, and he laughs. Then, a split second later, you can see the gears beginning to turn in his head and he starts to rattle off ideas, ranging from running a Japanese ramen house to a real down-and-dirty bistro, complete with dim lighting, lots of smoke, and steaks being cooked in the fireplace.

Whatever form his next vision takes, I’m sure he will go about it as he does everything else—the right way.