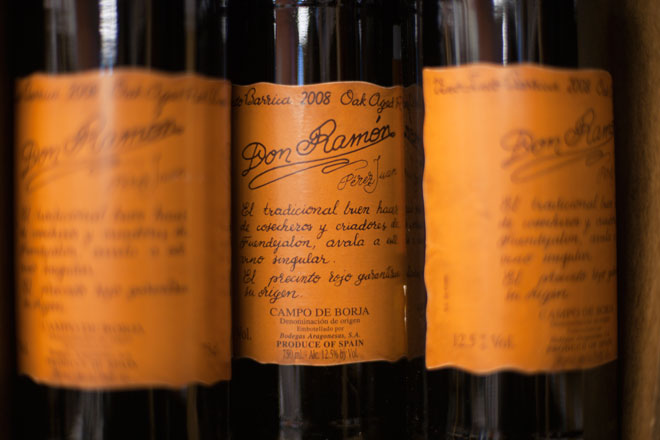 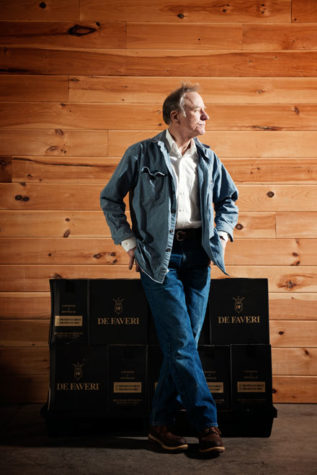 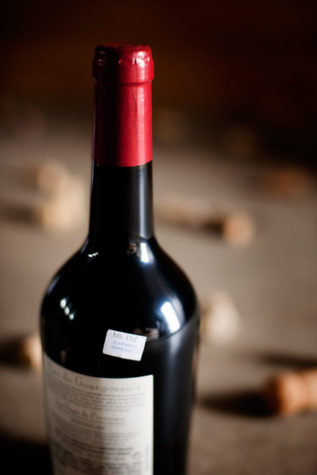 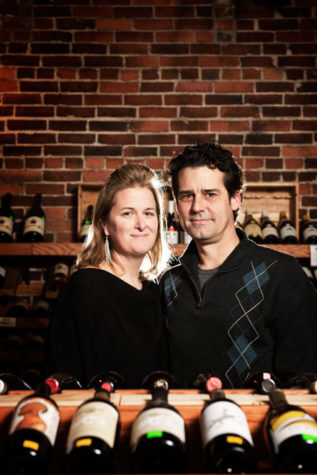 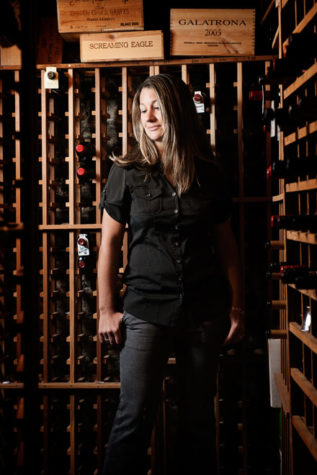 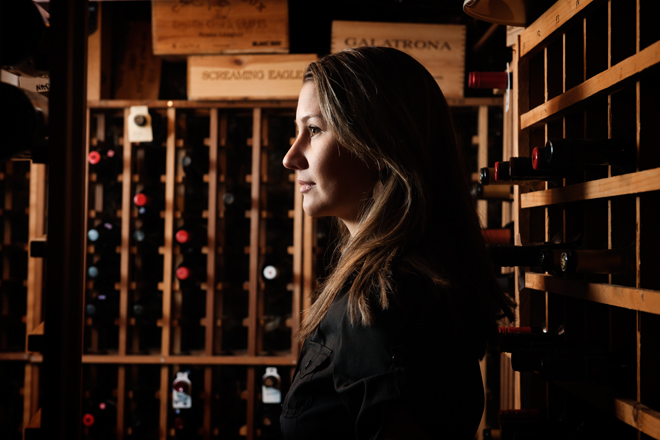 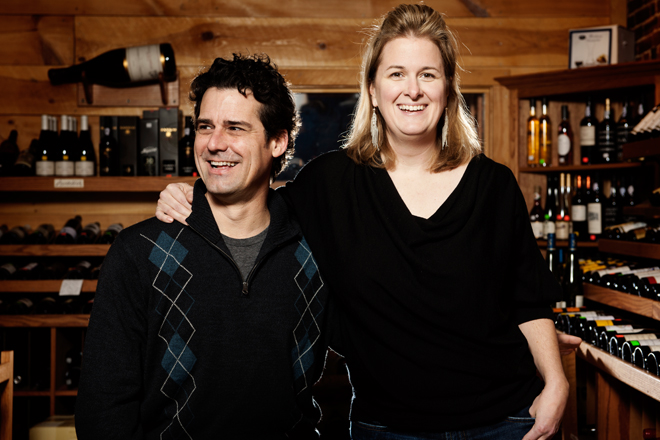 Doug + Cat of SoPo Wine co. proudly display their slogan "we won't sell it if we won't drink it" on all of their catalogs. 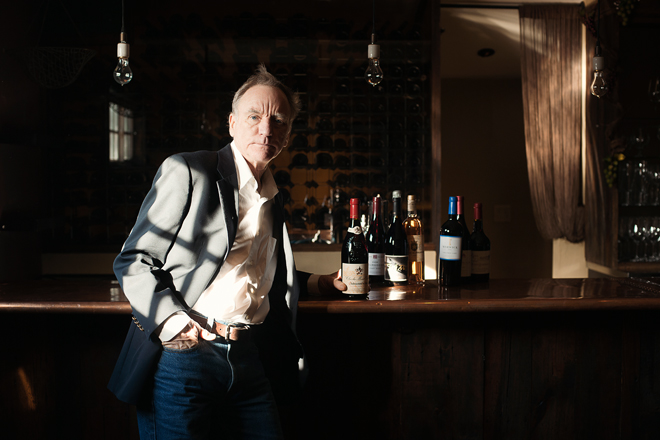 A burgeoning group of small wine-distributing companies in the state is gaining momentum every year, resulting in more personality in the selections available to Maine consumers. Find out how a hand-placed fifteen-cent redemption sticker can disclose as much about a bottle as its label.

It never fails to make me cringe when I hear people talk about buying wine based solely on packaging, as if minimalist hipster art or a back-label story about how impossibly cool the wine is or somehow the sign of a superlative bottle. Yes, I understand that this is how marketing works, but if what you care about most is the wine itself, there is a more reliable method. It’s the small redemption sticker found on every bottle sold in Maine, and it actually can tell you just as much about the contents as the label itself.

After prohibition, each state created their own arcane liquor laws. Maine opted for a three-tiered system. All beer and wine must be brought into the state by a certificate- of-approval holder, who then passes the product on to a distributor, who supplies the retail and restaurant licensee, who ultimately sells it to the customer. Maine also instituted a 15-cent deposit on all wine bottles, and responsibility for initiating the redemption fell to the distributors.

While everyone carries great wines, the larger distributors are often pressured by Goliath suppliers that shift the commercial emphasis away from the actual product to the numbers game of profit and loss. There is, however, a new generation of smaller distributors in Maine who have made it their goal to sell only wines that they themselves would happily drink. Taste, preference, and quality trump quotas and returns. Wines from these more selective distributors can be easily discovered by the redemption stickers bearing their logo, from which you can infer a great deal about the wines and the people who select them. Because these are smaller, often family-run operations, stronger personal bonds are formed with producers of similar sizes. This network creates greater availability and better promotion of smaller production wines that may easily get lost in a large catalog.

“Since most of our wines are not familiar to people, they either have to be better for the same price or cheaper for the same quality as the well-recognized brand names,” says Tim Wissemann of Mariner Beverages in Portland. “For example, there are a lot of Argentinean Malbecs available in the market right now, so before we introduce another one it had better be extraordinary.”

Tabitha Blake sold wine in Napa Valley for several years before returning home to Maine in 2008 to be closer to her family and to start Crush Distributors. She knew that her biggest asset was her connections to boutique California wineries who produce bottles previously unavailable in the state. So, while working nights waiting tables at the Back Bay Grill, she put it all on the line and started Crush. Her leap of faith was the belief that people in Maine would love her wines as much as she did.

“The selection and the wine knowledge have improved immensely in Maine over the last decade,” says Blake. “We have several wine pioneers to thank for that, and the number of independently owned shops and unique restaurants—who incorporate a true love of wine into their selections and who say no to bulk wine—have been Crush’s biggest supporters.”

While Blake was living in Napa, she became friends with her neighbor, winemaker Marc Imbert, who was involved in various consulting projects at the time. Imbert later took over his family’s winery on the Mediterranean island of Corsica, where Imbert introduced Blake to several producers he knew from the Languedoc Region in France, such as Chateau Ricardelle—now a staple in her catalog. She also plans to add Imbert’s wines, Domaine de Torraccia, to her portfolio in the near future.

When asked what the consumer should expect when purchasing wines with the Crush label, she replies, “I taste a seemingly endless stream of wines to make my selections, and my sticker is basically my stamp of approval. These wines support smaller businesses from the vineyards to the shelf—they are premium, value-driven wines from around the world.”

Doug Watts and Cat Oster started South Portland Wine Company, or SoPo Wine Co., in 2005. Their slogan—“We won’t sell it if we won’t drink it”—has been printed on their catalog from day one.

“Sometimes it’s a little hokey,” Watts says of his company’s tagline, “but when we are looking at adding a wine to our book, it’s simple, honest, and effective. We started six years ago because I needed a job, and we had moved here due to my wife’s family property in western Maine. The distributing end of the industry seemed like a natural fit, because after owning a wine company in Nashville and being in the business for many years, it’s what we both knew. We wanted to be able to sell only wine we believed in, since it’s easy to tell someone that a wine tastes good if you really believe that it does.”

From the outset, the strategy was to partially offset the cost of redemption by getting marketing value from a required task that would otherwise offer them no return on their investment: they sticker each and every bottle by hand. SoPo chose a sticker slightly larger than the norm, hoping that people would take notice. They maintain that it makes it all worthwhile when a consumer says, “I know when I see your sticker on a bottle of wine that it’s going to be good.” The customer is further protected by Watts and Oster’s belief that a wine needs to be a value at any price.

“More and more people are drinking wine and buying wine,” says Watts. “This is in part because of the amazing restaurant scene across the state—it’s not just the coast anymore. I think that the wholesale wine and beer industry has become more competitive, leading to a better price and selection for the customer. Not every wine is for every person, but we think that ours are true to varietal and the place where they come from. We like to joke that we’re keeping Maine safe from bad wine.”

When I meet Jack Scully on a dark and rainy Sunday morning for breakfast, I’m immediately in the mood to drink three glasses of wine with my eggs. That’s the effect that the founder of Easterly Wine, based in the quaint seaside village of Belfast, has always had on me over the six years I’ve known him. He was one of the first “little guys” who brought to Maine an extensive knowledge of wine, which he had accumulated over the many years he worked for Ideal Wine and Spirits in Massachusetts. This was back in 2001, when Easterly and another distributor, Devenish Wines, were the lone independent crusaders in a Maine wine market otherwise dominated by four giant distributors. For more than 15 years, Scully has built personal relationships with the people who produce the wines in his portfolio, and he maintains those ties through exceptional vintages and times when Mother Nature has not been so kind.

Scully has kept his operation small, preserving the integrity of a selection that, while representing producers from all over the world, excels in French and Italian wines. Always humble, Scully claims that  Easterly would be nothing without his wife, Tammy, who handles the business end, and an extremely knowledgeable staff. His personal mentors are Ideal’s Larry Bender and Hugh MacPhail, as well as Bartholomew Broadbent of Broadbent Selections, whose wines form the foundation of Easterly’s portfolio.

As I walk through the Easterly warehouse, I get a true understanding of what it means to purchase wine from a small distributor. These are family-operated businesses, and these are the wines that are important to them. Which isn’t to say you will like every bottle they distribute, but at least you know that each one was personally tasted and selected.

With small distributors, someone is doing the dirty work for you. They are your advocates and personal tasters. They are willing to take chances on wineries that may not have the best packaging, but that deliver a product they truly believe in. And since there are fewer people involved in the buying decisions, the portfolios have more character and focus. They weed out all the nonsense in an effort to build trust with you, the consumer, one glass at a time.