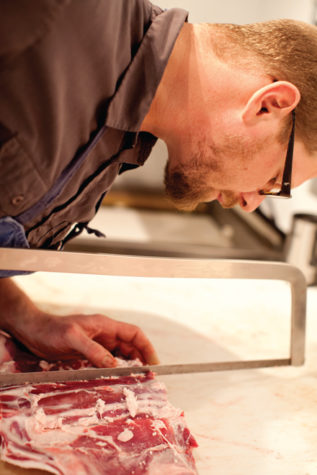 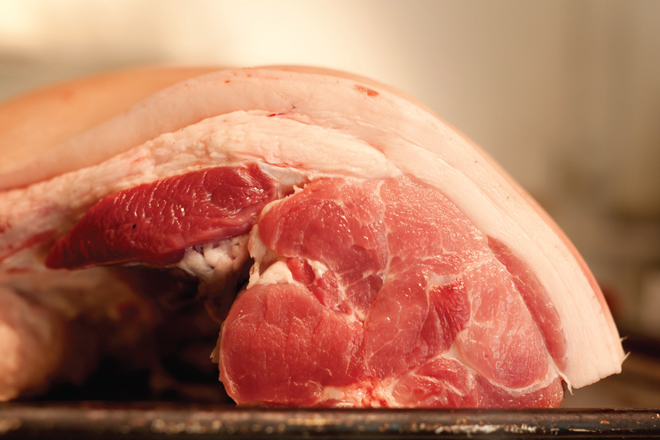 Almost too pretty to eat, heritage pork loin with the delicious, fatty belly still in tow. 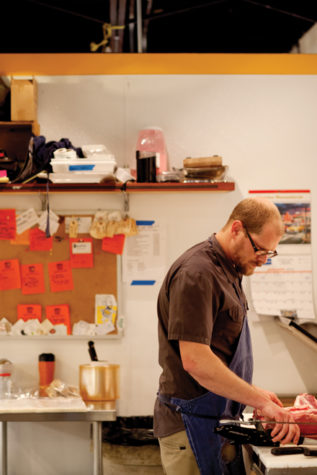 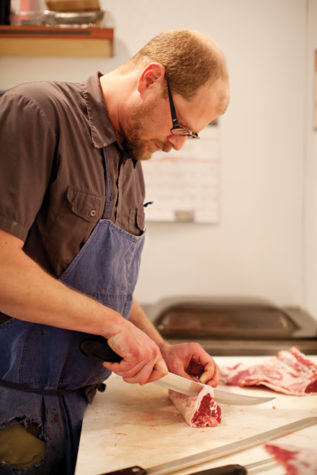 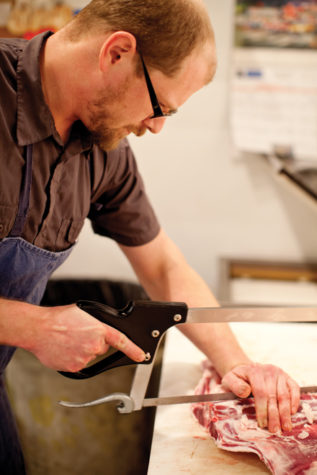 The Butcher of Rosemont

As Jarrod Spangler passionately holds forth on the characteristics of different animals and the processes entailed in carving them up, I come to the realization that for the past few minutes I haven’t heard one word that has come out of his mouth. Instead, I find myself in a bit of a trance, savoring each bite of the luscious, fatty slice of ham roast I have been given here at the meat counter at Rosemont Market and Bakery, where he is the resident butcher.

This slice of ham represents everything that Spangler stands for: the practice of properly raising animals and the art of careful butchering and respectful preparation. He strives not only to raise awareness of where his cuts are coming from but also to draw attention to the superior flavor of quality meat.

Rosemont owner John Naylor shares Spangler’s enthusiasm, and when he opened the newly expanded location on Brighton Avenue in Portland in the autumn of 2010, Spangler was the obvious choice for the shop’s head butcher. Within the first year of operation, the market went from outsourcing most of its meat preparation to breaking down an average of one cow, two lambs, and as many as three pigs per week, along with an occasional goat or veal calf. Sausage, bacon, prosciutto, and other cured meats are now prepared in-house, and a plan to add a line of terrines and pâtés is in the works.

All of Rosemont’s meat is sourced from a few select farms in Maine and New Hampshire. Instead of taking a pig to a slaughterhouse where it is broken down and packaged for freezing before it can be sold off, the whole animal is simply sent directly to the market, which gives the farmers more time to do what they do best—manage their farms. Some operations, such as Milkweed Farm in Brunswick, have now expanded to raising pigs year-round for Rosemont due to the high demand.

It’s important to note that most of the meat you purchase in this country has been already separated into primal cuts, vacuum packed, and frozen at a faraway slaughterhouse. In some cases, the meat may have been packaged months or years before you bought it. Spangler arranges appointments up to eight weeks in advance before personally going to pick up an animal, which will be still intact. He procures it in premium condition, prior to any kind of freezing, and does all of the processing himself. This hands-on approach makes for a far-superior product and gives customers access to a wider variety of animal parts.

Although the array of steaks, sausages, and birds in the Rosemont deli case are distracting, it’s also okay to be on a narrow mission when visiting Spangler at the market. On occasion, he has clued me in on the arrival of a fresh veal calf so I can get my hands on the coveted kidneys, or he has custom smoked a few large ham hocks so I can make a proper choucroute garni. He is always willing to acquire something he doesn’t have on hand by way of special order.

A native of Pennsylvania, Spangler spent time after his graduation from the Culinary Institute of America working for such notable chefs as Barbara Lynch at the Butcher Shop in Boston and Michael Tusk at Quince in San Francisco. His growing obsession with butchery led him to take a few months off from the hectic kitchen life to travel across Italy, where he observed the way that Italian meat cutters prefer to break down the whole animal far more than their American counterparts. Intrigued and inspired, he returned home and threw himself back into restaurant work until he received a random call from a man he had befriended while traveling abroad. The man had a unique business opportunity, and he was asking Spangler to run the kitchen of a restaurant he was opening in the Italian Alps.

Without missing a beat, Spangler sold his car to purchase a plane ticket, and within weeks he was setting up a new kitchen. Throughout his tenure at the restaurant, he worked primarily with two butchers, one who specialized in the intricacies of cows and another who favored the art of carving up pig. The latter taught Spangler how to prepare hogs for curing salami in the Piemontese style, among other techniques. The cows came from the high pastures of the Alps in the summer and the lowlands in the winter, while the pigs were raised in the next town over by lifelong friends of the butcher.

With this experience, the gears began cranking in Spangler’s head—he realized that everything he learned could be put to good practice back home in America. He had fallen in love with Maine during a kitchen externship in 2003, and he decided that the state would be an ideal location to start his own operation, because he could build on the relationships he had already established with local farms. He wanted to create an establishment that would sell meat so good that it would actually make people consider the source of their purchases. Combining forces with Naylor made his vision a reality.

As he continues to expand Rosemont’s meat business, Spangler hopes to begin processing up to as many as seven pigs a week, with intentions of curing meat on a much larger scale. Amazing pork produces equally amazing salami or coppa—a niche market he would like to see expand. He is rapidly expanding his selection of sausage in addition to offering a variety of bacon, offal, and smoked duck. He would like to sell porchetta—a labor-intensive, herbed Italian pork roast—at least once a month and other slow-cooked delights on a weekly basis.

While building this business model is a lot of work, Spangler says that it’s also a lot of fun. And after tasting his outstanding local meat time and time again, I am now an ardent believer. It’s amazing how something that I have cooked a thousand times is so dramatically enhanced when I use Rosemont’s product. It also makes a compelling argument for vegetarians who have turned their backs on meat largely as a protest against inhumane meat-industry practices.

And, of course, there is always the argument that pork fat is nature’s candy.