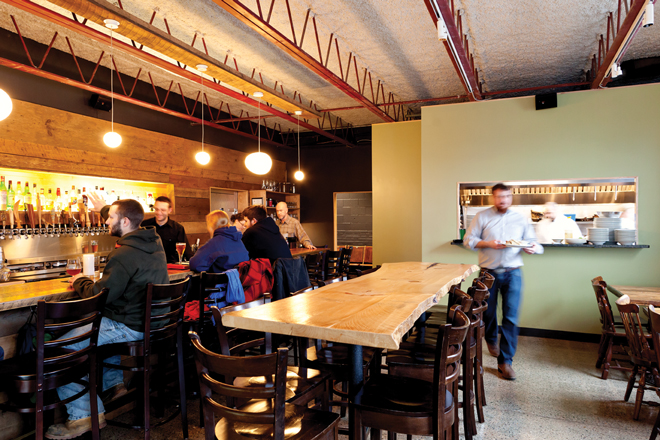 A beautiful communal table made from reclaimed white pine acts a centerpiece in the bustling dining room. 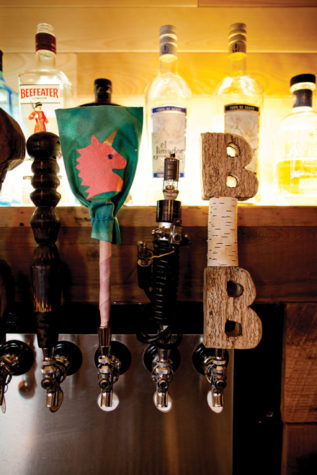 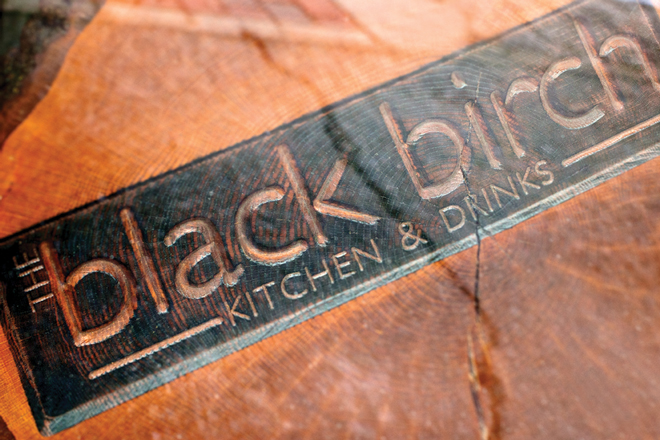 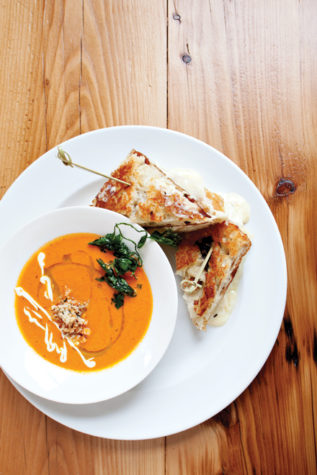 Grilled cheese and tomato soup, why fix what isn't broken? 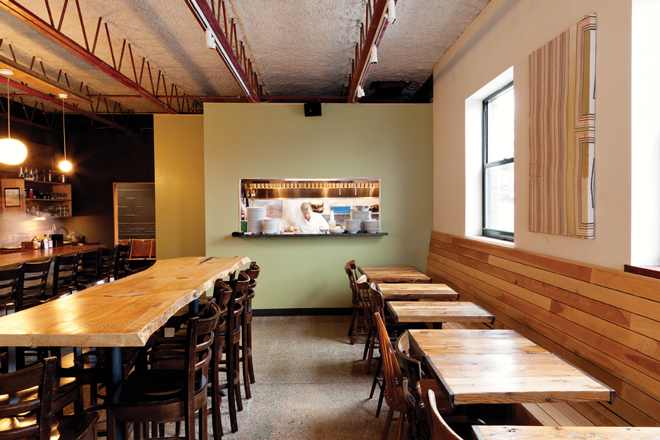 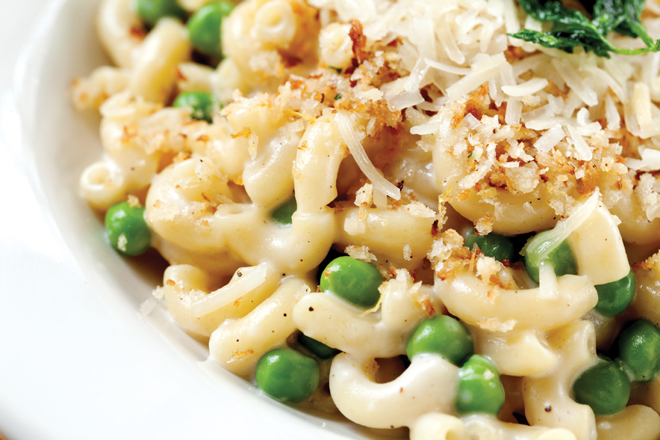 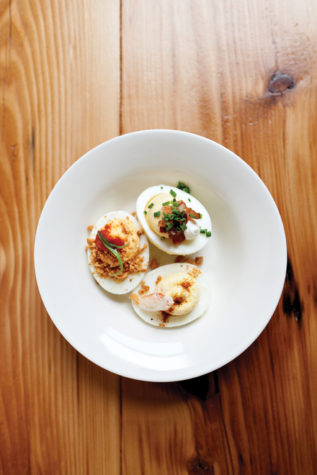 For some, the deviled egg is a blank canvas. 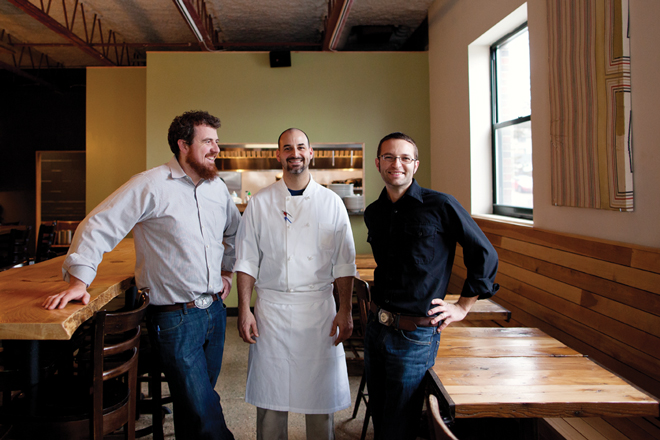 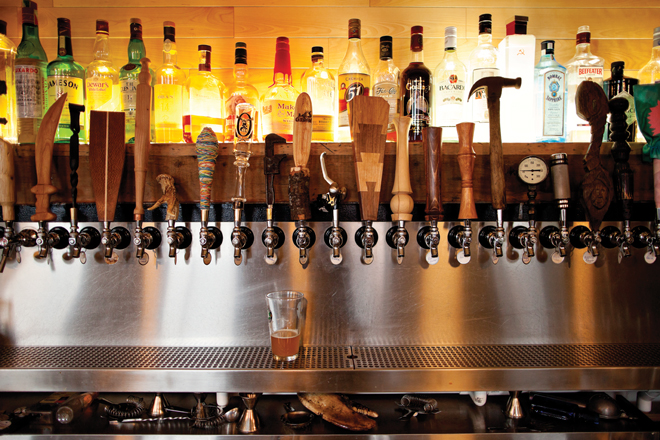 Perpetually rotating draught selections ensure that you will not get bored.

Offering a combination of revamped American-style classics and rustic country fare, the Black Birch has already established itself as a destination amid Kittery’s wealth of dining options.

There are a lot of ways that I could describe the Black Birch, but I fear that phrases such as “fresh, honest food made from scratch” or “sourced locally and seasonally” are far too humdrum and conventional. Once I set foot into the dining room, which conveys a sleek, almost industrial modern-farmhouse vibe, I feel energy rippling through the air. Even though I happen to be quite famished, I’m reinvigorated by the throngs of diners crowding the bar, jamming up the front hallway, and trying to get their names on the list, which helps me prepare, mentally and emotionally, for what I suspect will be a long wait.

After a few minutes, co-proprietor Benjamin Lord spots us and makes his way gracefully through the packed dining room to take down our names. In the meantime, we will be seated in a row of stadium-style wooden benches situated across the dining room. It’s a highly suitable perch from which to people watch and sip Avion Anejo tequila on the rocks. I settle in and let my appetite build.

The Black Birch opened it’s doors on December 1, 2011, and they have not had a moment to look back ever since. The restaurant seems to have struck a chord, and community response has been overwhelmingly positive. The entire restaurant has been remodeled, and it now bears zero resemblance to its previous occupant, the restaurant Tulsi, which relocated to expanded digs up the street.

Lord has two business partners: Gavin Beaudry, a longtime friend and coworker who helps run the front of house, and Jake Smith, the executive chef. While tending bar together for several years, Beaudry and Lord talked about opening a restaurant of their own. When this space became available, they felt the timing was right to pull the trigger and follow their ambitions. During the initial phase of development, Smith entered the picture. Skye Bonney, the sous chef at the Black Birch and Lord’s girlfriend, had worked with Smith in a few kitchens over the years, and she knew he wanted to relocate to Maine. An accomplished chef who had worked most recently as chef de cuisine at two Boston restaurants run by chef Lydia Shire—Scampo and Towne Stove and Spirits—Smith became the final element Beaudry and Lord needed to move forward. During a particularly spirited night spent drinking rye whiskey around Beaudry’s fire pit, the name of the restaurant was born. The name’s intention, according to Lord, was to be “indicative of a place, but timeless.”

The Black Birch aesthetic is anchored by a gorgeous, handcrafted bar constructed entirely from reclaimed pine that dominates about a quarter of the restaurant. Polished concrete floors give the aforementioned industrial farmhouse feel, as does the stunning communal table—built out of masterfully finished eastern white pine—at which my dining companions and I are seated. A birch banquet extends the length of the wall opposite the bar, and each individual pine table complements its texture and color. Abstract art made of various fabrics adorns the walls, dutifully serving the purpose of representing nothing in particular so diners can focus on the food.

The menu, built and sourced based on personal relationships with local purveyors, includes a chicken-liver mousse that is more delicate and silken than any I have ever experienced. A thin layer of apple cider gelée adds a wonderfully sweet balance to the rich, buttery liver before I smear it all on a grilled baguette. The plump, juicy Blue Hill Bay mussels steamed in limoncello with thyme, oven-dried tomato, and cream is a dish that may seem a bit off-beat at first, but the flavor profile makes perfect sense once you taste it.

Classic combinations are executed to perfection, including the decadent and creamy veal sweetbreads topped with an immaculately poached runny egg and served over spinach with warm bacon vinaigrette. Other dishes are more playful, such as the deep-fried beef short ribs with a flaky batter crust reminiscent of fried chicken. The menu is divided into three categories—first bites, small plates, and large plates—but selections from each easily accommodate sharing. Feel free to “order away.”

The drink selection is beer heavy and includes an extensive and constantly rotating draught selection. What could be better than a large slab of golden, crispy-fried veal schnitzel topped with a delicious fried egg and washed down with a sea of Weihenstephaner Lager from Bavaria? Several Maine breweries, such as Oxbow and Allagash, are also represented and perform brilliantly with the charcuterie plate—it’s no wonder that bar seats are such coveted real estate here.

On this visit, I choose to forgo both the beer and the classically influenced cocktails, opting instead for wine throughout the entire meal. I also decide to put my fate entirely in Lord’s hands—a decision that turns out to be inspired. The evening’s standouts include a zinfandel from Vines on the Marycrest, a small Paso Robles producer, that Lord pairs with a decadent, heaping pile of french fries smothered in duck gravy, cheese curd, and a luscious duck confit. The Black Birch’s heart-stopping take on poutine dovetails well with the wine’s black pepper and plum characteristics. Equally successful is the combination of the cassis and clove notes in the Ramey Claret from Napa and the cider-brined pork porterhouse with deeply caramelized, candy-like fat. The porterhouse arrives resting in a pool of pureed sweet potato and accompanied by buttered green beans and crunchy cashews. The expletives bursting forth uncontrollably from my mouth throughout the evening, at fairly loud volumes, convey just how much I’m enjoying the pairings.

Despite the relentless onslaught of customers that has continued to pour into the restaurant for the past few hours, service remains calm and friendly—the mark of seasoned professionals who understand just how little gets accomplished in the frazzled, hopeless state of stress that those in the business call “being in the weeds.”

Lord, Beaudry, and Smith truly believe there is something about simplicity that never goes away. In the restaurant business, overthinking and complication confuses everyone—the customers and owners alike. This philosophy, which has become something of a mission statement for the Black Birch, is perfectly embodied by my dessert: fresh apple-cinnamon doughnuts with a bourbon milkshake on the side. It takes me back to being a kid, albeit a kid who had a penchant for sneaking sips of his parents’ bourbon.