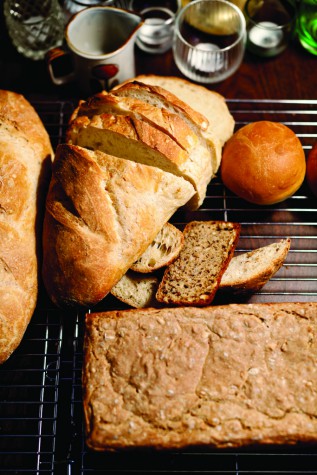 Warm, freshly baked bread gets even better when slathered with liptauer. 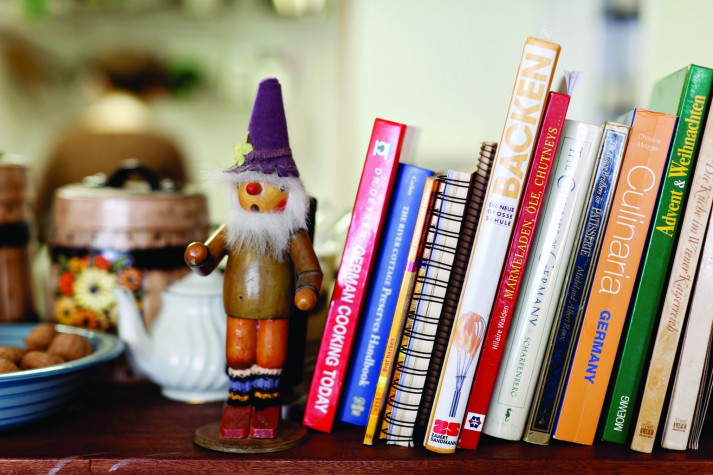 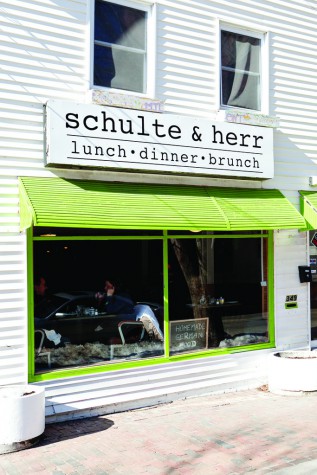 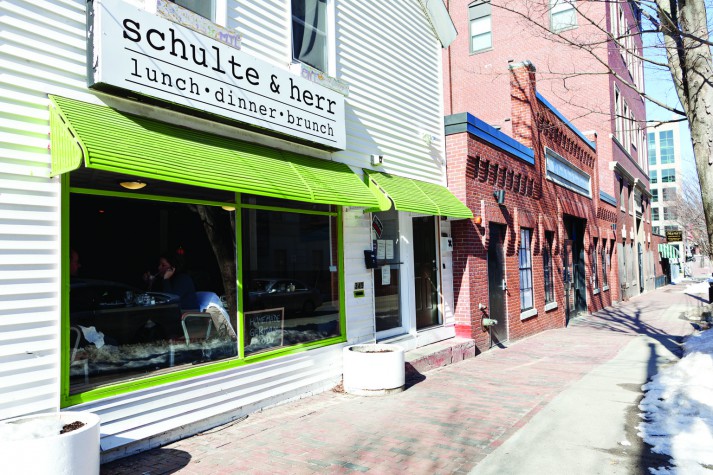 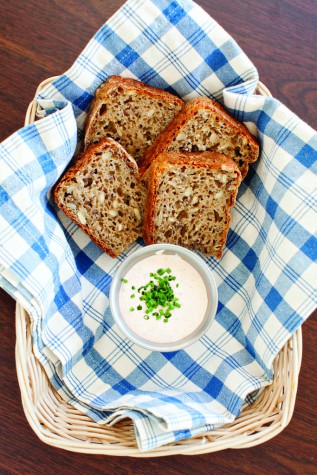 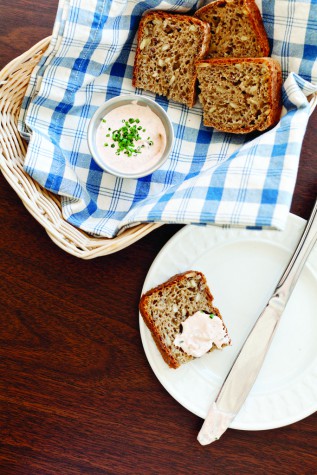 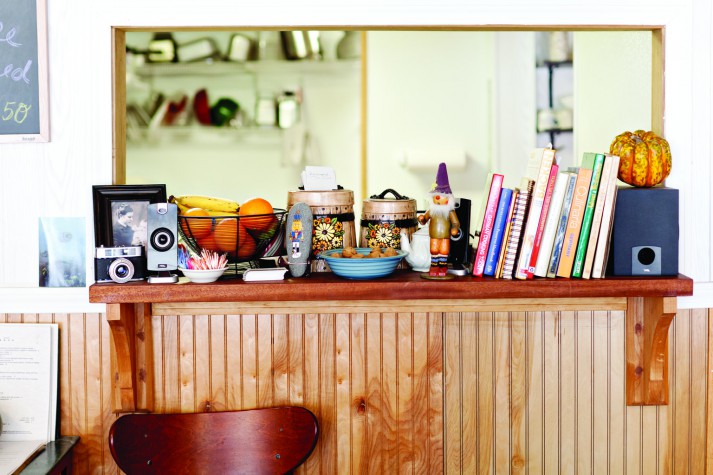 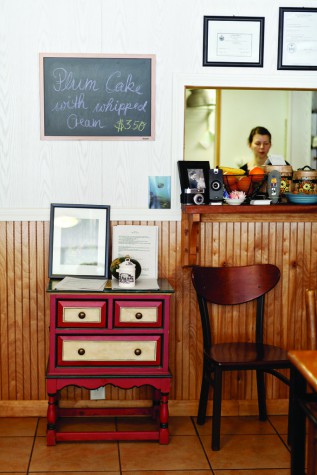 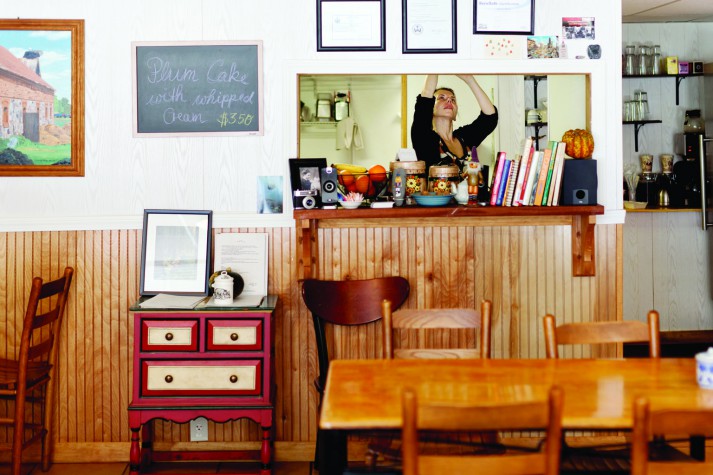 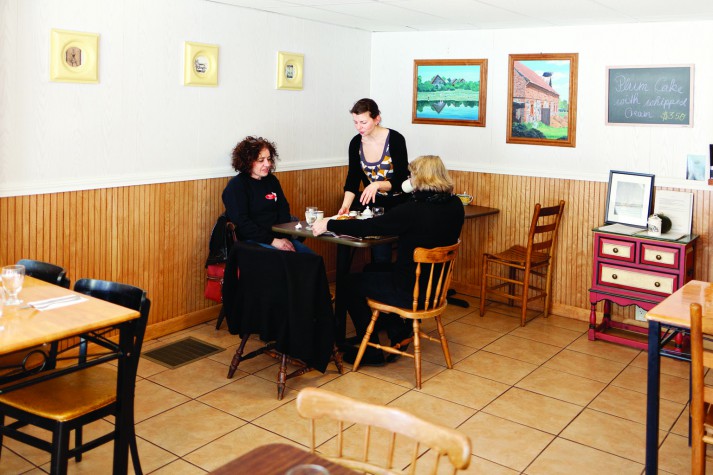 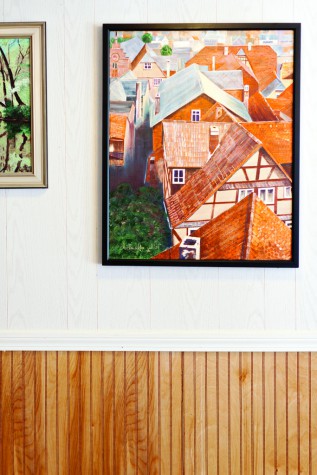 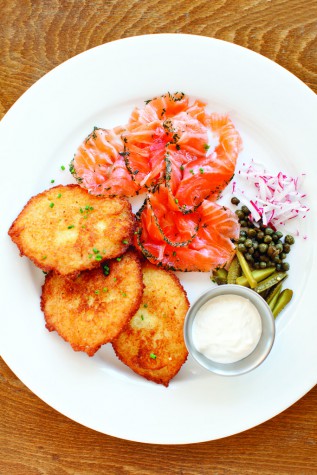 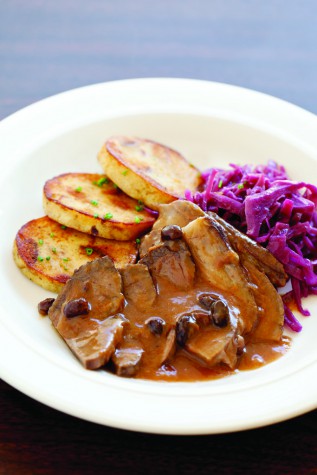 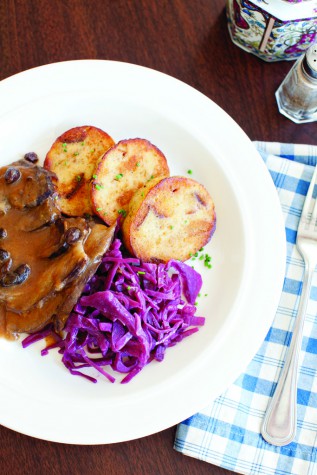 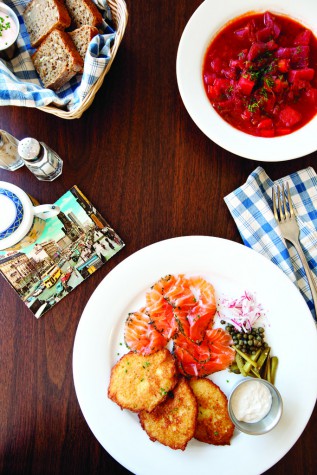 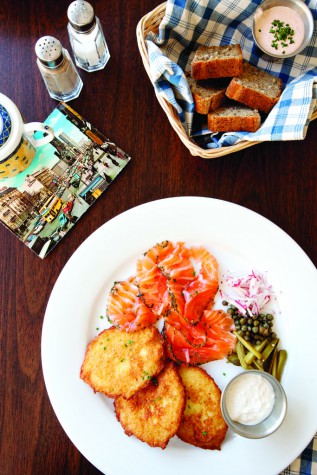 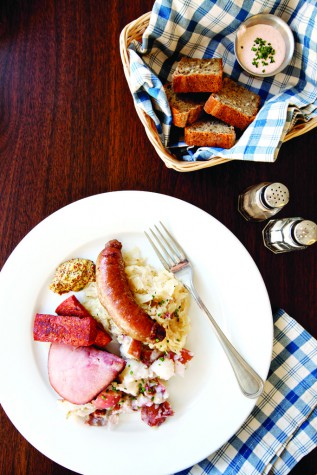 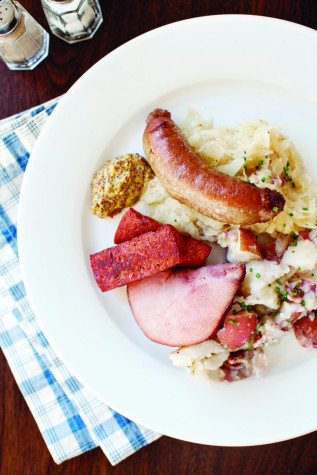 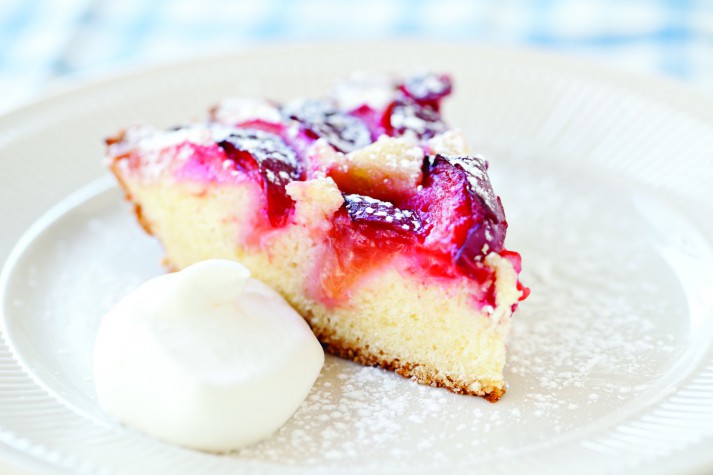 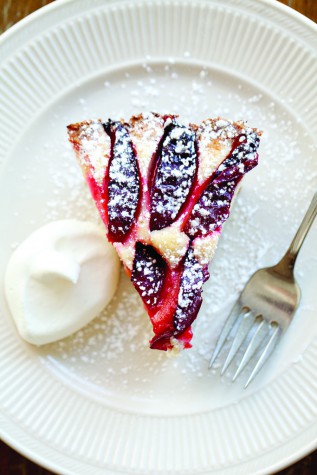 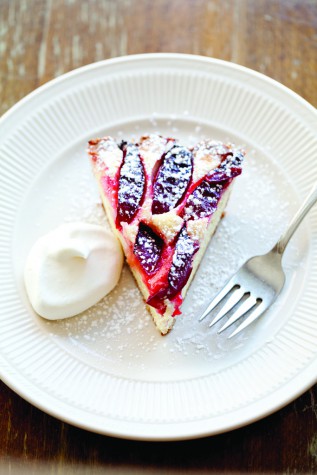 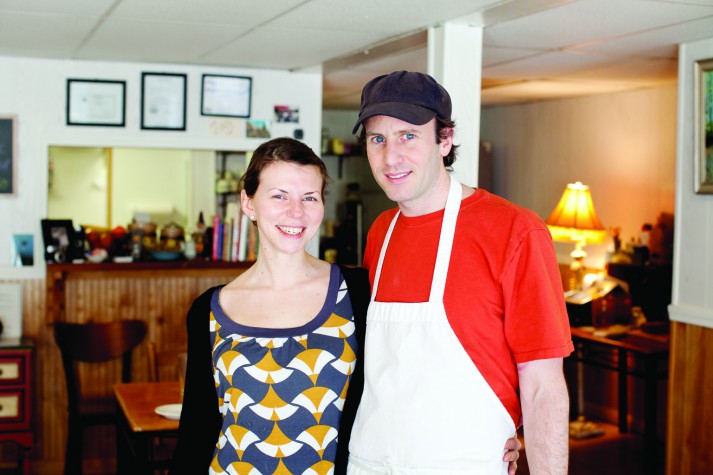 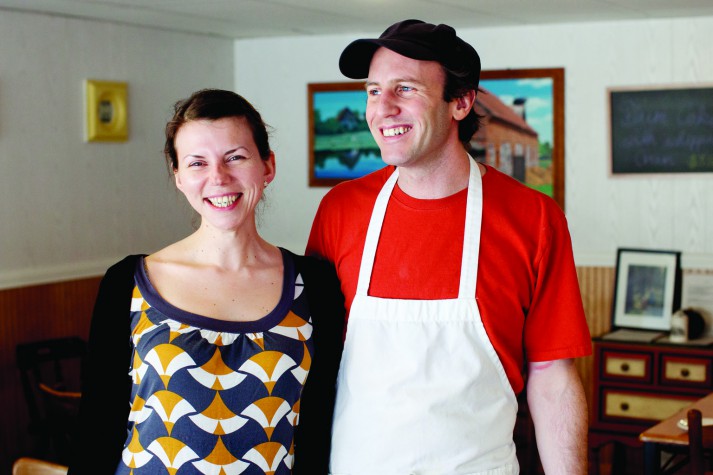 Beautifully executed German cuisine finds its way to Portland, in the most unassuming of small spaces. Bringing your own beer stein is optional.

This is a German word used to describe the cooking routine commonly employed by one’s grandmother. It refers to simple, traditional home-cooking intended to warm the soul and soothe the tensions of the day.

Schulte and Herr in Portland is defined by the hausmannskost style of cookery. Although the menu is influenced by the many cultures that have molded German cuisine into what it is today, owners Brian and Steffi Davin explain that the culinary focus is on the southern part of the country that borders Austria.

“Southern cuisine has more finesse by nature, leaning heavily towards dumplings and spätzle, though we still dabble in a bit of Eastern European styles, as well as the Alsace” continues Steffi. “We met in Berlin, which is somewhat of a melting pot.”

Brian, a New Jersey native, attended the New England Culinary Institute before leaving for Berlin more than ten years ago to visit friends. After he arrived, Brian began cooking in an Irish pub while observing and absorbing the methods used to prepare local favorites. In common restaurant-industry fashion, the two met while working together and started dating.

After living together in Berlin for nearly a decade, Brian and Steffi decided that a change of setting was in order. They headed for America, where they worked briefly in restaurants in western Massachusetts before visiting Portland. The couple instantly fell in love with the city’s charm, and it soon became apparent that the German cuisine niche had yet to be filled. They immediately set out in search of a small, reasonable space to set up shop, hoping to showcase the style of food that they themselves enjoy eating. Brian would run the kitchen and Steffi would manage the front of the house. While wandering around the city one day, they stumbled onto a tiny, vacant storefront on Cumberland Avenue not far from where they were living. They made the decision shortly thereafter to set their dream into motion.

The renovation resulted in a simple dining room that lets the food take center stage. The decor is sparse, save for a few paintings of the old country. While the restaurant quickly materialized, the name, interestingly enough, was one of the last decisions the couple made. While walking on the Eastern Promenade on a particularly brisk day, they concluded that the name had to be German—”Steffi and Brian’s” sounded too much like an American diner. Schulte is Steffi’s mother’s maiden name, and Brian’s great grandmother’s maiden name was Herr. A perfect match.

For the first six months, Schulte and Herr was open for breakfast and lunch only, but they soon launched a brunch service that includes a daily roast that knows no equal. Steffi and Brian eventually moved away from breakfast, except for the popular weekend brunch, and—with the addition of a BYOB policy—now serve dinner.

I highly recommend bringing a bottle of one of the drier Rieslings from Germany or the Alsace, as they have wonderful limestone-driven acidity that cuts through the richest dishes. Red wines from the Loire Valley, such as Chinon and Saumur, also have the necessary backbone, complemented by just enough fruit, to go the distance here. Of course, German beers, from producers like Weihenstephan Abbey and Schneider-Weisse, are a natural pairing with the Schulte and Herr style of food.

Though I have eaten at the restaurant on numerous occasions, this visit is my first time sampling the dinner options. I arrive with two companions who are intent on trying the entire menu. Brian is happy to oblige, and the procession of hausmannskost begins.

All the restaurant’s breads are baked in-house, and we begin with a basket of warm rye sourdough with flax seed. The condiment of choice, liptauer, is a mouthwatering blend of cream cheese, sour cream, paprika, caraway, and chives. A few cold plates arrive, the first bearing several meats, including a mild, lightly smoked German prosciutto and slices of smoked salami from Maurice Bonneau’s Sausage Kitchen in Lisbon Falls. The second platter, gemischter salatteller, is an assortment of pickled and marinated vegetables, positioned neatly around a butternut-squash puree with pumpkinseed oil. In addition to bright, citrusy beets, the marinated mushrooms are among some of the best I’ve had.

Zwiebelkuchen, a caramelized onion and Gruyere tart, is cooked to a crispy golden-brown perfection on the outside to complement the soft custard filling. Next up is a dish that I personally swear by: luscious potato pancakes with house-cured salmon, horseradish sauce, cornichons, and capers. The Eastern European influence presents itself in the form of borscht, a brilliantly colored beet stew with a liberal amount of aromatic thyme and braised oxtail (a first for me).

Yet the dish that made a true believer out of me is the rheinischer sauerbraten, a German pot roast. Brian marinates the beef in spices and red-wine vinegar for three days, before straining the marinade and reducing it into an outrageously flavorful gravy that is thickened with crushed ginger snaps. After the meat dries, it is browned before being slowly braised on low heat for a ridiculous amount of time.

There is generally only one dessert available nightly at Schulte and Herr, and it’s advertised on a small chalkboard hanging near the kitchen. Tonight, it’s a soft lemon cheesecake with a thin layer of bitter orange that nicely balances the sweetness of the dish.

Despite its unassuming location and décor, the restaurant serves up some of the best food in Portland. The dining room, in a very short time, already feels lived in, comfortable, and familiar, and the BYOB option only heightens the feeling of being welcomed into someone’s home.

And that’s exactly what Brian and Steffi want.