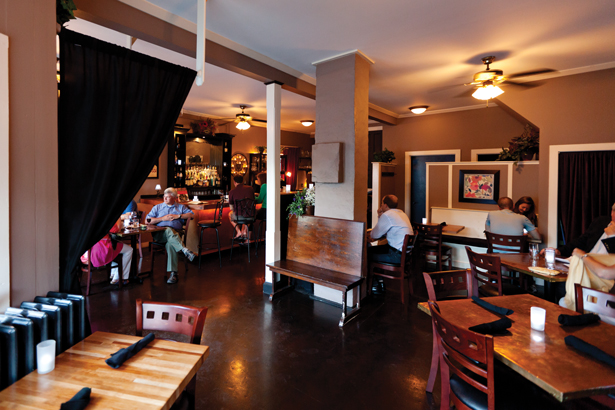 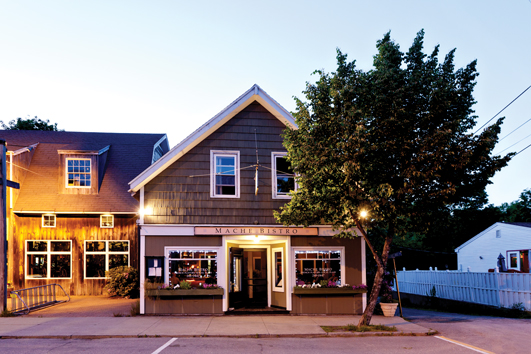 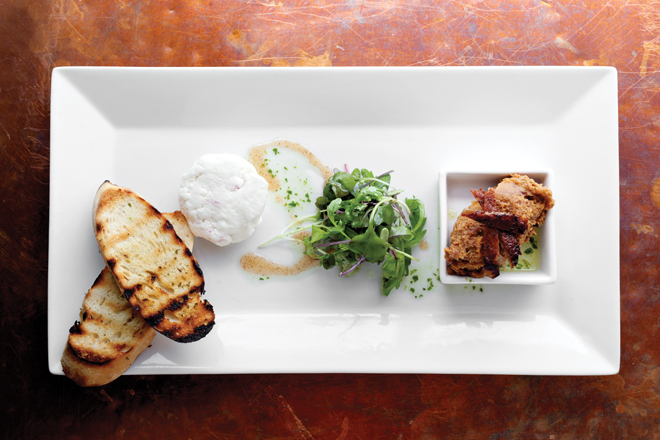 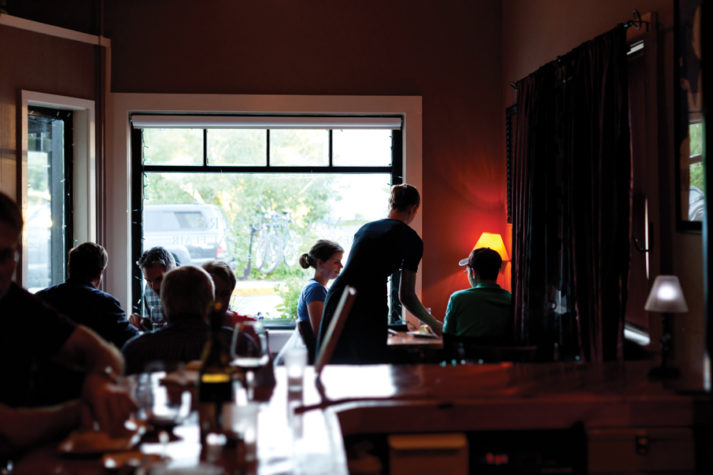 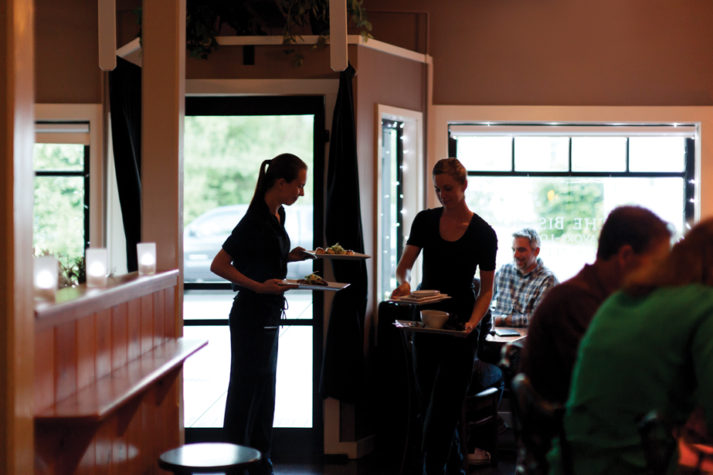 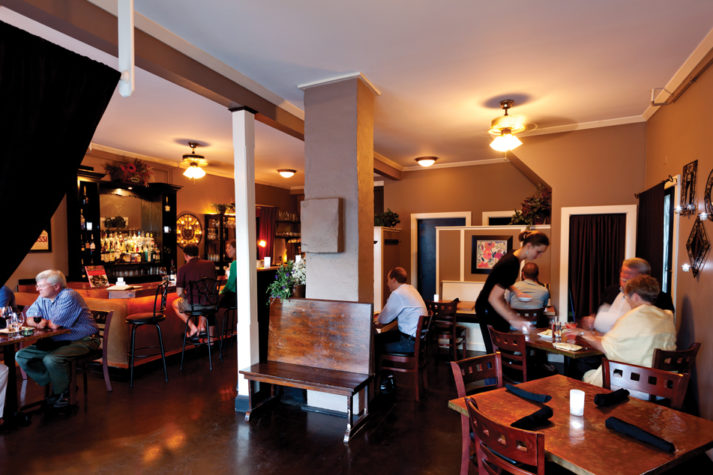 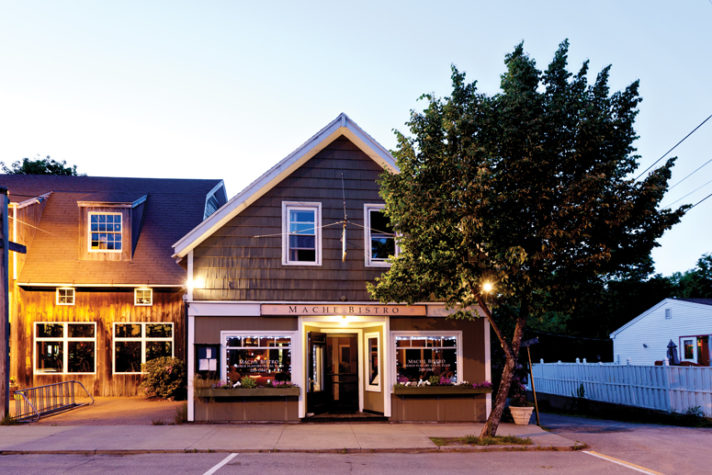 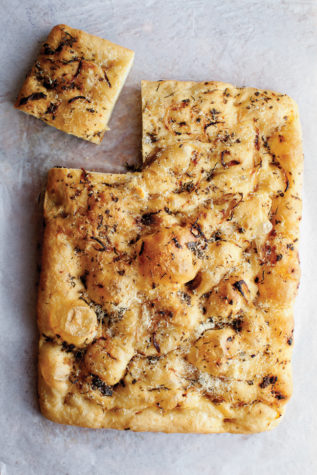 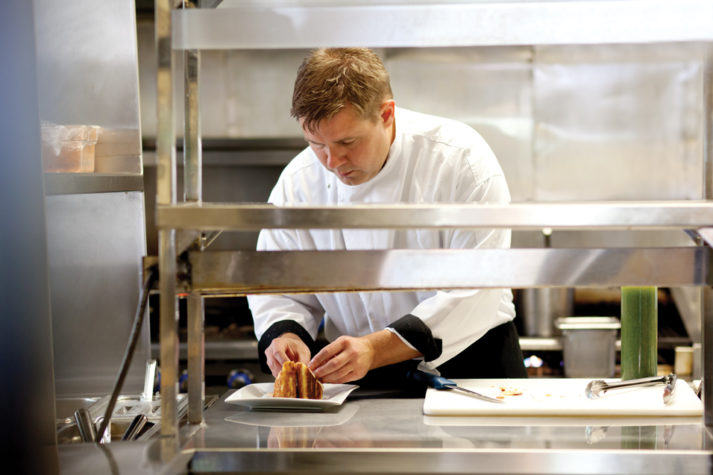 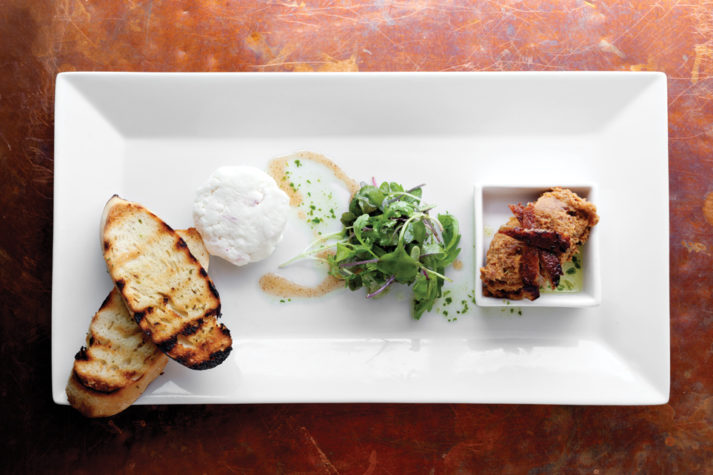 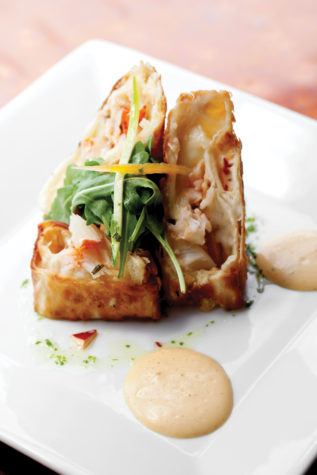 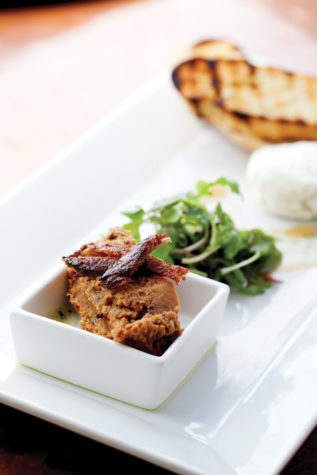 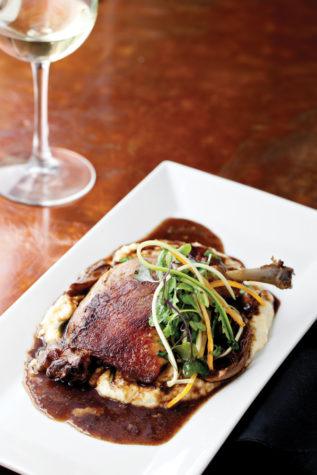 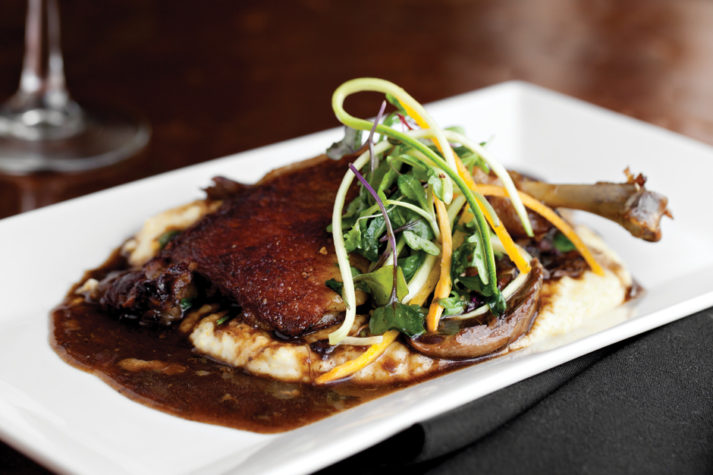 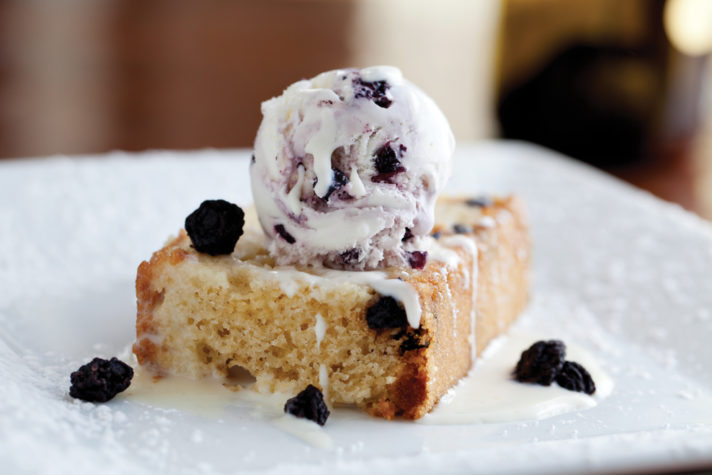 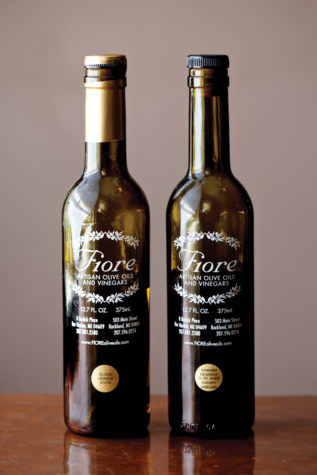 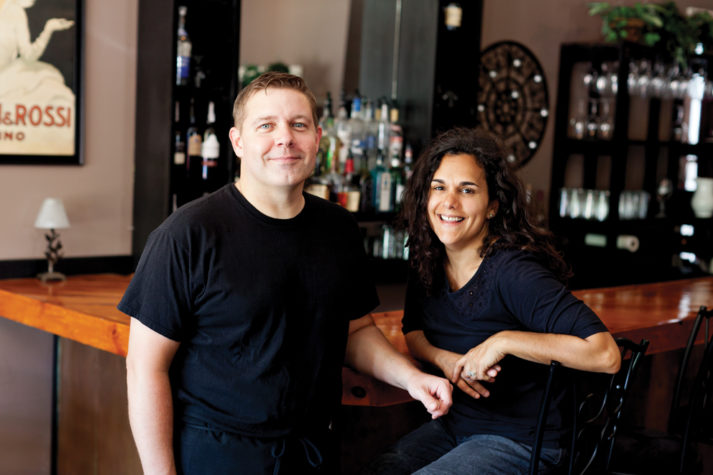 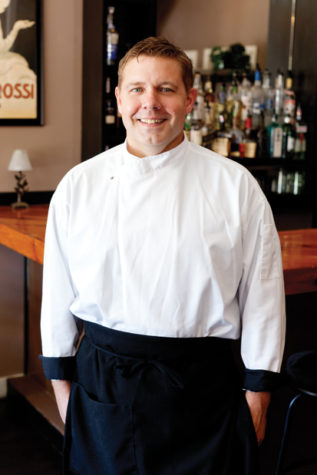 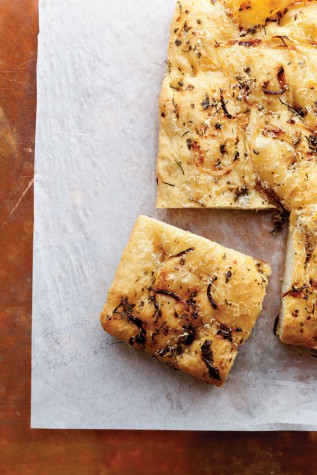 French technique and international flavors come together and prove that breaking the rules can yield some very delicious results.

It is safe to say that, for most people, the word “bistro” conjures images of small Parisian cafes complete with servers decked out in weathered black vests pouring wine out of carafes. There are others who would argue that the origins of the word date back to the Russian occupation of Paris in the early 1800s, when Cossacks who demanded prompt service would shout bystro, meaning “quickly.”

When chef and owner Kyle Yarborough and his wife Marie purchased the already-established Mache Bistro from its former proprietors in 2009, they regarded the “bistro” title as an open invitation to abandon traditional menu structure and create dishes that reflect Kyle’s individual cooking style.

“I trained in classic French cooking in Charleston after graduating from college, but always hated the structure,” Kyle explains. “I wanted to use flavors from all over, but classical French cookery is very strict. I still managed to do quite well in my classes—I just felt restricted. After finishing, I returned home to Darlington, South Carolina, and worked at a small contemporary southern restaurant where the chef was from Thailand. This is what exposed me to the concepts of hot, sour, salty, and sweet, and that is what has stayed with me through all these years, more than the French cooking school.”

While growing up in the south, Kyle was exposed repeatedly to foods with French, Cajun, and African influences. When coupled with his passion for regional dishes from South America and Mexico, as well as the spice-driven countries of the Mediterranean, the end result is cuisine that some may consider irreverent—even though they would be forced to admit that it’s also delicious. For example, Kyle’s version of brandade, traditionally prepared with potato and salt cod, is made with sweet potato, smoked duck, and brown sugar to lend it a more southern flair. Ancho-chili rub is applied to the duck for confit, imparting smokiness without the heat.

“Most people do not think of ancho chilies when they sit down at a French bistro,” says Kyle, “and obviously the French would never use chilis in any of their dishes. But it’s the layering and subtlety of flavors that can really make a dish stand out. Hot, sour, salty, sweet—that balance of flavor is not just in Asian cuisine. This is really the foundation of what I do at Mache; I just happen to choose those elements from several different countries at times.”

The Yarboroughs have a combined total of more than 40 years in the restaurant business. Marie mostly favors the front of the house and Kyle the back (of course). Marie, who assumes the role of a park ranger by day (complete with the uniform, as she puts it), oversees the daily operation of the restaurant, including the hiring and marketing. Kyle assumes the lion’s share of the kitchen responsibilities, doing all of his own prep work and literally cooking all of the food, including the desserts. Marie points out that most customers still have trouble grasping the concept that he is back there doing everything by himself.

“Even family members sometimes ask if Kyle can come sit down and eat with them, and then go back to the kitchen to finish up. Um, no, that won’t really work,” Marie says.

Bar and dining room supervisor Houston Cady, whom the Yarboroughs refer to as “their eyes and ears,” is a crucial component in the overall feasting experience at Mache. As Marie puts it, “he knows his wine, loves his food, and never loses his shit.” He also brings more than 20 years of experience in the business—12 of which have been spent working with Kyle at various eateries around Mount Desert Island.

The wine program is a group effort, created with an emphasis on more interesting, smaller production selections from boutique producers. A large percentage of the book is French, but it’s nicely complemented by bottles from California and Oregon, as well as a few eclectic surprises.

It is important to mention the size of the bistro—there are only ten tables, each built from butcher block and situated relatively close together, and a small bar. There are no tablecloths and the streamlined decor is casual modern with a slightly industrial look that places all the focus on the food.

I have a strong personal affinity for pretty much any kind of fusion cuisine, since I do not believe that rigid rules should be applied to food, provided that the improvisation serves to improve the essence of the dish. Thus, I am excited to work my way through Mache’s many offerings. It’s a mid-May weekend, and the throngs of tourists don’t start pouring into Bar Harbor until late June, so we have the restaurant largely to ourselves and I feel like I can stretch out and really feast.

As we settle in, I marvel over the bread, which has been served warm and drizzled with brightly flavored, herb-infused olive oil. As it turns out, Mache employs what many would consider a “dream team” of bakers: the baguettes come from Bar Harbor bread icon Agnes Smith and the rustic French sourdough is baked by Mike McKernan, known throughout the restaurant as the “Shy Baker,” due to his cautious nature and his desire to keep his baking operation very, very small.

I am immediately put at ease by the first course: fresh lumps of peekytoe crab resting atop a multi-textural salad of crunchy cucumber and buttery avocado. A peppery, lightly dressed local arugula contributes to the refreshing nature of the salad, which Houston attentively pairs with a liberal pour of Writer’s Block roussane from California, a white Rhone varietal rife with flavors of dried pineapple and lime peel.

Throughout the meal, we encounter no shortage of local cheeses, including Seal Cove Farm’s Olga, made from a combination of cow and goat milk, and served shredded over a fiddlehead salad. Sunset Acres Farm’s cranberry chevré is irreproachable, smeared on crostini and accompanied by Kyle’s smoked duck and chicken-liver rillette.

Houston deftly handles service and effortlessly fields questions between courses, regardless of whether they are about the menu or not. I ask him if what I am hearing over the stereo is, in fact, the Finnish cello group Apocalpytpica playing an all-strings version of the epic Metallica classic “One.” I am excited to receive confirmation that it is.

I will admit that in a world in which pork

belly has become fairly trendy and commonplace on restaurant menus, it is reassuring to taste Kyle’s version. If anything, the dish reaffirms why we all love pork belly so much. The belly is seared until the crust takes on a perfect crisp, not unlike candy, while the meat remains meltingly tender beneath. It sits on the plate, surrounded by a moat of apricot and pine-nut brown butter, waiting to be hungrily devoured alongside a glass of slightly chilled Kermit Lynch Cotes du Rhone.

Dishes like these confirm Kyle’s confidence in his culinary vision, and the seemingly endless sea of customers, all hailing from various walks of life, vying for the ten coveted dining room tables, would most likely agree. My dining experience left me wanting nothing more than to continue exploring the menu, in anticipation of encountering the unexpected twists that make Mache Bistro stand out from other restaurants. The Yarboroughs, with Cady’s help, have created an overall experience that is simply not to be missed when visiting the town of Bar Harbor.