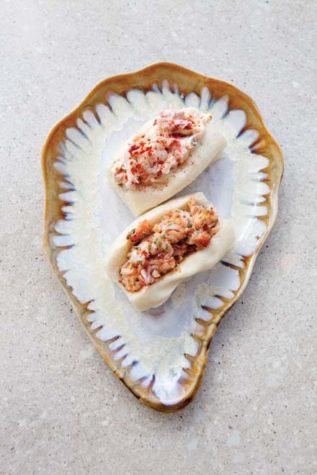 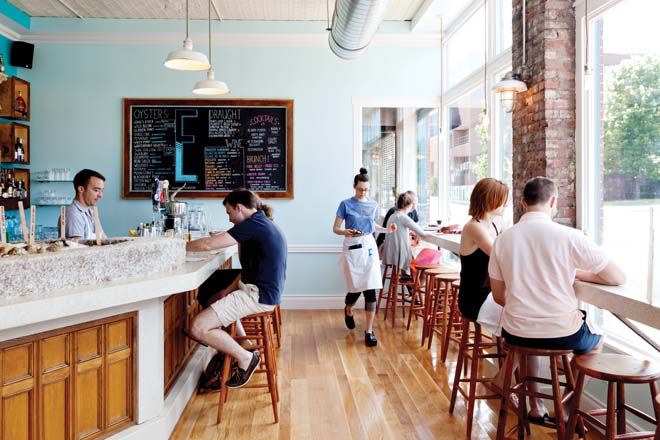 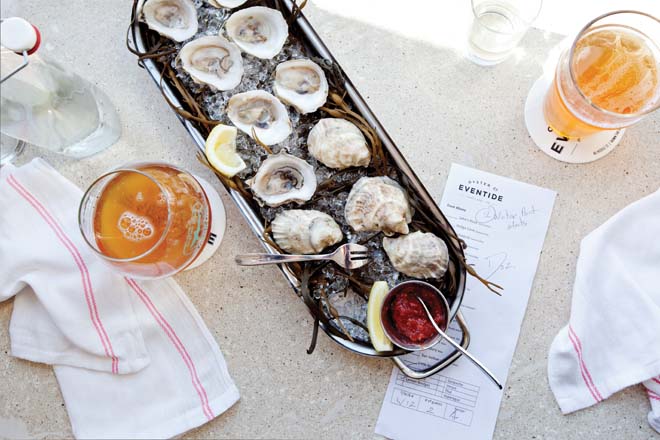 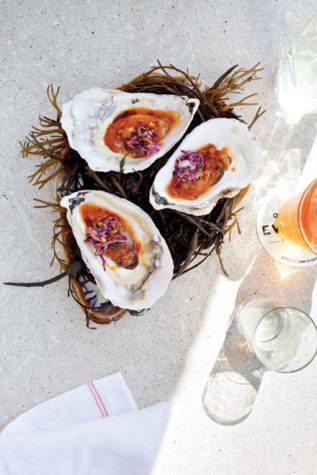 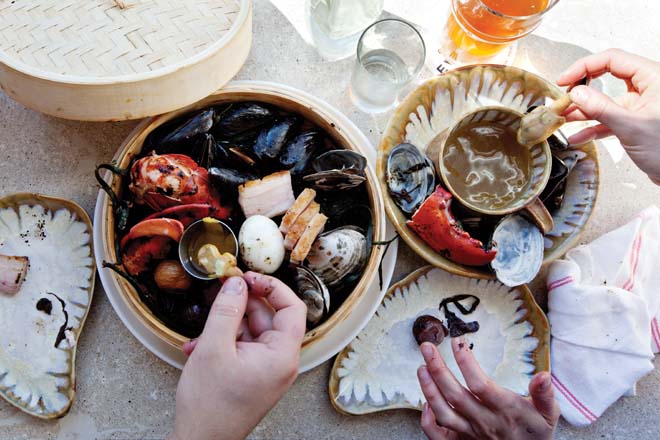 A New England Clambake as it should be: steamers, mussels, lobster, potatoes, salt pork, and a hard boiled egg served on a bed of rock seaweed. 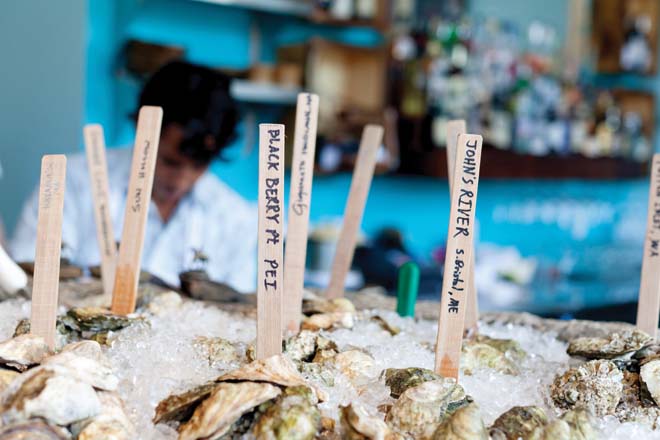 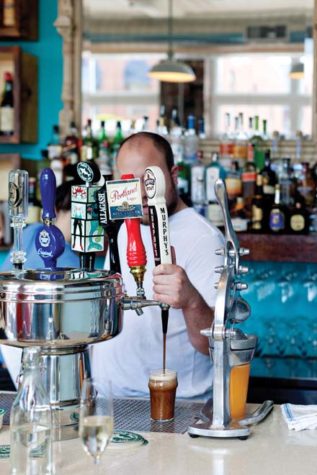 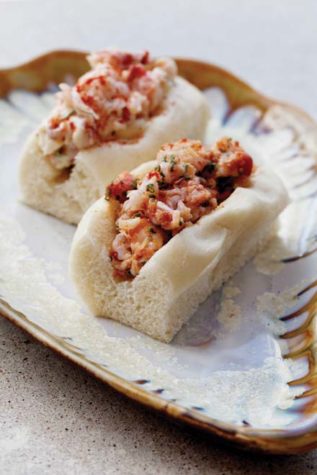 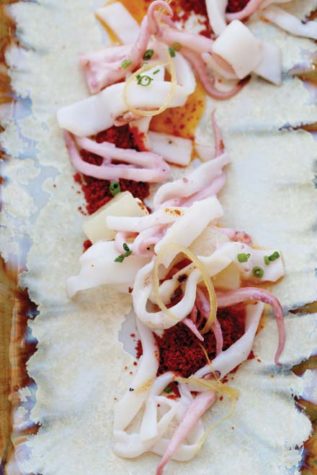 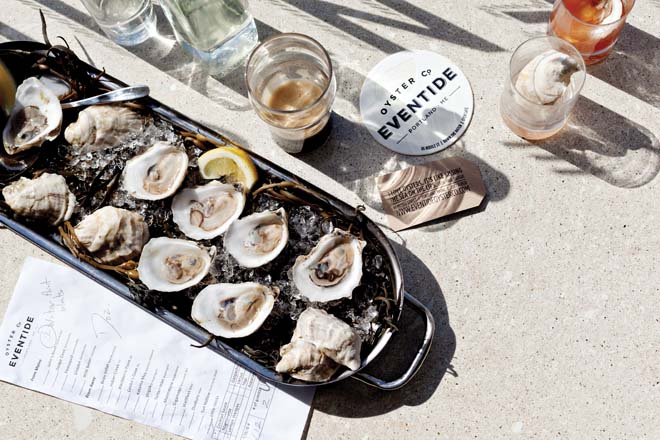 Winter Point Selects from West Bath - "like kissing the sea on the lips." 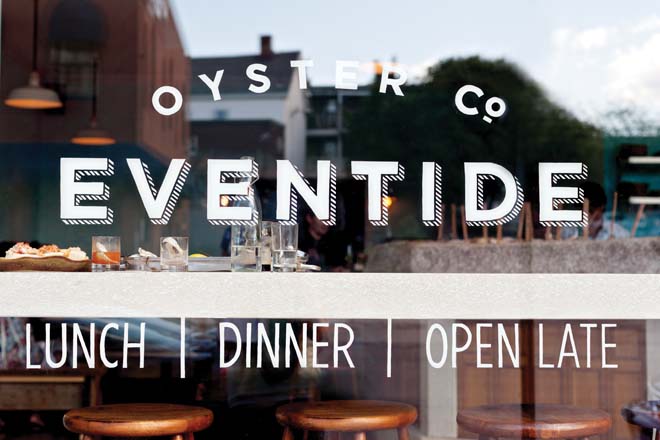 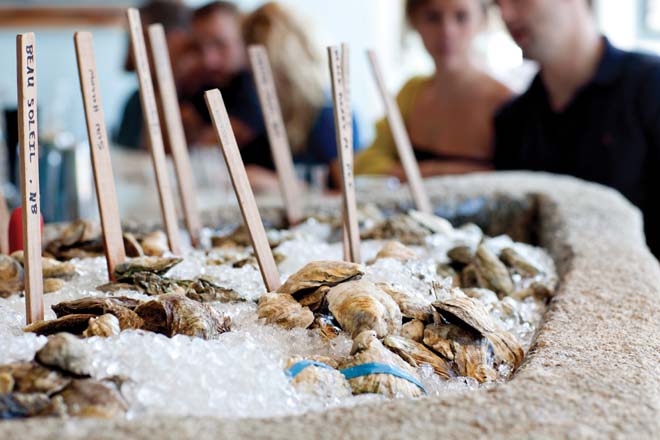 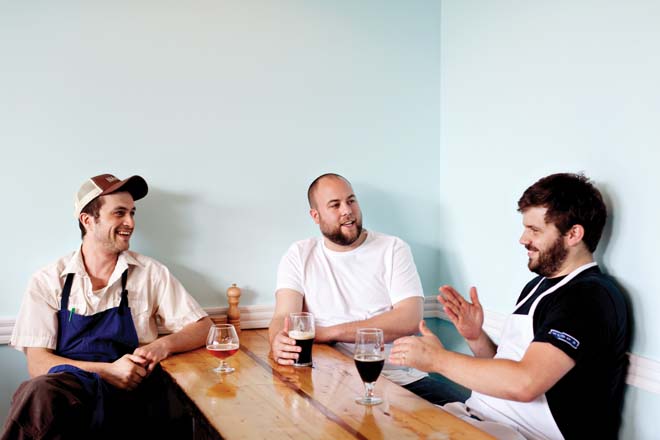 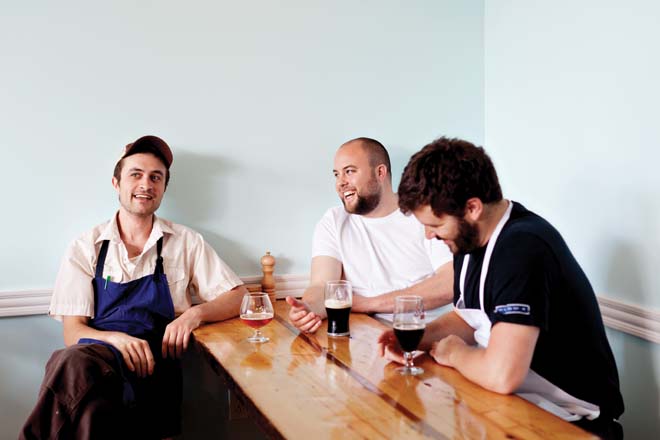 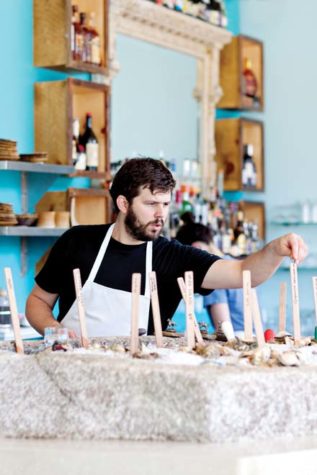 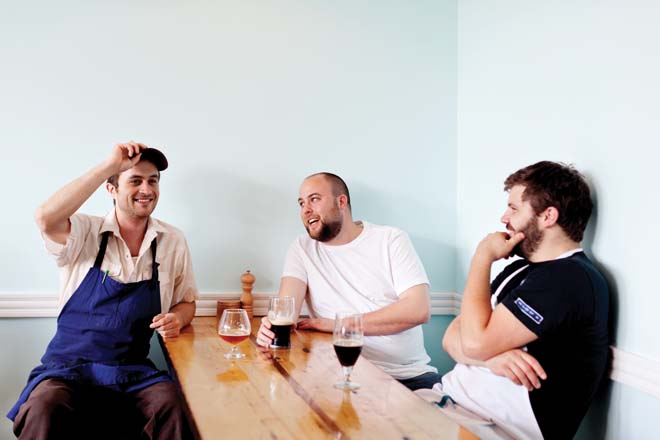 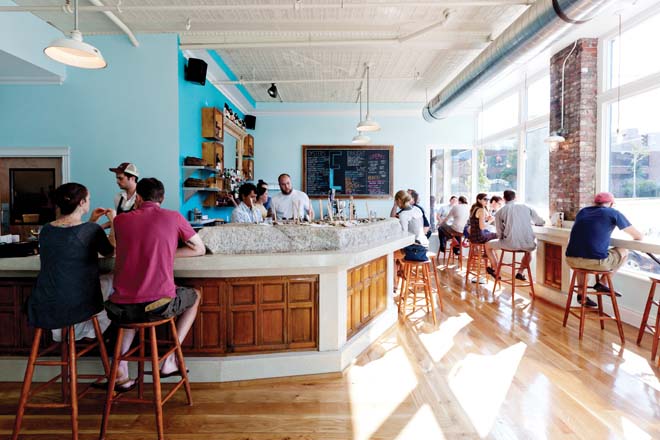 The restaurant is open from 11 a.m. to midnight daily. 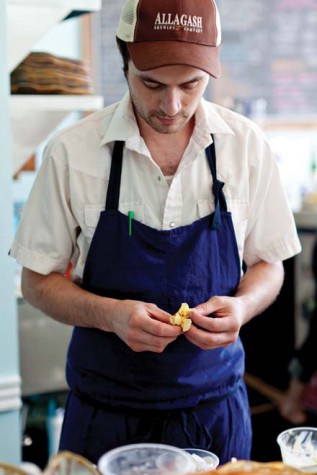 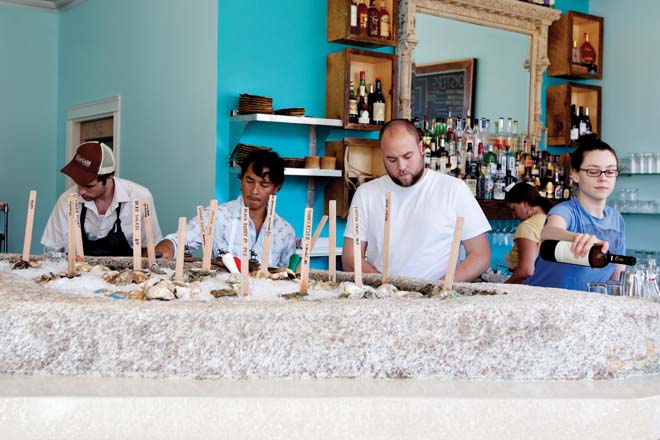 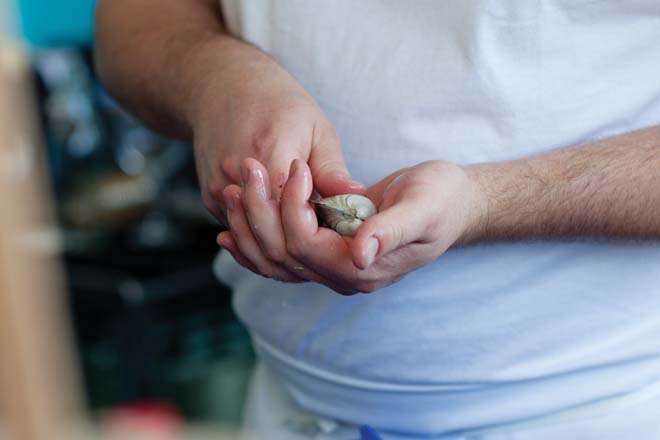 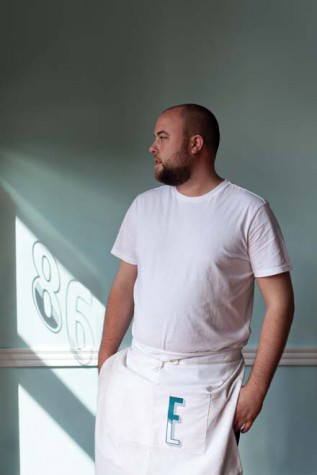 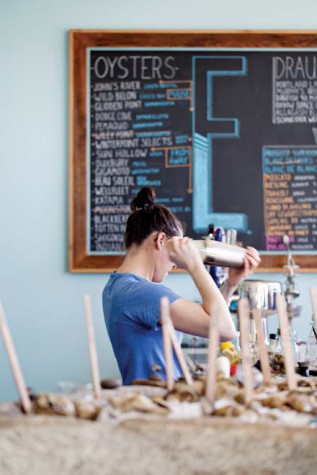 Nothing chases an oyster better than a celery gimlet.

A staggering array of fresh oysters is only the beginning at Portland’s newest seafood destination, which serves up traditional and modern fare as you have never experienced it before.

Now perched at said “sushi” bar, staring down an antique, stainless-steel hotel pan that was reserved, in a past life, for steaming whole fish and that is lined with seaweed and a plentiful arrangement of oysters from all over Maine, I understand the connection. There are many elements at work here. Gustatory accoutrements run the gamut from the traditional cocktail sauce to a frozen kimchi “ice” created from the spicy, fermented cabbage served next door at Hugo’s. Much like a sushi bar, a sheet of paper displays the evening’s offerings and their origin, and provides space for guests to pencil in the quantity of oysters they desire.

Smith, Wiley, and Taylor have created what I would consider to be a spare, modern environment. Brightly colored blue walls, accentuated by an overwhelming amount of natural light pouring in through massive windows (to the point that the bartenders are often seen wearing sunglasses before darkness falls), heightens the mood at Eventide. At night, these same windows shine like a beacon of light, illuminating the entire block and reminding hungry travellers that sustenance is not far away. Easily one of the most impressive features of the bar is its centerpiece, a giant hunk of granite that has been carved out and filled with ice to proudly display the myriad species of oysters available to patrons on any given day. The bar itself is poured concrete that has been incorporated with sand from Scarborough Beach, which I deem a fitting surface for resting my Walking Dead cocktail, a tiki-style drink that is as slow moving and inevitably lethal as its namesake.

According to Smith, the restaurant’s crudo dishes are almost as popular as the oysters, and standouts include a lightly cured arctic char served resting in a small pool of raw egg yolk, and topped with creme fraiche, piquant capers, and sweet, briny salmon roe. The dish is then garnished with “fried bagel.” Equally impressive is the buttery Tuna Nicoise, a raw piece of fish crowned with a garnish of chopped hard-boiled egg and red-onion most commonly found on caviar, and further complimented with a wonderfully salty and sweet taste imparted by dehydrated black-olive powder.

The drink menu, prominently displayed in its entirety on a chalkboard lining the west wall, requires a modicum of trust in the bartenders, as do the wines, which are listed only by their varietal and country of origin. They do not shy away from obscure grapes, such as fresh moschofilero from Greece or the smoky, effervescent txakoli from the Basque Country. They serve these wines with confidence, understanding that the selections will properly elevate the flavor of the cuisine. One of the elements that truly separates Eventide from most Portland eateries is its reverence for well-made sherry, a classic pairing with oysters. In fact, sherries are given their own special corner of the board. A range of high-end liquors, with a special emphasis on quality rum, is offered both on it’s own or in one of many cocktail offerings.

Menus are cleverly printed on newspaper, often doubling as a grease-absorbing raft for cooked appetizers such as the Battered Gulf of Maine Hake, in which the fish is lightly pickled before being enrobed in yeast batter and deep-fried to airy, golden perfection. There is no better partner for this kind of food than a bitingly cold Portland Lager from Bull Jagger Brewing Company, which doesn’t overpower the combination of fried hake and smoky, paprika-spiked house tartar sauce.

Those who are averse to seafood also have options, including the same pristine-quality charcuterie served at neighboring Hugo’s, in addition to a delicate yet rich roulade of game hen. For some who may not prefer to consume raw oysters, Eventide offers larger, meatier oysters grilled and prepared in the style of Korean barbeque.

Due to the considerable volume of lobsters the restaurant serves, there is a staggering amount of carcasses available for stock. Eventide therefore uses a much more concentrated reduction, which produces a damn good bowl of lobster stew possessing an intensity of flavor I have seldom encountered. It comes as no surprise that most of the meat that doesn’t end up in the stew goes into Eventide’s signature lobster roll, which is served on a steamed Japanese-style bun, available with a choice of hollandaise, mayo, or brown-butter vinaigrette. Also served with the fried oysters, the bun has that stick-to-the-roof-of-your-mouth yumminess reminiscent of the peanut-butter-and-jelly sandwiches your mom used to make.

Even seemingly mundane side dishes, such as baked beans, receive an inordinate amount of care and detail. Wiley and Taylor taste-tested a multitude of varieties before settling on Swedish brown beans, which they simmer with sizable chunks of pork belly. A majority of the offerings arrive on oyster-adorned ceramics that were designed by Smith’s friend, Alison Evans.

For those in search of something a bit more substantial, the traditional New England Clam Bake may be the most comforting option. It arrives housed in a bamboo steamer, bursting with clams, mussels, lobster, potatoes, house-made salt pork, and a solitary boiled eggan old-school method for determining whether seafood has been properly cooked. Diners are encouraged to attack the feast without the aid of flatware and “get their hands dirty.”

Since its inception, Eventide’s patrons have decimated thousands and thousands of oysters, shattering any expectations from both the owners and the oyster farmers who keep the restaurant stocked. Some harvesters, such as Winter Point in West Bath, have even committed specific “select” oysters exclusively for consumption at Eventide. Each day, the restaurant continues to attract crowds from lunch through dinner. Smith, Taylor, and Wiley may just have figured out what Portlanders want most.