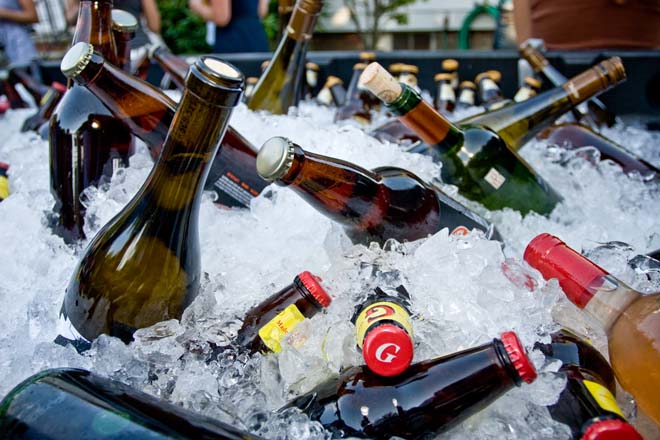 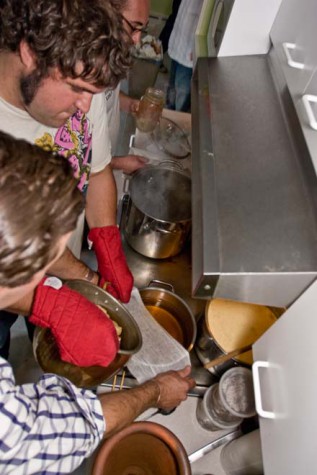 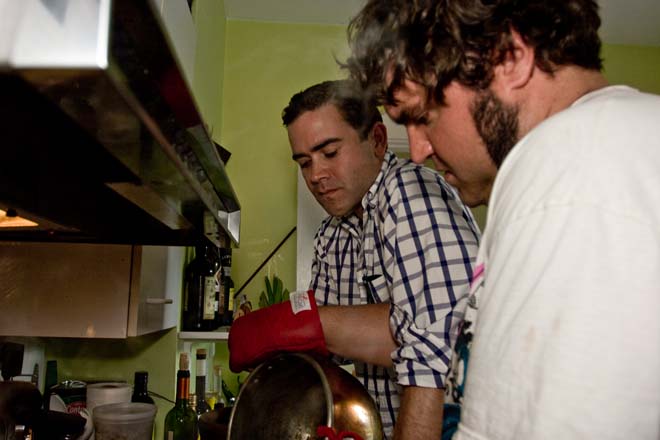 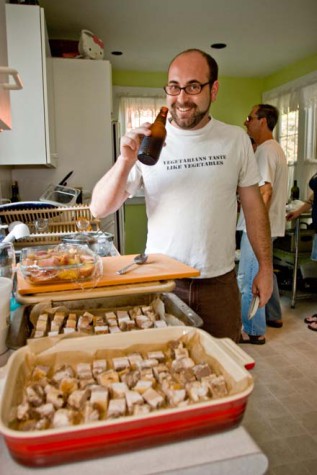 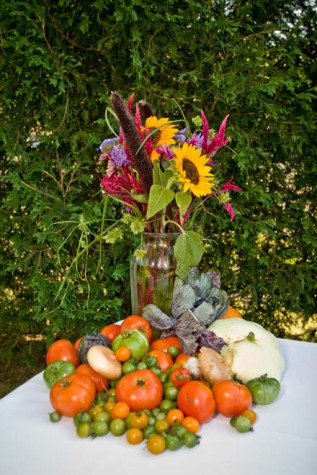 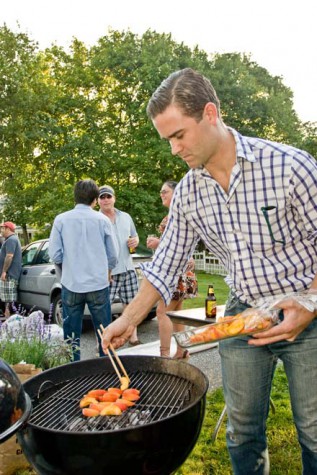 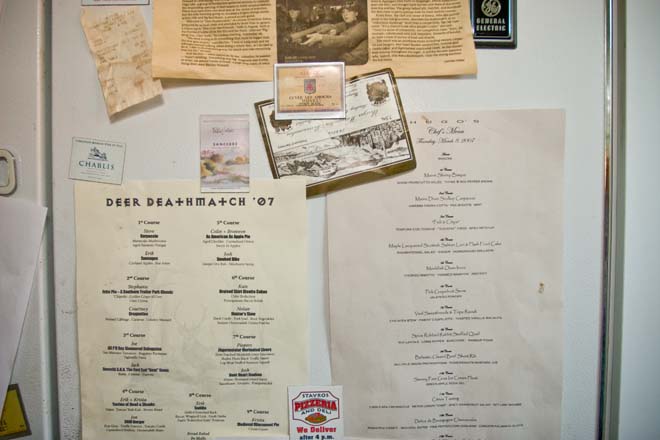 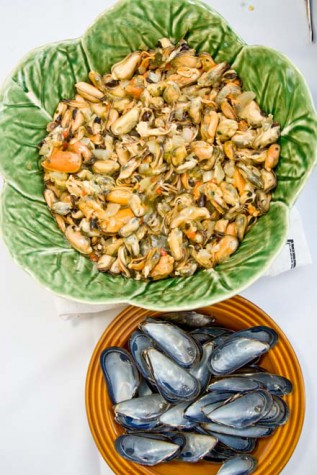 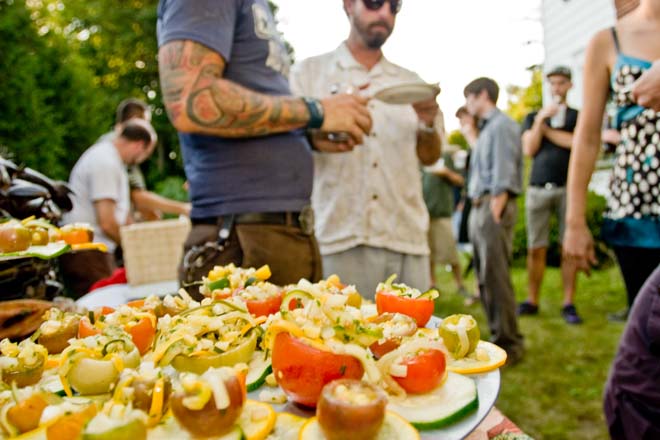 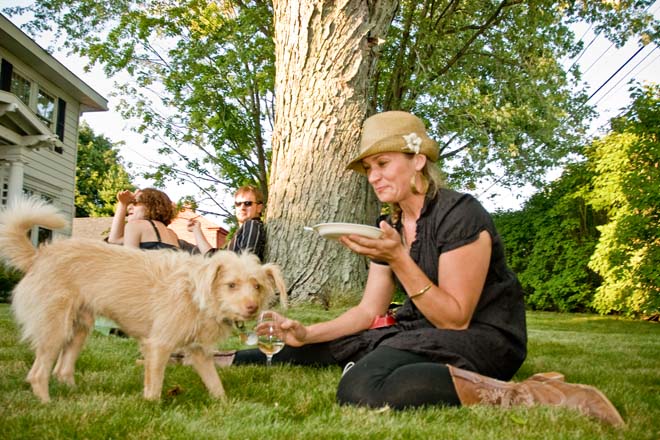 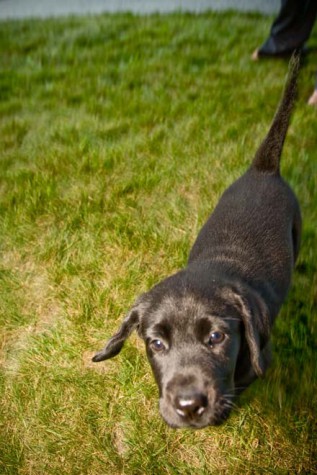 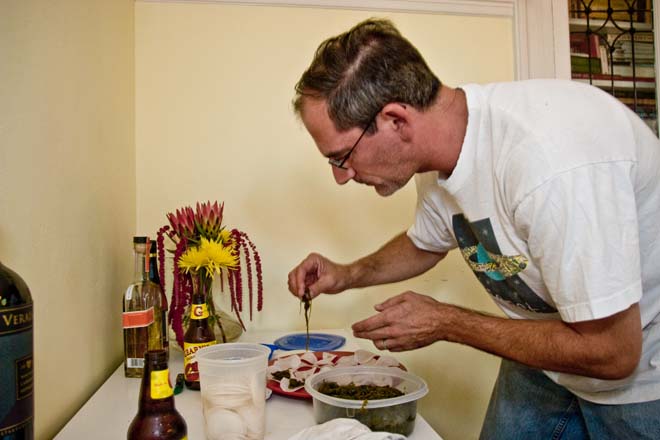 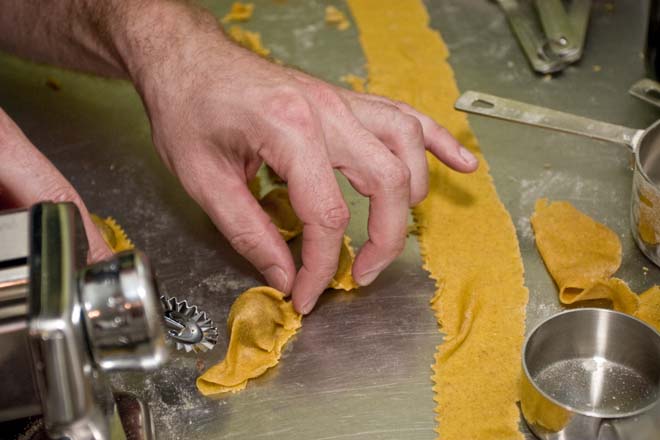 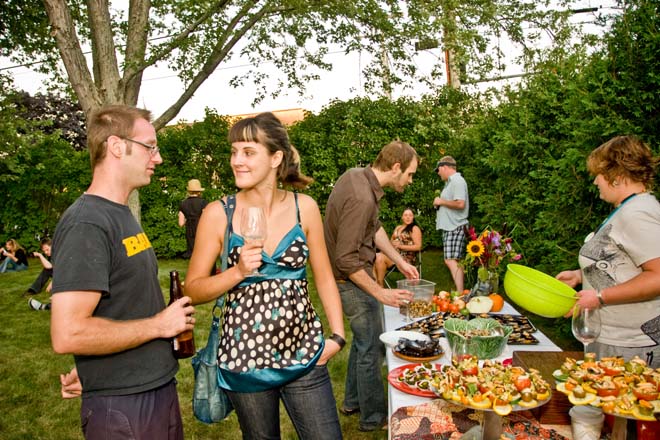 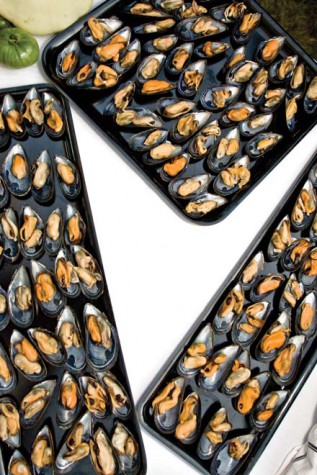 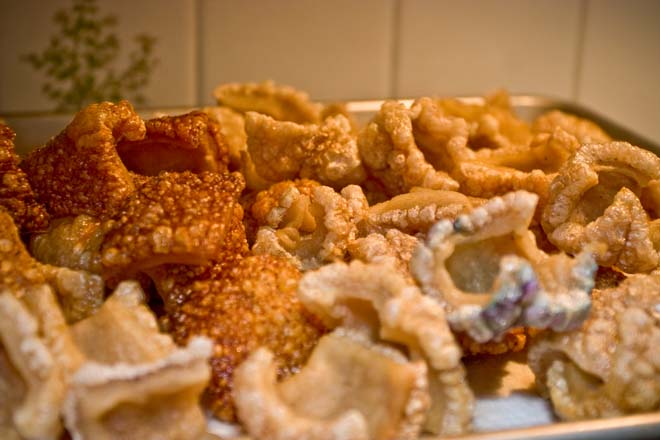 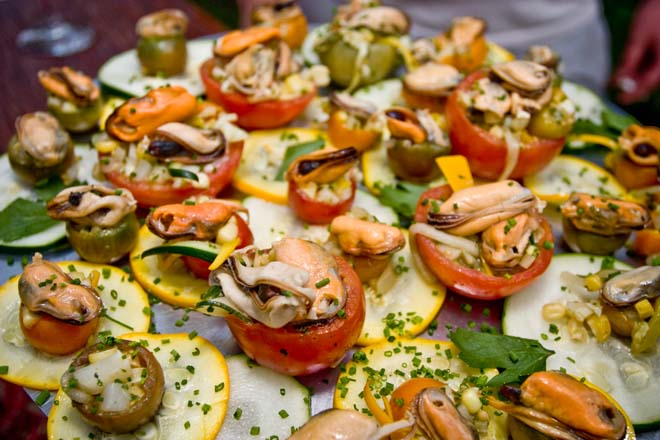 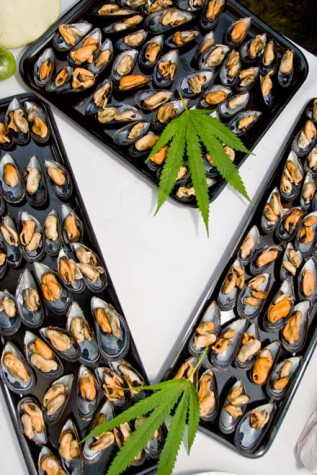 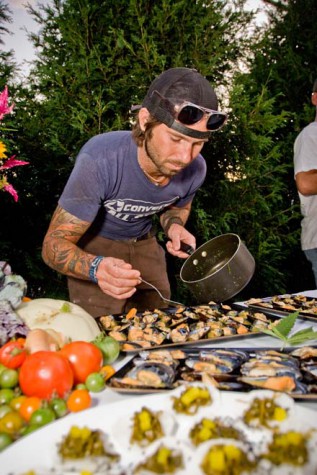 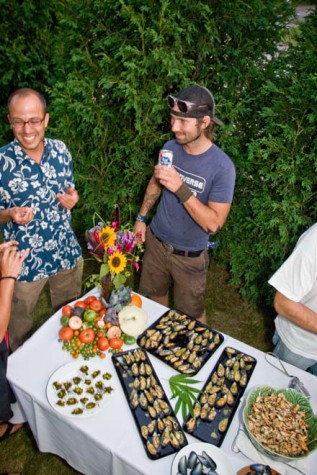 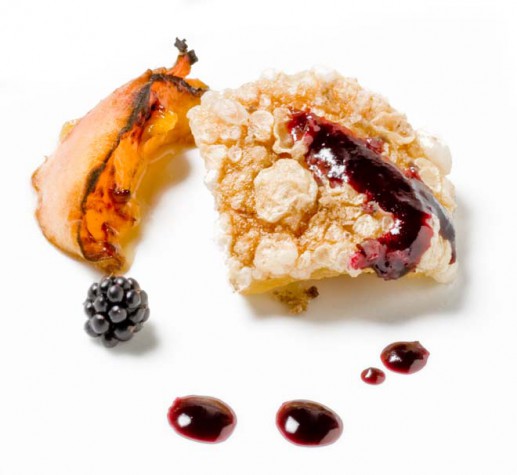 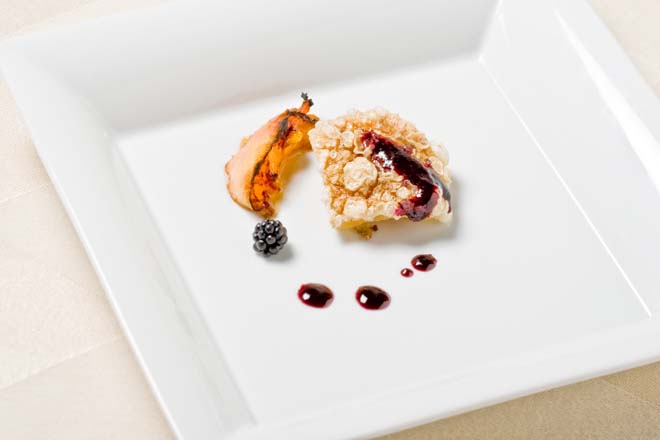 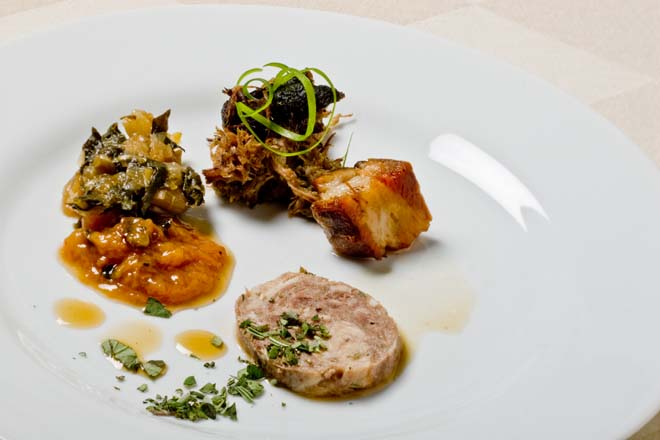 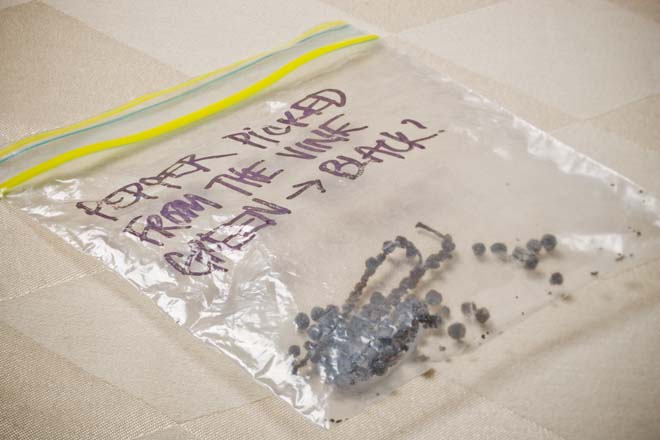 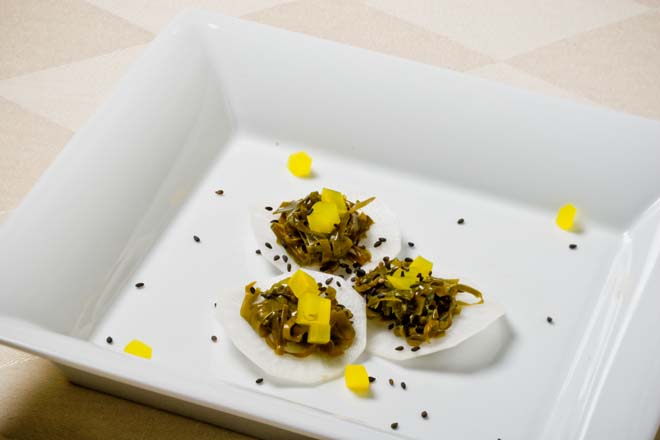 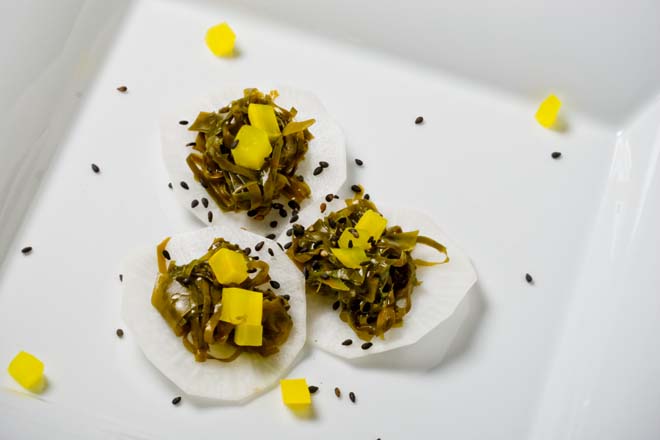 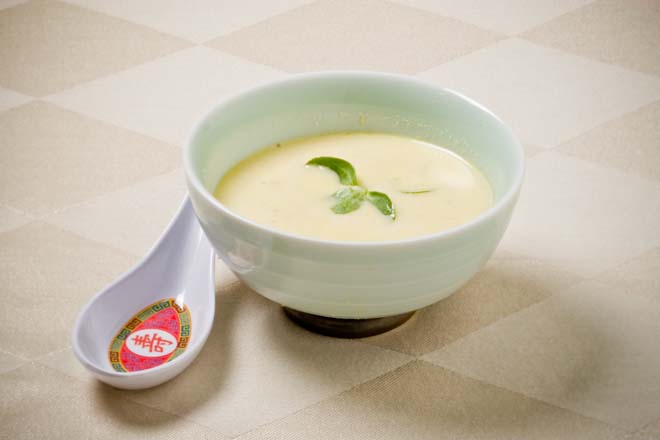 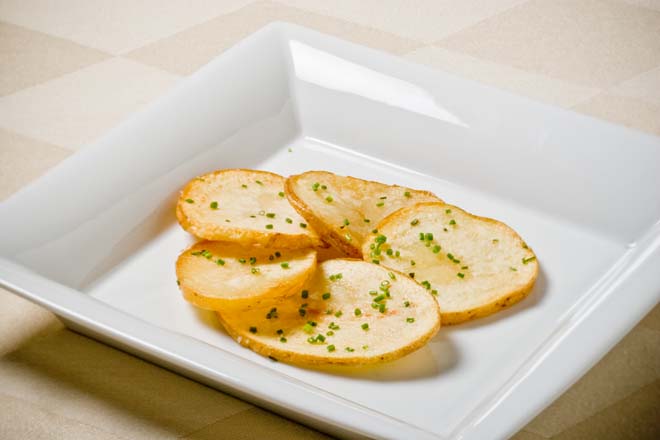 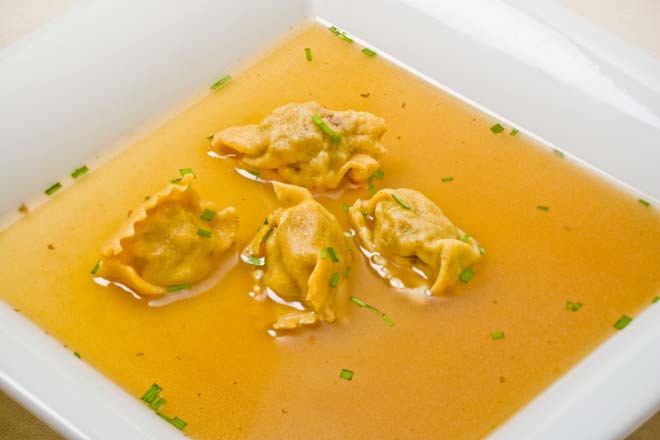 Sun warms the last Sunday in August. Labor Day has arrived early and the balmy afternoon begs for some sort of celebration.

A half-ton Ford pick-up, its bed mounded over with ice, backs into Joe Ricchio and Jon Dietz’s driveway not far from Portland’s Back Cove. In goes a keg of hard cider, bottles of red and white wine, and cases of High & Mighty beer and Geary’s Summer Ale.

Tables are arranged in the backyard as guests begin to arrive. A battery of chefs, each responsible for one course, rush about with an air of calm chaos. Not far from the pick-up’s tailgate, Jack Spencer hovers over the barbeque and flips his grilled peaches with a pair of chopsticks.

Inside, half a dozen cooks crowd the small kitchen, elbowing for counter space. Laughter rises over the music. Dietz, Robert Pieper, and Patty Heggarty lurch through the complexity of venison ravioli en brodo. Ricchio’s sweet corn chowder, made with homemade ancho chili powder and bits of braised duck, bubbles on the back-burner of the jam-packed stove.

These are serious gourmets who don’t take themselves too seriously. This is Deathmatch.
Ricchio—a self-described wine-seller, bartender, sommelier, stand-up comedian, and unabashed food-lover—staged the inaugural Deathmatch at his home in August 2007. “I woke up one day and decided I wanted to have a dinner party that would serve so much fois gras that people wouldn’t be able to eat it again for a year,” says Ricchio. The underground, invitation-only culinary phenomenon was the brainchild of Ricchio and his friend Dietz. Guests would enjoy not only wine pairings to complement each coarse, but also aperitifs, local microbrews, and after-dinner drinks.

According to Ricchio, the evening was dubbed Deathmatch because “it was designed to take five years off your life expectancy. It’s all about decadence,” he says with a wry smile.

Deathmatch quickly came to include a hardcore band of food professionals—chefs, servers, wine specialists, and wholesalers—and a coterie of their friends: food lovers with tastes and appetites of Rabelaisian proportions. In the year since that first homage to the complex mystique of goose liver, there have been four subsequent Deathmatches: Fois Gras was followed by Venison, Japanese Cuisine, Bizarre Foods of Maine, and now, on this Sunday before Labor Day, the theme is Grow! Kill! Forage!
In the kitchen, an iPod playing old-school punk is drowned out by Billy’s Idol’s “White Wedding” blaring from a much larger sound system in the living room. Ricchio dons large red oven mitts and grabs a copper pot seething with rendered fat. Spencer begins frying his chiccarones, or pork rinds. “It’s the only fried thing that is actually made healthier by frying,” he laughs.

Around the house, chefs, servers and bartenders from popular Portland culinary destinations—Browne Trading Company, Evangeline, Five Fifty-Five, One Fifty Ate, Ri-Ra, and Vignola—rush about.
The Deathmatch chefs have been challenged to use only ingredients they have grown, killed, or found themselves. One degree of separation is allowed, so participants could gather ingredients from friends, loved ones, or even the occasional stranger—if they interpreted “forage” to mean “pilferage.” Let it suffice to say that gardens were raided.

John Dennison, a photographer and food blogger, has cooked at all but the inaugural Deathmatch. This year, he partnered with Josh Potocki and Kate Squibb to form the Picket Street Posse, a nod to Potocki’s South Portland bistro, One Fifty Ate. Dennison gathered more than sixty pounds of Bangs Island mussels for the Posse’s three delectable dishes. Potocki cooked Moules Verts avec Beurre de Dent Douce, enhanced with home-grown transformative herbs. Cap’n Kate Squibb, an urban pirate who took foraging to a new level in her neighborhood, offered Swashbuckled Mussels with Purloined Vegetables. And Dennison himself prepared Mussels Andalusian Style.

The driveway quickly fills with guests who immediately gravitate to the pick-up full of libations like gourmands to a five-star restaurant. The warm weather has brought out flimsy sundresses, a cacophony of tattoos, and many a pair of cowboy boots. The screen door on the kitchen slams shut once again, threatening to fall from its hinges. “Wow, that’s a step up,” says Stephen Souza, a bartender at Vignola, as he motions to the stacks of stemmed wine glasses.

Dick and Beverly Stewart watch their son Nolan as he prepares Pork Three Ways with Brad Messier. Dick, a committed vegetarian, looks on with obvious pride at his son’s handiwork as he sips from a glass of merlot, enjoying the night.

Four-legged guests make the most of the evening, too. Raleigh is a randomly bred Canine-American who lives with Don Lindgren and Samantha Hoyt Lindgren, the owners of Rabelais Books in Portland. He works the crowd like a seasoned pro, foraging for treats with casual insouciance.

Near a table overflowing with heirloom tomatoes from Broadturn Farm in Scarborough, Selena Juneau-Vogel is recounting her recent trip to India. “I didn’t bring much back with me, but for some reason I gathered these outside a small village,” she says while holding aloft a plastic bag full of short black twigs and a smattering of black kernels. She has produced an impossibly rare Grow! Kill! Forage! ingredient: black pepper. “It’s the one ingredient I thought we wouldn’t see here,” says Spencer with a look of awe. “Hey, you distract her and I’ll steal her pepper,” says a disembodied voice in the crowd.
Watching these culinary professionals work within the confines of the evening’s strict rules explodes the old cliche that chefs go home and open a can of Spaghetti-O’s after a rough day’s work. It is obvious that these chefs love nothing more than embracing the thrill-inducing and thought-provoking challenge this event has come to represent.

At dusk, the mosquitoes swarm, but these backyard gourmets are not deterred. Revelers queue for the next offering, salivating in anticipation, heedlessly slapping their forearms and legs. The final courses are served in candlelight and moon-glow.