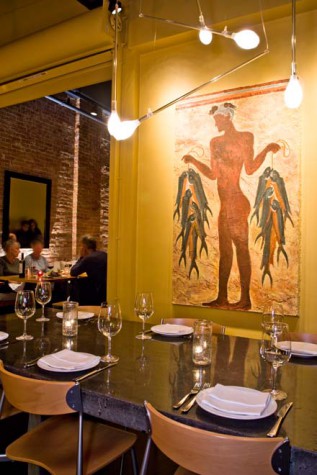 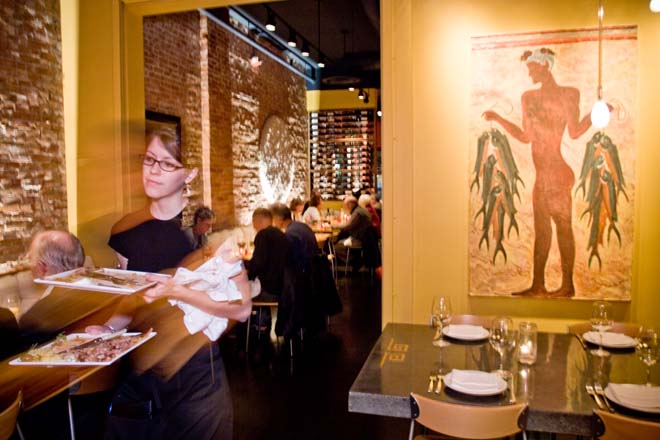 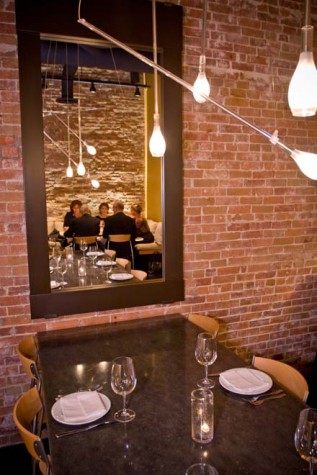 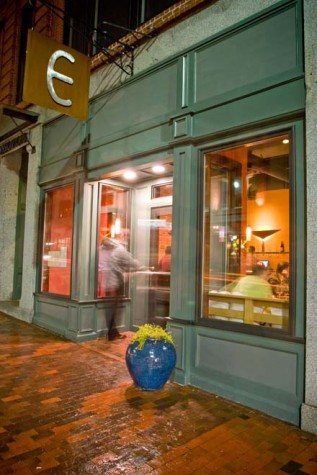 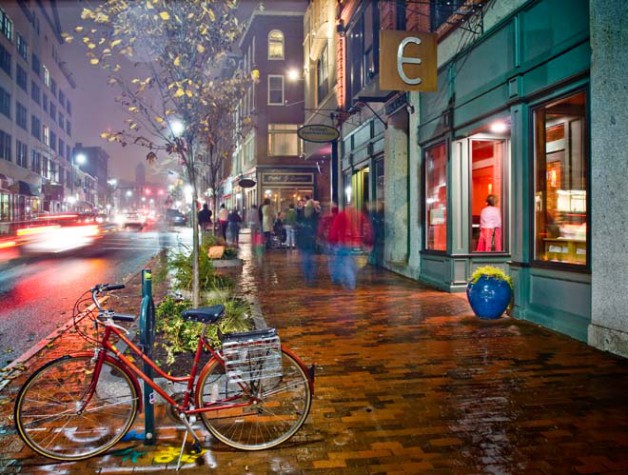 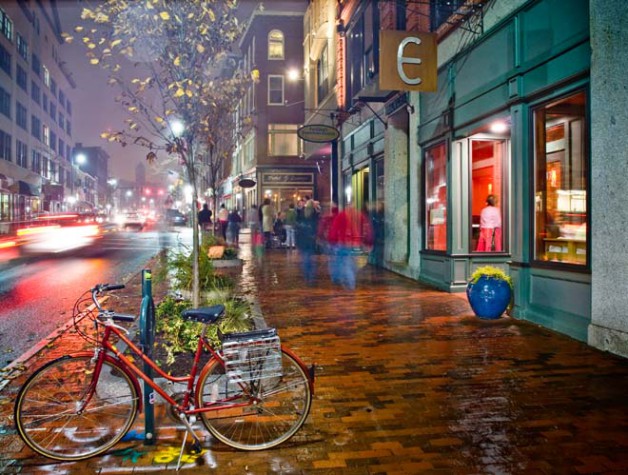 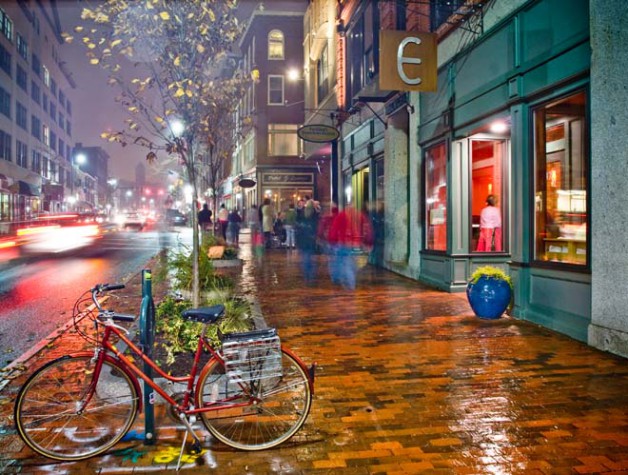 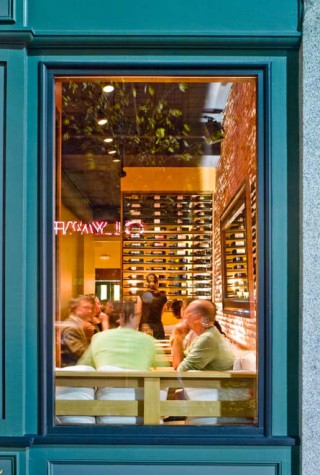 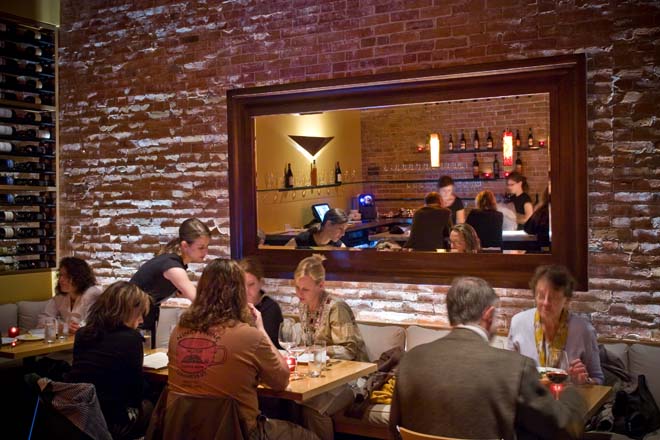 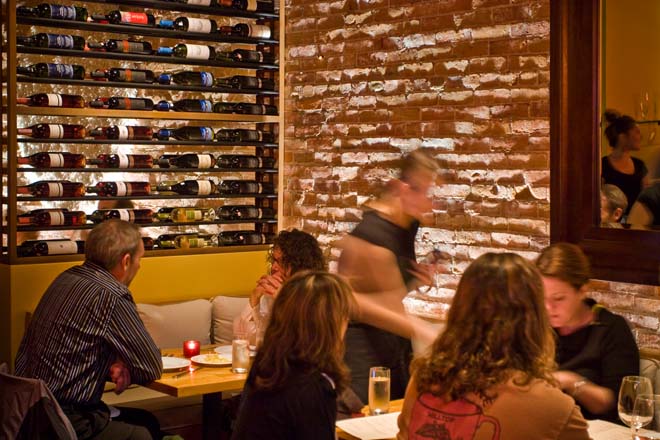 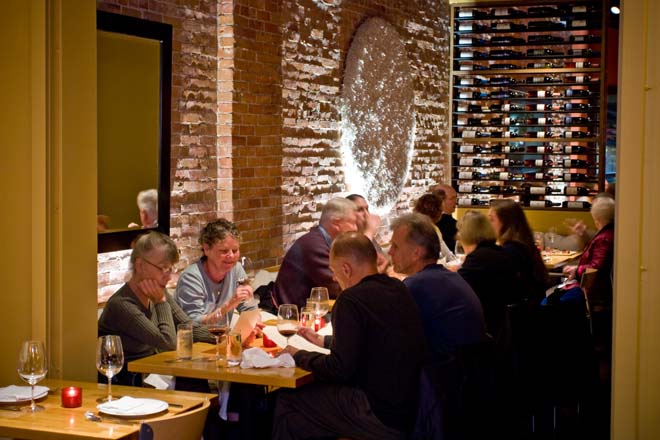 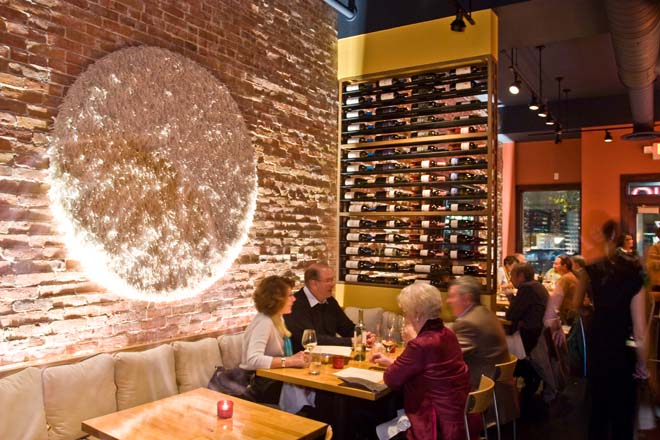 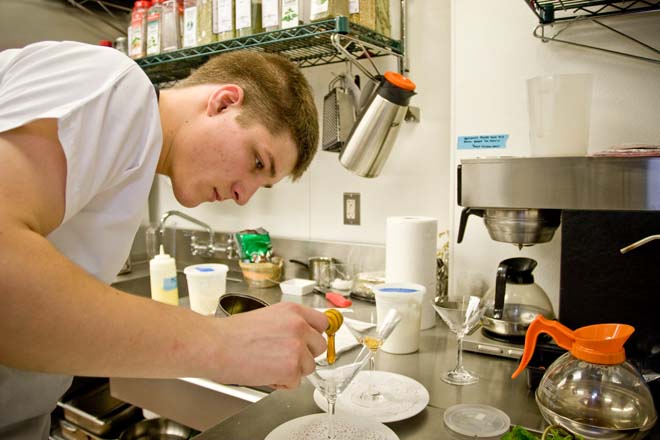 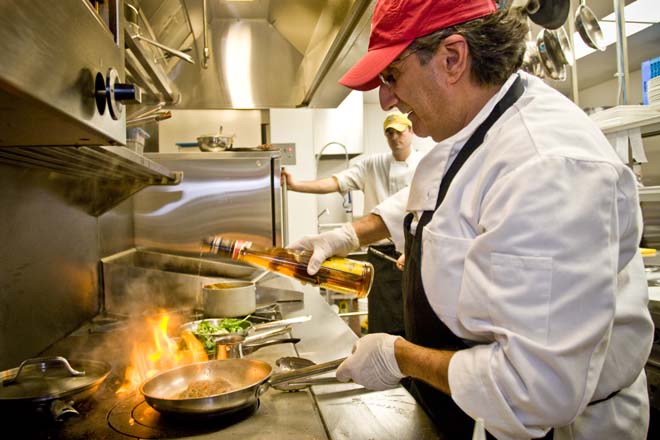 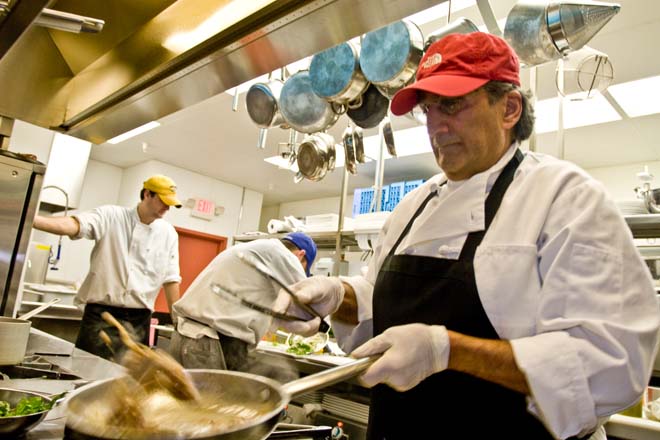 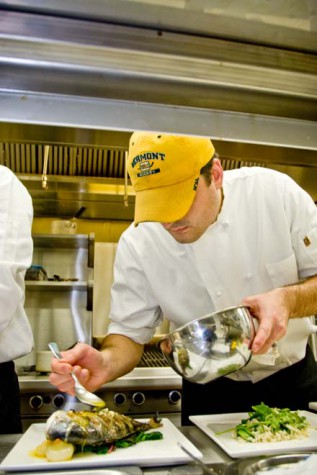 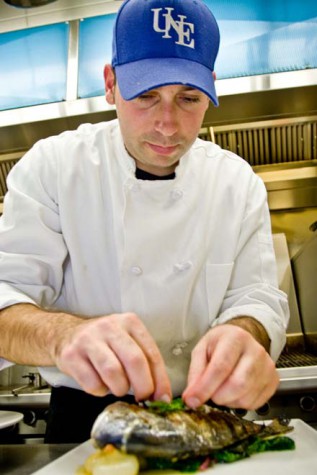 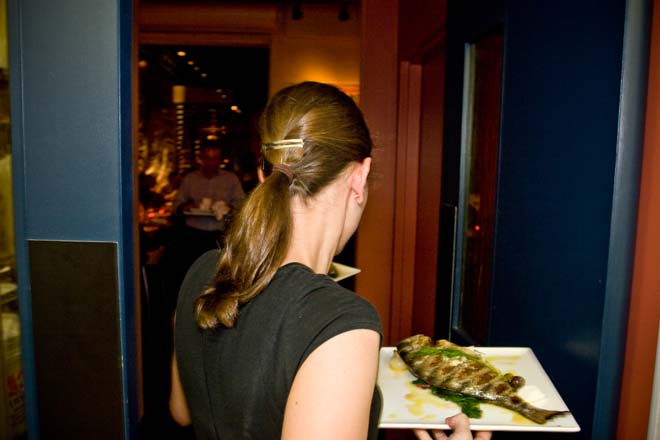 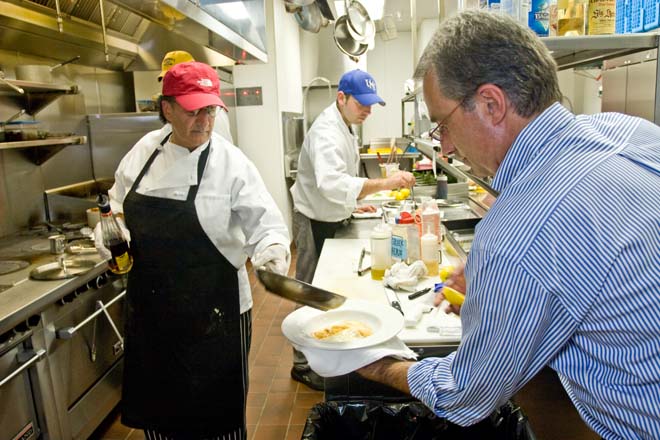 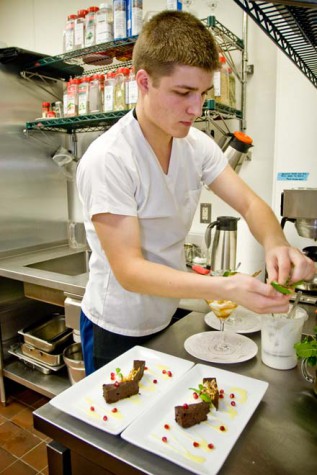 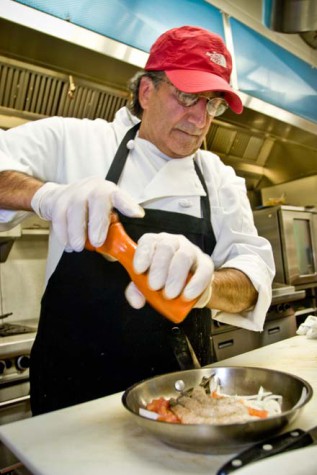 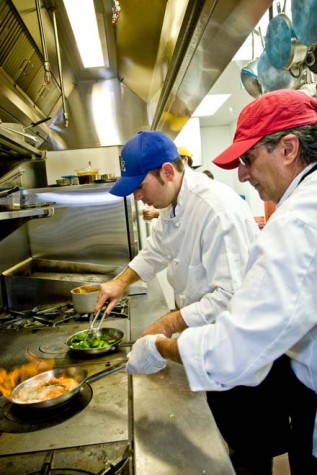 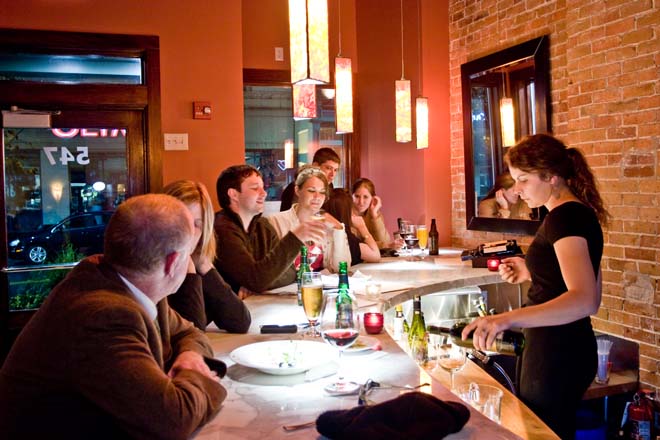 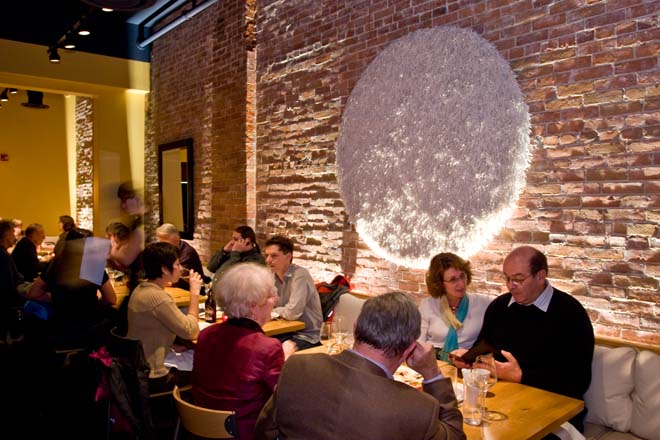 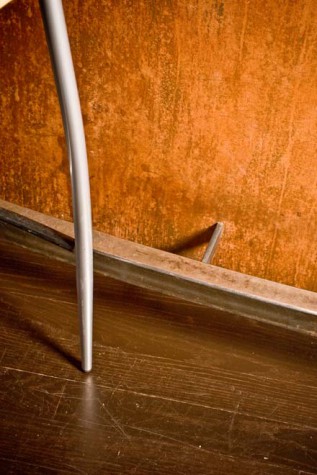 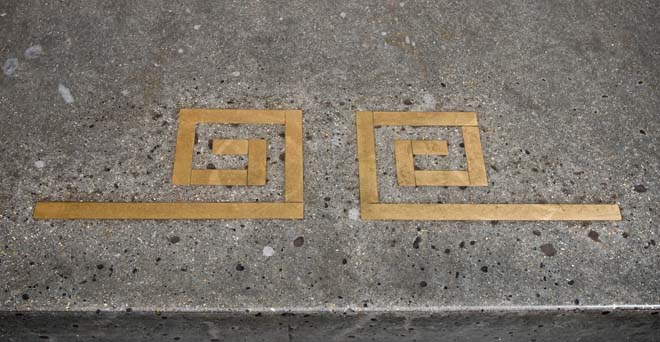 In the quiet morning hours, sun pouring through the front windows, Emilitsa slowly comes to life. In other restaurants, sunlight serves only to highlight small imperfections; these are places better seen at night, illuminated by the soft glow of candles or dimmed lamps. But Emilitsa, one of the newest additions to Portland’s flourishing culinary scene, basks in the unforgiving brightness like a beautiful teenager—flawless, unconsciously confident, and gazing upon a future of boundless potential.

The decor, like everything about the restaurant—from food to wine to staffing—is the result of a thoughtful collaboration between the Regas brothers, John and Denos. It is also a loving tribute to their Greek heritage. Though they have family ties to the restaurant business—their father was the proprietor of a cafe in their hometown of Duluth, Minnesota—the brothers are nonetheless unlikely restaurateurs.
“At age 5, I was peeling potatoes for a penny apiece in my father’s cafe,” recalls Denos. “We worked in the kitchen until we were in high school; I couldn’t wait to get out of there.” After school, the brothers became highly skilled pipefitters and union welders. When the national economy slowed down and work was scarce in Minnesota, they were forced to look farther afield. In the early 1980s, the brothers jumped at the opportunity to work on the newly designed Seabrook nuclear plant in New Hampshire. “It felt like moving to Florida,” says John of the relocation. “The winters were milder than Minnesota and we loved being near the ocean and the mountains.”

The two transplants thrived in their adopted home. After the Seabrook project was completed, John worked as a medical-equipment service mechanic, while Denos forged a career in corporate management. All the while, however, John dreamed of one day owning his own business, while Denos rediscovered an interest in cooking and enrolled briefly in the renowned Culinary Institute of America in Hyde Park, New York, to study Mediterranean cuisine.

As Denos honed his skills in the kitchen, John began his quest to open a high-end Greek restaurant. His work took him from Boston to Portland and through the many cities and towns in between. He spent his time on the road researching restaurants, real estate, and dining trends everywhere he went. “Finding the right location was key,” says John, who considered Boston and Portsmouth, New Hampshire, before discovering their Congress Street location in the heart of Portland’s Arts District. The space had been empty for years, while luxury lofts were being built on the floors above street level. “I knew Portland was the right place,” says John. “It’s just a great restaurant town, but there has never been any place that served beautifully prepared, authentic Greek food. I had reached a time in my life where I just had to do this.”

His plan had been carefully laid over decades, but it all hinged on his older brother’s joining him as chef. “I wasn’t prepared to do it without Denos,” he explains. “He brought skill and experience I just didn’t have.”

The design of the long, narrow space flanked by aged brick walls called upon all of the brothers’ diverse talents and skills. They created a banquette—crafted of pale wood, upholstered in beige linen, and lit from behind—that runs the length of the room from the bar area in front to the kitchen in the rear. The pair also designed and built the serpentine bar, the base of which is riveted Cortin steel, which forms a mottled rust-brown and green patina as it ages. The three-inch-thick Calcutta marble countertop—soft white with gray and gold veining—curves sinuously along its length. “We spent hours at the drawing board, trying to figure this out,” says Denos.

Emilitsa is their affectionate diminutive for Emily Regas, their mother. “When we opened, we finally realized what a gift our parents gave us,” says Denos of their childhood. “We wanted to recreate the kind of food we grew up with.” Which means, of course, using the finest ingredients and importing as much as possible directly from Greece. “We’re first generation,” explains John. “Our recipes are true to traditional Greek cooking; they haven’t been adulterated.” They knew they were onto something special when several customers who had spent time in Greece told them that eating at Emilitsa was like being back on the Greek islands.

Motivated by the belief that Greece should also be the source of the restaurant’s wines, John Regas set out to find the best imported Greek wines available. After sampling hundreds, he whittled down the list to thirty-five exceptional red, white, rose, and sparkling wines. Since the waitstaff has extensive training in wine pairing and selection, they gladly help customers find the perfect complement to any dish.
Transcending even the importance of fine cuisine and beautiful decor is the brothers’ unwavering belief in the Greek concept of philoxenia, a value they both strive to infuse into every aspect of their new venture. “It means, literally, befriending a stranger,” says Denos of the Greek word for hospitality. “It’s how we were brought up.” Imbued with the traditions of their youth, the restaurant is an homage not only to their parents’ recipes and cooking, but also to their spirit of welcoming generosity.
As John Regas warmly ushers diners into a room that represents the embodiment of a long-held dream, his brother Denos is in the kitchen preparing the authentic dishes of his childhood. Each dish is an artful display of his skill, his heritage, and the spirit of philoxenia.