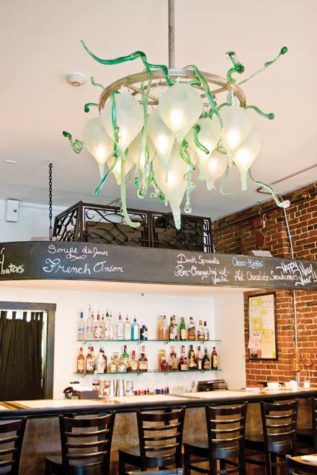 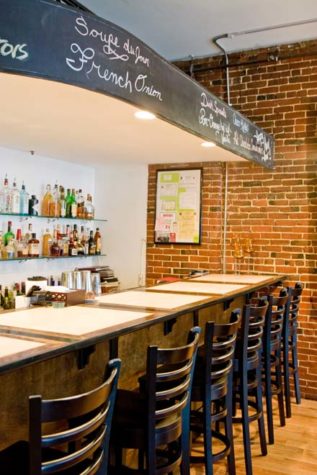 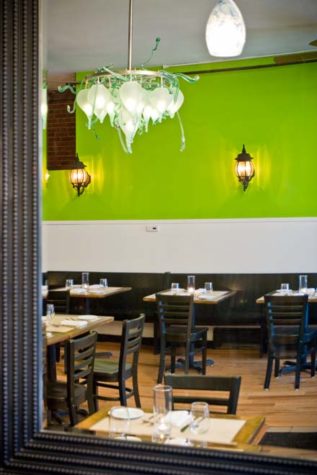 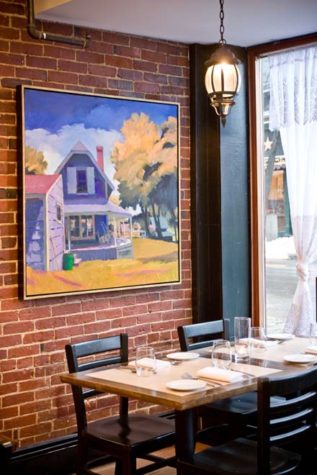 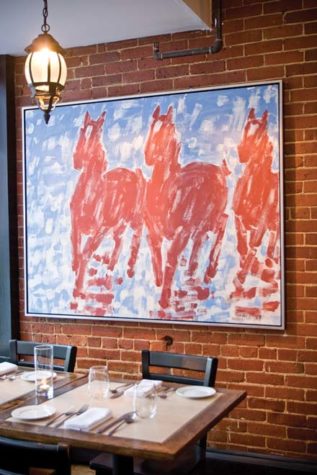 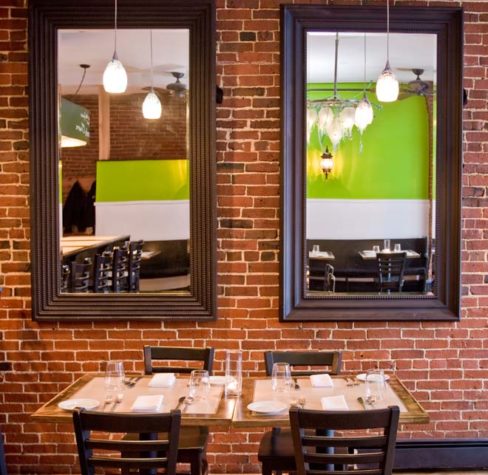 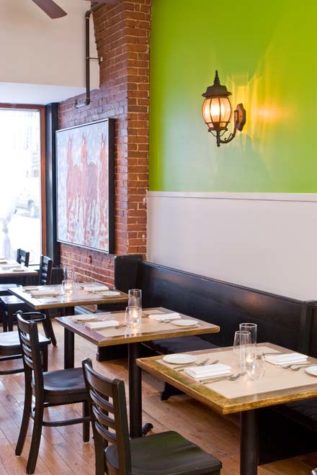 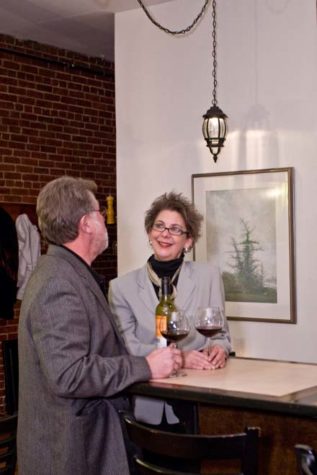 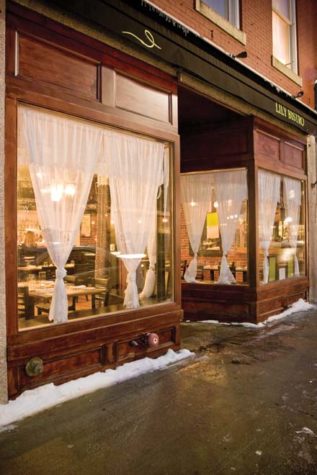 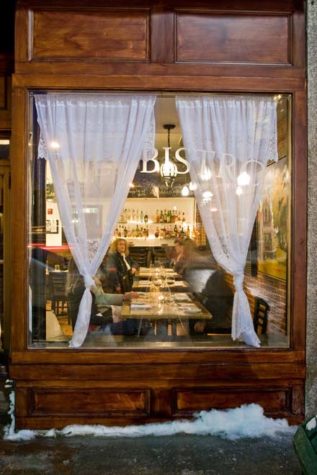 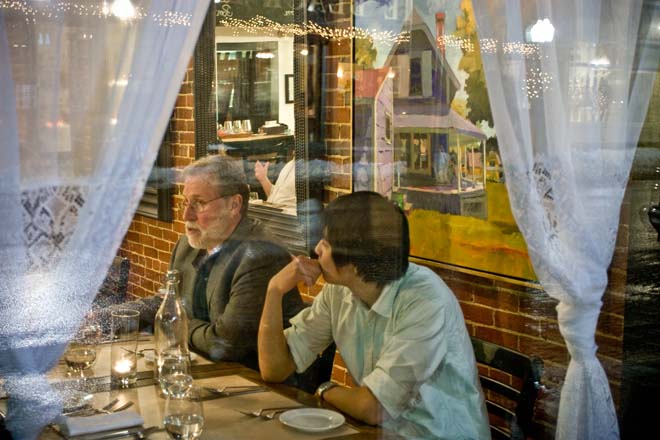 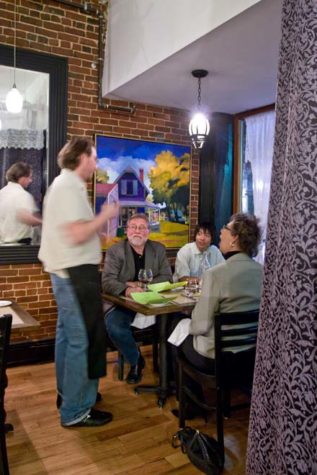 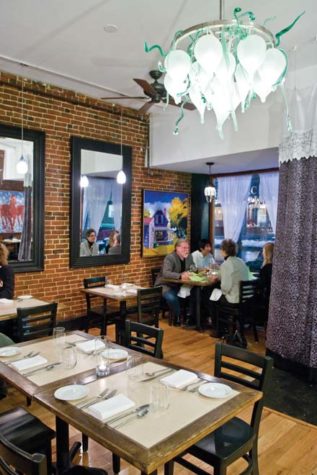 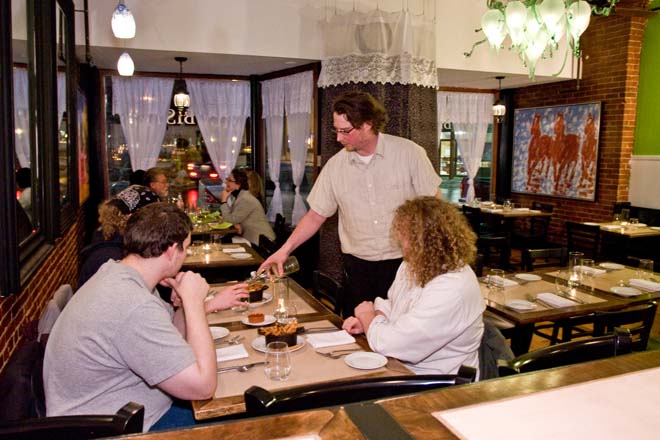 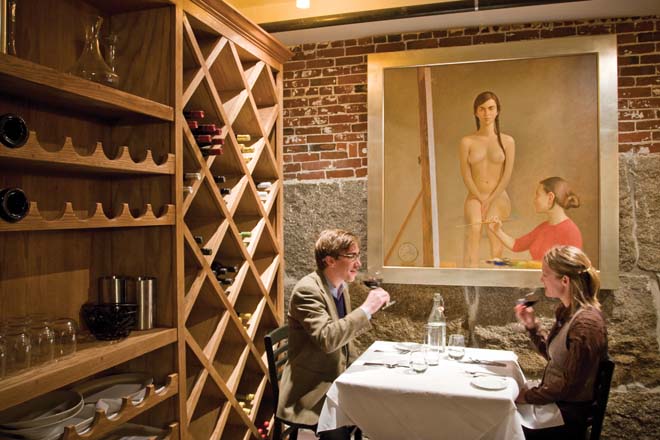 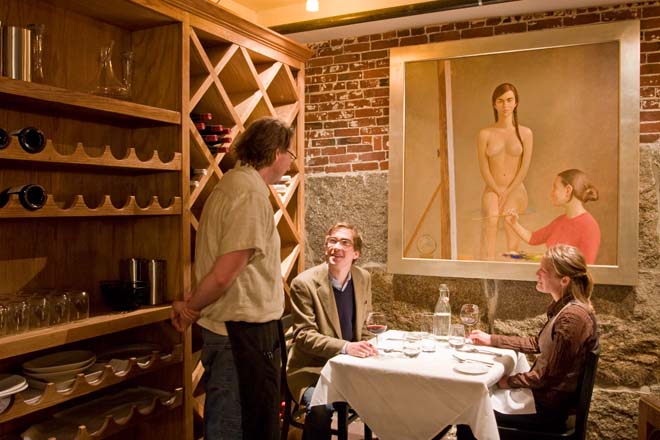 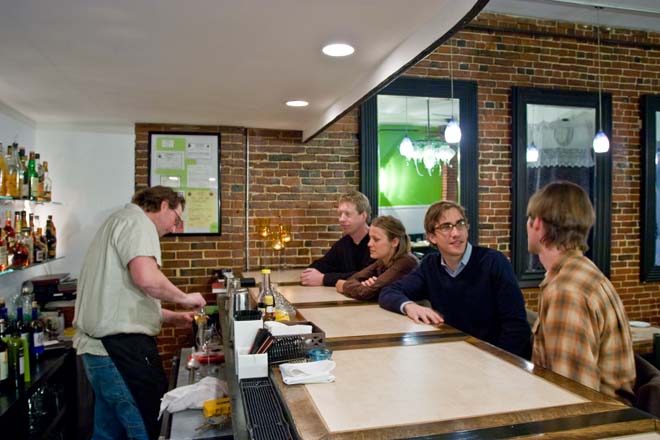 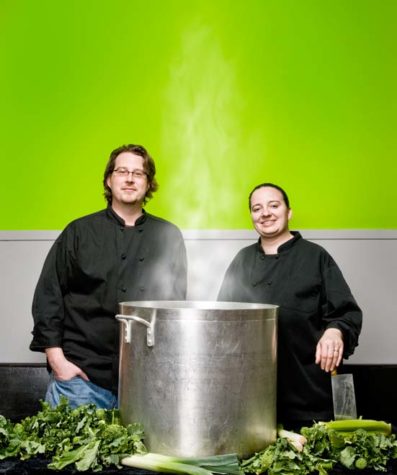 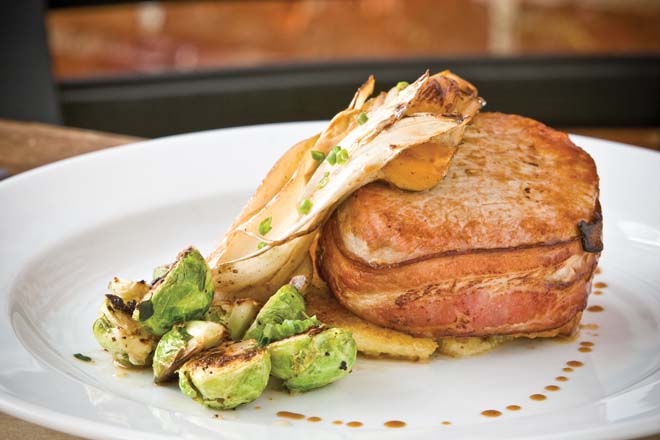 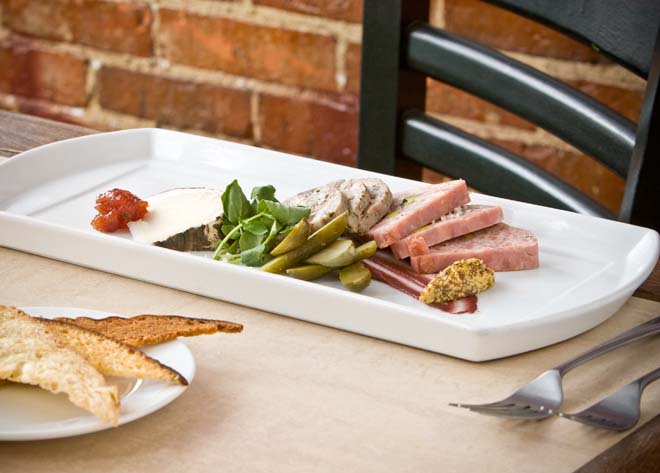 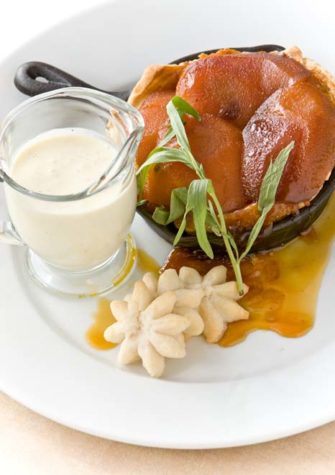 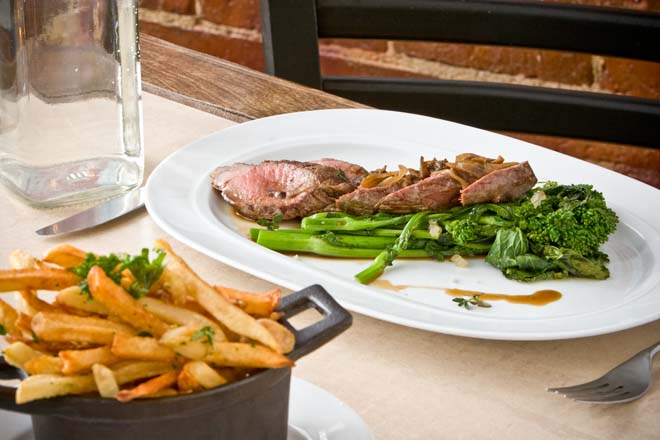 Two tiny hands and a giggling “hi” emerge from thick drapery at the entrance to Lily Bistro in Rockland. Into full view comes 18-month-old Shawn, a miniature maitre d’ in training, who welcomes us inside. His parents, owners and chefs Lynette Mosher and Robert Krajewski, laugh in the background. “That’s his job,” jokes Lynette.

It is late morning on a Friday, several hours before the local weekend dinner crowd will turn up to sample the Main Street bistro’s sophisticated French fare with a New England twist. For now, toys lie scattered on the floor, and Lynette and Bob, who have been together since they met at Johnson & Wales University in the late 1990s, radiate a calm energy as they transfer Shawn from one hip to the other before he falls asleep for his nap. The couple has mastered the art of balancing family and profession, just as they balance responsibilities within the restaurant: Bob handles the front-of-house duties and tackles the bread, stocks, and cocktails, while Lynette heads the kitchen. Their menu—abounding with local fish, produce, meat, and dairy—changes daily, with one essential constant: steak frites.
While also working as instructors at the New England Culinary Institute in Vermont, the pair’s culinary expertise was honed over the years in the kitchens of nearly twenty restaurants in the Boston area, including Olives, Clio, Radius, Biba, Pignoli, Chez Henri, and Pigalle. Much of Bob’s inspiration comes from Lydia Shire of Biba and Pignoli. “I really hold on to the fearlessness she had when putting food together and try to break away from the kind of paradigms that say you can’t do cheese and fish together, or that you can’t serve white wine with meat,” he says. Bob remembers first becoming enraptured with cooking when his father was enrolled at Johnson & Wales and would bring home food he had experimented with in class.

Fearlessness is a hallmark of Lynette’s culinary style as well. Her approach is to put together the same family of items—bulbs, for example—to bring out different nuances of flavor, particularly with vegetables. “The saying is ‘if it grows together, it goes together,’ but I have learned that if it is in the same family, it goes together just as well,” she says. This realization was the birth of a new model of cooking for Lynette, who now combines ingredients such as leeks, garlic, onions, and asparagus. “I love it when flavors taste familiar to people, but they aren’t sure what those flavors are exactly.” Complemented by a short but carefully selected wine list, Lynette’s moules Provençal, steak tartare, veal blanquette, and seared halibut with smoked brandade feature herbs and vegetables grown in the couple’s own Rockland backyard.

Unlike most young families who move to Maine, the couple’s decision was the outcome of an unfortunate accident. In 2003, while Lynette was teaching at the New England Culinary Institute, she was in a car crash that broke one of her legs in fifty-four places. The couple soon moved to Portland to be closer to her trauma surgeon. “At first, I thought I could never be a chef again,” recalls Lynette. “Then I discovered that the hands-on teaching I was doing was just as strenuous, and if I could do that, I could do anything.” Soon after, the two looked to the midcoast region, where real estate was less expensive. The coveted location they eventually found on Rockland’s Main Street was almost too good to be true; the couple remembered seeing it for the first time many years ago and thinking then that it would be an ideal space for a restaurant. When they read in the newspaper that the property was available for lease, Bob was head chef of Natalie’s at the Camden Harbor Inn and Lynette was staying home with Shawn. Without hesitating, they called the landlord. “We weren’t really looking for another job, but we signed the lease and put down our own cash before our business loan was even in place. This is what we’ve always wanted, so we took a huge gamble,” says Lynette. Like many successful gambles, the payoff was worth the risk.

Though their relocation occurred partly out of necessity, the couple decided they wanted to raise their son in Maine, where they could feel part of a community. These days, they are not only members of the vibrant community of Rockland, but they are also part of the micro-neighborhood of Main Street. With four restaurants in close proximity and a flourishing art scene, neighborly collaboration is common. One busy Saturday night, Lynette ran out of steak and dashed to the restaurant across the street—in a few minutes she was back with an entire strip steak. Next door, the chefs from Suzuki’s Sushi Bar partnered with Lynette and Bob to create a seafood dinner at the James Beard House this past February. “The community of people in downtown Rockland is a great resource,” says Lynette. “In Boston, I don’t know if we would’ve been able to have these kinds of community relationships.” Down the street are the Dowling Walsh Gallery, which outfitted the restaurant with artwork, and the Farnsworth Art Museum and Wyeth Center. The relationship among these Main Street galleries and restaurants is symbiotic: both benefit from the additional foot traffic, while visitors enjoy having exceptional local eateries and art venues within walking distance of one another.

A LILY BLOOMS
Prior to its rebirth as Lily Bistro in the summer of 2008, the space belonged to the Mediterranean restaurant Amalfi. When it came time to redo the decor, Bob and Lynette looked to one of the signature ingredients in French cooking: garlic. “We came up with the idea of a scape and the design sort of developed around that,” says Lynette. The logo, designed by Lori Decato Metz of Idea Outfitters in Eliot, features a single looping scape, which is repeated in the bistro’s focal point: a custom chandelier created by Prism Glass in Rockport. The couple transformed the yellow walls into a lively lime green that they lined with luminaires reminiscent of the street-lamps that might be found in a Parisian alleyway. The striking color brings out the exposed brick walls opposite. “We wanted bright colors so that when you are looking from outside in, especially in the winter, it looks vibrant and full of life,” says Lynette.

As for the restaurant’s name, the significance of the lily is manifold: “Lilies are part of the bulb family, along with onions and garlic and leeks. We liked the duality of the lily as a bulb—not only does it mean spring and life, but you can’t do French cooking without it,” Lynette animatedly explains. Even before the bistro was born, the name was on Bob and Lynette’s minds. The chalkboard that is located over the bar came from the house they now own. When it was first discovered, the previous owner’s daughter had written her name—Lily—all over it.

As carefully as they designed the interior, Lynette and Bob have crafted a menu that is accessible to a range of tastes, from customers who prefer more conventional sea fare to those endowed with adventurous palates. The challenge at first was overcoming false impressions of French cuisine. “There is a misconception that French food is pretentious and rich,” says Bob. “People tend to say ‘it looks like it’s going to be expensive,’ and traditional Mainers want good portion sizes for their money. We want them to see that we essentially have a French diner here, with food that is hardy, not frilly.” To emphasize the casual atmosphere, the couple refrained from using table linen.
As for the mini maitre d’, his tastes extend beyond his years. “Shawn loves cassoulet and pâté. We believe that children get their food phobias from their parents, and Lynette and I obviously don’t have many of those,” says Bob with a grin.