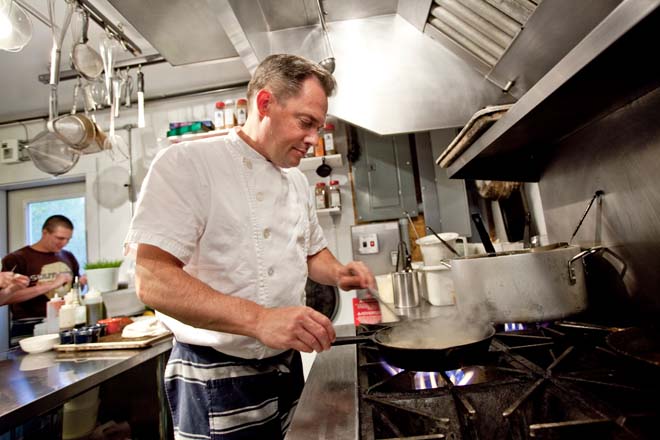 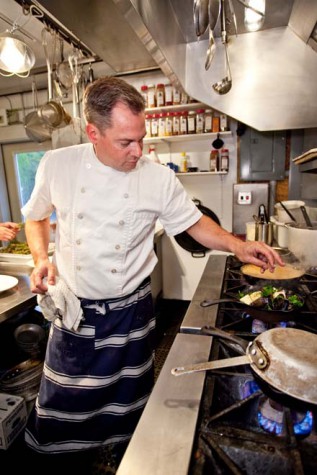 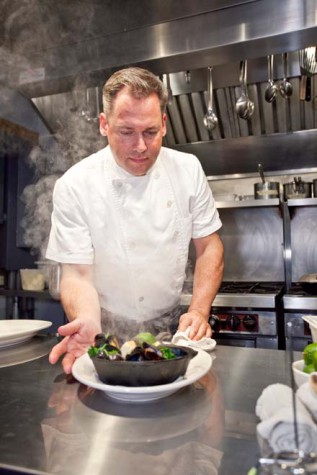 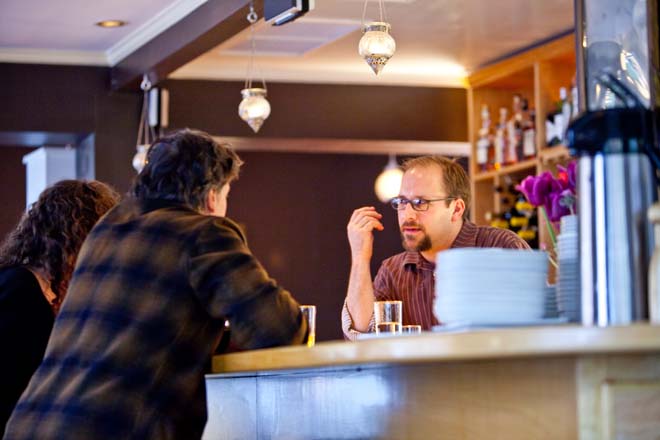 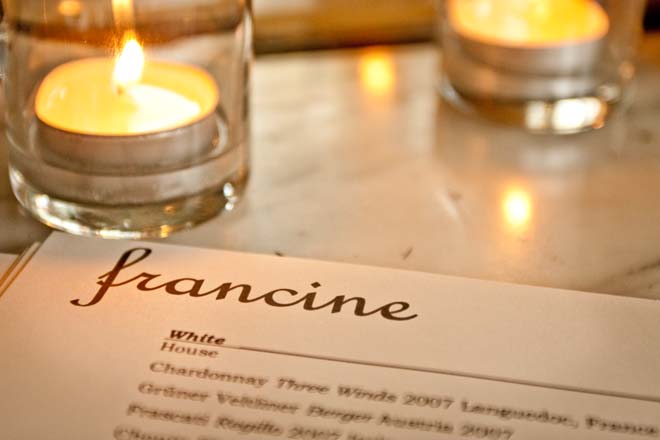 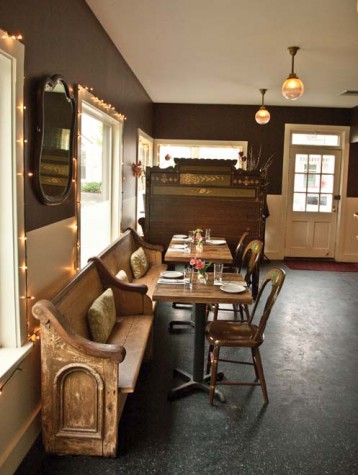 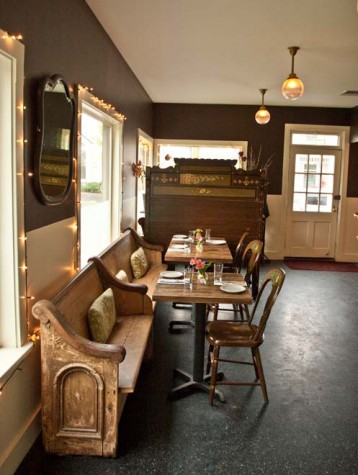 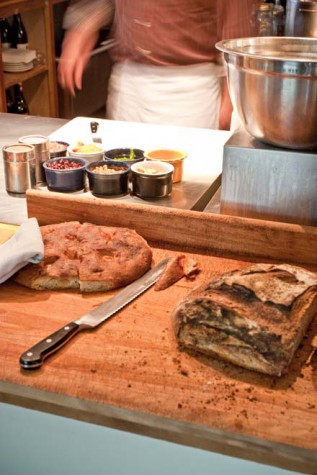 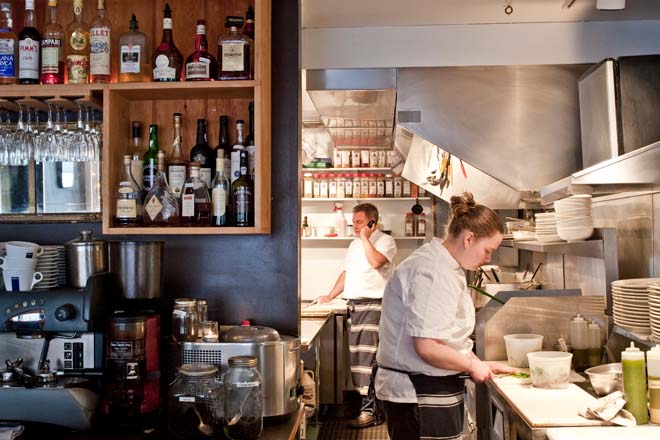 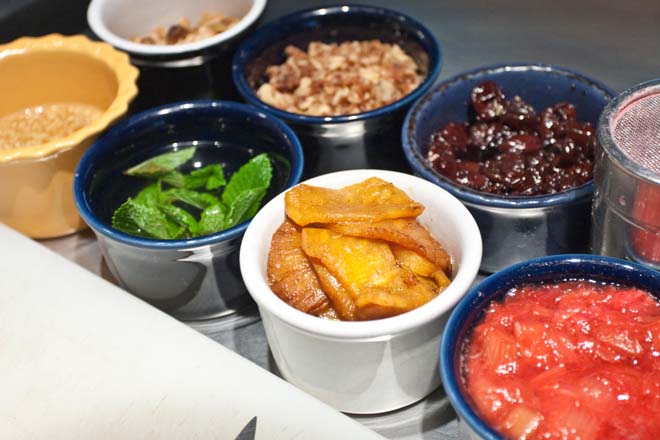 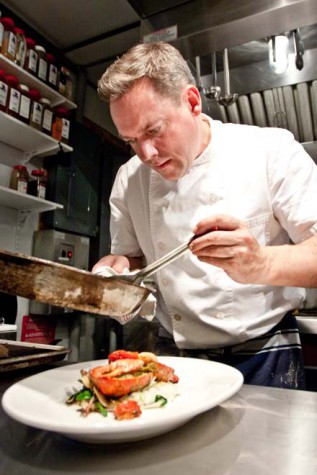 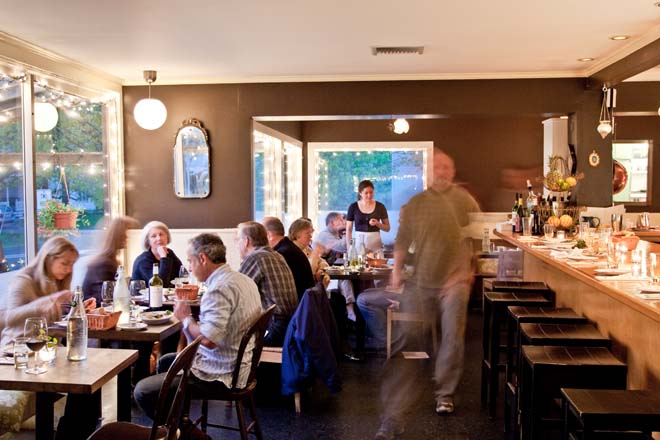 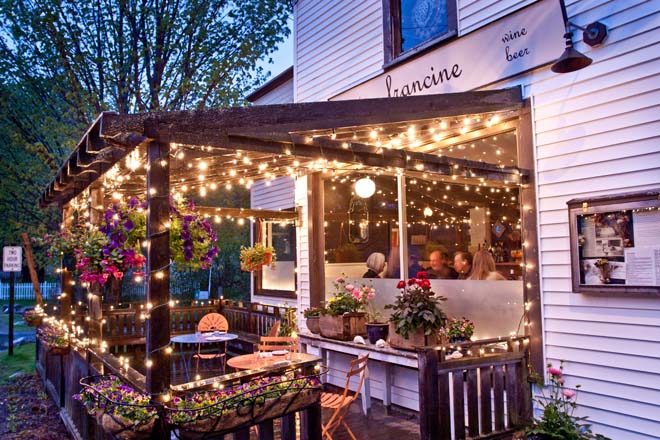 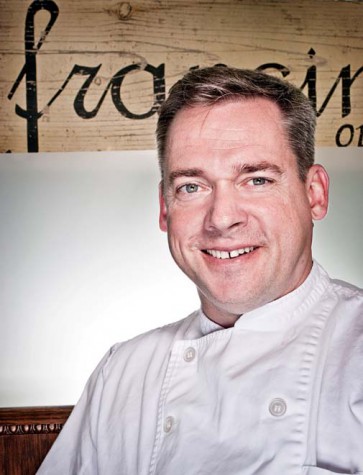 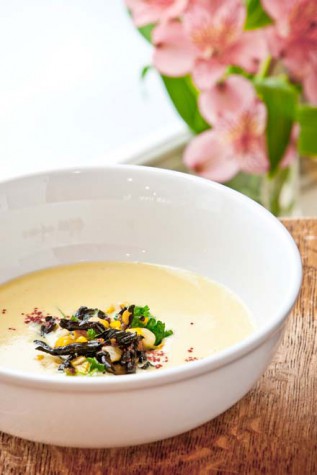 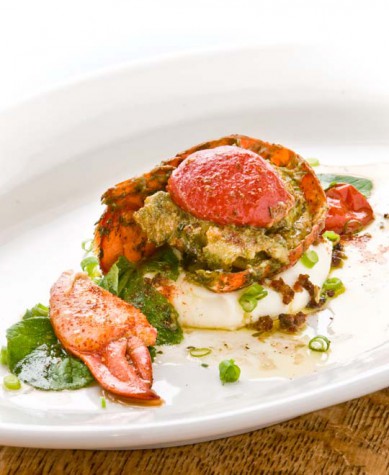 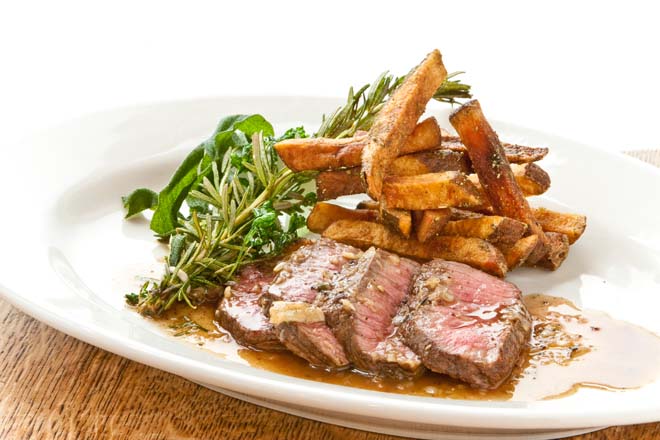 At Francine Bistro, there is an undeniable rhythm in the air—an upbeat tempo that crescendos on summer nights when the candles are lit and the twinkle lights on the patio arbor cast their seductive glow. The chatter of diners and the clatter of plates enliven an otherwise quiet tree-lined street just a few blocks from the bustle of Main Street. And then there is the buzz of the kitchen run by chef-owner Brian Hill, a man uniquely familiar with the pulse of nightly performance. Prior to his life as a chef, the Maine native was a guitarist in the Boston-based alternative-rock band Heretix in the early 1990s. Having lived the life of an aspiring rock star, Hill has perfected the rhythm of nightly routine—his trick is to make it anything but routine.

Raised on a farm in nearby Warren, Hill has always had an appreciation for ingredients that grow in the ground. At an early age, he learned how to make bread and cheese, and was taught how to grow vegetables. “I grew up in a family of six, so we always had a lot of things to cook,” he says. After graduating from high school, he did “the typical teenager thing and headed off to the big city,” where his band eventually got a recording deal with Island Records. “All of a sudden, we were label mates with U2. It was the greatest thing ever,” he recalls with a laugh.

Interestingly enough, it was on tour with his band that Hill got his first real taste of the restaurant business. “Since we were on the road so much, we had the chance to eat at a lot of great restaurants across the country. I learned a lot and made a lot of friends in the industry.” Soon, Hill found himself traveling in the same circles as culinary greats Hans Röckenwagner and Todd English.

After ten years of playing music and touring, Hill decided to call it quits. “There’s nothing worse than an aging rock star,” he jokes. He then chose the next best career he could think of: chef. “After meeting all of those people and wanting to have other ways to be creative, working at restaurants just seemed like the next natural step,” he explains.

A natural step it was. These days, Hill finds many parallels between his former rock-and-roll lifestyle and the restaurant life. “There is a lot of repetition and creativity in both, which is a great combination. I believe that’s why so many musicians are great cooks,” he says. “When you’re on tour, or practicing or recording, you play the same songs over and over, but you always have to make what you do uniquely great every time,” he explains. According to Hill, that’s where the creativity and skill come in. “As a chef, you prepare the same dishes repeatedly, but you have to make them perfect each time. It’s hard for some people to go to a job and do the same thing over and over again, but when you have that attention to detail already drilled into your way of doing things, that’s what makes it work,” he says.

Hill had a lot of practice learning how to make it work. His career flourished in the kitchens of Olives, Figs, Bayona, and the Mauna Lani Hotel, where he worked alongside culinary maestros such as Todd English, Susan Spicer, and Emeril Lagasse. Whether he was working in Boston, Los Angeles, Hawaii, or New Orleans, the flavors and culture of each place influenced his  artistry as a chef. In New Orleans, for example, he learned the nuances of certain flavors in different environments. “A lot of the seafood there has really different flavors than the seafood here in Maine. There, oysters are much better for cooking than for eating raw. This gave me a whole education on combining spices with food. I think about those flavors a lot when we cook with spicy foods today,” he says. Hill also found much inspiration from Todd English, whom he worked for at Olives and Figs, particularly the way he perceives and understands the experience of food. “I learned that you have to make things taste unbelievably good. Food shouldn’t just be average tasting—it should be really luxurious,” he says.

After working all over the country and realizing he missed New England life, Hill did what many Maine natives do after time away: he returned. He sought to open a restaurant on the midcoast that would take advantage of the region’s high-quality meats and produce. “I love that we have all the ingredients here and we also have an educated clientele who are so worldly and well traveled,” says Hill, who opened Francine in 2003 on the site of a former coffee shop. The bistro soon developed a following.

From the beginning, Hill’s obsession with the freshest local products has provided continuous inspiration in the Francine kitchen. Each morning in season, Hill and his staff forage the nearby farmers’ markets for the best fish and meats. Throughout the day, local specialty farmers show up with their just-picked offerings in tow; on this particular afternoon, a potato farmer has just arrived from Aroostook County. To say Hill’s menu is seasonal would be an understatement—it changes daily based on his finds. “A lot of chefs dream about having their own garden. I don’t because I know how much work that is and how much that can distract you from running a restaurant. But I love the fact that there are all these gardens nearby and people bring us all these great things,” he says. For his ever-changing menu, Hill relies on local sources such as Mainely Poultry, Caldwell Farms, Hahn’s End, Appleton Creamery, Jess’s Market, and Peacemeal Farm.

Francine’s creatively succinct menu consists of just four appetizers and four entrees. While diners have embraced Francine’s short list of options, its simplicity was born out of necessity: when Hill first opened, the bistro was equipped with only two hot plates. “Everyone remarked on how calming a short menu was, so I’ve kept it that way,” he says with a smile. “There are a lot of things that I would like to be cooking, but it’s fun to have the discipline to make those four dishes great,” he adds. On this particular night, one of the entrees is octopus with caramelized garlic and lovage, an aromatic perennial herb that tastes “like forty-foot-tall celery,” according to Hill. On another night, entrees might include rabbit ravioli, wood roast duck, Port Clyde halibut, or herbed roast lobster.

For Hill, Francine is exactly what he envisioned when he moved back to Maine. “The word ‘bistro’ is so overused, but this is what a bistro means to me—a place people go to eat any night of the week, often several nights of the week, where they talk to one another and just relax,” he says. During an extensive renovation last summer, the kitchen was expanded and nearly twenty seats were added to accommodate even more guests anxious to sample the finds of the day and catch up with one another.

On a busy night at Francine, Hill churns out dish after dish with the same flair he used to perform song after song while in the band. Although he admits to occasionally missing his days as a musician, the chef now channels his creativity into the nightly performance of the bistro. Like any great show, from night to night it is never quite the same.