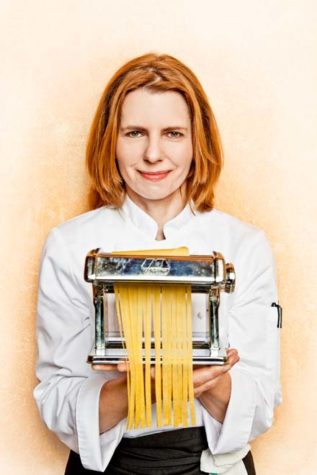 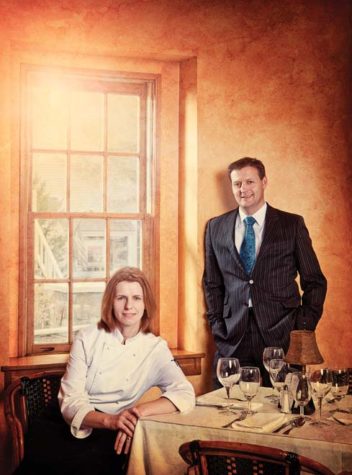 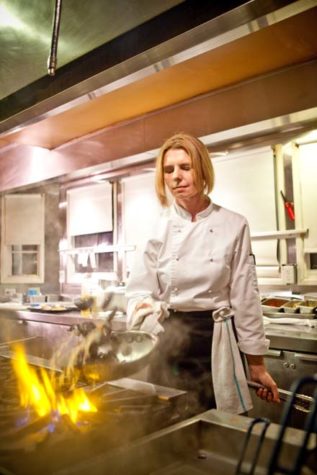 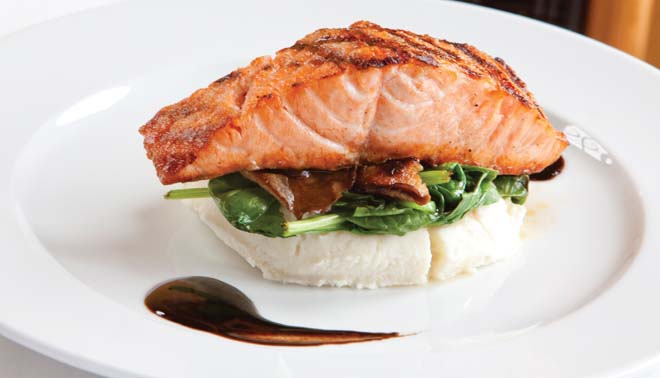 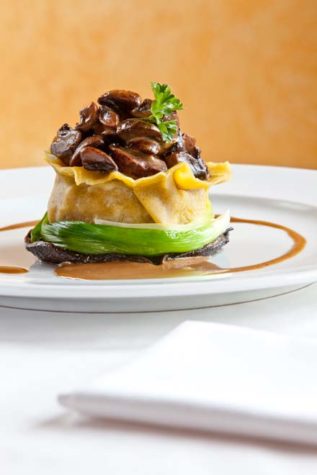 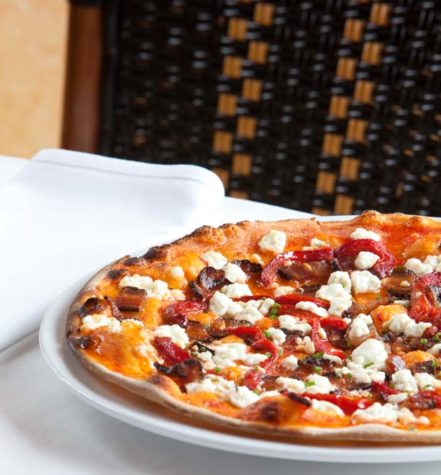 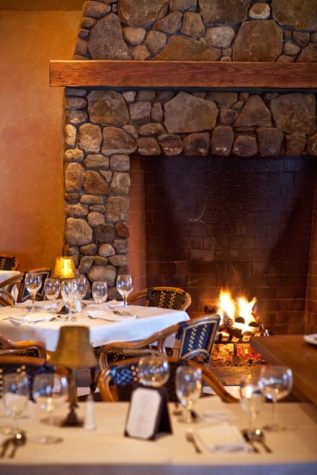 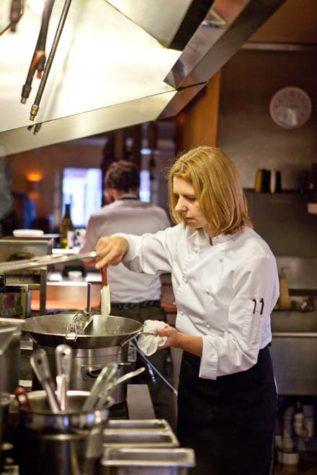 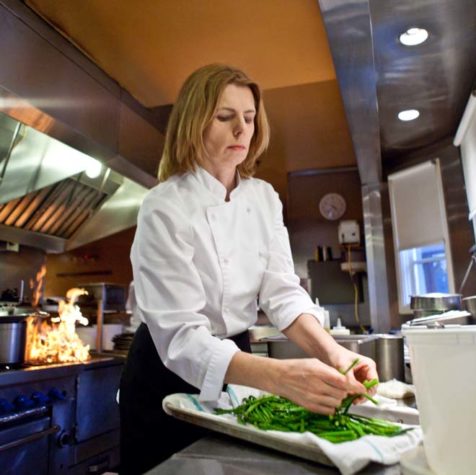 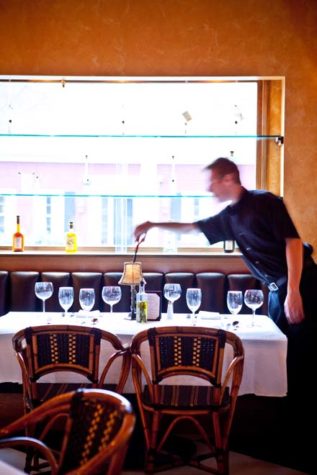 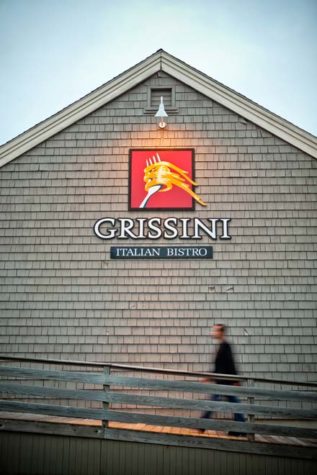 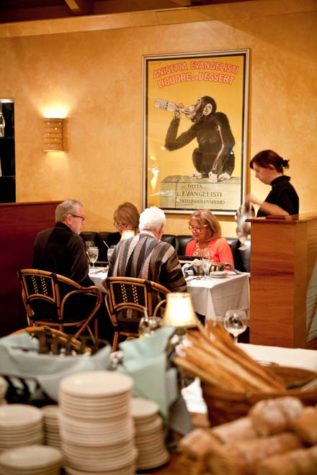 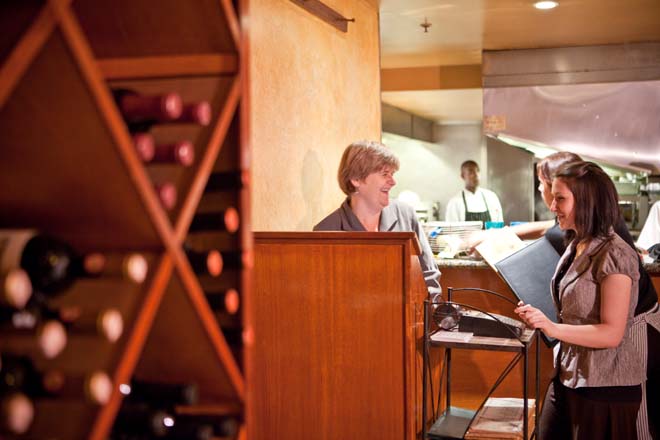 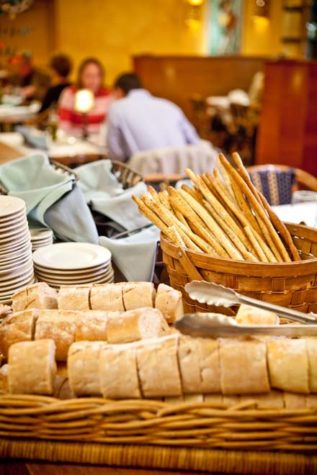 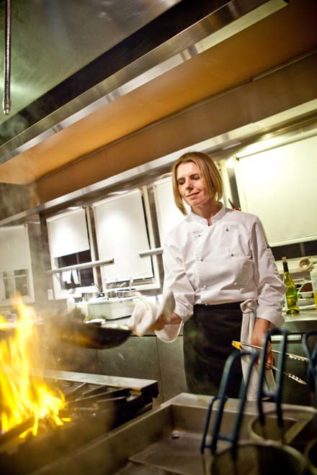 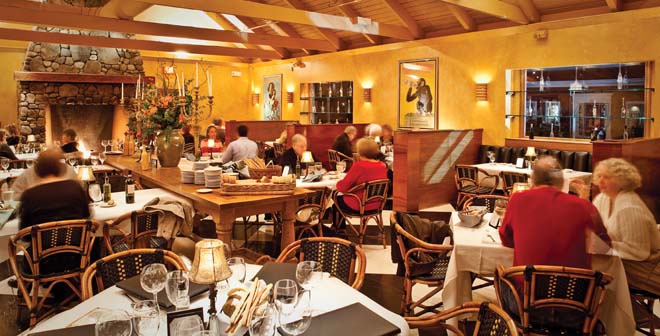 From the street, Grissini is relatively nondescript: a gray-shingled box with two white-trimmed windows facing Route 9 in Kennebunk’s Lower Village. Unlike the restaurants in the Kennebunkport area that entice with water views or storefronts overlooking the bustling sidewalks of Dock Square, Grissini relies on reputation and that time-honored advertising vehicle: the word-of-mouth recommendation. It has the reserved confidence that only a highly successful, well-established eatery open every night of the week, both in season and out, can enjoy. And once inside, one finds the atmosphere is anything but unremarkable.

The restaurant’s warm yellow walls are reminiscent of a sun-drenched Tuscan field, and the high-ceilinged dining room is warmed on chilly winter nights by a massive stone fireplace. On one end of the dining room, sliding glass doors open onto a terrace for al fresco summer dining. Just beyond, the bakery produces a variety of aromatic breads and, of course, grissini—pencil-thin sticks of crispy bread that originated in the Piedmont region of Italy—for the restaurant and its sister properties. The reason for the dining room’s open, airy construction lies beneath its floorboards, where the remains of a swimming pool hint at the building’s former life as a private residence.

According to manager Lee Fopeano, who has run Grissini since it opened in May 1996, “things haven’t changed much over the years.” That is, in large part, because the vision of late owner Laurence “Laurie” Bongiorno has been faithfully and steadfastly carried out, since his death in 2007, by Jonathan Cartwright, the chief operating officer and executive chef of US Hotels, a privately owned hospitality company that runs several inns and restaurants in Maine and Vermont. Cartwright, an Englishman, was a close friend of Bongiorno and once dreamed of someday winning the Tour de France. At the encouragement of his father (who also refused to pay for any more cycling equipment), Cartwright took up cooking and eventually worked as a chef for several Relais & Châteaux properties in Massachusetts, Germany, and Puerto Rico before becoming sous chef at the White Barn Inn—also owned by US Hotels—in 1996. In addition to Grissini and the White Barn Inn, the company also owns the Beach House Inn, the Yachtsman Lodge and Marina, and the Breakwater Inn & Spa in the Kennebunkport and Lower Village area.

Grissini is as much the embodiment of Bongiorno’s vision as it is the result of all the hard work invested by the trio who make the restaurant what it is today: Fopeano, Cartwright, and chef Leonora Palaima, a Lithuanian native whose mother was the host of a radio cooking show when Palaima was a little girl. Palaima, who has been with Grissini for four years, was hired when she was Bongiorno’s neighbor. “I’ll never forget the time Laurie came up to me and said, ‘My neighbor wants to be a chef. Only give her the job if she can do it,'” recalls Cartwright. Palaima proved to be an impressive student and eventually became a culinary master. “Leonora is very passionate, very driven, and a very tough lady. She is always yelling at me not to swear,” Cartwright laughs. “There is no foul language in my kitchen,” asserts Palaima.

The professionalism of the Grissini kitchen comes through in Palaima’s creations, which are Tuscan influenced. The seasonal menu is rooted in pastas and pizza from a wood-burning oven, which are served up alongside an array of meat and seafood entrees. For Palaima, the inspiration comes straight from northwestern Italy. “Tuscan cuisine is very simple. If you look at the landscape in the countryside of Tuscany, you see everything that is going to be on your plate. You see grapevines. You see sheep in the fields. You see chickens. You see rabbits in the forest. That’s what they eat.” All of Grissini’s dishes are marked by pure flavors—from the wood of the oven and grill to the salt, olive oil, and herbs.
What isn’t on the Grissini menu is just as telling as what is. According to Fopeano, from the beginning Bongiorno steered clear of conventional Maine fare. “I remember the first year we opened, people walking in and saying, ‘How can you have a restaurant in Maine without New England clam chowder?'” recalls Fopeano. “What I always admired about Laurie was that he had a very clear vision of what he wanted Grissini to be. And New England clam chowder was never going to be on this menu.” Despite the absence of chowder, Grissini offers several seafood dishes—but with a Tuscan twist, of course—including lobster ravioli and wood-grilled salmon, two of the restaurant’s most popular dishes.
At Grissini, the customers linger over meals, making the atmosphere just as important as the food. That’s why everything in the restaurant was designed to be grand, from the generous portions to the dining room’s massive fireplace. Although intimacy is not something people typically come to Grissini for (there are no tables just for two here), there is a natural coziness to the open space, particularly when the fire is crackling. As Fopeano says, “You’re almost a participant when you have dinner here. You can see everything—the open kitchen, the other diners. Open-concept kitchens may be all the rage now, but back 15 years ago this was a new thing.”

As Grissini prepares to celebrate a decade and a half in Kennebunk, the people who remember Laurie Bongiorno know he would be proud of the restaurant’s continued year-round success. As Cartwright recalls his first phone conversation with Bongiorno when he was offered the job at the White Barn Inn, it is clear just how much Bongiorno was loved. “I have these fond memories of Laurie sitting at the piano at the White Barn. He’d set up shop there with his laptop and his phone, working and chatting with everyone. We all miss him so much.”