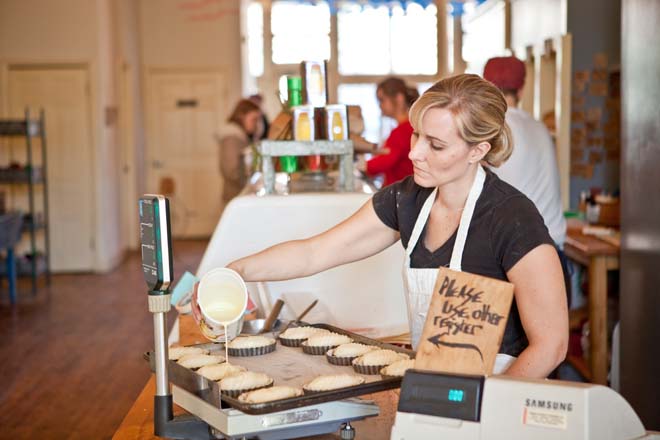 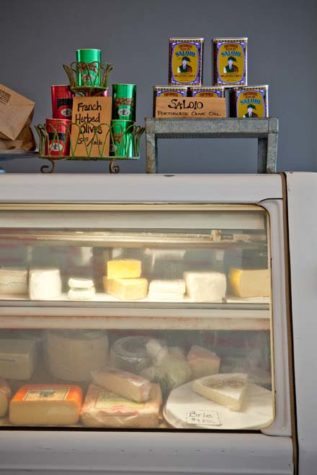 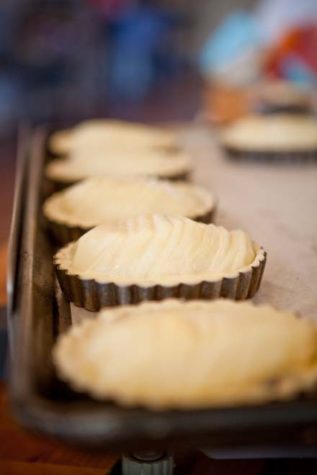 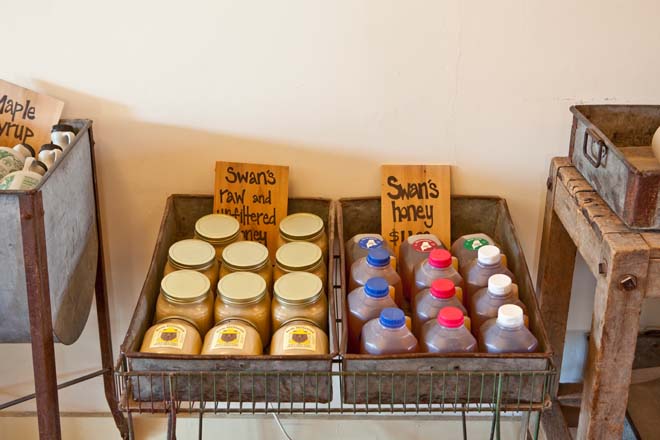 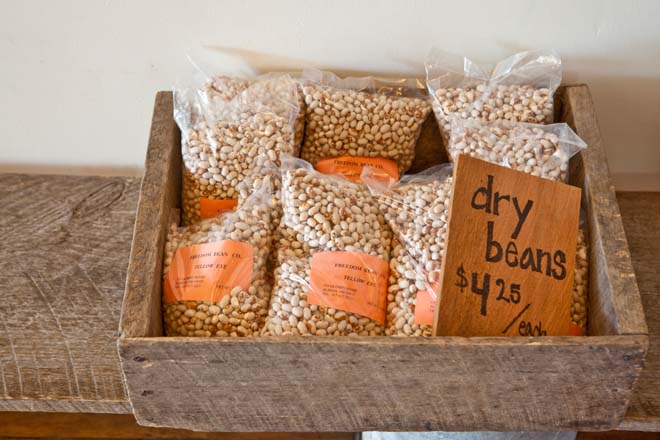 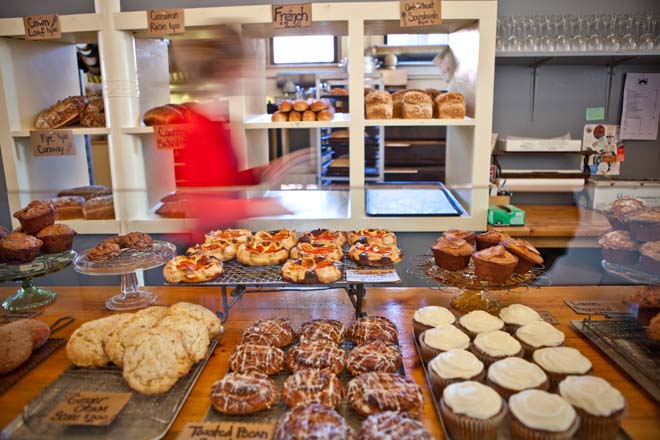 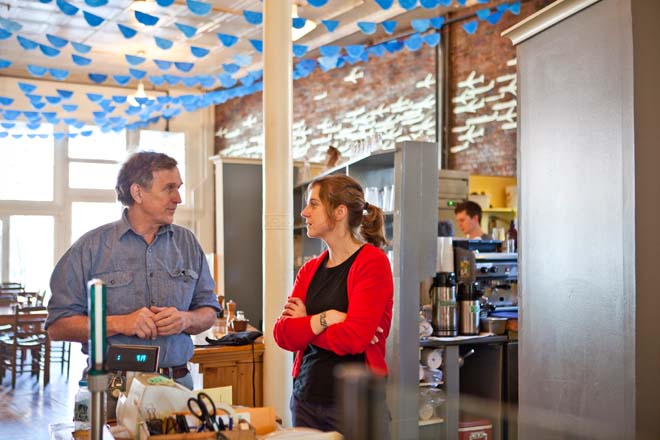 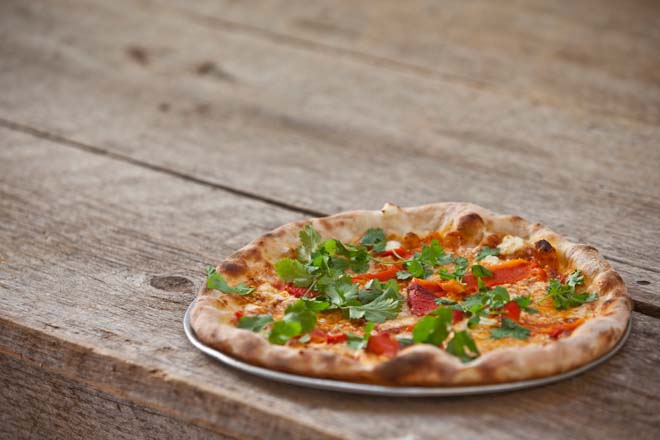 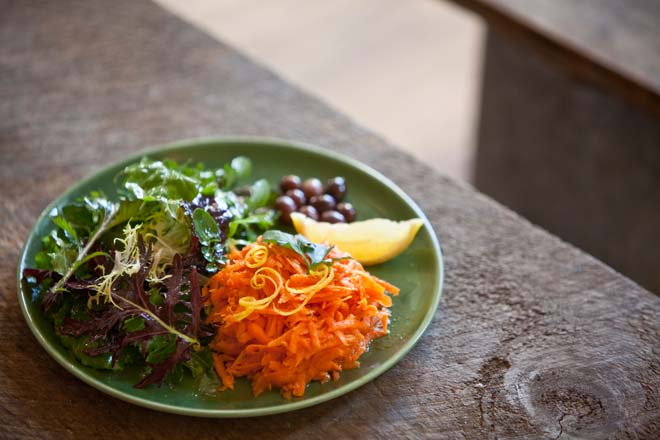 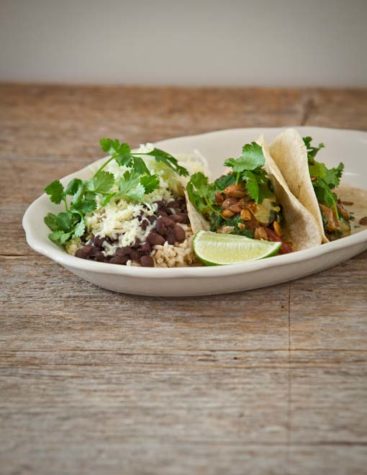 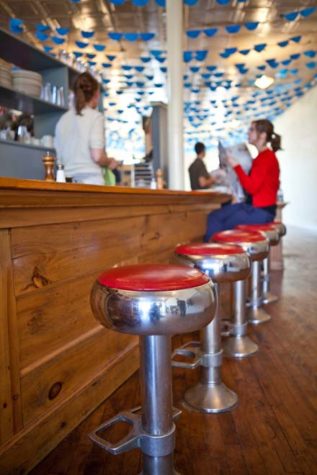 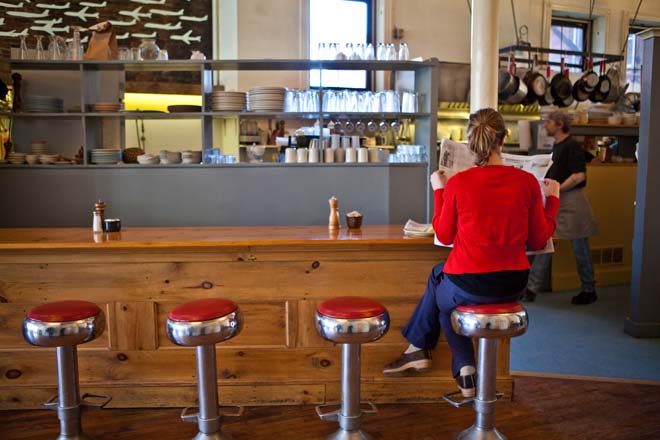 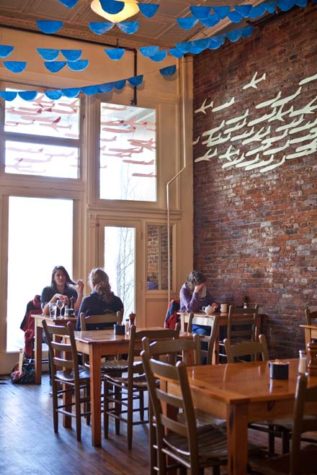 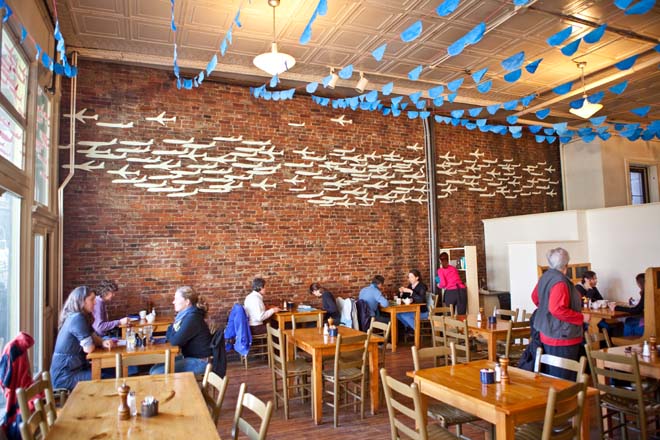 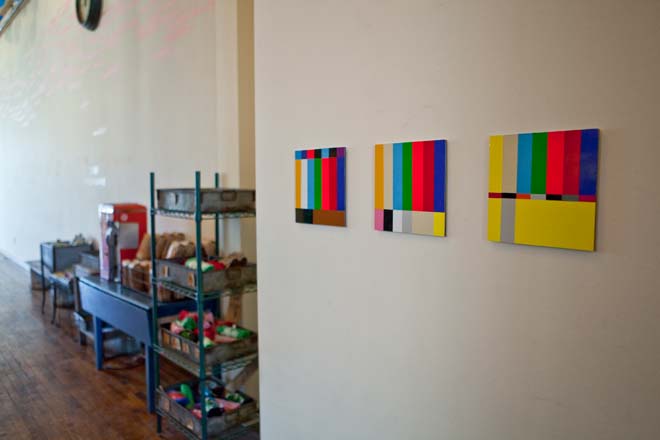 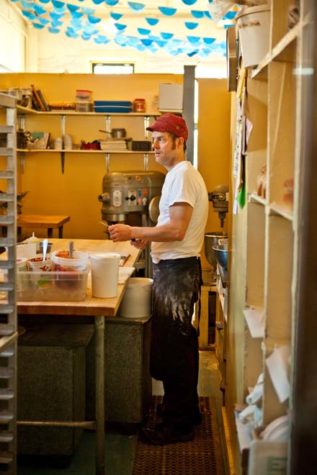 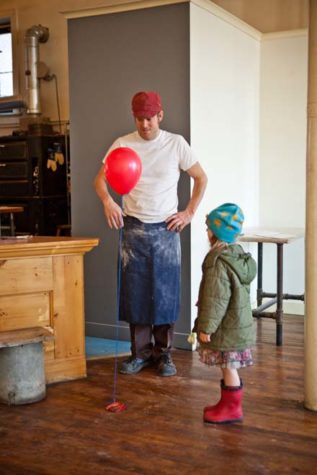 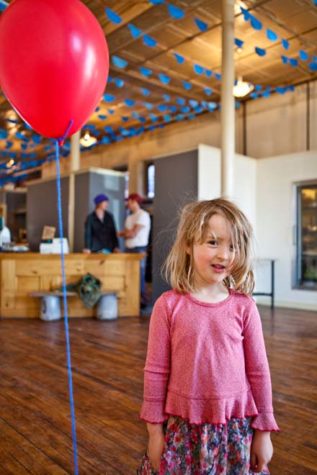 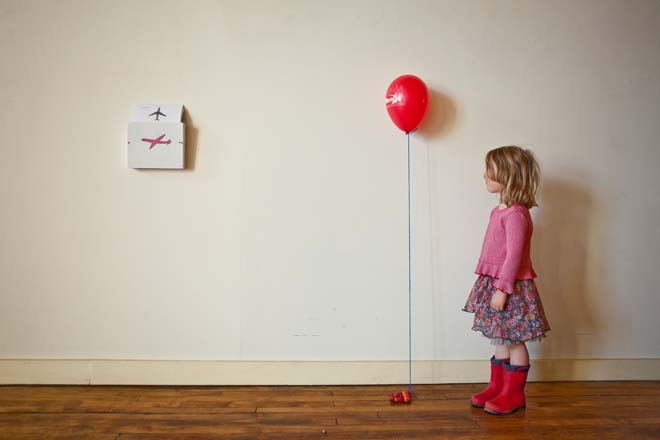 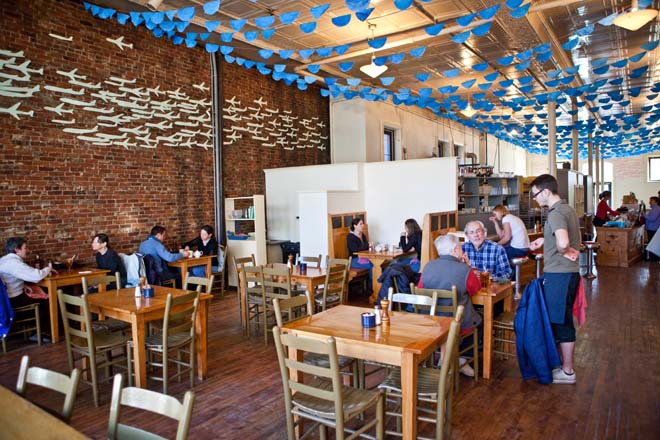 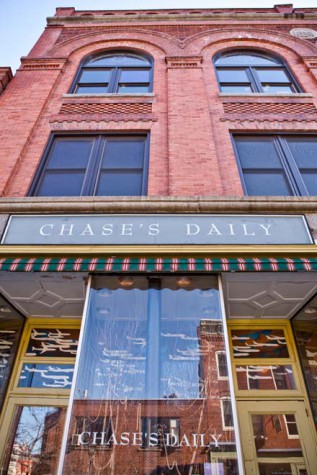 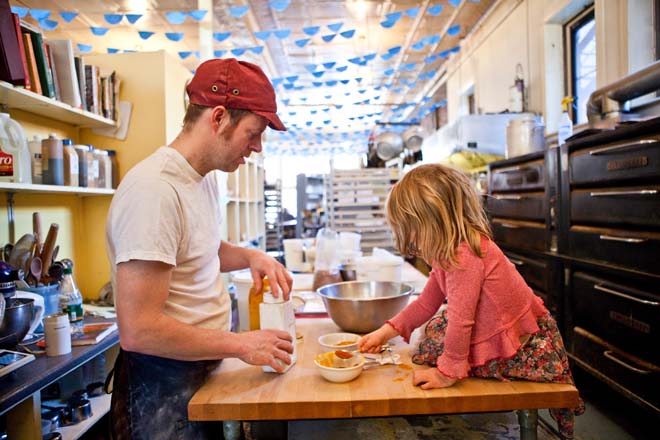 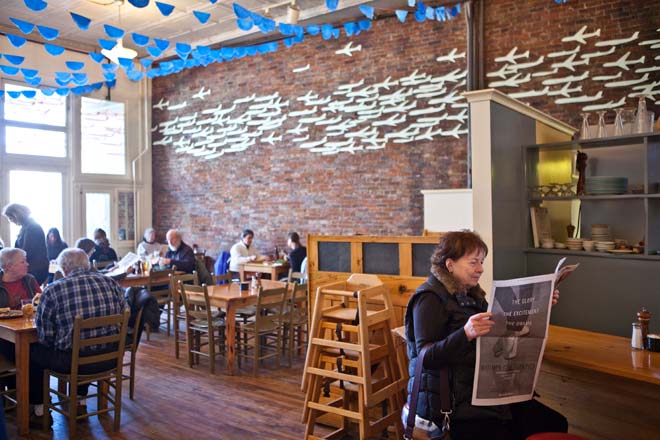 Fresh from the Farm

Chase’s Daily in Belfast is no doubt at its prime in the summertime, when colorful heaps of freshly picked produce from the Chase family farm in Freedom overflow from crates, bins, and baskets in the back of the restaurant. In the waning weeks of winter, the farm stand is emptier, with heartier goods like beans and honey on sale in place of vegetables. The space doubles as an art gallery year-round, and the work of local artists hangs under high tin ceilings.

Even in the dead of winter, Chase’s remains a dining destination. The place somehow manages to be many things and yet entirely its own thing at once: vegetarian restaurant, cafe, bakery, farmers’ market, art gallery, and all-around family affair. In 1998, the Chase family bought the historic Main Street storefront, a former Odd Fellows Hall from the late 1800s. Over the last decade, each family member has assumed a critical role in keeping the business running: Co-owner and matriarch Penny Chase manages the kitchen with Freddy LaFage, her daughter Megan’s partner. LaFage and Megan also run the art gallery, while older sister Phoebe bakes the array of pies, pastries, and breads that cover the counter next to an abundance of artisanal cheeses. In season, Penny’s husband Addison does the growing with the help of the other family members. The group effort does not go unnoticed; the James Beard Foundation recently named Penny, Phoebe, Megan, and LaFage semifinalists for the Best Chef of the Northeast award—the four of their names taking up an extra long line in the list of nominees.

Chase’s offers a diverse, worldly menu that changes daily depending on what’s fresh. In the few months when the Chases can’t supply the restaurant from their own land, they bring in produce from other parts of the country. On a recent mid-winter day, the lunch menu featured chipotle pizza with grilled red peppers, cheddar, feta, and cilantro, and chard potato tacos with crema habanero salsa served with rice, beans, and cabbage. Dinner, served only on Fridays, might be cacio y pepe, a traditional Roman pasta dish with sheep’s milk cheese and black pepper. Or it could be stuffed cabbage leaves with chard, ricotta, parmigiano-reggiano cheese, and marjoram in a tomato sauce.

There is an art to everything the Chases do, so it comes as no surprise that food and art have become so explicitly intertwined in the space. Megan and LaFage, both artists themselves, started the gallery in the back of the restaurant in 2002. A few years later, fellow coworker and artist Karen MacDonald joined them. Called Perimeter Gallery, the space features local artists with shows that change every few weeks. This year, LaFage decided to go one step further. Over the course of three Sundays, he enlisted the help of nearly twenty collaborators—artists, friends, even his and Megan’s 5-year-old daughter, Romy—to produce Chase’s first large-scale installation.

Called Flyby, the project is an attempt, LaFage says, “to reveal a slice of the scale of our infrastructure and to comprehend it in a physical way.” The inspiration came from a simple idea: if you lie down in the grass on a summer day and look up into the sky, you will see a steady march of planes heading west in the morning and east in the evening. LaFage did some research and found out that roughly 800 transatlantic flights make their way across the skies above Maine every day. “The scale of humanity and its impact is an elusive thing. We live within its infrastructure, yet we only witness events one at a time. We understand data that is presented to us, yet it remains difficult to comprehend the scale at which we operate collectively,” he says.

To express this concept visually, the installation includes roughly a thousand flags on banners running the entire length of the restaurant and 830 pink and white paper-airplane silhouettes cut from reclaimed paper scrapped by Moss Inc. Collectively, they represent a single day of air traffic. Part of the beauty of the installation is that it was created using simple, spare materials that the team had on hand—the entire budget for the project came in under $50. “I’d been eyeing a carton of coffee filters we’ve had lying around, wondering what I was going to do with them. It’s such an interesting material and was ripe for a project,” he says. The filters were dyed blue and used to create the flags that run the length of the banners. “I wanted it to be beautiful, subtle, and provoking,” says LaFage.
Provoking in its simplicity. Just like the food.