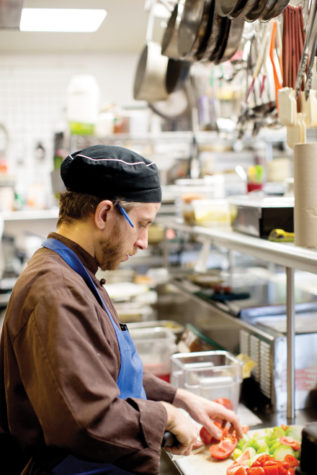 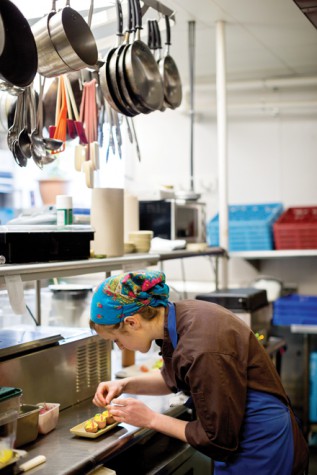 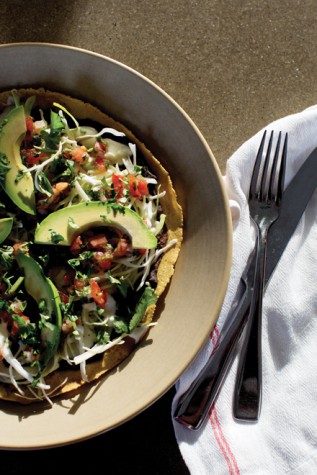 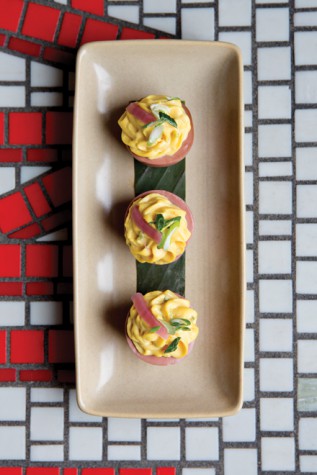 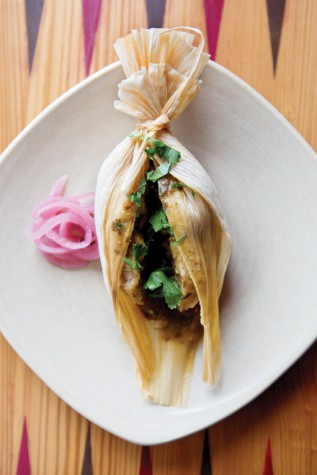 The tamale is a perfect package of masa, seasonal steamed vegetables, and a smoky tomato and chipotle sauce. 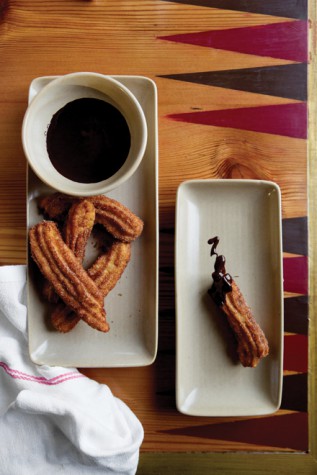 Homemade churros, light and airy doughnuts dusted in cinnamon sugar, are made for dipping in warm chocolate sauce. 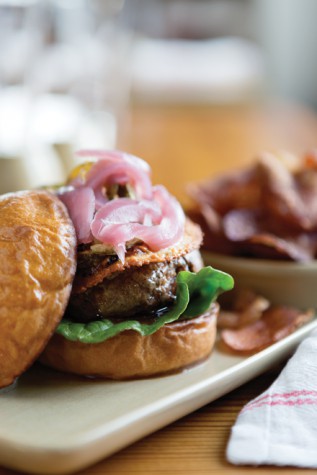 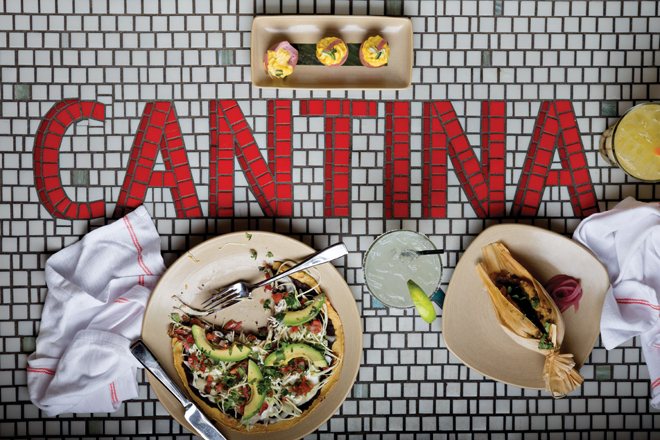 Everything in the Cantinafrom the art to the iron workis produced by local artists or inspired by the area. Portland artist Joe Kievett created the mosaic and all the tile work. Work by John Bisbee, Tessa OBrien, and Nate Deyasso can also be found throughout the restaurant. 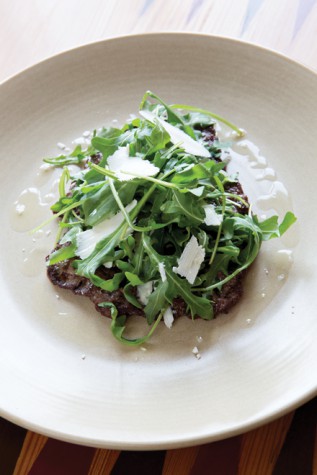 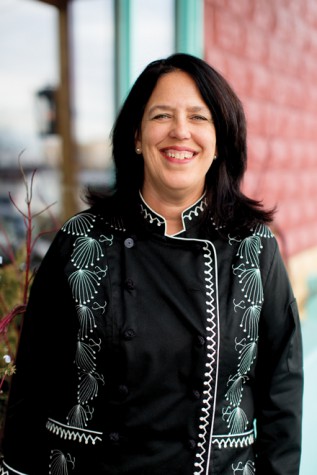 I got the bug for cooking early, Lewis says. After years of working in kitchens, opening restaurants, and consulting, its cooking food that makes her happy. 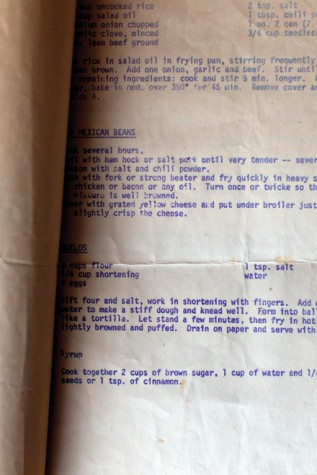 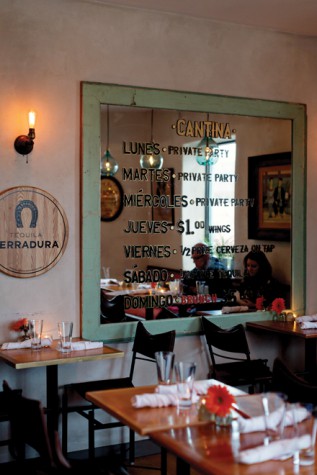 Repurposed items have a place at El Rayo Cantina. A mirror salvaged from a local home is reinvented as a daily specials board. 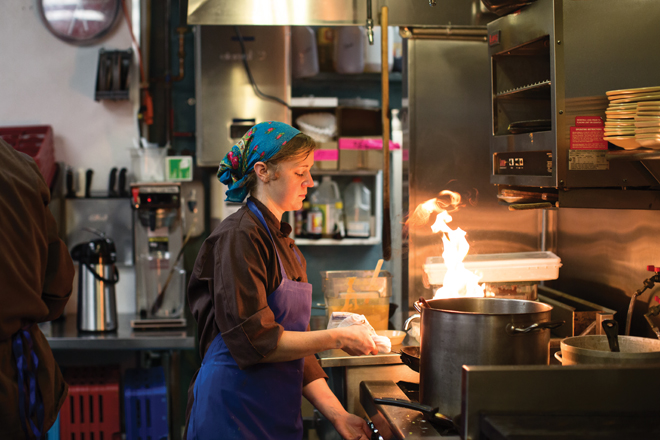 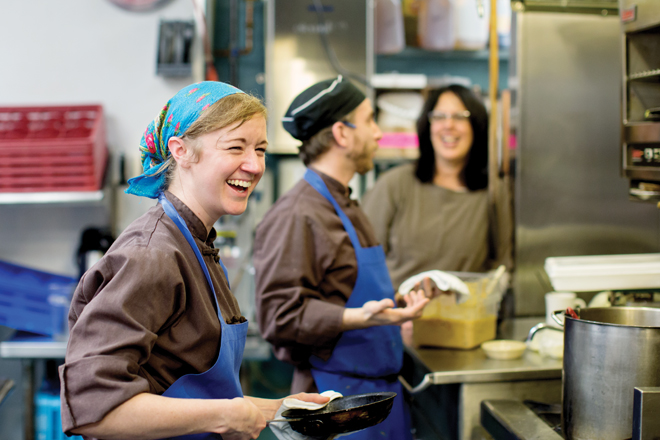 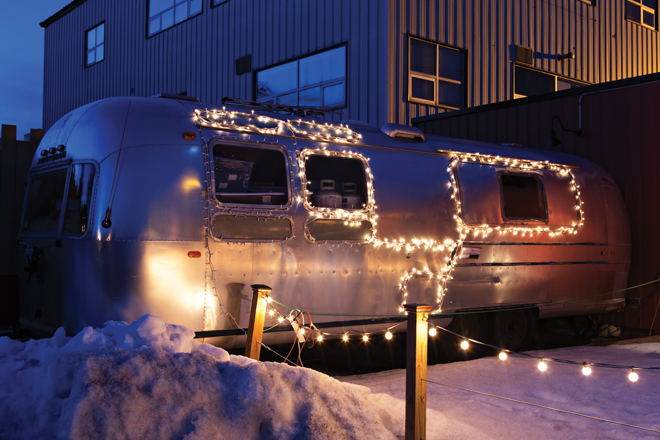 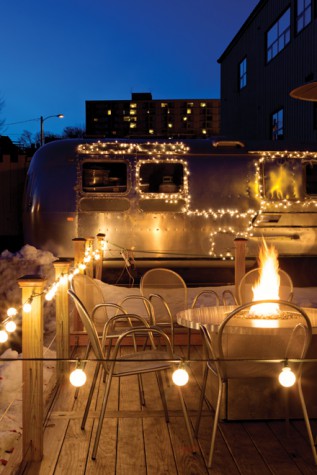 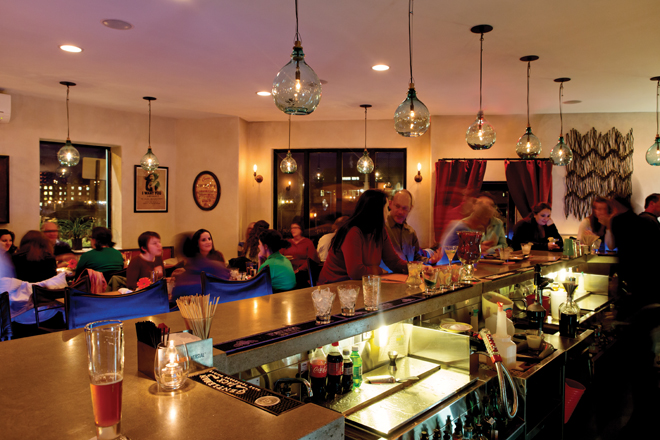 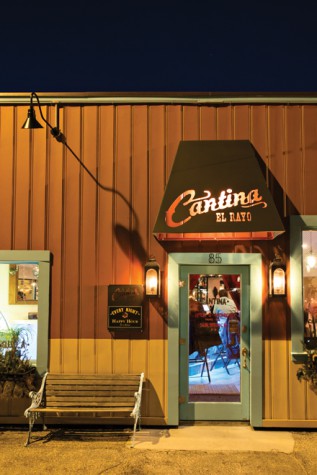 When she was in fifth grade, Cheryl Lewis threw her classmates a “fiesta” and gave them all homemade Mexican cookbooks. She drew flowers on the cover of each book and wrote the word “Recipes” in big bubble letters. Now, the pages are thin and slightly yellowed. In purple mimeographed type are recipes for tortillas, tacos, guacamole, refried beans, and deep-fried, crispy buñuelos.

When Lewis talks about cooking for her classmates or how her mother used to invite friends over for “ladies’ luncheons” complete with white gloves and finger sandwiches, she lights up. She laughs loudly and often, and I can tell the cookbook in fifth grade wasn’t a fluke—she genuinely enjoys entertaining and cooking for others.

Lewis’s love of Mexican food continued to grow when she was a struggling art student in the Mission District in San Francisco. When she moved back to the East Coast and started her culinary career, she missed the Mexican food she’d grown to love. Over the next 30 years she and her life partner Norine Kotts opened restaurants and gourmet food shops in Boston and Portland, but always dreamed of having their own Mexican place. It wasn’t until they worked together with local businessmen Alex Fisher and Tod Dana to establish Portland Lobster Company that their dream began to take shape.

A few years later when Fisher and Dana were ready to open another restaurant, they turned again to Kotts and Lewis. The women agreed, as long as it was a Mexican restaurant. The result is El Rayo Taqueria, now an established Portland hotspot known for casual family dining. In 2012 the team opened the Cantina, a lively restaurant and bar located next door. It’s become the place to enjoy happy hour specials, authentic Mexican food, and now brunch.
I’ve met friends for drinks at the Cantina, but have never explored the menu, so on a recent visit, I placed my meal in Lewis’s hands. The Cantina is an intimate space, and the dim lighting and funky jazz gives it a sultry, lounge-like feel. I sit at the bar and watch as couples share small plates of food, friends enjoy happy-hour drink specials, and a group of women celebrate a birthday in the round booth by the door. Like most of the decor, the booth has a story: it was salvaged from the basement of the Eastland Park Hotel and dates back to the 1920s. I’m struck by the restaurant’s transformation—once an upholstery shop, it’s now decorated with art, tile, and ironwork created and repurposed by local artists.

The atmosphere mirrors the menu: it’s approachable and fun, but refined. I start with a bowl of pimientos de padrón, blistered green peppers that are cooked in Oaxacan sea salt. Eating these peppers can be a dangerous game—one in a few can be unbelievably hot. The taco changes regularly and tonight it’s filled with first-of-the-season Maine shrimp, cilantro, and a crunchy carrot and cabbage slaw. With just a dash of El Rayo’s homemade arbol chile sauce, each bite is warm and cool from the chiles and citrus. The tamale, a dish Lewis calls “a little present,” is packed with flavor. When I open the corn husk, steam rises to reveal a little square of masa topped with earthy mushrooms, creamy goat cheese, and hearty Swiss chard. The smoky tomato and chipotle sauce starts off mild, but the heat intensifies with each bite. Even after I finish the tamale the spices linger—it’s invigorating and makes me want a cocktail.

Kotts has spent time in the kitchen, but at the Cantina she’s the general manager and experiments with the drink menu. Her knowledge of flavor profiles has led her to infuse local apples in bourbon and spike tequila with black peppercorns and habanero and ancho chiles. Her cocktails and nonalcoholic creations reflect what can be found at the farmers’ market. For brunch, she’s made traditional Bloody Marys and Bellinis but also nonalcoholic refrescos and smoothies for a healthy breakfast alternative.

I order the house margarita made with a slightly oaked, barrel-aged Familia Camarena reposado tequila. The reposado has a toasty vanilla flavor and when mixed with lime juice, triple sec, and simple syrup the cocktail is both refreshing and warming. I also order the sweet and tart Passionista served on the rocks with a salted rim. With silver tequila and passion fruit juice, it’s a fruity version of a margarita and a perfect balance to the heat of the tamale.
Lewis’s mother used to experiment with recipes from the New York Times, so as a child, Lewis was exposed to different flavors and exotic dishes. This may be where her love of fusion cooking took root. From 1985 to 1995 Kotts and Lewis ran Cafe Always, a fine dining fusion restaurant in Portland’s East End. Now, instead of combining pasta with duck confit, cilantro, and fish sauce, Lewis melds Mexican, Spanish, and South American flavors.

“Some things I make are straight out of Mexico, and some things are influenced by Mexico,” she says. “There’s a lot of roasting and grilling and pureeing and grinding. It’s much more complex than people know.” And, because of the focus on corn and fresh vegetables, the menu works well for gluten-free and vegetarian diets.

A dish with four simple ingredients is one of the boldest I’ve tasted. A flap steak—a cut of meat similar to skirt steak—is pounded thin and heavily seasoned with garlic, salt, and pepper. It’s topped with spicy arugula greens, shaved cotija cheese, and a hint of lemon juice. Individually, these are strong flavors, but they play off each other harmoniously. The lemon adds brightness, the greens complement the garlicky meat, and I love that there’s a piece of cheese in every forkful. I order another of Kotts’s libations, this time the Botanist. It’s served in a chilled martini glass, but first a bit of absinthe is swirled in the glass and discarded. Then a drizzle of honey is added and the chilled lemon-infused vodka and St. Germain are poured in. It’s clean and potent, and leaves me with a lingering hint of anise.

For me, the tlayuda—a Mexican version of a flatbread pizza—is the show stopper. Cut into fours, it can be an appetizer or a meal of its own. A spicy black bean paste is spread on a large corn tortilla, then it’s layered with crunchy shredded cabbage, fresh pico de gallo, Oaxacan string cheese, and a creamy avocado sauce. Finally, the tortilla is finished with chorizo, beef, chicken, or mushrooms. Lewis used to order the cheese from Texas, but Smiling Hill Farm’s Silvery Moon Creamery is now making the mozzarella-like cheese for the restaurant.

The first time Lewis tried a tlayuda was on the streets of Oaxaca nearly seven years ago. While the dish never left her mind, it took a few years for her to return to the region to learn more about it. Right before the Cantina opened Lewis enrolled in an intensive cooking school called Seasons of My Heart, run by Susana Trilling. She asked Trilling to add a section on the tlayuda to the curriculum. Lewis may have been inspired by traditional Oaxacan tlayudas, but she’s put her own spin on the dish. She eliminates the traditional layer of pork lard called asiento and she gives vegetarians a shiitake mushroom option.

“I thought it would be something that people would try and say ‘Oh my God! I had no idea,’” she says. “I want it to be this thing that will turn people on to something that’s really accessible, but also unique to us and to Mexico. I’ve traveled all over Mexico, and the only place I’ve ever seen this dish is in Oaxaca.”

The tortilla is thin, but can hold all the ingredients without getting soggy or breaking. With smooth avocado and crisp cabbage, warm melted cheese and cool tomatoes, and, in my case, spicy chorizo, each bite is a new combination of flavors, textures, and temperatures.

To finish the meal, Lewis sends out a small plate of homemade churros. These airy doughnut sticks are served warm and dusted with cinnamon sugar. The dough is as soft as a pillow and even after such a big meal, it’s easy to finish them all—especially when dipped in the creamy dark chocolate sauce.

This summer, the Airstream trailer parked outside will act as a stationary food truck and bar. The inside of the Airstream has been custom-designed with stainless steel kitchen equipment and a comal—a large, rotating, clay tortilla press used to make traditional tlayudas like the ones Lewis ate on the streets of Oaxaca.

It’s fitting that the Airstream is the newest addition to what Lewis, Kotts, Dana, and Fisher call the “El Rayo campus.” Like the Cantina’s transformation from an upholstery shop and El Rayo’s renovation from an abandoned gas station, Dana and Fisher have converted the Airstream from scrap metal into something special. They are looking forward to this summer when they can share it with the community.