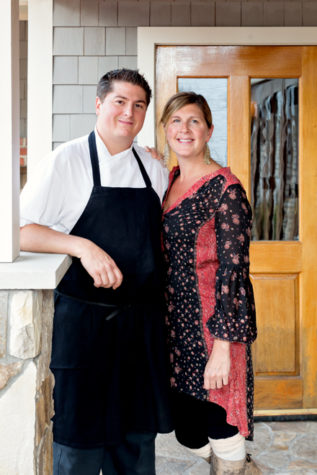 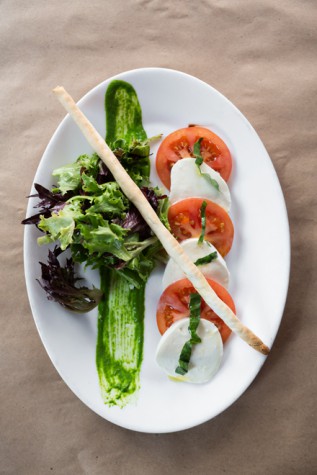 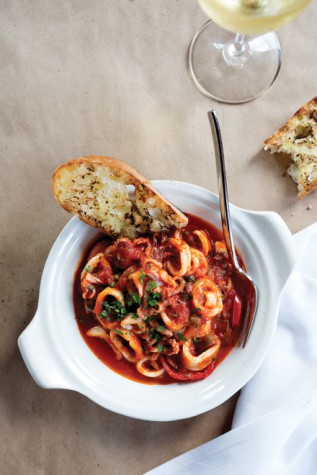 Chef David Ross serves his squid slices in a bold, hearty red sauce, which lets the natural flavor of the calamari shine through. 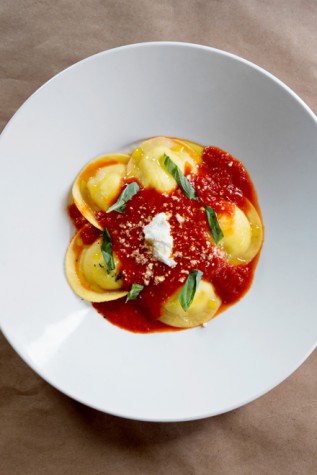 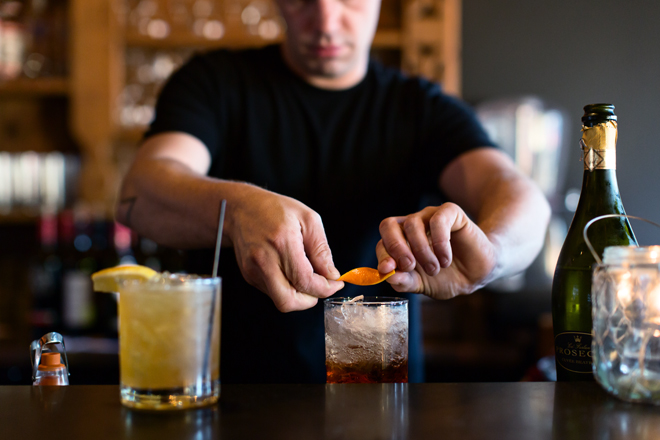 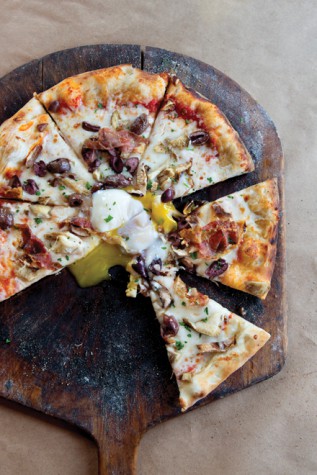 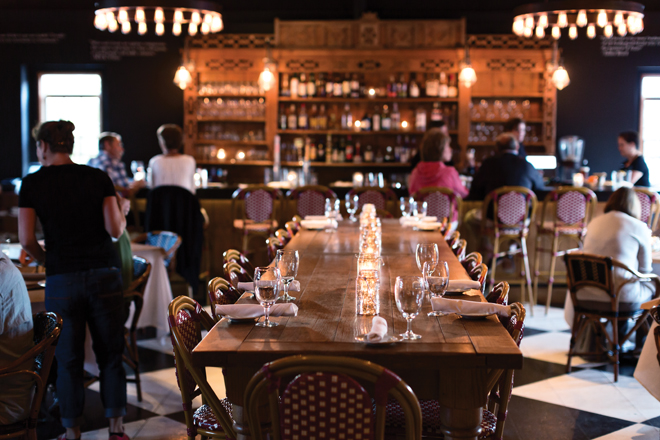 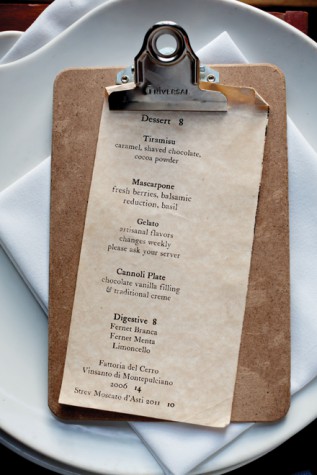 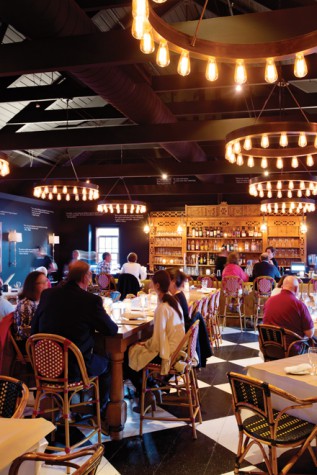 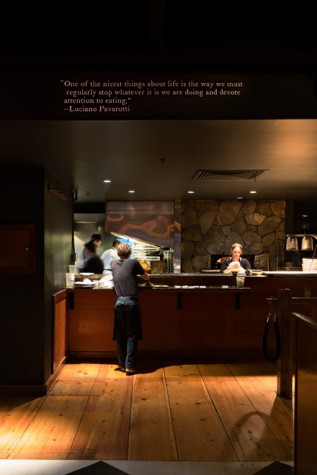 The dessert menu showcases Italian classics, including a silky gelato that changes with the seasons.

It’s right there in the name: Abbondante. It means “abundance” in Italian, and this lyrical, musical word (say it aloud and you’ll see what I mean) perfectly captures the essence of the food. It’s rustic and rich, full of big flavors and fresh, local ingredients. It makes you want to take big, hearty bites, devouring the perfect little orrechiette shells by the forkful (orrechiette translates to “little ears,” another unexpected loveliness of language). It’s food for a winter’s night, when the wind boxes your ears and sets something internal off-balance. This is food that sets you right again.

Stepping inside Abbondante, I’m greeted by a series of rustic, simple touches: a black and white checkered floor, wicker chairs in cheerful red and blue, and a big stone fireplace roaring happily with flames. On the dark gray walls, quotes from various celebrities, chefs, and famous locals extol the virtues of carbohydrates, alcohol, and home cooking. Jars of handmade pasta line the shelves and obscure the view from the window. But just as I’m beginning to feel as though I’ve stepped back in time to some old world Italian joint, where glamorous mobsters sip carafes of wine in a back room and talk shop, I hear some familiar notes. “Heart skipped a beat,” sings the XX, and I’m thrown back into the twenty-first century, where indie pop plays comfortably alongside quotes from long-dead movie stars, and things once considered stuffy and old fashioned are now called retro.

Like the decor and the ambiance, the food at Abbondante plays jump rope with that blurry line between traditional and modern. “There are methods and tricks and old school ways of cooking,” explains chef David Rossi. He knows these tricks, having spent years learning from Italian chefs in the famous North End neighborhood of Boston. Originally trained in French fare, Rossi traded one continental country’s cuisine for another when the opportunity to work at Lucca, an upscale eatery in Massachusetts, opened up. Years later and miles north, Rossi is still cooking sauces the way he was taught, the “way Italian grandmothers make sauce.”

“With Italian food, sauces are your passion, and you don’t want to stray from your recipe. Your recipe needs to stand the test of time,” explains Rossi. “If we’re going to do pickled peppers in our sauce, we never want to move away from that. You just don’t make modifications on it.”

While many of their sauces do feature pickled peppers, a nontraditional touch on a menu dominated by Italian American classics, the most delicious sauce out of all Rossi’s creations is doubtless the simple, naturally sweet marinara sauce. Served with slivers of fresh basil atop a bed of ricotta ravioli, it’s surprisingly light and summery. But like all the pastas here, it’s also rich and hearty.

“I had always wanted to open a place with big portions that you can eat family-style,” Rossi tells me after the meal. My dining companion and I had already stumbled into the best way to enjoy Abbondante’s rustic fare: by reaching across the table, fork in hand, to spear a piece of meatball or twirl a messy nest of pasta. We started with an order of calamari, sautéed with olives, capers, tomatoes, garlic, and Rossi’s signature pickled peppers. Unlike many restaurants, which serve their calamari smothered in oil and batter, Rossi opted to do something slightly different. “You see it fried up everywhere, but when you cook it with olive oil and garlic and shallots and herbs, it really soaks up the flavor.” The result is a dish full of Lilliputian octopuses, tiny tentacles that cling to sauce. This appetizer has so much flavor, and so much texture, that I find myself, in the words of my boyfriend and dining companion, “stealing” repeatedly from his plate. I prefer to call it sharing.

True to form, the wine list at Abbondante functions as a showcase of Italian regions, with a few American wines peppered in. “We didn’t want to focus on just southern wines or Tuscan wines,” says Rossi. “Each area of Italy invokes a different season here in New England—and a different mood.” In the summer, wines of the Mediterranean seem fitting and fresh, but as winter deepens, Rossi’s list moves north, to deeper, bolder reds. Some of the current favorites include a 2011 Santa Giustina Barbera, and the complex and tannin-rich Valpolicella Ripasso, both of which come from northern (and northeastern) Italy.

After our first course of calamari and bruschetta comes an order of gooey, doughy garlic bread. Served in a small cast iron pan, this dish is absurdly simple—roasted garlic, melted cheese, and soft pillowy bread—yet like the unadorned marinara sauce, there is something endlessly appealing about the marriage of ordinary things. Caprese salad, garlic bread, margherita pizza—these dishes have been smoothed by time, made familiar and homey. There are few wild surprises to be found in a plate of spaghetti and meatballs (or, at least, there probably shouldn’t be). But eating good food, like watching a truly skilled athlete, is something that does not get old. Even in our age of restaurant proliferation and gastronomical feats of showmanship, there is still a place at my table for thin slices of eggplant, breaded and baked in tomato sauce with sharp parmesan and sweet balls of fresh mozzarella.