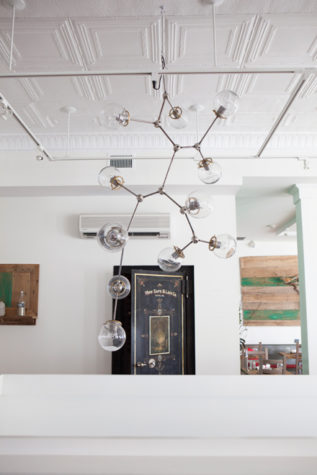 Light fixtures such as this one, built by Josh Hixson himself, add modern flair. 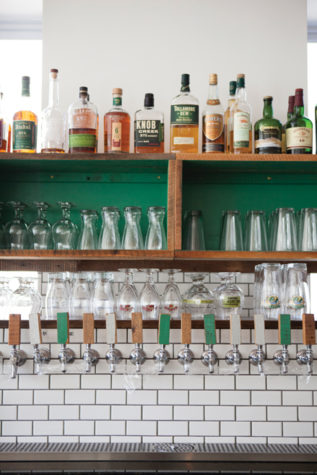 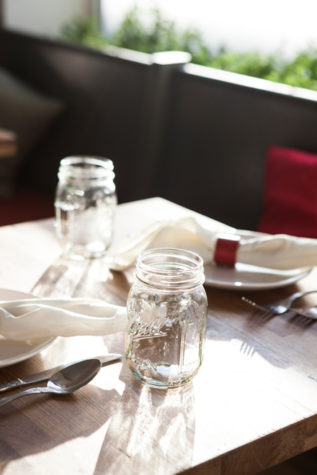 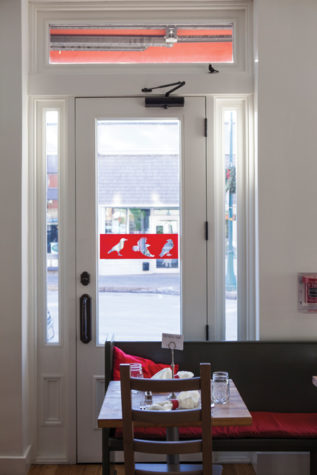 The original Three Crow Brand lives on in spirit. 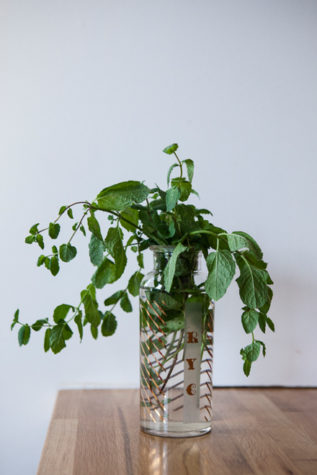 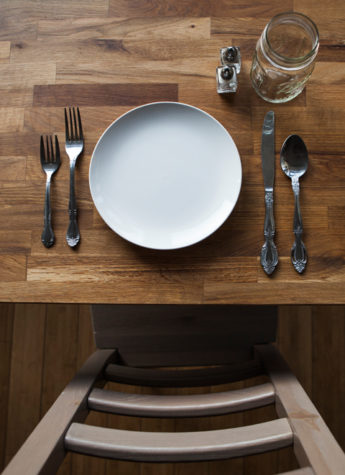 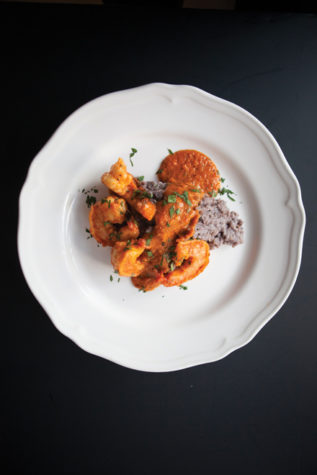 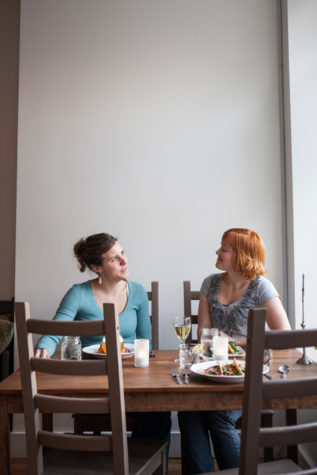 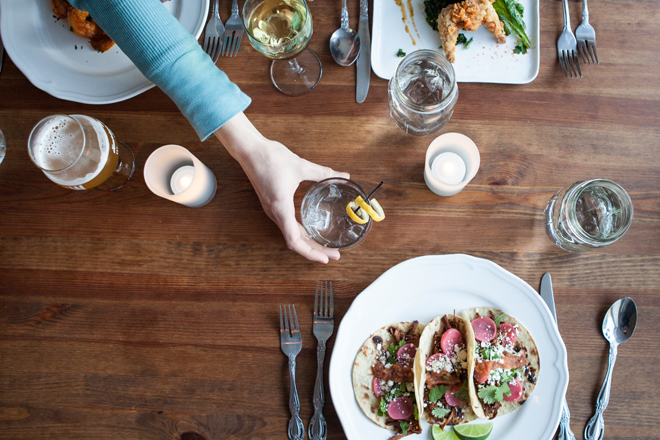 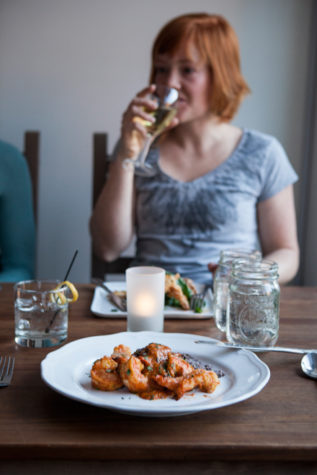 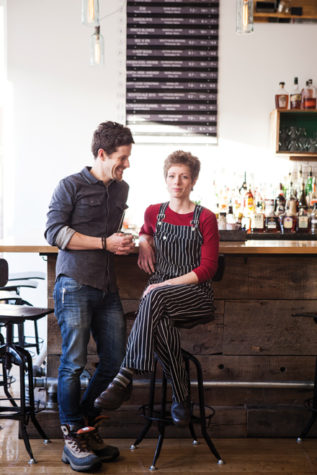 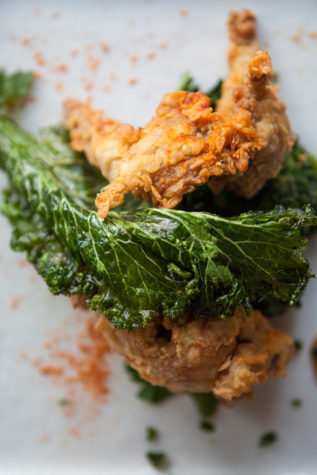 The colorful history of Rockland’s 3Crow is best pondered over a plate of crispy fried chicken and a glass of sweet, mellow bourbon. You too can be part of the story.

In the 1907 book Special Edition: Rockland, Camden, and Environs, the John Bird Company, who inhabited the same building in Rockland as 3Crow over 100 years ago, is described in detail:

“As wholesale grocers and manufacturers it enters into the very heart of the business, roasting its own coffees, grinding spices, manufacturing patent medicines of its own recipes, sodas, and flavoring extracts, and is the largest distributor of cream tartar in Maine … On all its own manufactures the company uses its trademark, Three Crow brand, and associated with this brand is a guarantee of reliability, pure material, and high grade goods.”

Such is the foundation on which chef/owner Josh Hixson has built his beer and whiskey-centric temple of Southern-influenced cuisine, and upon exploring its halls one will encounter many bits of paraphernalia bearing the old Three Crow Spice Brand logo. Tremendous care has been taken to preserve the original look and feel of the building, such as the restoration of the original doors and a sink in the downstairs hallway made entirely of brick. When I inquire how Hixson managed to keep the decor both historically accurate and modern at the same time, he gives me a few examples:

“An old house was razed a couple of blocks away, and we were able to save much of the original wood, siding, and beams. After pulling out all of the square nails, and cleaning it up a bit, we repurposed it around the restaurant. The texture and warmth of the dark wood imparted a beautiful contrast to the white walls and high tin ceilings.”

Hixson built the contemporary metal light fixtures himself, as well as a “living wall” dotted with a plethora of vegetation. A large staircase divides the room and gives a more intimate feel despite what is actually a sprawling dining area.

A first glance at 3Crow’s menu reveals modern American cuisine with a pronounced Southern influence. Hixson was born about three hours west of New Orleans, although he spent his formative years in Hawaii and Tennessee. Regardless of the family’s location, he recalls, his mother would generally prepare Southern classics like gumbo, etouffee, and jambalaya for family dinners. At 3Crow, these same comfort foods are refined using the best ingredients that he can get his hands on, allowing for variation on the overall theme.

A prime example of this is the Fish “Ribs,” made from the rich, meaty collars of whatever species the local fishmonger has available any given day. After the fins, gills, and scales are removed, the fish is oiled and seasoned before being tossed on the grill and basted with bourbon BBQ sauce. The result justifies the name, as the experience of eating them is not unlike tearing into a rack of pork ribs.

Of particular pride to Hixson is his fried chicken, for which he uses free-range birds that are rested overnight in molasses brine before being cold-smoked for about an hour. Then, the chickens are almost completely finished in a pressure cooker and are seasoned while they cool off. As tickets come through, each order is dipped in buttermilk and dredged in seasoned flour before being quickly fried and served with a generous portion of spiced honey. The texture of the resulting crust has a nice balance, and the meat is tender and smoky.

While some dishes are unapologetically decadent, such as roasted Brussels sprouts with bourbon caramel and pork belly scraps, others take on an uncanny complexity from unique products, like Hixson’s take on shrimp and grits. Although they are laden with the traditional brown butter and flecks of spicy chorizo, the grits are made from Cherokee blue corn, indigenous to the Carolinas, which gives them a pleasant earthy fragrance and allows for more variation in the grains. There is also a very traditional Mexican-style taco on the menu, which is augmented in the Southern style by use of barbecue pork and pickled onions.

Hixson admits, “We try not to pigeonhole ourselves into one cuisine.”

Tara Barker, Hixson’s wife, who is also pastry chef and co-owner, is widely known for her dedication to producing superlative confections that are all gluten-free. There is even a separate kitchen devoted to keeping all of the food within these parameters, and most of the menu is available as such. I will say without hesitation that one does not miss the gluten in any of her slightly retro desserts; the luscious textures and intense flavors in her chocolate cake don’t allow the mind to wander to the flour-rich desserts of my past.

Justin Mineo, founder of a company called beer-in-danish that offers craft beer tours of Denmark, heads up the bar program. It focuses, as previously mentioned, on beer and whiskey. A majority of the draught brew selection represents producers from Maine that are responsible for the most recent “beer renaissance” taking place throughout the state. He was excited when Hixson expanded the original plan of twelve taps to fourteen (with two additional for wine). “I’m completely enamored by the flavor spectrum of craft beer, and even after many years of tasting I still find myself being surprised by something I’ve never tasted before on a regular basis,” he explains. “My focus with the beer program at 3Crow is twofold: first, I want to highlight the best of regional craft brewing by dedicating taps to select breweries, and in addition to this I want to provide a broad range of styles from breweries outside of Maine, from as far away as Denmark. I think our beer list is an unpretentious but savvy collection of selections meant to cater to palates of all types.”

The whiskey offerings are primarily bourbon, as both Mineo and Hixson felt that the sweeter, mellower style was the most appropriate when it came to pairing up with most of the menu. This doesn’t mean that lovers of the Irish and Scotch varieties are left out in the cold, as was evidenced by my hefty glass of Redbreast 12-year Single Pot Still on a recent visit to the bar.

“I’ve always thought of the midcoast community as one of the best food scenes in the state. Both Camden and Rockland have amazing food choices, which run the entire gamut from French to Spanish to Japanese, all serving food made with care and love. I wanted to create a restaurant that focused on American food, and drawing on a cuisine I grew up with seemed like something this area would really respond well to. In short, our main focus is simple – food, whiskey, and beer. Those are our three crows.”