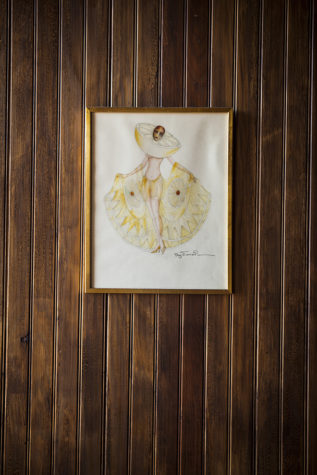 Art by Kay Turner, made in 1917, salvaged from the Eastland Hotel, Chef Brian Hill at Shepherd's Pie in Rockland, Hill opened in 08/09 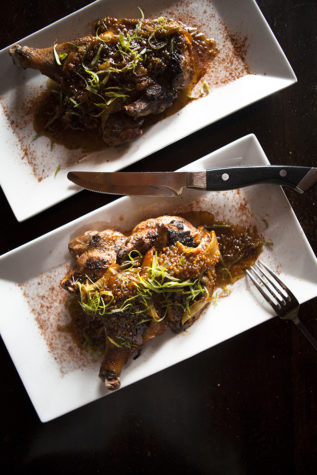 Barbecued local chicken with a cider glaze, mustard seeds, and pears. The idea behind this dish is Maine-style BBQ chicken. Hill discovered that Maine used to serve BBQ at community functions- the hallmark of Maine BBQ is apple cider vinegar. Chef Brian Hill at Shepherd's Pie in Rockland, Hill opened in 08/09 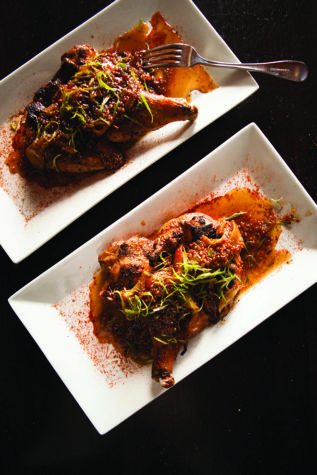 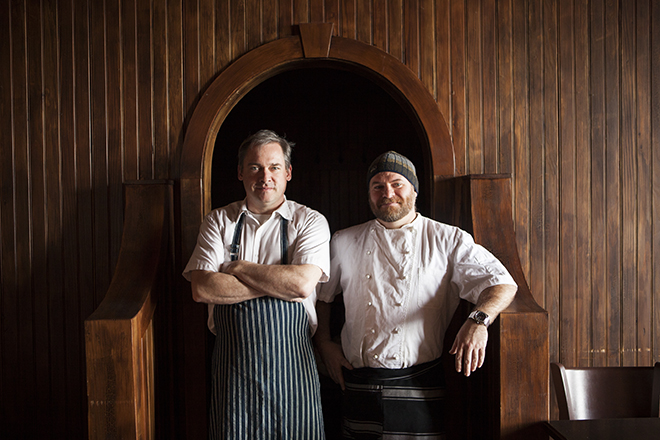 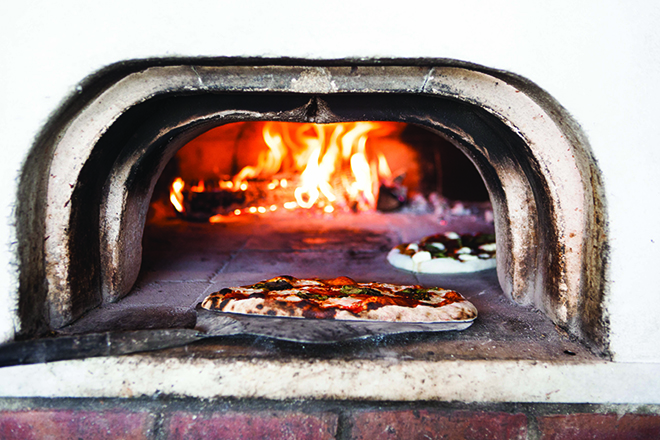 Pizza finishing in the wood-fired oven at Seabright. It took Hill six years to perfect his pizza dough recipe.

Chef Brian Hill at Seabright, opened in 2013, a wood-fired pizza joint in Camden. It took hill 6 years to perfect his pizza dough recipe 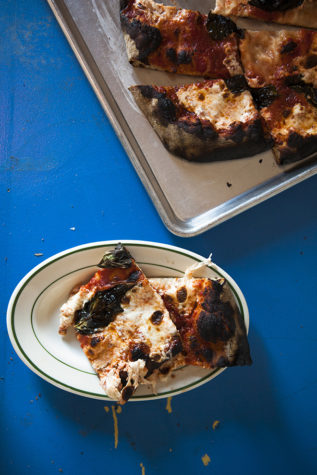 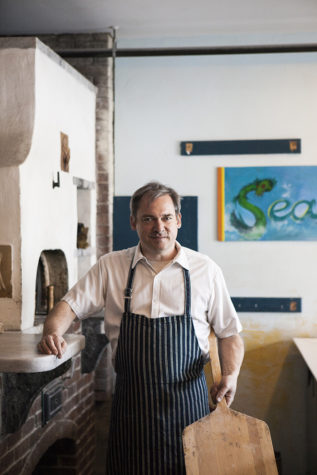 Chef Brian Hill at Seabright, opened in 2013, a pizza joint in Camden. It took hill 6 years to perfect his pizza dough recipe. 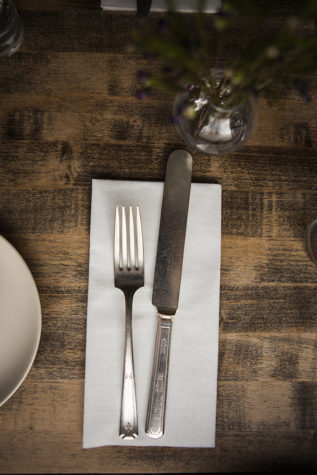 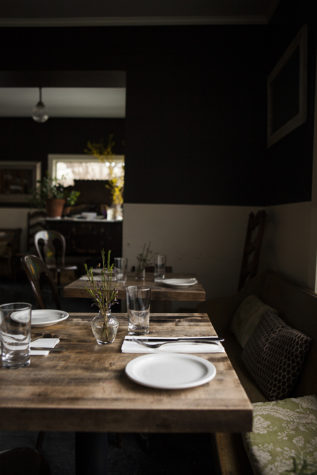 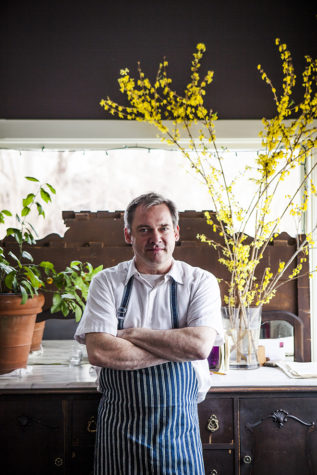 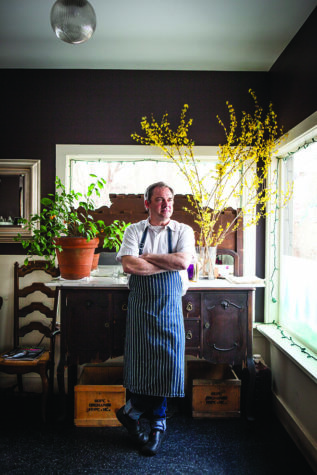 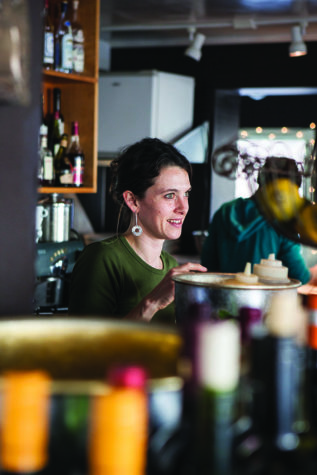 Hill's three restaurants have contributed to the cultural renaissance in the midcoast. 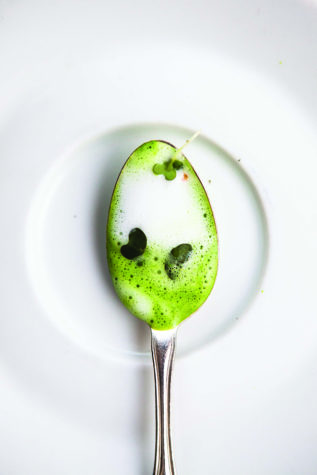 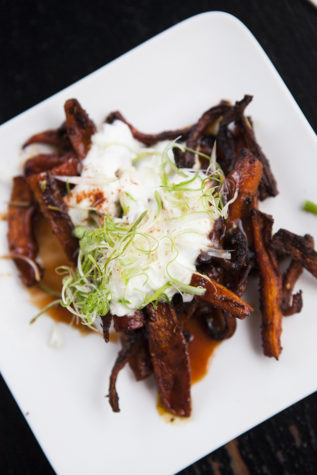 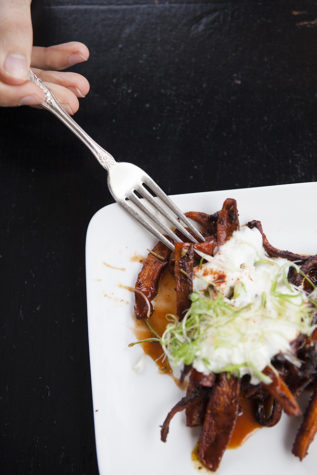 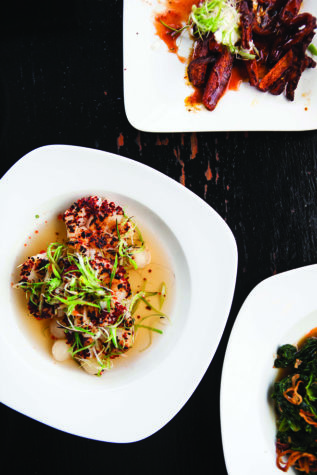 An assortment of Hill's culinary creations 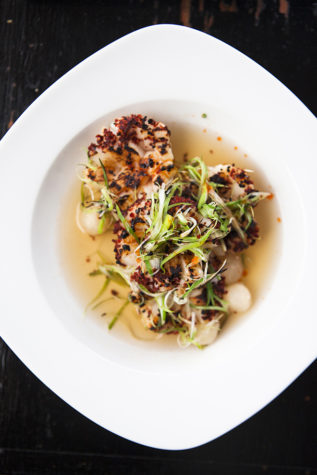 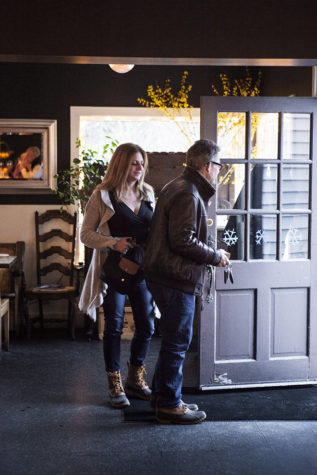 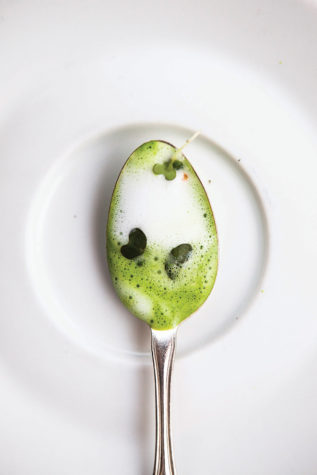 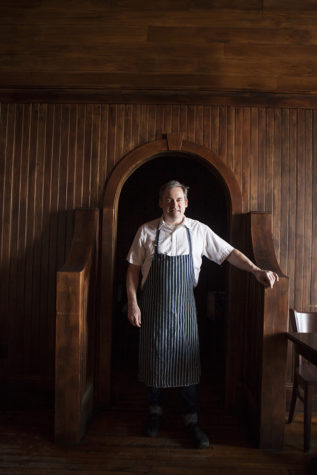 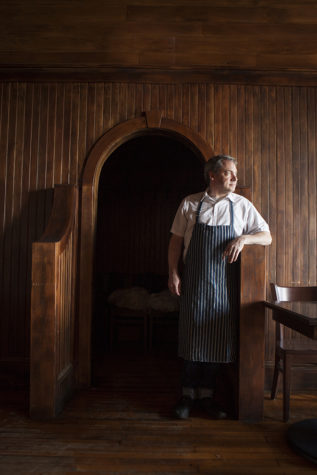 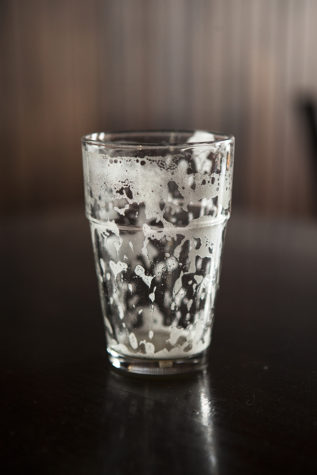 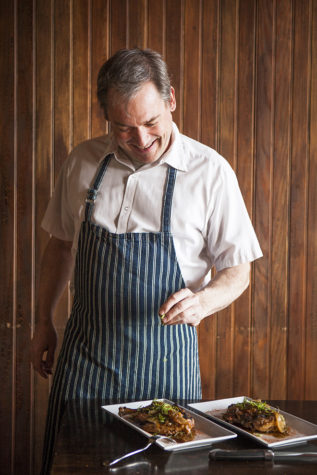 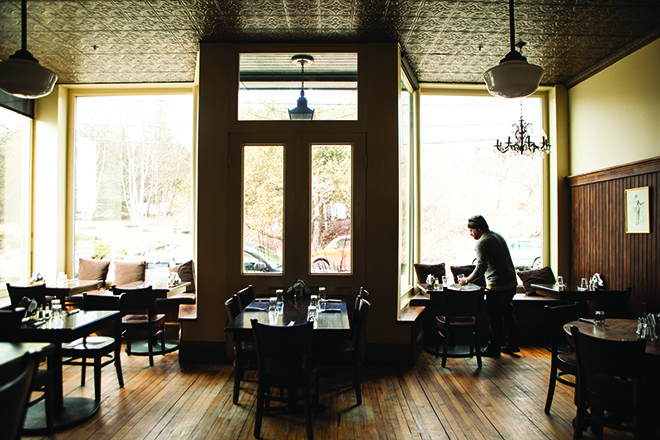 Inside Shepherd's Pie in Rockport 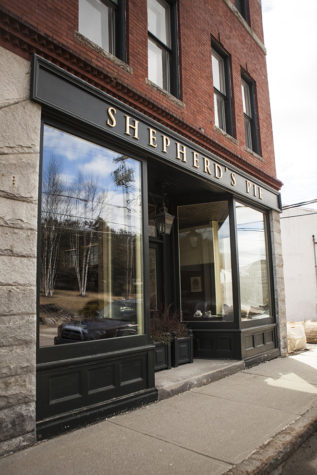 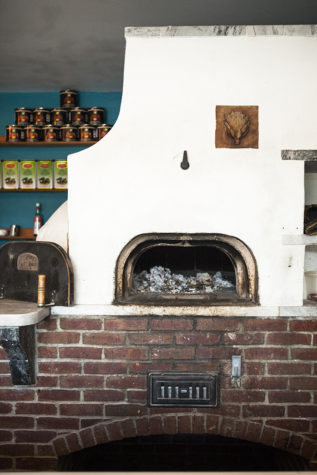 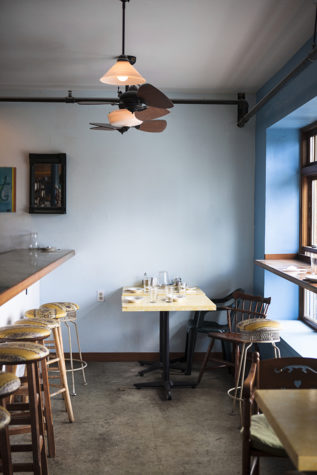 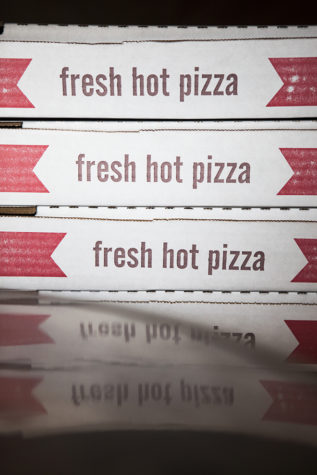 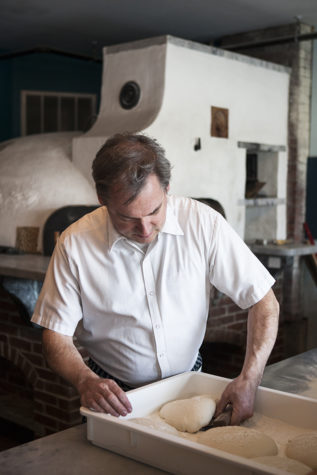 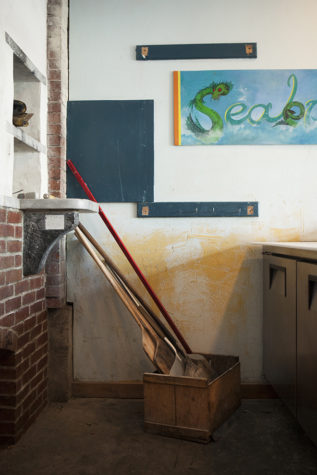 Brian Hill has become a Maine culinary icon; he now runs three ventures in the midcoast, including his most recent addition, Seabright Pizza. But the best way to get a glimpse into the inner workings of the mind of the chef is to dine at his original eatery, Francine Bistro. It is here that Hill’s talents flourish, adapting to whatever challenges come his way. My first meal there served as a culinary biography far superior to any I’ve ever read.

Hill, who grew up in Warren, got his start in 1992 making loaves of focaccia and Tuscan bread at Todd English’s Boston institution, Olives, before being offered a position making pizza at its sister restaurant, Figs. At the time, Barbara Lynch had just moved on from the position as head chef, to be replaced by Sara Jenkins, who now owns both Porchetta and Porsena in New York City. Hill recalls that this was very challenging. “But I learned thin-crust pizza craft working with a screaming hot brick oven, how to prep cook, and how to move really, really fast.” Chef English was often in the kitchen then. He took a liking to Hill and encouraged him to persevere through the challenges of the kitchen although he had no formal culinary training.

A year later Hill moved to Los Angeles to further his cooking experience, only to return to be chef at Figs four years after that. Eventually, he found himself at Aquitaine in the South End of Boston, where he remained until he departed for New York City to cover for Sara Jenkins at the now-defunct Patio restaurant in 2002. “This is when the gears began to turn”, as Hill puts it. ”New York was incredible and the foraging at the Greenmarket was really cool,” he says. But it just seemed that food in Maine just tasted better and was even fresher than the Union Square Market.

After his time in New York was up in 2003, Hill took a drive up to Camden to scout out a space that formerly housed a coffee and sandwich shop as a potential home for Francine. The proprietors of the store, which came equipped with only an electric hot plate as a stove, were looking for help, so Hill set up shop as quickly as he could.

“My first night I cooked elvers (baby glass eels) with burnt garlic and hot pepper,” Hill recalls. ”The second night I did a tasting menu for chef Sam Hayward from Fore Street only using the electric hot plate.”

Inside Shepherd’s Pie in Rockland

In 2005 Hill constructed a full kitchen at Francine, complete with two stoves, a deep fryer, and an appropriate hood system, in addition to adding 15 seats to the dining room.

“I really tried to keep the characteristics of a small French restaurant, complete with lots of dysfunctional mirrors, crooked church pews, the upside-down Guinness paint job, and twisted bathroom decor,” Hill explains. “The room has a lot of wood furniture, a wooden bar, and good music that is audible.”

The first glance at Francine’s menu reveals a diverse collection of dishes, with influences ranging from the cookery of Southeast Asia to that of the deep American South. There is always at least one soup on the menu, although Hill will openly admit to hating soup, and a handful of salads adorned with eclectic ingredients like lamb belly, fried cheese curds, and bottarga. Other constants include local chicken, steak frites, and ribs, while the selection of fish and crustaceans is ever changing. When I inquire about Hill’s cooking style, his response is simple:

“Years ago I heard an interview with Tom Waits where he described Prince as an exotic bird and a great recycler of music. I think of myself as a recycler of the many dishes I have cooked, seen, or tasted. I have a good flavor memory and rarely forget anything. The other thing that motivates me is knowing freshness and the true character of many types of food. A cucumber straight from the garden tastes nothing like one that has spent a day, or a week, in the walk-in.”

One of the best examples of Hill’s complex flavor profiles is the chicken at Francine. Procured from a friend in Warren, the birds arrive at the restaurant on the same day they are slaughtered, usually before they enter rigor mortis. After boning out the chickens in what Hill describes as ”Hawaiian hibachi-style,” they are placed in piquant garlicky brine flavored with lapsang souchong, a Chinese style of tea that is smoked over pinewood fires. Upon receiving an order, the chef rubs the birds with sea salt, herbs, and mushroom powder before roasting them skin-side-down in a large cast-iron pan. Occasionally, Hill will add a stuffing of lemony ricotta cheese under the skin of the bird before garnishing with smoked mushroom syrup.

Like many chefs and gourmands, Hill has a distinct affinity for tripe, the spongy stomach lining of the cow. He relishes the challenge of working with an ingredient that begins so tough it is almost like shoe leather and turning it into something wonderful. He likens the challenges of its preparation to that of eggplant, which he has special disdain for unless the cook actually knows how to prepare it. When it comes to eating tripe, he admits to always ordering the Dac Biet version of Vietnamese beef noodle soup and pretending, via the traditional Chinese Medicine theory, that “simply consuming it will actually augment my own method of preparation.” The actual tripe on the menu is far from this style, however. Taking influence from New York chef Andrew Carmellini, it is cooked in a rich tomato sauce before receiving a showering of high-quality Parmesan cheese.

As with the tripe, Hill continues to draw inspiration from Eastern philosophical thought with his approach to cooking fish, citing a quote from Confucius: ”Ruling a large kingdom is like cooking a small fish.”

Pizza finishing in the wood-fired oven at Seabright Pizza.  It took Hill six years to perfect his pizza dough recipe.

No dish at Francine is an afterthought. This becomes apparent when the first basket of focaccia is placed on the table as I peruse the menu. So often this style of bread is drowning in a sea of mediocrity, but Hill starts with cold-aged pizza dough and adds red onion, pears, hunks of cheese, herb oil, and honey. The wet dough bubbles up when it is baked and yields a very moist, creamy interior.

Even the carrots are special, as Hill utilizes sweet, earthy Chantenays that have been in cold storage for at least two months. He quarters them, gives them a douse of superlative olive oil, covers them in a spicy brown-sugar barbecue rub, and roasts them until nearly burnt. Before serving they are glazed with Pakistani ginger-lime pickle, honey, and a bit of ketchup before being crowned with what Hill refers to as “a creamy yogurt antidote.”

The painstaking attention to detail with each and every dish that leaves his kitchen has allowed Hill to build a strong enough customer base in the midcoast to support three restaurants there. In 2010, as Francine continued to flourish in Camden, Hill was presented with an opportunity to open a neighborhood pub in neighboring Rockport.

”The vacant historical building was called the Shepherd’s Block, so the name ‘Shepherd’s Pie’ seemed like an ideal moniker, especially for a Maine restaurant,” Hill says. He explains that originally the concept was very basic. “The place was supposed to be so simple, organic hot dogs and organic hamburgers, until we freed up a budget for a big wood grill, which got me thinking about barbecued duck, grilled halibut, pork belly sandwiches, and lamb shank shepherd’s pie. So basically I ruined the simple idea, but my chefs, Mark Senders and Patrick Duffy, make beautiful food in a beautiful restaurant and I wouldn’t change a thing.”

Hill’s third restaurant, a Camden pizzeria called Seabright, came to fruition in 2013 and is located right downstairs from Hills apartment. After noting that the spot, which formerly housed another pizza place, had remained vacant, Hill took action and contacted the landlord. In no time Seabright Pizza was a reality.  “I dream about making pizza,” Hill says. ”I love making it. I love eating it. We had been working on a very different, and quite amazing, dough recipe for six or seven years, which produces a light and soft crust with a good bite to it, which is blistered from intense heat.”

Even amid all of these exciting new ventures, Hill always finds himself back behind the line at Francine. He insists that he needs to be there for the restaurant to stay up to his standards, and it drives him crazy to have to be away from it. His fiery obsession with constantly elevating the quality of his food is readily apparent in each and every dish on the menu, and served in one of the coziest, most well-loved dining rooms in Maine. It would seem that the patrons share Hill’s opinion that he needs to always be at Francine, as the sight of him at the stove instills security and assures them that this meal will be as high-caliber as the one before it. I have personally witnessed one of his regulars start to get misty-eyed while trying to describe how much he loves the chicken, insisting that any visit without it would be on par with the ultimate sin. You don’t see that kind of fanaticism often, but I can tell you it is a very, very good sign.