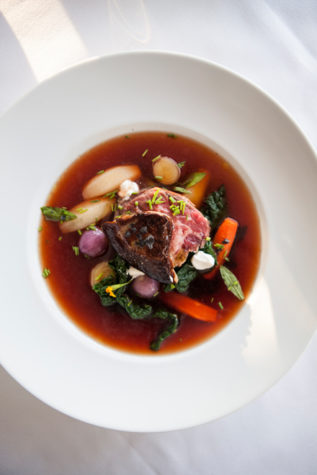 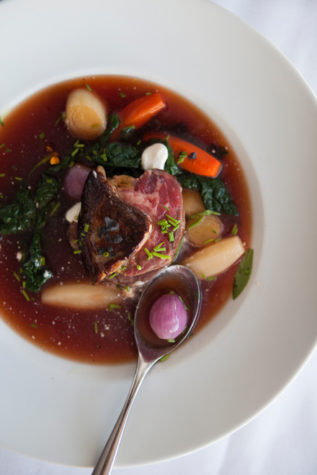 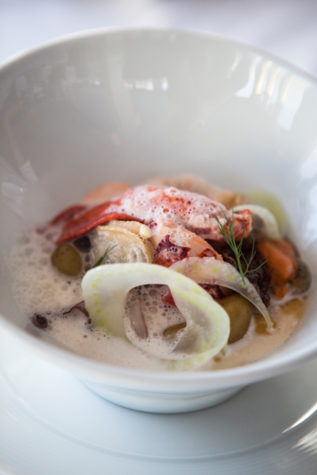 The bounty of Maine waters.

Take on French dish bourride- made with a variety of local seafood, light fish stock thickened with aoili and fresh fennel 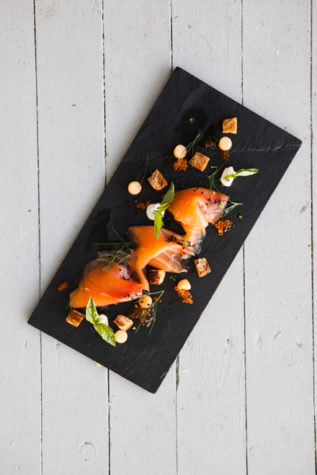 A plate of cured salmon. 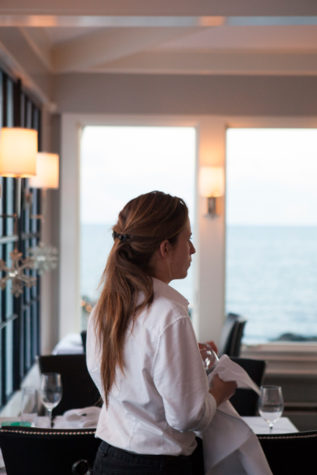 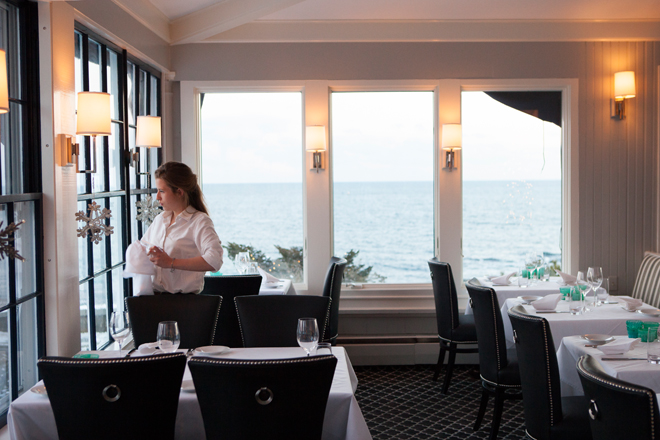 There's not a bad seat in the house at Ocean, where one can see the water from every angle. 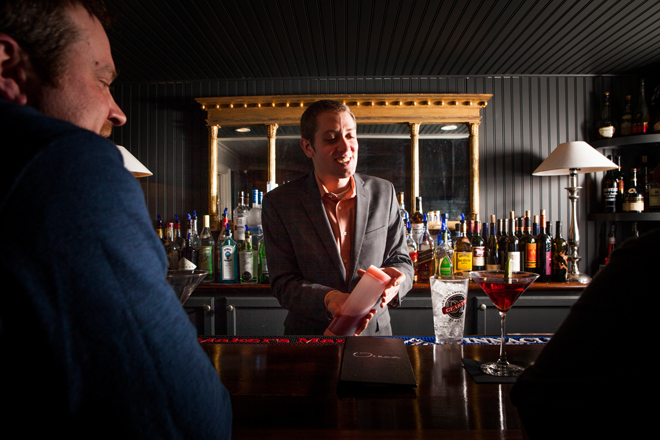 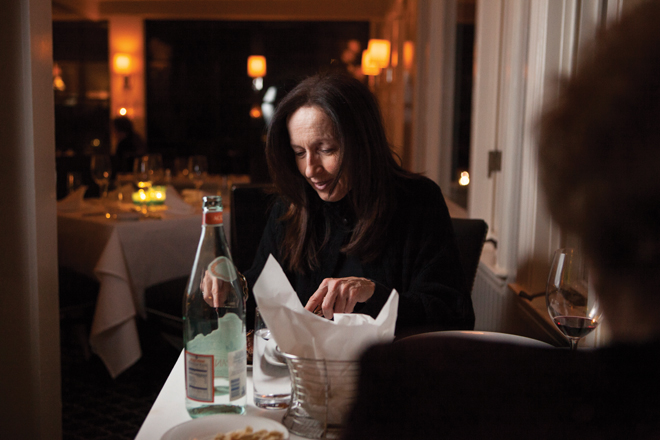 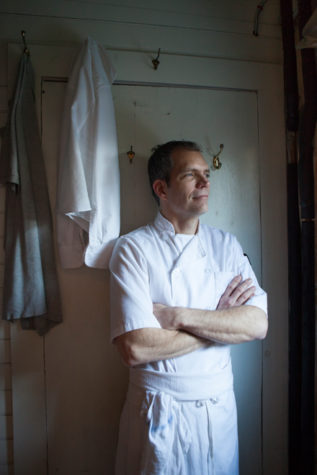 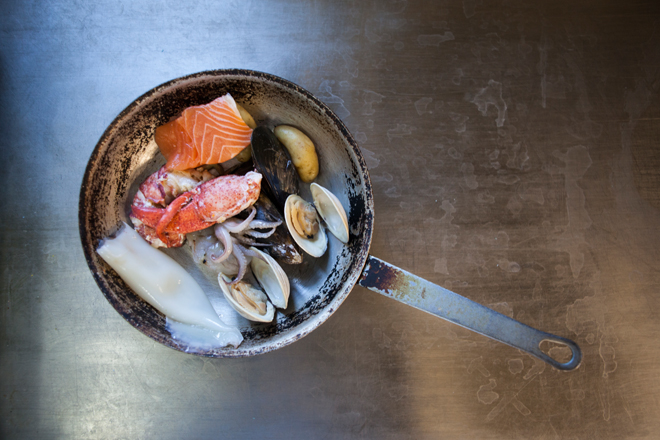 Ingredients for the seafood bourride

It’s a sad fact of modern dining: over the years, many wonderful, classic French dishes have fallen by the wayside, forgotten or misrepresented. Cuisine that was once the pride of the world’s finest hotels and luxury ocean liners is all too often relegated to subpar banquet tables, the victim of so many cut corners that once-elegant dishes have become unrecognizable.

But now we have a French redux with Ocean, where chef Pierre Gignac seeks to restore the status of these classics. Using the best local ingredients, Gignac creates updated yet true-to-form interpretations of time-honored dishes like Lobster Thermidor and Pot au Feu.

Housed in the iconic Cape Arundel Inn and Resort, the dining room at Ocean, designed by Louise Hurlbutt, features stunning panoramic views of the Atlantic from every table, a backdrop that is both soothing and mesmerizing. Clean, modern, and comfortable, the décor cleverly brings in colors of the ocean, with seaglass-green votive candles on every table, and misty seascapes hung on the walls.

It seems fair to say that Montreal native Gignac has restaurant life in his blood. After attending hospitality school at the Institut de Tourisme et d’Hôtellerie du Québec, he went on to apprentice for French and Italian chefs in Canada before continuing his professional career alongside a number of German and Austrian chefs in Winnipeg. Following extensive travels in both Europe and Asia, Gignac and his wife were approached by his sister and brother-in-law about starting up a bistro in Ogunquit. This was the beginning of a partnership that would last almost two decades. In 1995, 98 Provence opened its doors, establishing itself as a popular dining destination. For 18 years, Gignac continued to impress restaurant patrons with his southern-style French fare, but wanting to move on, he landed a position at the Cape Arundel Inn, where a year ago, he oversaw the opening of the French-inspired fine dining restaurant.

Gignac’s dishes feature very clean, defined flavors marked by skillful preparation. A close look at the menu reveals much about Gignac’s culinary influences. The Rabbit Stew a la Moutarde, for instance, was the first dish that he learned as an apprentice at Chez La Mère Michel in Montreal. Gignac describes the dish fondly, asserting “Rabbit probably delivers the most satisfying flavor when it’s stewed, on the bone, after marinating the meat. When finished with both Dijon and grain mustard, it’s like heaven on a plate!” The dish also incorporates Italian influences, featuring sheets of hand-cut pappardelle pasta as well as broccoli rabe for a touch of bitterness.

The combination of superlative local ingredients and traditional preparation shines through in Gignac’s interpretation of Lobster Thermidor. The lobster is cooked in its own shell and dressed with a flavorful cream sauce with fresh artichokes and local oyster mushrooms. The use of the cream sauce is an update from the traditional, much heavier, béchamel. This slight update imparts an ethereal nature to the finished product while preserving the rich flavor of the original dish.

Pot au feu, which translates, as “pot on the fire,” is a traditional French peasant dish that involves cooking meat and vegetables in a pot for hours until the humble ingredients are magically transformed into a delicious stew. “Poaching meats is a difficult thing,” says Gignac, “but when prepared well, it delivers an incredible consommé that is enhanced with all of the wonderful vegetables and aromatics.” Seeking to make the dish more accessible, he use a familiar cut of meat like beef short ribs, while adding flair by coloring the broth with red beets and incorporating a touch of foie gras “for good measure.” This modern addition enhances the richness and adds surprising depth of flavor to the “peasant” dish.

Other archetypal French dishes like Bouillabaisse are reminiscent of menus at 98 Provence. The version at Ocean is driven, justifiably, by lobster but features any fresh seafood that Gignac can get his hands on. This hauntingly aromatic stew is flavored with fennel, orange, and anisette, and accompanied by the prerequisite rouille, a puree of roasted peppers, garlic, and bread. In addition, Gignac also handles the pastry department, which features everything from tarts and cakes to ice cream. And the breads too, “are freshly baked at our commissary bakery,” Gignac adds.

The dining experience at Ocean is warm and casual, with unhurried, informative service that reflects Gignac’s enthusiasm for the cuisine. It is easy to get completely caught up in the majesty of the view, and you may be inclined to enjoy an after dinner libation on the front porch to prolong the romance. This is, after all, one of the most beautiful parts of Maine, so it is prudent to take full advantage.

For Pierre Gignac, the Cape Arundel Inn already feels home. “After so many years working in the kitchen, I feel honored and privileged to have ended up in such a beautiful environment. Ocean is a very unique restaurant that brings out the best in me and inspires reverence, attention, and dedication.”

It is safe to say that his customers feel the same way.