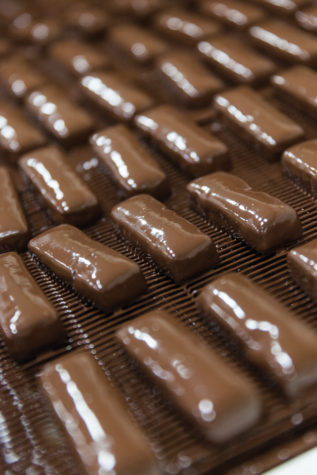 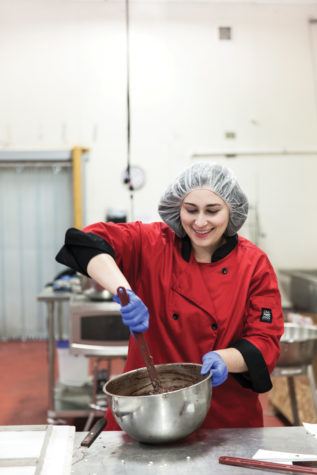 Despite all there is to do at the desk, youll find Kate McAleer handmaking Bixby bars. 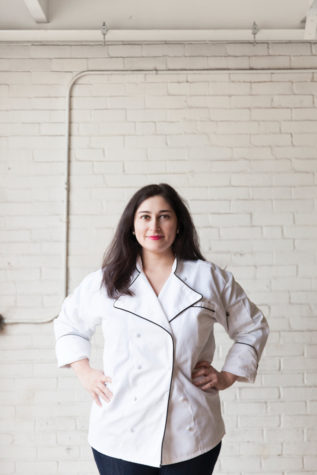 Chocolatier Kate McAleer stands ready for the next challenge. At 27, she's hard at work building a business on the ocean's edge. 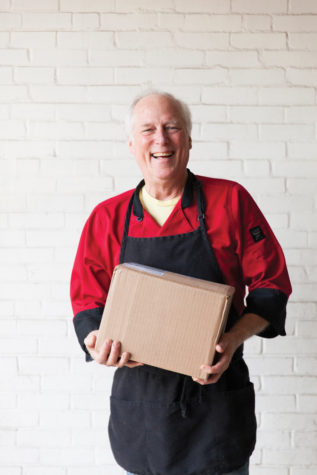 Gordon McAleer, Kates father, is embarking on his second career as a candy maker. 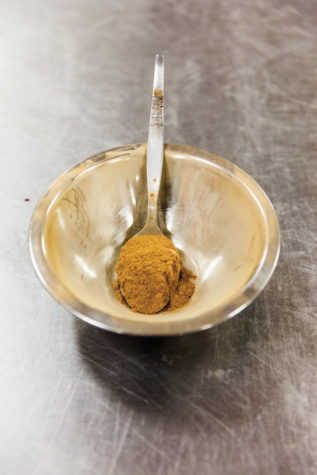 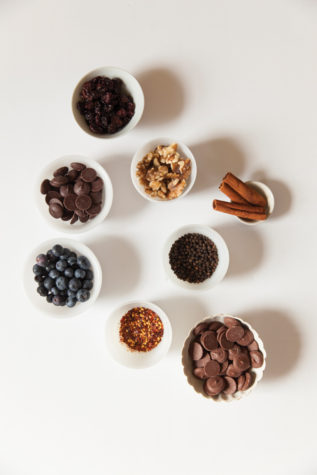 Unlike many candies made in the United States, McAleers bars are full of real fruits, nuts, and spices. 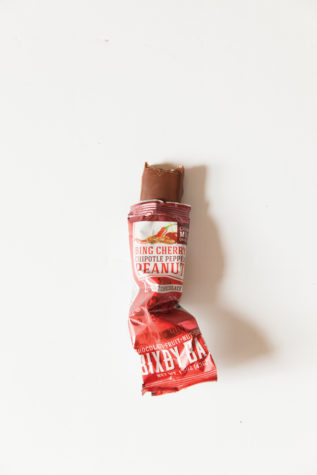 With chewy, tangy cherries and salty peanuts, the Knockout milk chocolate bar is a Bixby favorite.

I drive past the Strand Theatre, the lamp-lit shops, and crowded cafes of Rockland, turn right at Tilson Avenue, hang a left past the Coast Guard Building onto Sea Street Place to find the Bixby and Co. headquarters. What I step into is no Willy Wonka Chocolate Factory, but rather a cozy office space cluttered with papers and computers and overtaken by a large table around which sit 27-year-old entrepreneur Kate McAleer, founder of Bixby and Co., and her mother, Donna McAleer.

Kate beckons me into the room like an old friend while finishing up a conversation with a distribution company representative. He is making his pitch, answering the McAleers’ refrigeration-related questions. (Bixby chocolate, unlike most American-made chocolate, is perishable at 70 degrees. It is also organic, non-GMO certified, vegan, gluten-free, youth trade and rainforest alliance certified… the list goes on.) Kate’s tone is confident and kind. She is warm and direct without a trace of pretense in her demeanor. I get the sense that she is too busy to be anyone but herself, and this, like the breeze blowing around the former ice factory that is now home to Bixby and Co., is something I find very refreshing—and also very impressive. But then there is a lot to be impressed about when it comes to Kate McAleer.

McAleer traveled extensively as a child, and, in college, spent time abroad in China and France, where her interest in candy came into focus. In France, McAleer was exposed to candies of a new caliber. Chocolate, in particular, is made with higher levels of cacao in Europe. After graduating from New York University with a degree in East Asian studies and minors in art history and French, McAleer began graduate work at the New School in 2009, studying the history of decorative arts and design. She enjoyed the program and the coursework, but she began to feel that the focus on art history might be limiting. A year in, she decided to pivot, to go to pastry school and explore food as a medium in which all of her passions might intersect, and even take on tangible, taste-able form.

While at pastry school, McAleer became intimately acquainted with the overabundance of preservatives, additives, and corn syrups in conventional American candy making. Seeking an alternative—for the sake of taste and health—she began to experiment with bar prototypes using chocolate (as opposed to chocolate compound) and real fruits (as opposed to fruit flavorings), nuts, and spices to create the kind of treats she had loved in Europe. While most of her peers were preparing for careers in restaurants, McAleer started to dream of creating her own business. “My mom had always promoted the idea that you should try to control your own destiny,” Kate says. She started Bixby and Co. in December 2011 in the Hudson River Valley. She lived with her parents while she got the company off the ground from a 500-square-foot storefront, where she hand-dipped each and every Bixby bar.

Coincidentally, just as McAleer’s career was winding up, her parents’ careers in the healthcare industry were winding down. Donna and Gordon McAleer had always dreamed of moving permanently to the midcoast, where Kate and her siblings spent summers and weekends, when they retired. For Kate and her family, Maine has always meant fresh air and fresh food. It was a place where people seemed to share their values and small business felt vital. Donna and Gordon were ready for a new phase in their lives, one in which they could spend time helping Kate with her new business venture. And so, in March of 2013, the three of them, along with Bixby and Co., moved permanently to Maine.

Less than two years later, after an original location in Belfast, McAleer is happily settled in Rockland, in a space with extra room to accommodate her growing business. “Let me show you the kitchen,” she says, leading me through dark, industrial rooms piled high with ice-making equipment to a bright white room of chocolate smells, glossy chocolate bars cooling in rows on wax paper, chocolate streaming in silky threads through a melting machine. The high-ceilinged Bixby and Co. kitchen is filled with contraptions for melting, enrobing, cooling, cutting, and packaging. It is here that I meet Kate’s father, Gordon McAleer, who launches into a complicated question about packaging it seems only McAleer can answer.

In the kitchen, McAleer visibly perks up and takes charge. She makes her way over to the packaging machine the family lovingly refers to as “Bix the Dragon.” McAleer purchased it recently, with help from a hard-won Libra Foundation Grant. It means the McAleers no longer have to hand-wrap the bars, and productivity has increased by 1800 percent. I watch as McAleer expertly feeds the wrapper over and under countless pegs and coils, like stringing thread through a complicated sewing machine. The machine’s workings eluded her when it first arrived, just days before she was due to fill the largest-ever Bixby order. “I remember being up at two in the morning crying, trying to figure out how to make it work,” she tells me. “But I simply had to figure it out, and so I did.” Without a minute to spare, the team filled a quarter of a truck with Bixby bars bound for Whole Foods in Arizona, New Mexico, and Texas.

Most folks in the food business are not involved in making the product they sell, whereas McAleer lovingly and thoughtfully developed delicious, real chocolate that she continues to make herself, daily, in addition to running the business side of Bixby and Co. Over the course of three years, McAleer has familiarized herself with everything from the nitty-gritty logistics of distribution to regulatory compliance, grant opportunities, marketing strategies, and so much more. “I simply had to figure it out, and so I did,” could be her mantra. Bixby bars are now sold in over 500 stores across the country. By next year, they’re aiming to have their product in 1,000 stores.

She has not had a weekend off since she started the business, but you will hear no complaints from McAleer. The night before we meet, she kept herself busy until ten o’clock waiting for a local rabbi to come by and inspect the kitchen (Bixby is now Earth Kosher Certified as well). Nothing has been easy. All of the hard work has been worth it.

“I’ve had to grow up fast,” McAleer tells me. But, talking with her parents, who work alongside Kate full-time in their second careers, I get the sense that she’s always been more grown up than most her age. The baby of the family, and quite a bit younger than her older siblings, McAleer was a child who comfortably conversed with adults, who was always observing, listening, collecting information about the world and how to be in it. McAleer cites her mother, a retired healthcare executive, as a role model. The admiration goes both ways. Over and over again, Donna and Gordon express their pride in Kate, and I think to myself that this is the stuff durable family businesses are made of: sacrifice, work ethic, a whole lot of heart. And help. We cannot forget help.

For all kinds of sentimental and practical reasons, the McAleers felt strongly that Maine was a place where Bixby and Co. could bloom. What they didn’t expect, and what they’re still reeling from, is the amount of support they’ve received from people and organizations in their local community and all over the state. The McAleers will tell you, in voices saturated with gratitude and a little disbelief, that the intimate, interconnected state of Maine is an excellent place to start a business.

Credit goes to Kate for seeking these opportunities out, but it also goes to organizations like the Maine Center for Entrepreneurial Development’s Top Gun Program, the Libra Future Fund, Maine Technology Institute, Maine Mentor Program, and Gorham Savings Bank’s LaunchPad program, for offering them. Credit goes to the Strand Theatre, around the corner, for stocking their shelves with Bixby bars and the folks from Cellardoor Winery, who invited Kate to host a tasting months after her arrival to Maine. Bixby bars can also be purchased online or in Maine at stores like the Belfast Co-op, Rosemont Markets, Aurora Provisions, and Lois’ Natural Market, among many others. Here, in Maine, the old adage “business is personal” could not be more true: Kate McAleer’s success matters to so many people. Because Kate McAleer is who she is, and Maine is the kind of place it is, but also because her product is just really damn good.

Before leaving, I taste them all. Dark chocolate bars with wild Maine blueberries, black pepper, and walnuts. Milk chocolate with Bing cherries, chipotle pepper, and peanuts. In a sample of the Whippersnapper, the black pepper arrives late, giving the aftertaste an unforgettable edge. The cherries in Knockout are aggressively real: sweet, sour, chewy, and the perfect contrast to the creamy, salty crunch of peanut. When we get to a bar still in development, one that McAleer is less familiar with, she, too, gives it a try. “Oh, that’s good,” she says, her eyes widening. She glances toward her mother. “This is really good,” she says again. Then together, in a chocolate-induced silence, we both take one more bite.